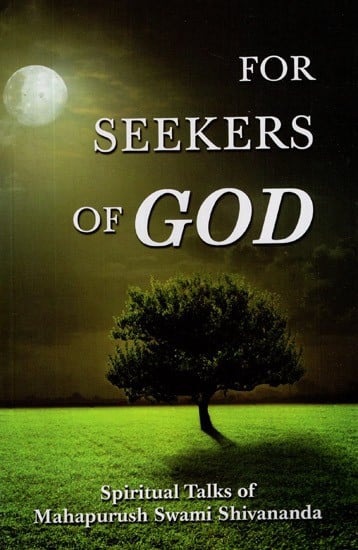 A spiritually illumined soul, who has scaled the depths of the Divine, is a constant source of inspiration to countless other seekers. Mahapursh Swami Shivananda, one of the direct disciples of Sri Ramakrishna and the second president of the Ramakrishna Order, was such a person whose simple conversations with spiritual seekers were treasured by them as unfailing blessings for the rest of their life. This book has brought together such conversations of the good of the many, for the happiness of the many.

Shiva-the beloved and venerated of millions-is supremely unconcerned, and intensely concerned,m about the world. In his illumined life Mahapurush Swami Shivananda evinced this Shiva disposition. Inclined to be indrawn and withdrawn, he was yet anxious for all and at the service of all. By nature of simple habits, he was by divine providence involved in, and for twelve years the guiding light of, a growing, complex organization.

The conversations and descriptive matter of for seekes of God: Spiritual talks of Mahapurush Swami Shivananda bring us into close touch with a saint whose life was indeed hidden away with God in God, while all the time, owing to the circumstances of his presidentaship of the Ramakrishna Math and Mission, whatever was human in that life was, as it were, public property, The Bhagavad Gita, in a few broad strokes, sketches the sthita-prajan, the man of steady wisdom. In the present book we see that sketch filled in, together with the refinements and thejoys of living continuously in the state of illumination.

Some details of Swami Shivananda's life will be found in the Preface to the First Edition, which immediately follows, the Preface to the first Edition, which immediately follows, and others in the /foreword by Swami Vijnanananda, who, like Mahapurushji, was a disciple of Sri Ramakrishna. What is said in those pieces helps us to understand the person whose conversation are recoded in the book. Moreover in this book one can especillay see the mind and feel the heart of the Ramakrishna Order in particular, and of the movement inspired by Sri Ramakrishna in general. Like other books of the same kind this one is abundant with wisdom and inspiration. Mahapurshji's gives his words a rare heart-soothing quality.

The present volume is a translation of the Bengali shivananda vani published in two volumes by Udbodhan Office, Baghbazar, Calcutta. Part I is volume I of the Bengali publication.The first deition of for seekers of God consisted only of this. It was translated by Swami Vividishananda, head of the Ramakrishna Vedanta Centre, Seattle, U.S.A. Part II is volume II of the Bengali book and was translated by Swami Gambhiranadna, now General Secretary, Ramakrishna Math and Mission. It was originally published serially in Prabuddha Bharata, the English monthly of the Ramakrishna Order, from January 1961 to December 1962.

The glossary of the first edition has been expanded; but explanations of most of what may be unfamiliar terms will be found in the text.

We hope that this publication of the complete spiritual talks of mahapurush Swami Shivananda will be welcome by those seekers who cannot read them in the original Bengali.

In The Light Of Wisdom: The Psychology, Philosophy And Practice of Yoga
By Swami Krishnananda
$23.25
Out of Stock
$31  (25% off)

In The Light Of Wisdom: The Psychology, Philosophy And Practice of Yoga
By Swami Krishnananda
$23.25
Out of Stock
$31  (25% off)
Add a review
Have A Question