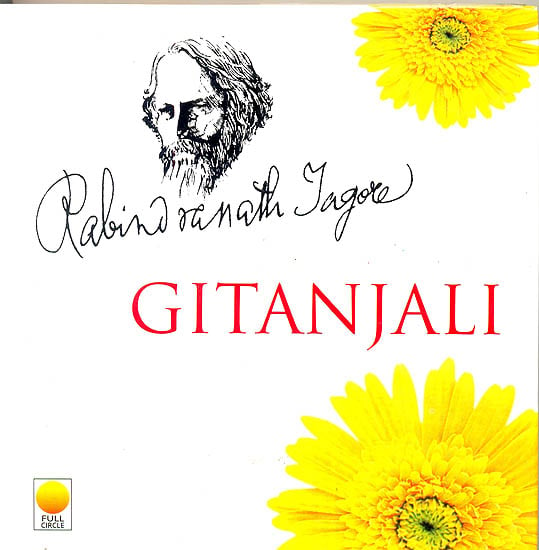 The great Irish poet, W.B. Yeats, had his first brush with the deep-rooted impact of Tagore’s writings when he heard and saw women in the tea fields of rural Bengal singing Tagore’ songs and poems with great fervor.

Yeats was inspired to write an introduction to Gitanjali, which is included in this edition.

Rabindranath Tagore (1861-1941) attained success early in life as a writer in his native Bengal. He won international acclaim in 1911 with the publication of the English edition of Gitanjali --- a collection of over one hundred inspirational poems.

In 1913 he was the first Indian to be awarded the Nobel Prize in literature for Gitanjali, comprising of poems which are an invocation to God. Devoid of aggression and angst, they are like a breath of fresh air, which enlightens the soul.

Gitajanjali’s canvas encompasses life’s experiences with an innocence and simplicity that one does not find elsewhere in literature.

Tagore achieved fame as a novelist, playwright, poet, painter, lecturer, politician and composer. His tours of friendship and amity across continents gave him the privilege of being the voice of India’s spiritual heritage.

A few days ago I said to distinguished Bengali doctor of medicine, ‘I know no German, yet if a translation of a German poet had moved me, I would go to the British Museum and find books in English that would tell me something of his life, and of the history of this thought. But though these prose translations from Rabindranath Tagore have stirred my blood as nothing has for years, I shall not know anything of his life, and of the movements of thoughts that have made them possible, if some Indian traveler will not tell me. ‘It seemed to him natural that I should be moved, for he said, ‘I read Rabindranth every day, to read one line of his is to forget all troubles of the world.’ I said, ‘A Englishman living in London in the reign of Richard the Second had he been shown translations from Petrarch or from Dante, would have found no books to answer his questions, but would have questioned some Florentine banker or Lambard merchant as I question you. For all I know, so abundant and simple is this poetry, the new Renaissance has been born in your country and I shall never know of it except by hearsay.’ He answered, ‘we have other poets, but none that are his equal; we call this the epoch of Rabindranath. No poet seem to me as famous in Europe as he is among us. He is as great in music as in poetry, and his songs are sung from the west of India into Burma wherever Bengali is spoken. He was already famous at nineteen when he wrote his first novel; and plays, written when he was but little older, are still played in Calcutta. I so much admire the completeness of his life; when he was very young he wrote much of natural objects, he would sit all day in his garden; form his twenty – fifth year or so to his thirty-fifth perhaps, when he had a great sorrow, wrote the most people.’

Other Indians come to see me and their reverence for this man sounded strange in our world, where we hide great and little sounded strange in our world, where we hide great and little thinkgs under the same veil of obvious comedy and half serious depreciation. When we were making the cathedrals had we a like reverence for our great men? ‘Every morning at three --- I know, for I have seen it’ --- one said to me, ‘the Maha Rishi, would sometimes sit there all through the next day; once upon a river, he fell into contemplation because of the beauty of the landscape, and the rowers waited for eight hours before they could continue their journey. ‘ he then told me of Mr. Tagore’s family and how for generations great men have come out of its cradles. ‘Today ‘, he said, ‘there are Gogonendranath and Abanindranath Tagore, who are artists; and Dwijendranth, Rabindranath’s brother, who is a great philosopher. The squirrels come from the bought and climb on to his knees and the birds alight upon his hands. I notice in these men’s thought a sense of visible beauty and meaning as though they held that doctrine of Nietzsche that we must not believe in the moral or intellectual beauty which does not sooner or later impress itself upon physical things. I said, ‘In the East you know how to keep a family illustrious. The other day the curator of a museum pointed out to me little dark-skinned man who was arranging their Chinese prints and said, ‘’That is the hereditary connoisseur of the Mikado, he is the fourteenth of his family to hold the post.’’ He answered, ‘When Rabindranath was a boy he had all round him in his home literature and music.’ I thought of the abundance, of the simplicity of the poems, and said, ‘In your country is there much propagandist writing, much criticism?

We have to do so much, especially in my own country, that our minds gradually cease to be creative, and we cannot help it. If our life was not a continual warfare, we would not have taste, we would not find hearers and readers. Four- fifths of our energy is spent in the quarrel with bad taste, whether in our own minds or in the minds of other.’ ‘I understand, ‘we too have our propagandist writing. In the villages they recite long mythological poems adapted from the Sanskrit in the Middle Ages, and they often insert passages telling the people that must do their duties.’

II
I have carried the manuscript of these translations about with me for days, reading it in railway trains, or on the top of omnibuses and in restaurants, and I have often had to close it lest some stranger would see how much it moved me. These lyrics --- which are in the original, my Indians tell me, full of subtlety of rhythm, of untranslatable delicacies of colour, of metrical invention ----- display in their thought a world I have dreamed all my life long. The work of a supreme culture, they yet appear as much the growth of the common soil as the grass and the rushes. A tradition, where poetry and religion are the same thing, has passed through the centuries, gathering from learned and unlearned metaphor and emotion, and carried back again to the multitude the thought of the scholar and of the noble. If the civilization of Bengal remains unbroken, if that common mind which ---- as one divines ---- runs through all, is not, as with us, broken into a dozen minds that know nothing of each other, something even of that is most subtle in these verses will have come, in a few generations, to the beggar on the roads. When there was but one mind in England, Chaucer wrote his Troilus and Cressida, and though he had written to be read or to be read out --- for our time was coming on apace --- he was sung by minstrels for a while. Rabindranath Tagore, like Chaucer’s forerunners writes music for his words, and one understands at every moment that he is so abundant, so spontaneous, so daring in his passion, so full of surprise, because he is doing something which has never strange, unnatural, or in need of defence. These verses will not lie in little well-printed books upon ladies’ tables, who turn the pages with indolent hands that they may sigh over a life without meaning, which is yet all they can know of life, or be carried about by students at the university to be laid aside when the work of life begins, but, as the generations pass, travelers will hum them on the highway and men rowing upon rivers. Lovers, while they await on another, shall find, in murmuring them, this love of God a magic gulf wherein their own more bitter passion may bathe and renew its youth. At every moment the heart of this poet flows outward to these without derogation or condescension, for it has known that they will understand; and it has filled itself with the circumstance of their lives. The traveler in the red-brown clothes that he wears that dust may not show upon him, the girl searching in her bed for the petals fallen from the wreath of her royal lover, the servant or the bride awaiting the master’s home – coming in the empty house, are images of the heart turning to God. Flowers and rivers, the blowing of conch shells, the heavy rain of the Indian July, or the parching heat, are images of the moods of that heart in union or in separation; and a man sitting in a boat upon a river playing upon a lute, like one of those figures full of mysterious meaning in a Chinese picture, is God Himself. A whole people, whole civilization, immeasurably strange to us, seems to have been taken up into this imagination; and yet we are not moved because of its strangeness, but because we have met our own image, as though we had walked in Rossetti’s willow wood, or heard, perhaps for the first time in literature, our voice as in a dream.

Since the Renaissance the writing of European saints --- however familiar their metaphor and the general structure of their thought --- has ceased to hold our attention. We know that we must at last forsake the world, and we are accustomed in moments of weariness or exaltation to consider voluntary forsaking; but how can we, who have read so much poetry, seen so many paintings, listened to so much music, where the cry of the flesh and the cry of the soul seem one, forsake it harshly and rudely? What have we in common with St. Bernard covering his eyes that they may not dwell upon the beauty of the lakes of Switzerland, or with the violent rhetoric of the Book of Revelation? We would, if we might, find, as in this book, words full of courtesy. ‘I have got my leave. Bid me farewell, my brother I bow to you all and take my departure. Here I give back the keys of my door ---- and I give up all claims to my house. I only ask for last kind words from you. We were neighbours for long, but I received more than I could give. Now the day has dawned and the lamp that lit my dark corner is out. A summons has come and I am ready for my journey.’ And it is our own mood, when it is furthest from a Kempis or John of the Cross, that cries, ‘And because I love this life, I know I shall love death as well.’ Yet it is not only our thoughts of the parting that this book fathoms all. We had not known that we loved God, hardly it may be that we believed in him; yet looking backward upon our life we discover, in our exploration of the pathways of woods, in our delight in the lonely places of hills, in that mysterious claim that we have made, unavailingly on the women that we have loved, the emotion that created this insidious sweetness. ‘Entering my heart unbidden even as one of the common crowd, unknown to me, my king, thou didst press the signet of eternity upon many a fleeting moment.’ This is no longer the sanctity up, as it were, into a greater intensity of the mood of the painter, painting the dust and the sunlight, and we go for a like voice to St. Francis and to William Blake who have seemed so alien in our violent history. 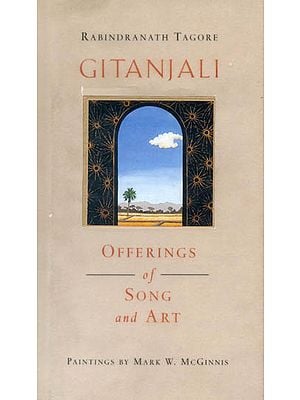 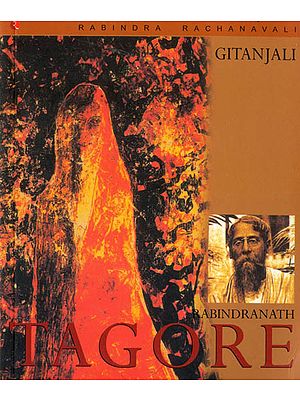 Gitanjali by Rabindranath Tagore
By W. B. Yeats
$15
Sold Out 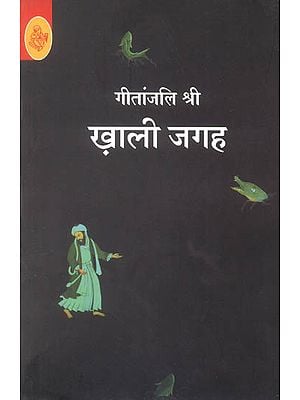