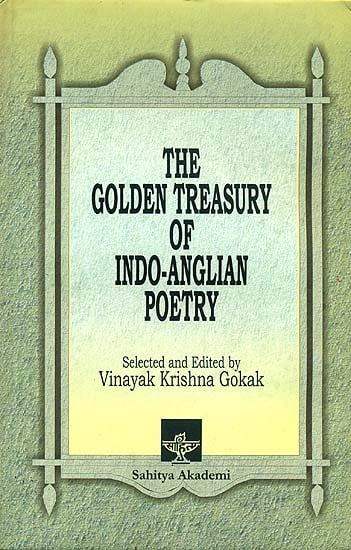 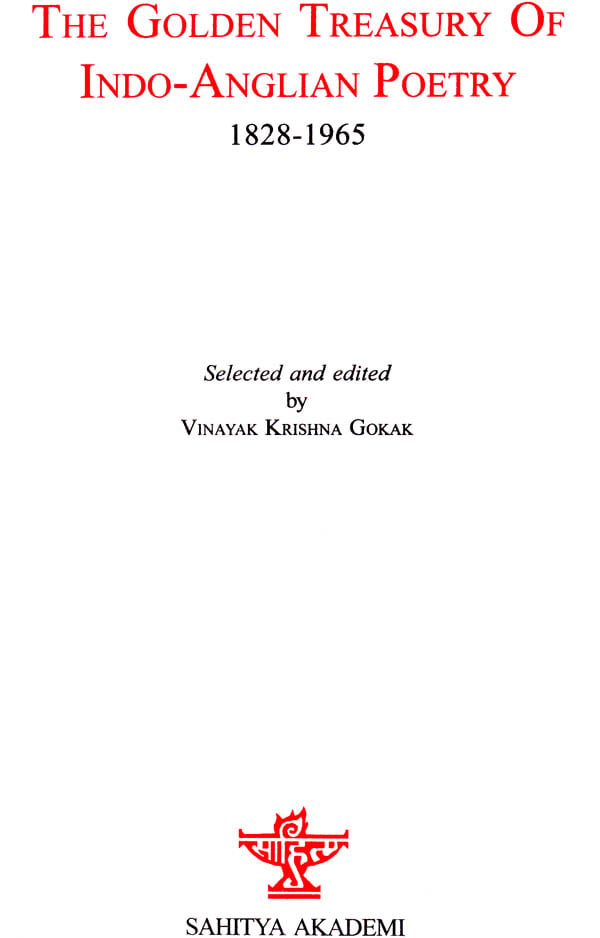 The Golden Treasury of Indo-Anglian Poetry is the first comprehensive anthology of English verse written by Indians, compiled and edited by one who is himself a poet and a critic of distinction. Such a volume is of considerable historical value and contemporary interest, for English has been for more than 150 years, and continues to be, a vehicle creative expression for many of out poets and writers, and is to that extent as much a language. As the Editor has aptly put It, 'Indo-Anglian poetry, like the rest of modern Indian poetry, is Indian first and everything else afterwards. It has voiced the aspirations, the joys and sorrows of the Indian people.

This anthology includes selections form 108 poets, from Derozio and Toru Dutt of the last century to A. K. Ramanujan and Kamala Das of today. In his conscientious exploration of authentic material, specially from the works of earlier poets, the editor visited and consulted the India Office Library and the British Museum in London for rare books and Periodicals.

The bibliographies add to the value of the book as a useful source of related information.

V.K. Gokak (1909-1995) the editor of this volume, is an eminent poet, playwright, novelist, critics and educationist. He is considered to be the pioneer of modern Kannada poetry. He was the President of the Sahitya Akademi.

Indo- Anglian Poetry is now nearly a hundred and fifty years old. British Indian poetry-i.e., poetry written by the British serving in India, and on Indian themes-started on its career during the eighties of the 18th century and is active up-to-date. But we are not concerned with this phase which also is an interesting chapter in the history of modern Indian poetry. We are concerned in this anthology with the poetry written by Indian poets in English.

The history of Indo-Anglian poetry began with Derozio, who was half Indian, half Portuguese. As a teacher of English in the Hindu College, Calcutta from 1826* onwards, he inspired a number of young Indians with a love of the English language and English literature. The first quarter of the 19th century was the period of incubation for Indo-Anglian poetry and Derozio was the moving spine then. He died prematurely in 1831. The publication of Indo-Anglian poems by Indian poets like Kashiprasad Ghose, Gooroo Churn Dutt, Raj Narain Dutt, Michael Madhusudan Dutt and Shoshee Chunder Dutt assumed prominence during the second quarter of the century. The famous Minute of Macaulay on Indian education further helped to promote these 'hours of idleness' in the field of Indo-Anglian poetry. Indo-Anglian poetry was born under a Romantic star. It learned to lisp in the manner of Byron and Scott in the verse of Derozio, M. M. Dutt and others. It began with verse- romances and lyrics written in the Romantic vein.

The deeper tone and accents of Romanticism were caught by poets who came later, during the third quarter of the 19th century. Govin Dutt, the father of Toru Dutt, was the first to introduce the introspective vein in poems like Romance and Words-worth. The process of assimilating Romanticism in all its aspects continued well on into the century and even later. Shelley, for example, found his earliest and best disciple in Tagore, during the last quarter of the 19th century. At the same time, the impact of Victorian poetry was being felt on the Indo-Anglian scene. The Dutt Family Album was' published in 1870. Ram Sharma published his Willow Drops in 1873-74. His was a long literary career. His best work belongs' to the early part of the twentieth century. The longer poetical romance continued to be cultivated. But there were also ballads or 'lays' in the manner of Macaulay on legendary or historical themes. This became the favourite word, later, with Toru Dutt and R.C. Dutt. The glorification of heroic deeds and of domestic virtues, the latter of which was, particularly, a Victorian trait, appealed to the imagination of these poets.

Genuine lyric poetry and lyrical narrative poetry, both of the Romantic and Victorian type, came fully into their own in the last quarter of the 19th century with the generation of Toru Dutt. A Sheaf Gleaned in French Fields, by Aru and Toru Dutt, was published in 1875. Toru Dutt's Ancient Ballads came out in 1882. R.C. Dutt's Lays of Ancient India and his renderings of the Ramayana and the Mahabharata were published in 1894 and 1898-99. Manmohan Ghose's Love Songs and Elegies was published in 1898 and Sri Aurobindo's Songs to Myrtilla in 1895. Sarojini Naidu's The Golden Threshold was published in 1905 . But she had returned to India from England in ,1898 and was 'busy writing towards the closing years of the century. Rabindranath Tagore and Swami Vivekanand were also active during this period. Other poets active during this period were Malabari, J.M. Tagore, A.M. Kunte, Brajendranath Seal and D.L. Roy. While the other poets of this quarter continued the Romantic or Victorian manner or even harked back to the reflective manner of Gray and Goldsmith, even the satirical tradition of Dryden and Pope, Manmohan Ghose, Sri Aurobindo and Sarojini Naidu, who spent their impressionable years in England when the 'Decadent' poets dominated the scene, reveal the influence of this trend in their early poems. 'Decadence' became the main feature of Manmohan Ghose's poetry. Sarojini Naidu's poetic style was modelled on these lines to her very last days and her poems are full of jewelled phrases. But the introduction of Indian themes gave a new vitality to her poetry, even as the Irish Revival replenished the poetry of Yeats. Sri Aurobindo very soon outgrew the manner of his Songs to Myrtilla and blazed a new trail in poetry which many were to follow. The last quarter of the nineteenth century is, on the whole, the golden period of Indo-Anglian poetry.

The first quarter of the 20th century produced a number of poets who continued to write in the Romantic and Victorian manner of the Indo-Anglian poets. Meherjee, A.F. Khabardar, N.V. Thadani, Nizamat Jung, Harindranath Chattopadhyaya and Ananda Acharya exploited India or oriental thought and legend and wrote in the typical Indian manner. N.W. Pai produced a romance in blank verse, The Angel of Misfortune in 1905. Ananda Acharya was, in particular, considerably influenced by Tagore's English renderings of his own poetry, for Acharya wrote several prose-poems in the manner of Tagore. But there were other Indo-Anglian poets who responded to the new trend that was now perceptible in English poetry-Georgianism; Robi Dutt, Joseph Furtado, P. Sheshadri, J. Vakil, G.K. Chettur, S.K. Chettur and Kabraji reveal a Georgian love of the- colloquial idiom and of a simple and forthright handling of poetical themes.

The second quarter of the 20th century may be said to yield a richer harvest. V.N. Bhushan, S.R. Dongerkery, T.P. Kailasam, M. Krishnamurti and A. Menezes continue the humanistic trend. Nolini Kanta Gupta, Dilip Kumar Roy, E.L. Vaswani, J. Krishnamurthi, Nirodbaran, K.D. Sethna, Nishikanto and Themis carry forward the tradition of mystical poetry. A third group, consisting of poets like Manjeri Iswaran and P.R. Kaikini, who used to write in the Romantic tradition, have now changed over to modernistic techniques and others like Nilima Devi, B. Rajan,R.R. Shreshta, and B. Dhingra, who show a love of compact expression and new techniques from the very beginning, reveal new developments in this field. The 'progressive' manner of the thirties is seen in some of the poems of Saklatvala, Appal Swamy and Humayun Kabir. Nirodbaran has produced a few surrealist lyrics.

The third quarter of the 20th century has seen the further strengthening of modernist as well as nee-symbolist trends. Poets like B.B. Paymaster and Adi K. Sett continue to write in the well-established Indo-Anglian tradition. But the Calcutta Writers Workshop has published the work of poets like P. Lal, Kamala Das, V.D. Trivadi, Mary Erulkar, A.K. Ramanujan and others which reveals significant developments on modernist lines in Indo-Anglian poetry. Nissim Ezekiel and S. Mokashi- Punekar also belong here. The trend towards nee-symbolism is seen in the work of poets like Nahar, Themis and Prithvindra.

I am glad a second edition of the anthology has been called for. I should like to take this opportunity to clarify a few points. The poems included in this anthology have been selected from poets whose collection or collections were published during the period 1828-1965.

There has been some unfavourable comment on the title of the anthology. I have called it a 'golden treasury' following Palgrave. I possibly remembered, in this connection, the 'golden treasury' series of selections published from English poets by some famous publishing firms. It cannot be maintained that, in these publications, the only 'gold' that is present is found in their 'gilt edges' and in the 'gold' embossment on the cover. It is, of course, possible that there is a great deal of 'lead' in Indo- Anglian verse, which is, mostly verse written in a second language. In fact, this is one of the major topics discussed in the introduction to the anthology. There may be foreign as well as native critics who tend to regard all Indo-Anglian verse as a 'leaden treasury'. A few others may think that their own choice is golden and that of others rubbish. A critical consensus is slowly but clearly emerging about poets like Toru Dutt, Sarojini- Naidu and Sri Aurobindo. Time, the sovereign critic, is sure to apply this process of rejection or acceptance to others too in good time. As a matter of fact, an anthology is nothing more than a 'case' presented to collective man and to Time, the 'old gipsy man', for dispassionate consideration. I have tried to make this presentation as objective as possible in this anthology.

There is, undoubtedly, a great deal of 'leaden' verse in Indo- Anglian. But some of it is 'golden' too, at least for Indian readers. It is not for nothing that many distinguished Indian writers, spread over a century and a half, have thrown them- 'selves whole-heartedly into this 'strange adventure'. As Indian readers, many of us would like to be proud of them. Some of their writing may be 'gold' only in an historical manner of speaking Some of it may be 'essential' gold. 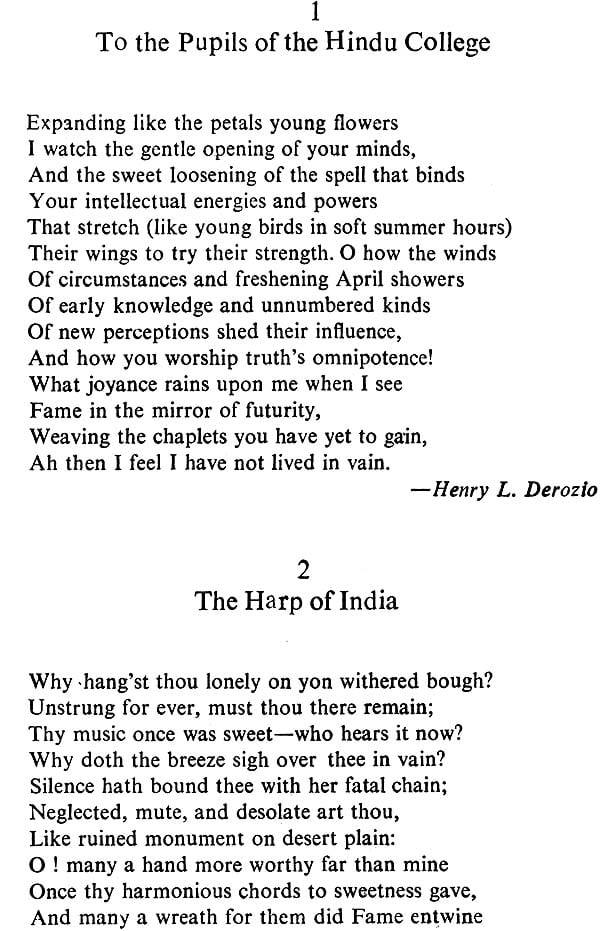 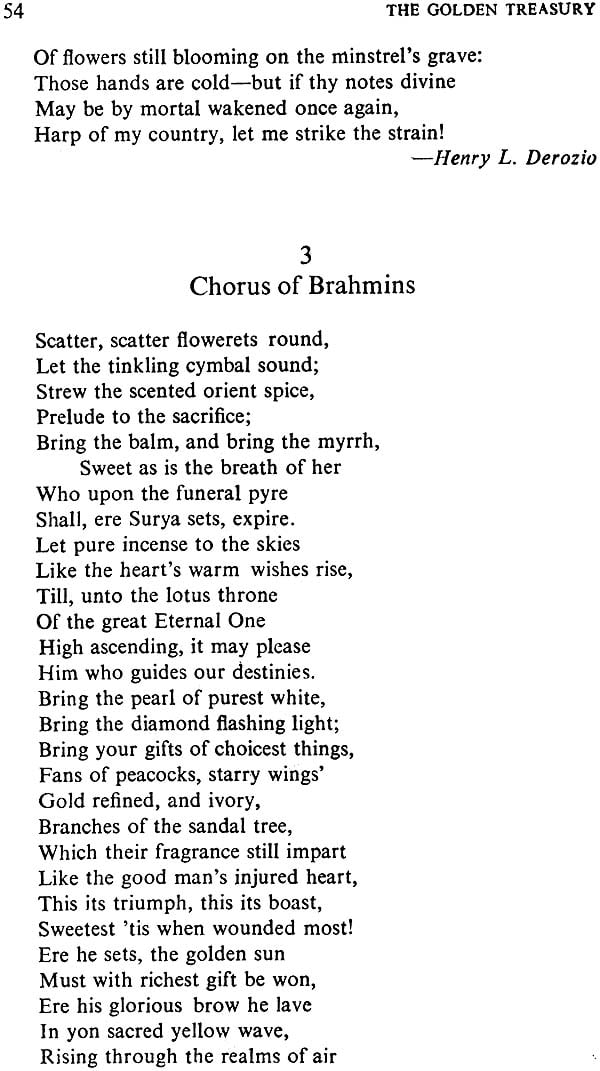 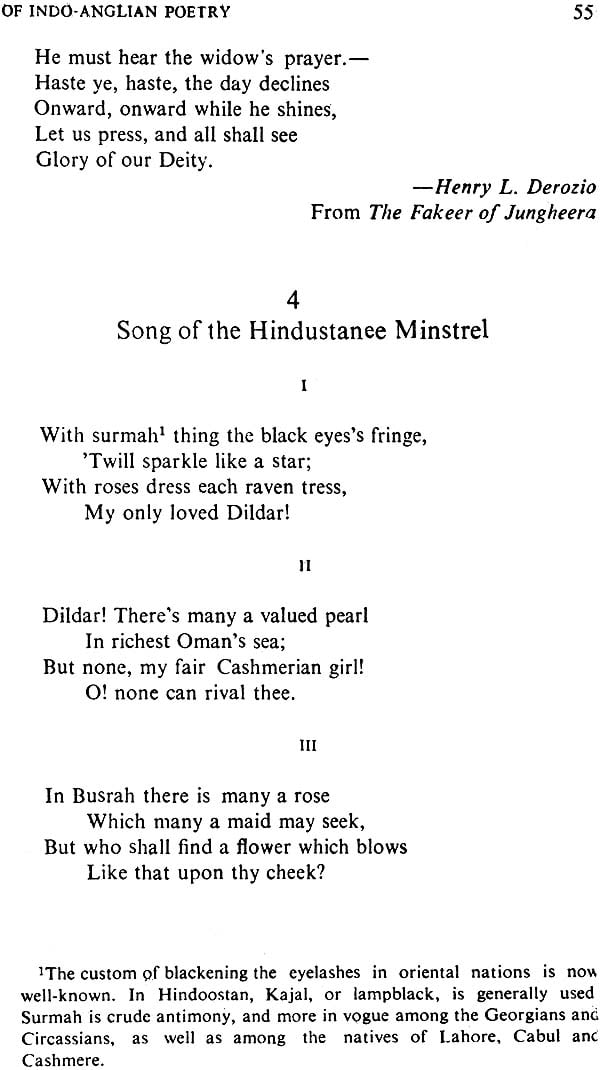 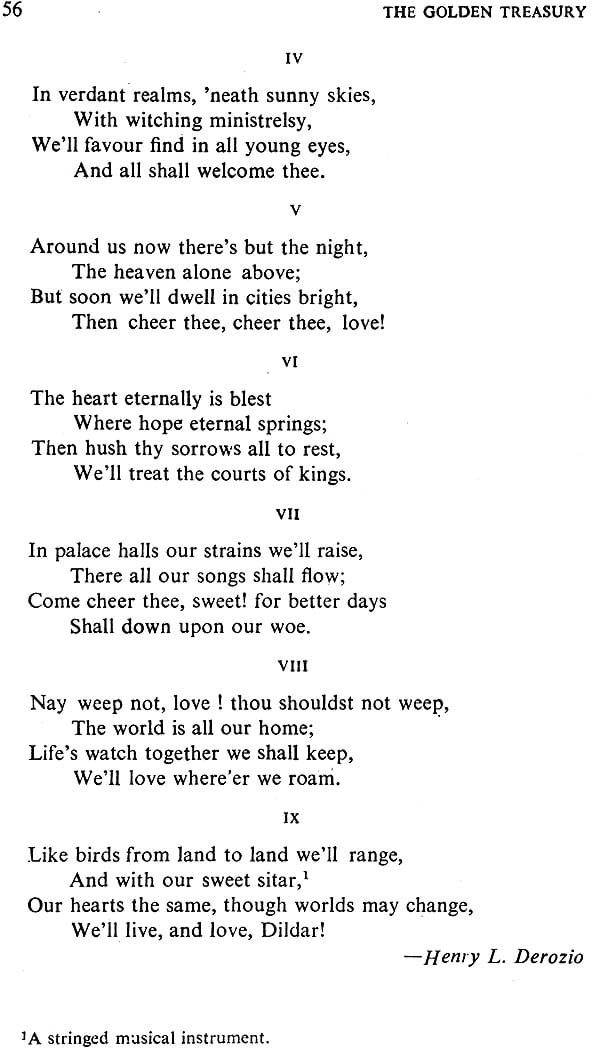 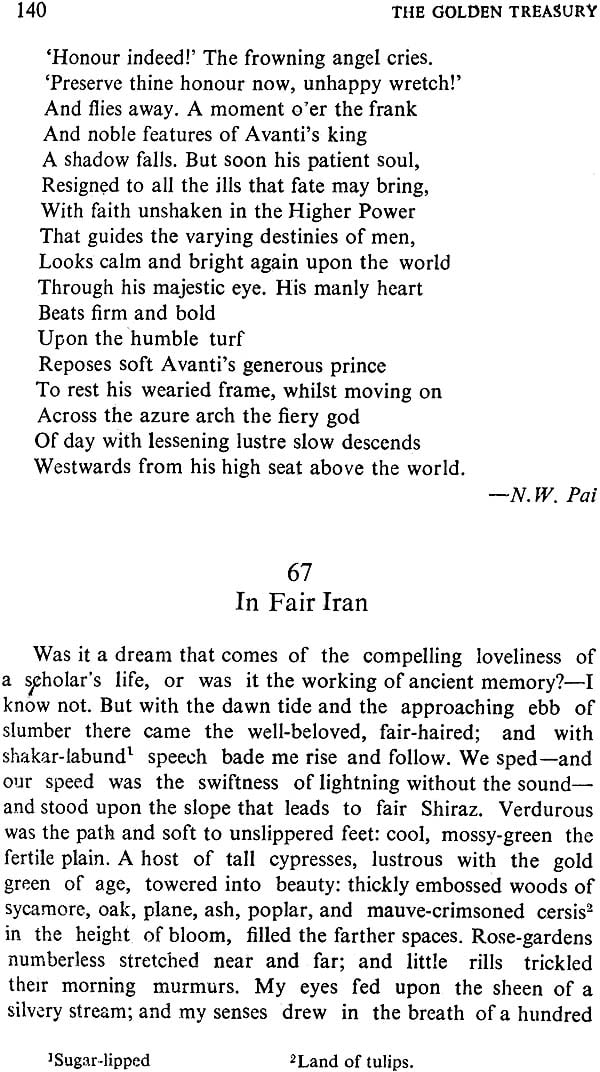 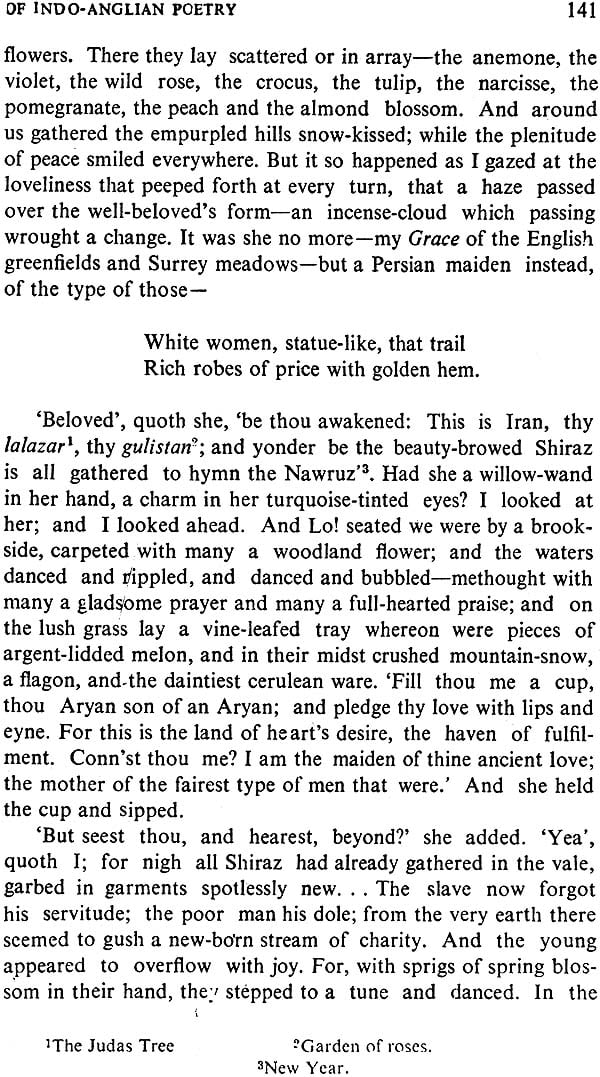 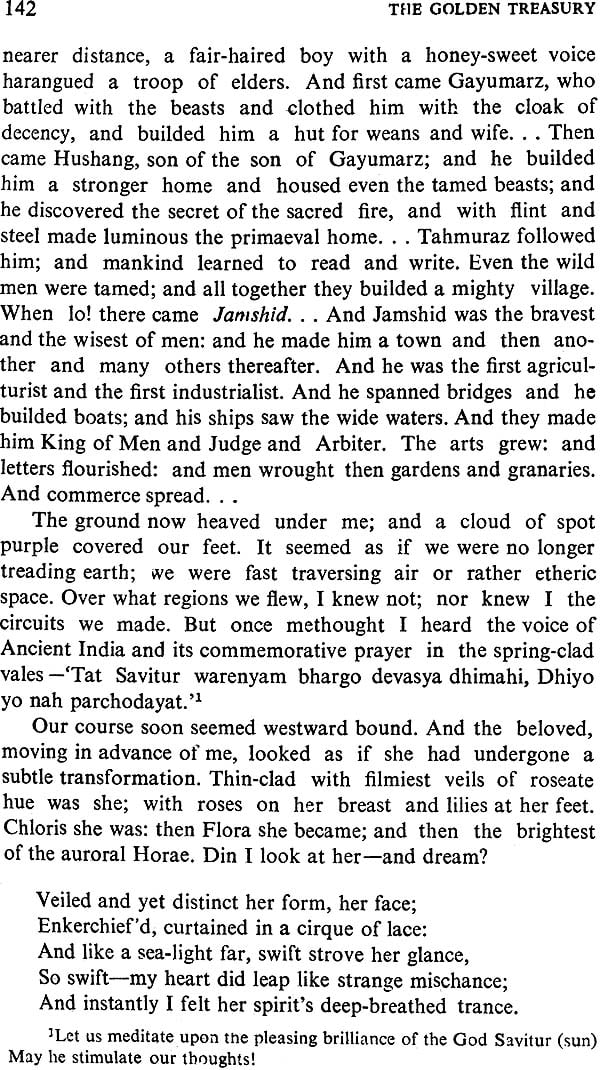 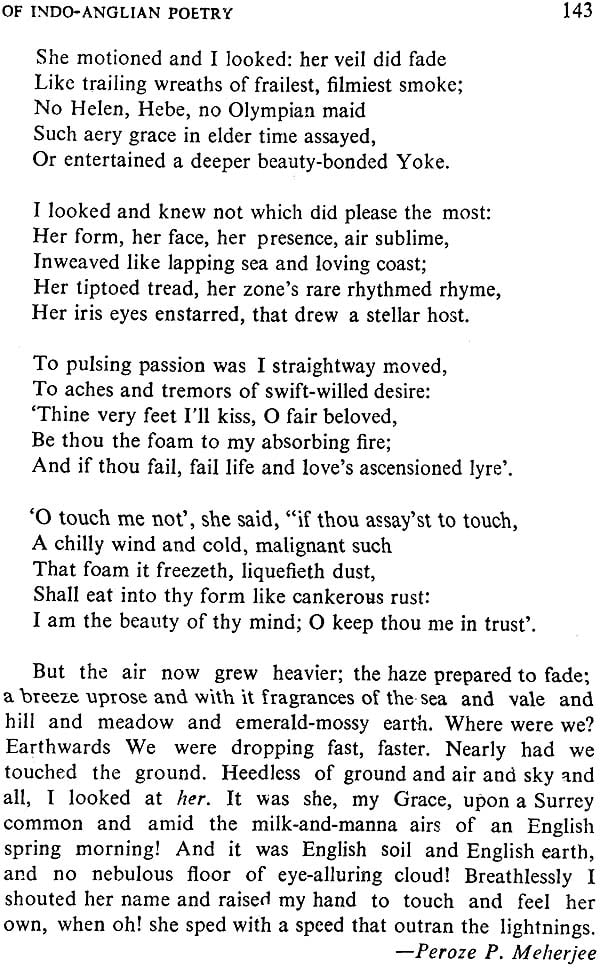 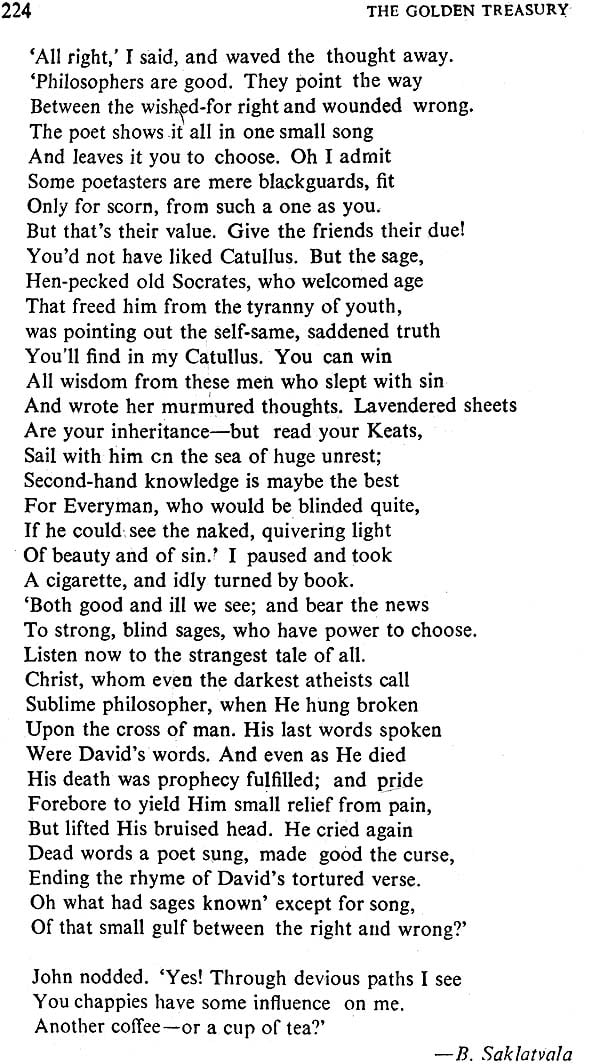 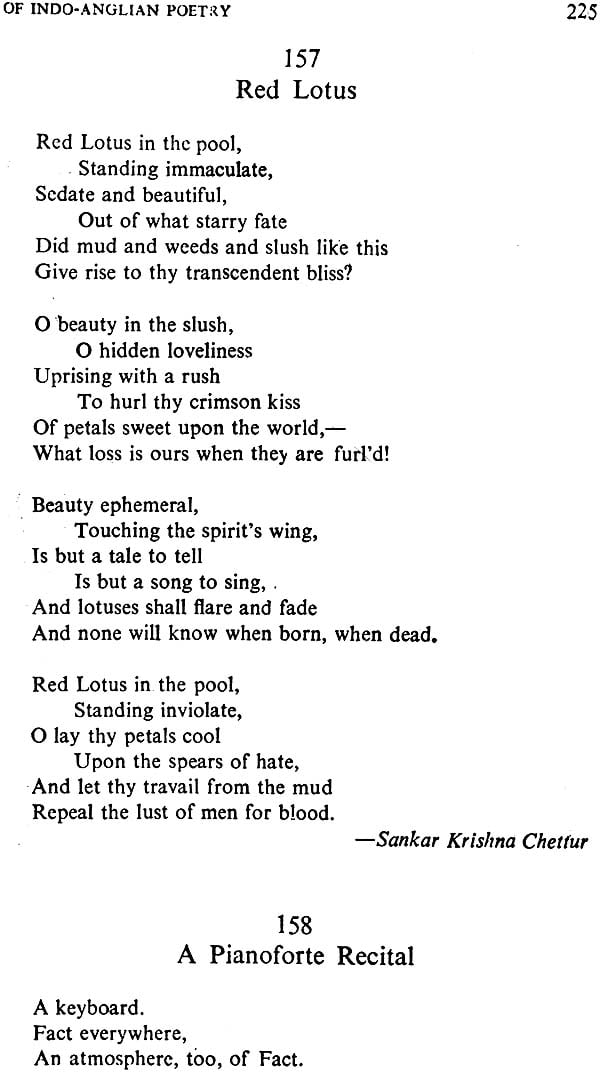 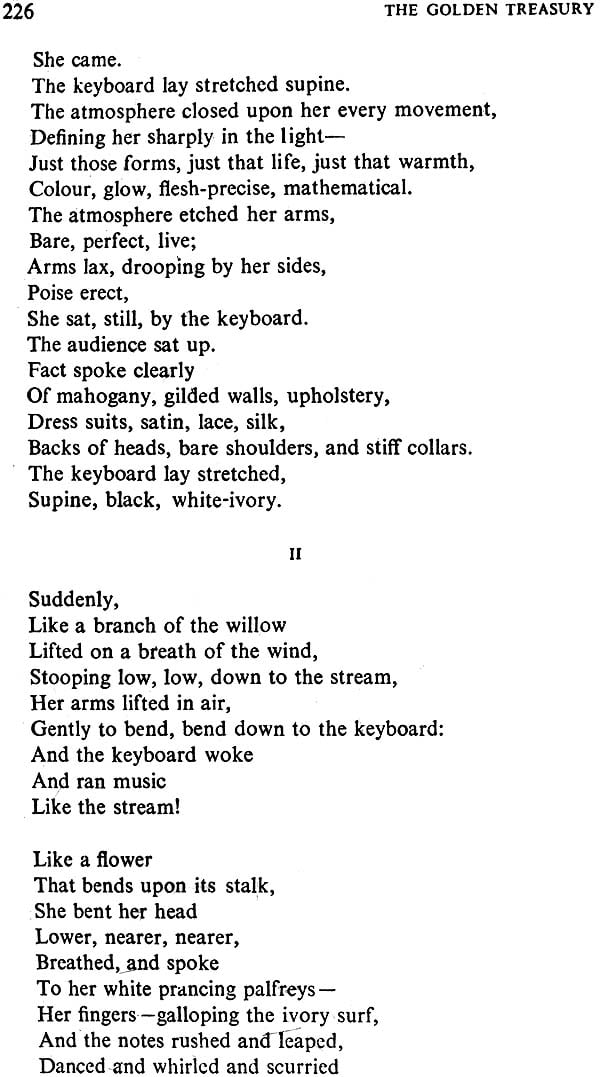 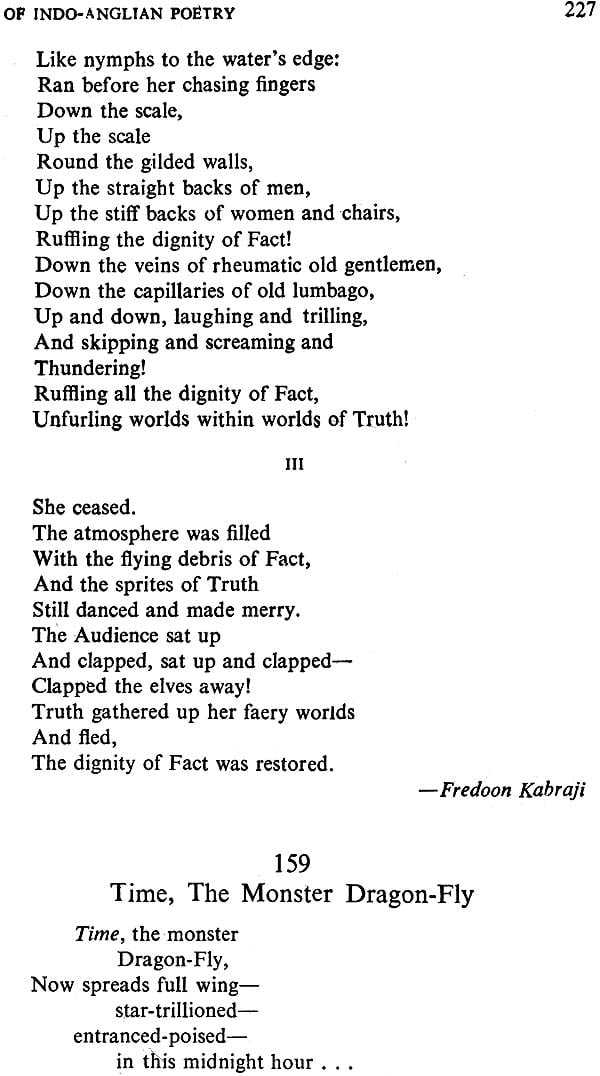 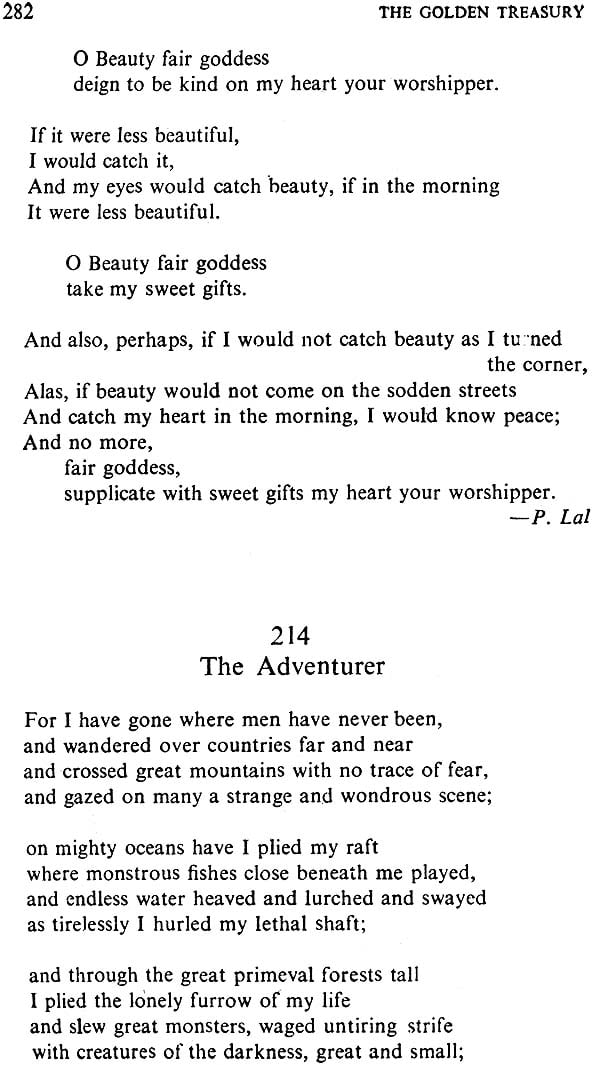 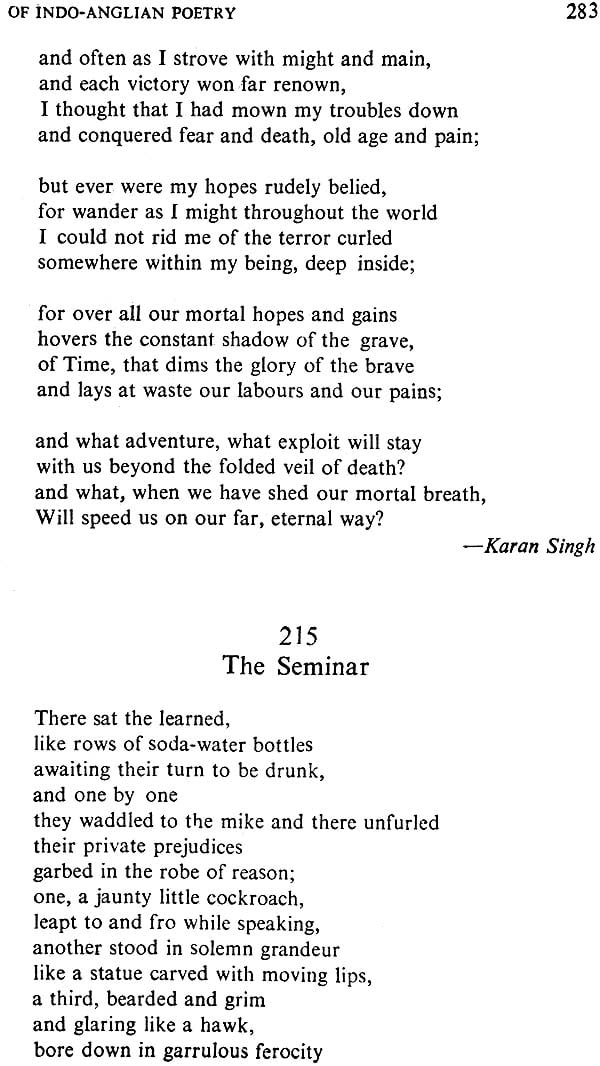 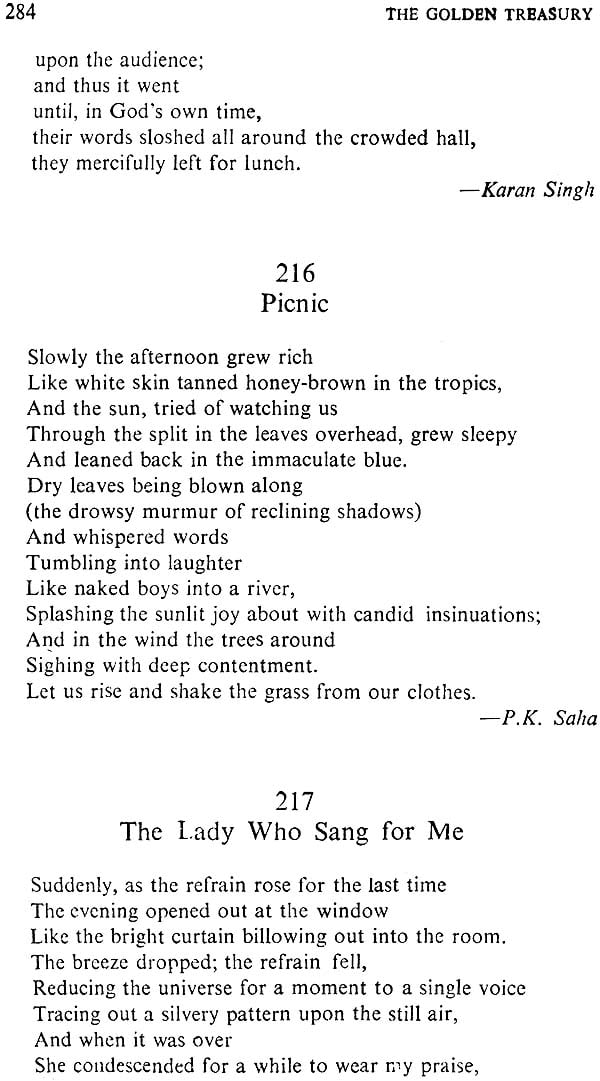 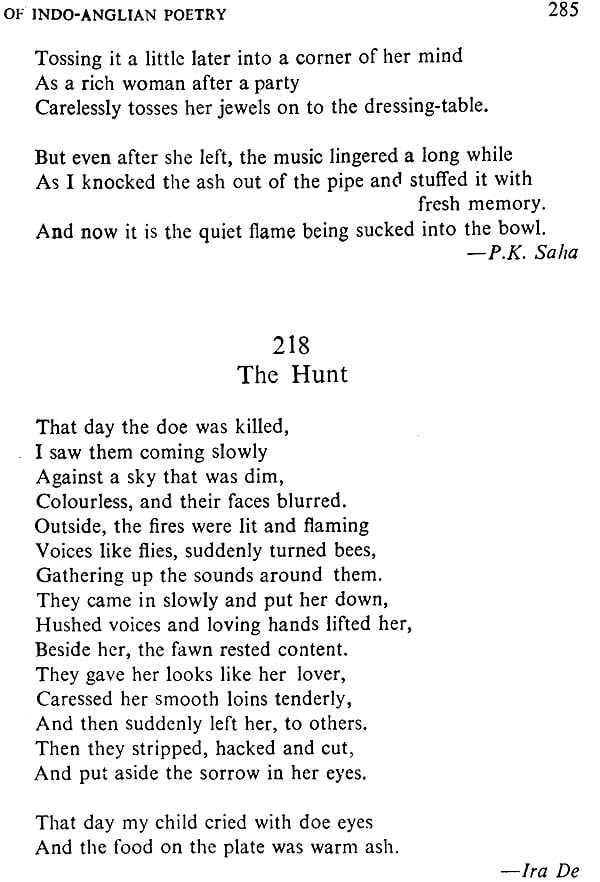