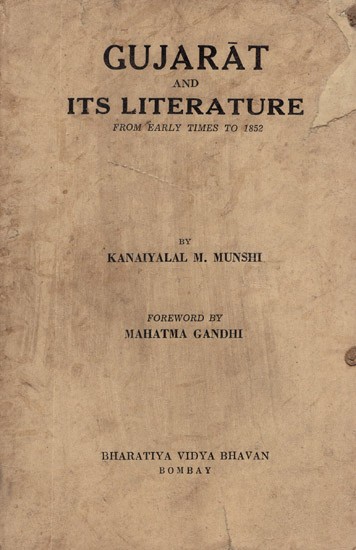 "Gujarat and its Literature" is a remarkable work, full of light and life, an expression of the author's personality. His intense love of Gujarat and his power of imagination which vivifies whatever it touches are unmistakably there. What might surprise most people—it does not surprise me, who knows the author well—is the indomitable industry which he has brought to bear on his survey, and that, too, inside prison walls and in spite of indifferent health.

The characteristic feature of the work, however, is his attempt to study the literature of Gujarat in the light of its history and the history of India. This he has done abundantly and done it very well. At the same time, one is glad to find that in his work the literary critic is not lost in the historian: he has paid equal attention to the historical background and the literary figures. Estimation of literary worth is, after all, the main function of a reviewer of literature, and in the discharge of this duty he has been both just and sympathetic, and at times even generous.

The preface to the first edition of this work was dated March 5, 1935.

The book has now been out of print for several years and I am happy to find that at least the first part of the second edition of the work is being published after eighteen years. As stated in the preface of the first edition of this book, I was indebted to Messrs Longmans, Green & Co. Ltd., both for inducing me to write it, as also for publishing the book; but now that the copyright in all my works has been transferred to the Bharatiya Vidya Bhavan, which has a publishing department of its own, that distinguished firm has been good enough, at my request, to reassign the copyright in the work to the Bhavan. I take this opportunity of thanking them not only for publishing the first edition, but also for their kindness in relinquishing their rights in this generous manner.

This work in its second edition had to be divided into two parts for several reasons. As the original work was written in jail, the materials at my disposal were limited. My studies in the history of Gujarat of the period between A.D. 550 and 1300, now published under the title 'Imperial Gurjaras' has also led me to revise my outlook on that period; this involved the revision of part I: ‘Prakrit, Samskrit and Apabhramsa (A.C. 200? - 1297)'. The modern period (1852-1932) also has had to be overhauled, because the literary achievements of the authors living in 1933 have to be brought up to date and a survey of literature from 1934 to 1953 has to be written—a task for which I have little time at my disposal. Since 1934 the political, social and economic conditions of Gujarat also have, with the other parts of the country, undergone revolutionary changes and both the Preface and the Introduction, in so far as they relate to the modern period, have to be reconsidered in their light.

As the work has been divided into two, the introductory remark' relevant to this volume only have been retained. Gandhiji's preface and a part of the old preface have been reproduced to maintain the continuity.

It is hoped that the Second Volume will be published in a few months.

The only reason for inviting me to write a foreword to a literary work such as Shri Munshi's can be that I am called 'Mahatma'. I can make no literary pretensions. My acquaintance with Gujarati and for that matter any literature, is, for no fault of mine, next to nothing. Having led a life of intense action since early youth I have had no opportunity of reading except in prisons whether in South Africa or in India. Shri Munshi's survey of Gujarati literature has made fascinating reading for me. His miniature pen-portraits of writers give one a fair introduction to their writings.

Shri Munshi's estimate of our literary achievement appears to me to be very faithful. The survey naturally confines itself to the language understood and spoken by the middle class. Commercially-minded and self-satisfied, their language has naturally been 'effeminate and sensuous'. Of the language of the people we know next to nothing. We hardly understand their speech. The gulf between them and us the middle clas is so great that we do not know them and they know still less of what we think and speak.

The dignified persistence of Shri Devendra Satyarthi, a writer whom I do not remember to have ever met, has made me peep into his remarkable collection of folk songs of the provinces he has been travelling in. They are the literature of the people. The middle classes of the provinces to which the songs belong are untouched by them, even as we of Gujarat are untouched by the songs of folk, i.e. the language of the masses of Gujarat. Meghani of the Saurashtra school has done folklore research in Kathiawar. His researches show the gulf that exists between the language of the people and ours.

But the folklore belongs to an order of things that is passing away, if it has not already done so. There is an awakening among the masses. They have begun not with thought but with action, as I suppose they always do. Their language has yet to take definite shape. It is to be found somewhat, but only somewhat, in the newspapers; not in books. Shri Munshi's work therefore may be said to have only commenced with the volume before me. It was necessary. But he has to continue the work so well begun. He has the requisite passion for his work. If he has health, he will now go direct to the people and find out what they are thinking, and he will give expression to their thoughts. The unquestionable poverty of Gujarati is a token of the poverty of the people. But no language is really poor. We have hardly had time to speak since we have begun to act. Gujarat like the rest of India is brooding. The language is shaping itself. There is enough work awaiting writers' like our author.

Munshi has alluded to Parsi-Gujarati. So there is. It is unfortunate that there is Parsi-Gujarati. It is confined to ,novels and stories of the shilling shocker style. They are meant merely for passing the idle hour. The language is tortured out of shape. And just as there is Parsi-Gujarati there is also Muslim-Gujarati though on a much humbler scale. It is impossible to ignore these two streams. They are not wells of Gujarati undefiled. But no reviewer of Gujarati literature can afford to ignore the existence of works which hundreds, if not thousands, of Parsis and Muslims read and by which, may be, even shape part of their conduct. 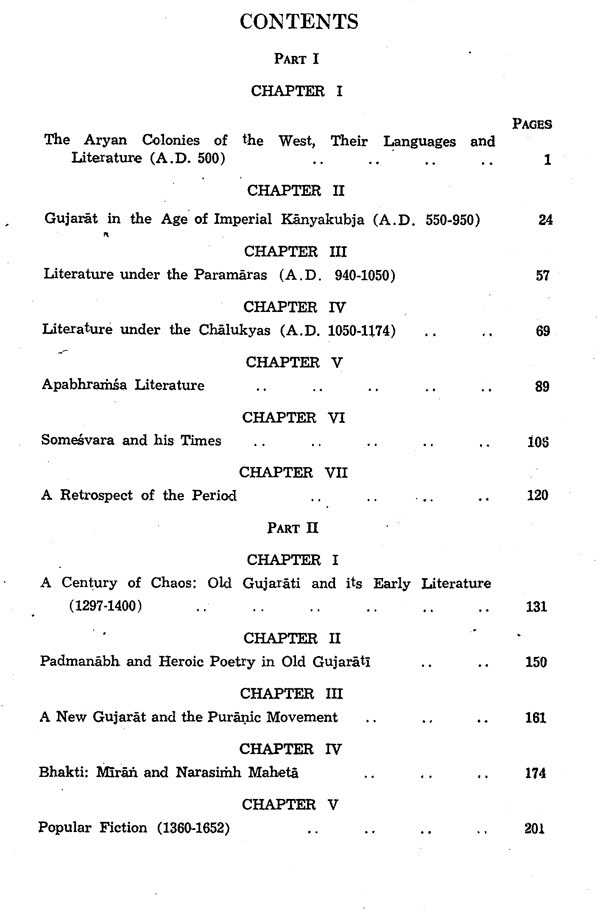 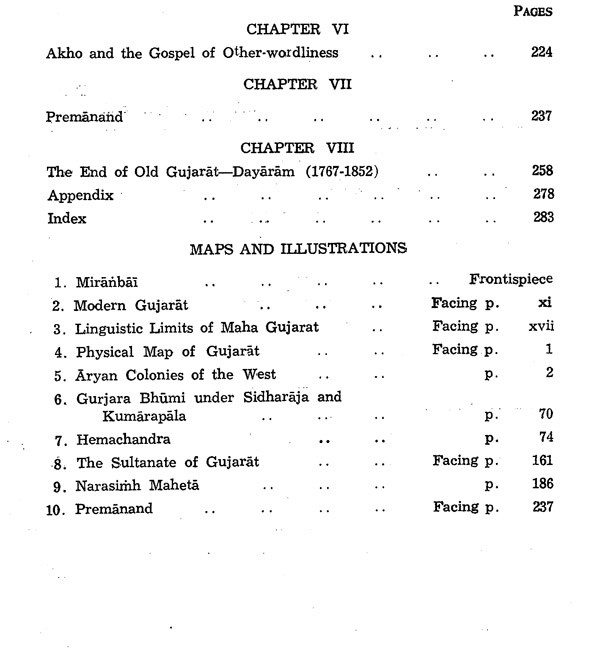 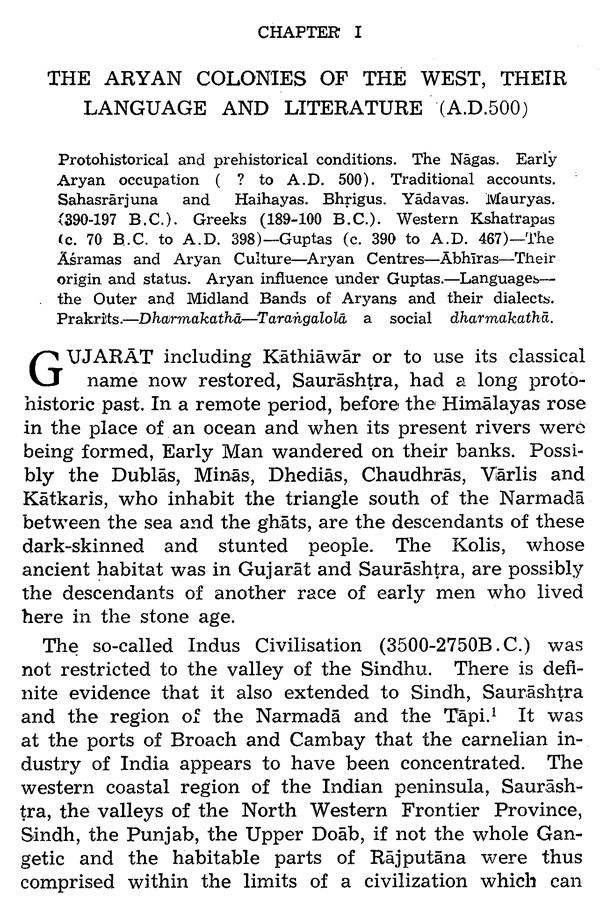 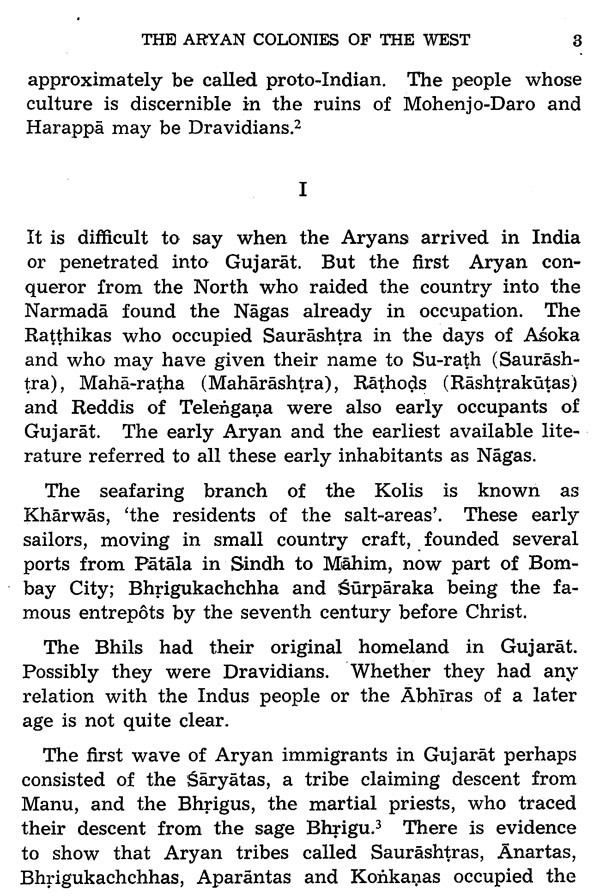 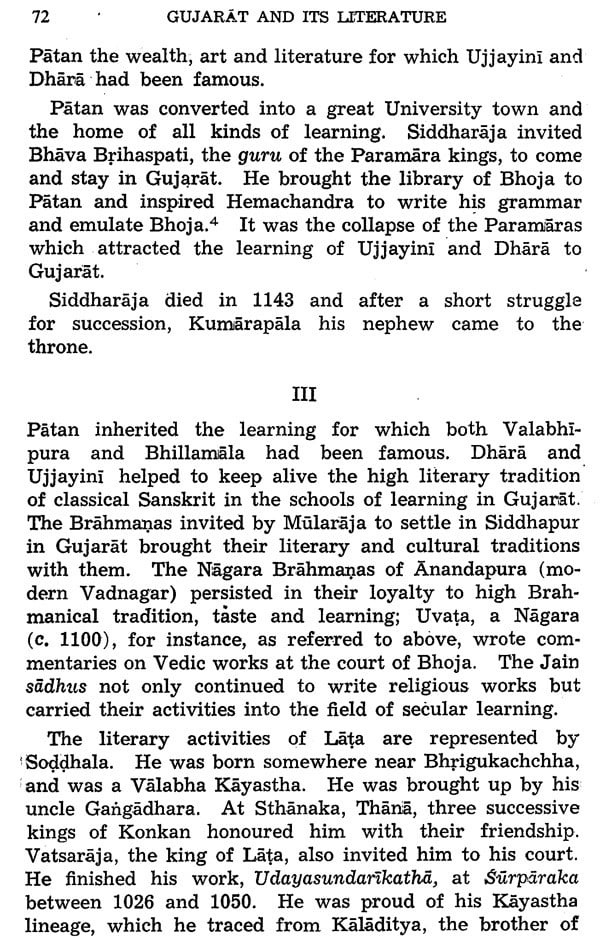 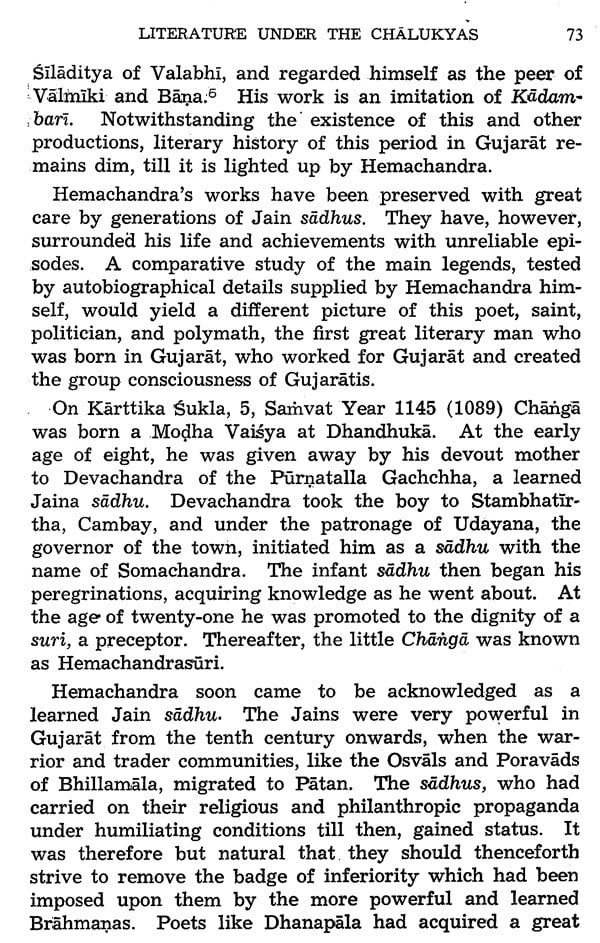 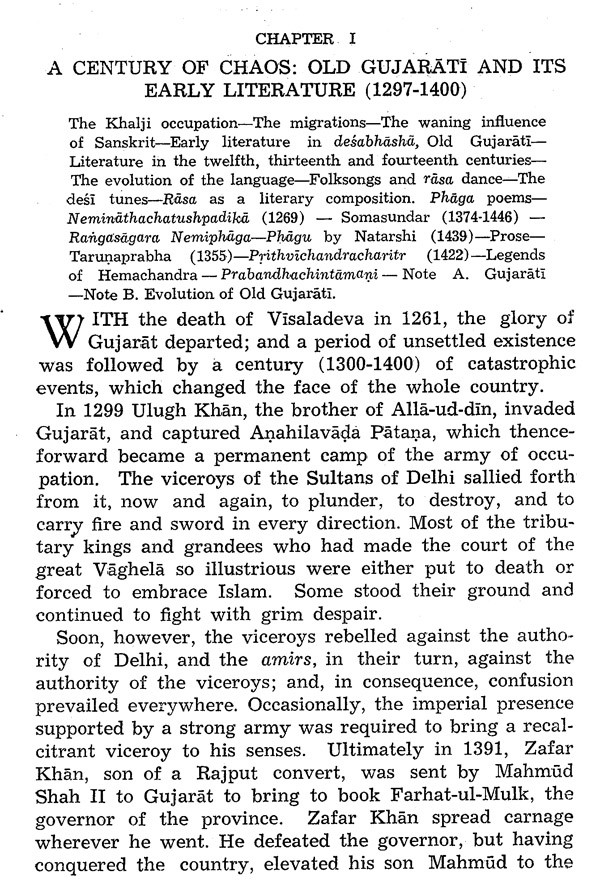 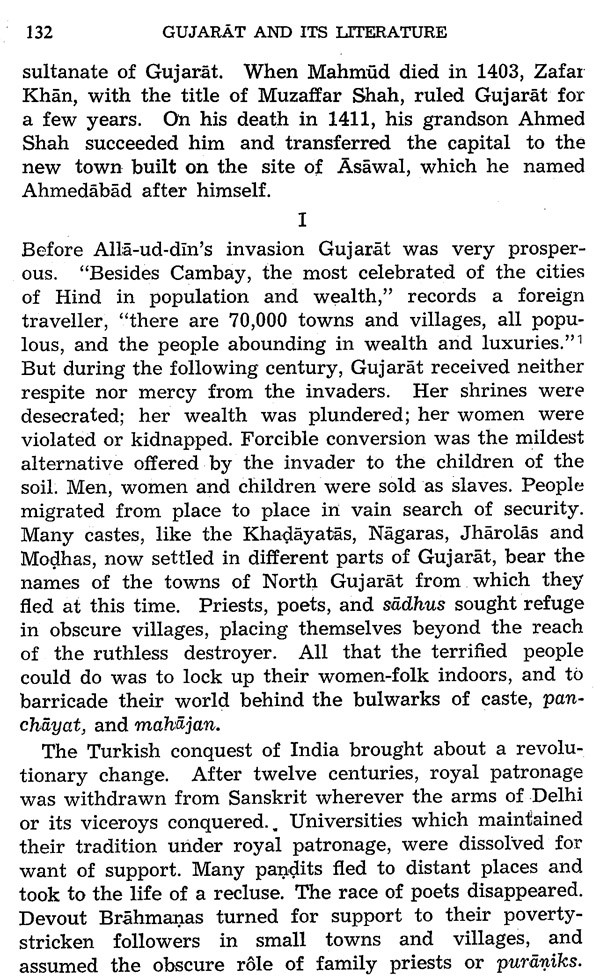 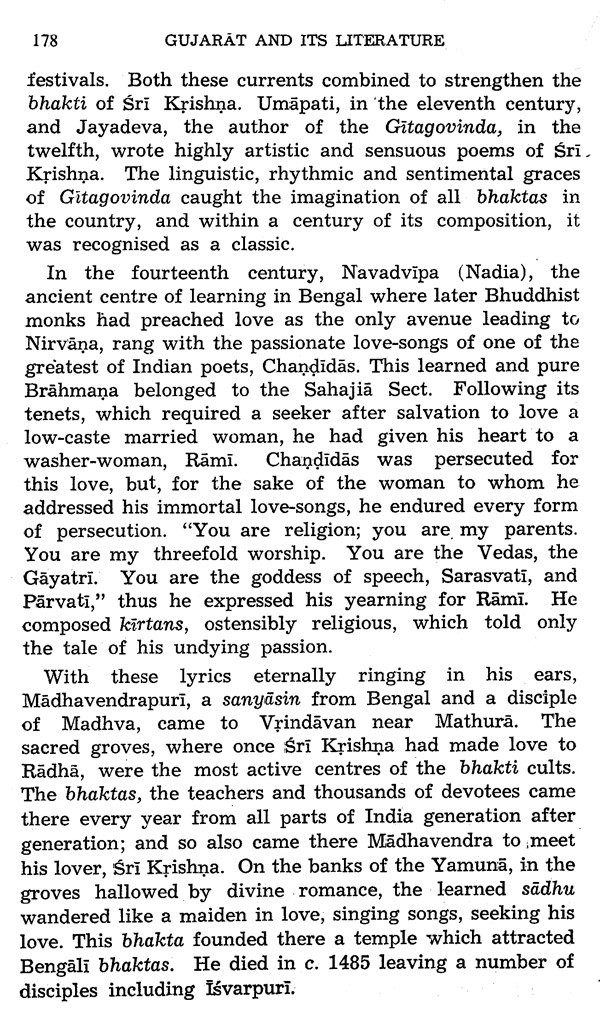 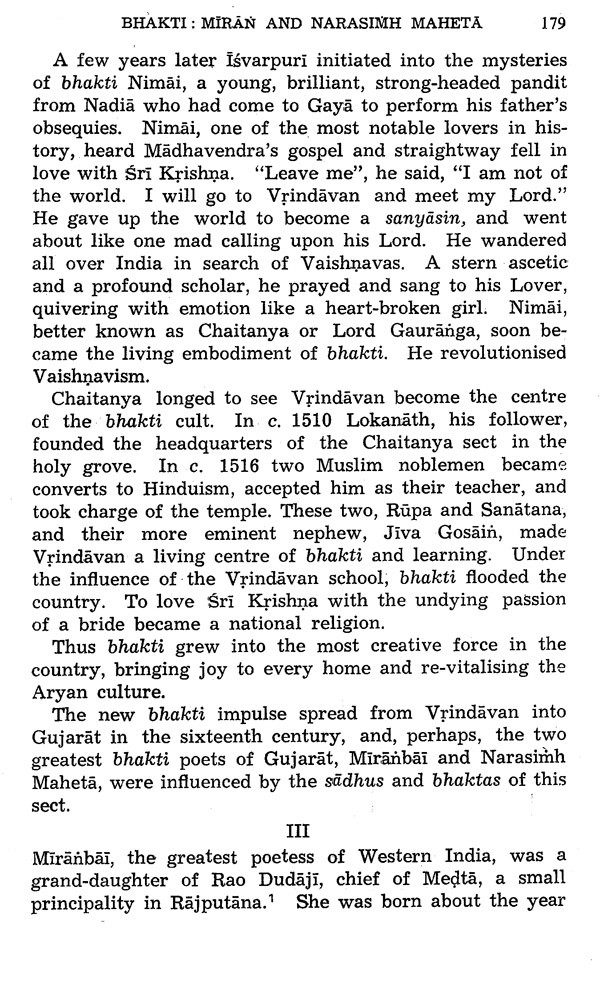