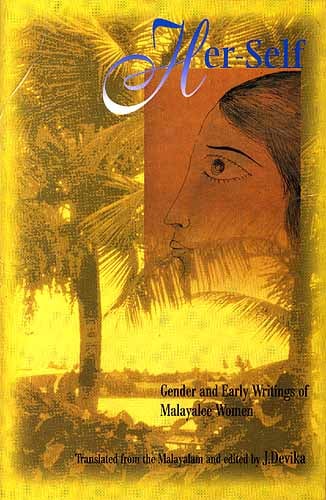 This collection of early writings of Malayalee women, translated for the first time into English, give us, in the words of V. Geetha, 'text that dazzle'. Written between 1898-1938, they reveal the vigorous debate over modern gender relations that was taking place in this period. Women reflected on what was 'Womanly', on education, duties, vocation and civil roles, and ongoing discussion, first influenced by reformism and later by nationalist and communist ideas, which remains alive today.

As the newly educated elite, these women, the editor, J. Devika, suggests, posed an alternative, which she calls 'the order of gender', an ideal form of social ordering projected into the future and re-discovered in the imagined 'Golden Age' of Hindu society, 'in which the only unsurpassable social division would be of gender'. This would be 'sustained through the complementary exchange of gendered capacities, men as industrial producers in the political, economic and intellectual field, and women as efficient and active overseers of the domestic domain.' Thus many of the first-generation feminists like pennammabhayi and K. Chinnamma actively promoted this new active domestic ideal for women, K. Lakshmy Amma, however, was forthright in arguing: 'Woman is not merely a child-producing machine' ...Is Man's freedom merely a means of bolstering the slavery of Woman?'

A revolutionary perception that the border between the home and the outside world was beginning to dissolve was emerging, yet those writing in its favour would not have wanted to usher n a social revolution as such. Chinnammalu Amma's essay suggests that women's capacities now could be put to use in schools, hospitals, philanthropic institutions, local bodies, politics. Bhageeraty Amma urged women to write, considering the status of women and Malayalam literature to be inextricably linked.

Thus the Womanly was now identified with a certain kind of power and not with a certain space, the domestic. At the same time, though, the ideal of 'a taxing modern domesticity' was being formed that placed women in sole charge of child rearing. However, there were women who wished to convert domesticity into a place of comfort and repose for themselves, and Mrs. I. C. Chacko's essay indicates this with enviable self-confidence. Marriage itself was being contested. Rejecting dowry, Padmavaty Amma suggested abandoning marriage if a suitable groom was not found while others urged that since a woman's consent was not asked for, the marriage was not valid.

The anthology also contains many spirited rejoinders to distinguished male intellectuals who opposed women's employment or 'intrusion' into public space, as can be seen from the pieces by Anna Chandy, a 24-year-old law student, who refuted a learned male judge, and C. P. Kalyani Amma, among others. J. Devika also discusses what is excluded from the Womanhood that is being talked about as well as a need to define what is non-Womanly.

The authors in this collection hailed mostly from those groups which obtained access to modern education and ways of life like the Nairs, Syrian Christians and Ezhavas. But there are other voices too, notably from a few women of the Nambutiri Brahmin caste who were at the forefront of reformist activism and two by Muslim women, the eighteen-year-old M. Haleema Beevi who organized a conference of about two hundred women and Ayesha Mayan, who was involved with women's education.

A path-breaking and beguiling collection translated with meticulous care and a deliberately gentle touch that brings these valuable texts alive, linking the feminist movement with its past.

These writings, translated for the first time from the Bengali, are by women who were amongst the earliest to receive a modern education and become members of the reading and writing public. Their contributions helped build the image of the new educated woman: self-confident, opinionated, transgressive.

My Reminiscences: Social Development during the Gandhian Era and After Renuka Ray

In writing about her life and work, Renuka Ray also relates the momentous history of India from her birth in 1904 to her death in 1997, encompassing the years of the growth and consolidation of the nationalist movement, to partition and independence, and the equally compelling post-independence period. As a member of the ruling elite who participated in the Central Assembly, the Constituent Assembly, the Lok Sabha and also as minister for Refugees and Rehabilitation in the West Bengal cabinet, 1952-57, she provides an insider's view to the historical events she witnessed.

Interviewing seven women writers, Shashi Deshpande, Shama Futehally, Githa Hariharan, Mina Singh, Anuradha Marwah Roy, Lakshmi Kannan and Anna Sujatha Mathai, the editor also presents extracts from their writings. He elicits intriguing responses on why they choose to write in English, their views on the diasporic writings of Indians and the regional languages.