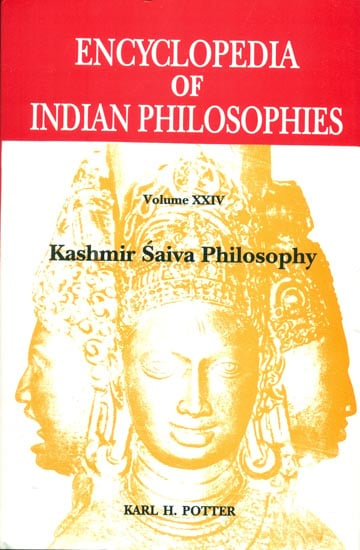 "Kashmir Saivism" is something of a misnomer if used to refer simply to the Trika / Pratyabhijna system of Kashmir Saiva philosophy. Foratleast three other non-dualistic systems are often identified: NandikeSvara Saivism, Rasesvara Saivism, and the Visistadvaita Saivism of Srikantha. This volume, although entitled "Kashmir Saivism ", does not deal with Nandikesvara 'and Rasesvara-Saivism because of their paucity of significant philosophical materials. And Srikantha's philosophy has been dealt with in a separate volume of this Encyclopedia (volume 15), because of its affinity to Bedhabheda. For the most part, this volume follows common parlance and maps a lineage, mostly Pratyabhijna but also diverse, including such authors as Sivanarida, Abhinavagupta, and Jayaratha.

KARL H. POTTER is Professor of philosophy and South Asian Studies at the University of Washington in Seattle, and is the General Editor of the Encyclopedia of Indian Philosophies containing 28 volumes.

As many' as eight schools of Saivism developed in different times in different parts of India. These are Pasupata, Lakulisa-pasupata, Saivasiddhanta, Virasaiva, Nandikesvara- Saiva, Rasesvara-saiva, Trika-saiva and Visistadvaita Saiva of Srikantha. From the philosophical point of view these schools can be classified under three broad heads, viz., the dualistic stream which would include the two southern schools of Pasupata and Saivasiddhanta, the dualistic-cum-non-dualistic stream which could be represented by the Lakulisa-pasupata and Virasaiva schools, and the monistic stream under which four schools, viz., Nandikesvara-saiva, Rasesvara-saiva, Visistadvaitasaiva of Srikantha and Trika-saiva come.

Of these eight schools, scholars differ on the identity of the Pasupata-saivas. Some scholars believe that the Pasupata- saiva and Lakulisa Pasupata are identical schools, but there is some literary evidence to show that the Pasupata-saiva was different from the latter, and that the former was the older school. Though the Pasupatas have been referred to by name by Haribhadra in his Saddarsanasamuccaya, Samkaracarya in his Brahmasutrabhasya and Rajasekhara in his Saddarsana- samuccaya, no literature. belonging to this school has come down to us. It is only through some references to dualistic doctrines ascribed to this school by Badarayana, Samkaracarya, and Rajasekhara in their works that we come to the conclusion concerning the identity of the Pasupatas as distinct from the Lakulisa Pasupata which believes in dualism-cum-non-dualism. We also know from the Vedantic commentaries Ratnaprabhii, Bhiimati, etc., that the Nyaya-Vaisesika systems were indebted to the Pasupata system in formulating their theory of creation in which Isvara plays a pivotal role. Moreover, that this Pasupata system was different from Lakulisa Pasupata's system is obvious from the fact that references to Pasupata's dualistic doctrines has been made in the vedantasiuras and 'the Vedantic commentaries Ratnaprabha and Anandagiriya. This indicates the existence of this school of thought in the pre-Christian era. Samkaracarya and his followers like Anandagiri have referred to three sects of the Saiva cult, viz., Kalamukha, Karunika and Siddhantin. It is possible that the dualistic Pasupata system is represented by one-of them.

The founder of the Lakulisa Pasupata was admittedly a historical person who flourished in Kathiawar in the second century A.D. An inscription found near Mathura dated 380-381 A.D. mentions Lakulisa as the founder of the Saiva sect who is stated to have flourished eleven generations before Mahesvaracaya Udita. On the basis of this inscription and other inscriptions found at Udaipur and other places historians have fixed his date around the second century A.D. Puranic legends about Lakulisa describe him as an incarnation of Lord Siva. He is said to have composed the Piisupata Siitras in which he preached dualistic-cum-non-dualistic philosophy. It postulated two ultimate categories, viz.,pati (the Supreme Lord) and pusu (the limited individual) whose relationship is dualistic-cum- non-dualistic. The Supreme Lord is to be endowed with infinite power and infinite knowledge as the essence of his divinity, while pasi) is covered with five kinds of mala (defilement) such as false awareness, adharma (demerit), etc. Kaundinya wrote a commentary on the Pasupata Sutras which forms the basic book for this system. Bhasarvajna wrote the Gana Karikas which has been referred to by Madhavacarya in his Sarvadarsanasamgraha. Other important works belonging to this system are Yamaprakarana and Atmasamarpana by Visuddhamuni and Karanapadartha by an unknown author. The names Kausika, Garga, Mitra and Karusvya are found mentioned in the Puranas.

The Siddhanta Saiva is one of the few schools which has an extensive literature and following today in South India. It is believed that this system" which is based on twenty-eight Agamas revealed by Lord Siva himself, was originated by 84 Saiva saints: among them Santa Appara, Jnanasambandha, Sundaramurti and Kanikkanayaka were the most famous. It was however developed in the ninth century A.D. by Sadyojyoti and others. Sadyojyoti is said to have written commentaries on- the . Rauravagama and Svayambhuva Agama giving• dualistic interpretation to the Agamas. He wrote a number of original works too, such as Bhogakarika, Moksakarika, Tattvasamgraha, etc. He was recognized as an authority on dualistic Saivism by Abhinavagupta who has referred to him as Khetapala or Khetanda. Other well known exponents of this school were Brhaspati, Samkaranandana, author of Prajnalamkara Devabala oath century A.D.), Ramakantha, author of Ratnatraya, Srikanta, author of Naresvarapariksa, Nadakarika, and Aghorasiva., They have been frequently mentioned by Trika writers on Saivism. It postulates three categories - pati (Supreme Lord), pasu (limited individual) and pasa (bonds) - according to Madhavacarya who has given a summary of the main tenets of the system.

Another southern school of Saivism which is dualistic- cum-non-dualistic in outlook was started by Revana, whose name occurs in the Saiva commentary on the vedantasutros of Badarayana by Sripati Panditaradhya, along with two acaryas Marula and Ekorama. This school is known as Virasaivism. Sripati Panditaradhya was a prolific writer: among his works Siddhantasikhamani and Tantrasaraprakasika are well known. Basava, who flourished in the 12th century A.D., was a well- known exponent of this school, and it is he who started the practice of wearing the linga, which is still in vogue today.

The oldest school of Salvism belonging to the monistic stream was Nandikesvara Saivism which was founded by Nandikesvara, author of Nandikesvarakarika. According to Upamanyu, the commentator on the Karika, Nandikesvara was a contemporary of Panini, He has been referred to by Patanjali in his Mahabhasya as Brahmarsi, author of fourteen sutras. Nandikesvara admitted thirty-six tattvas which are not the same as in the Trika system. He postulated Paramasiva as the Supreme Reality, and also the doctrine of divine freedom as we find it in the Trika system. 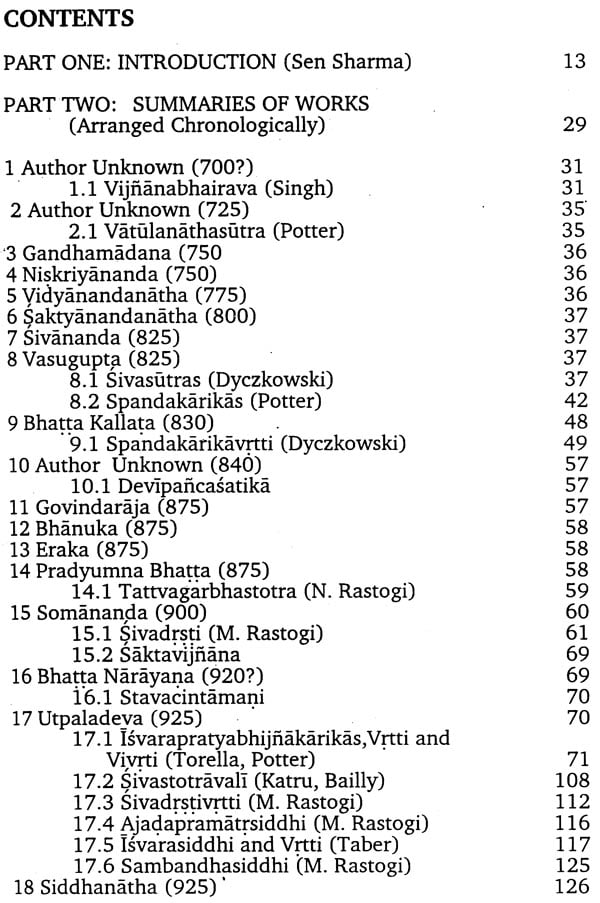 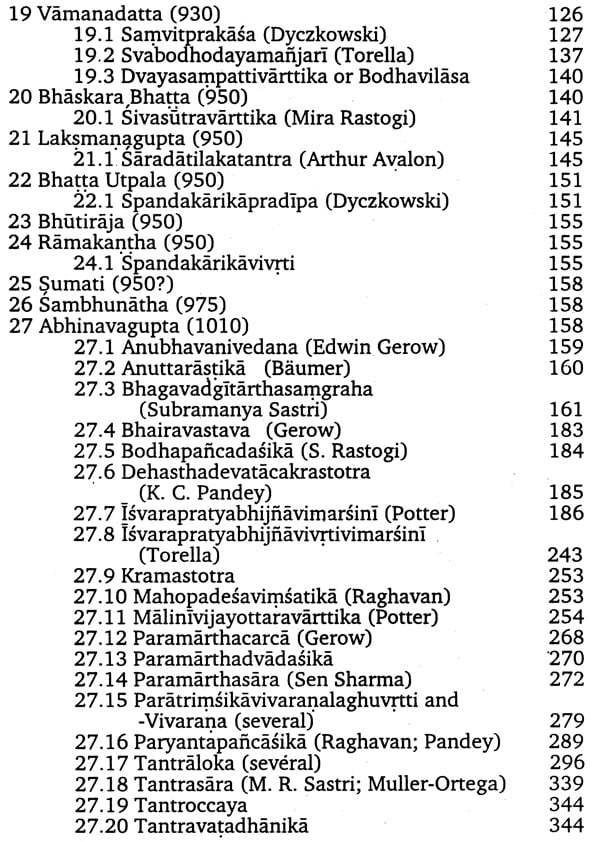 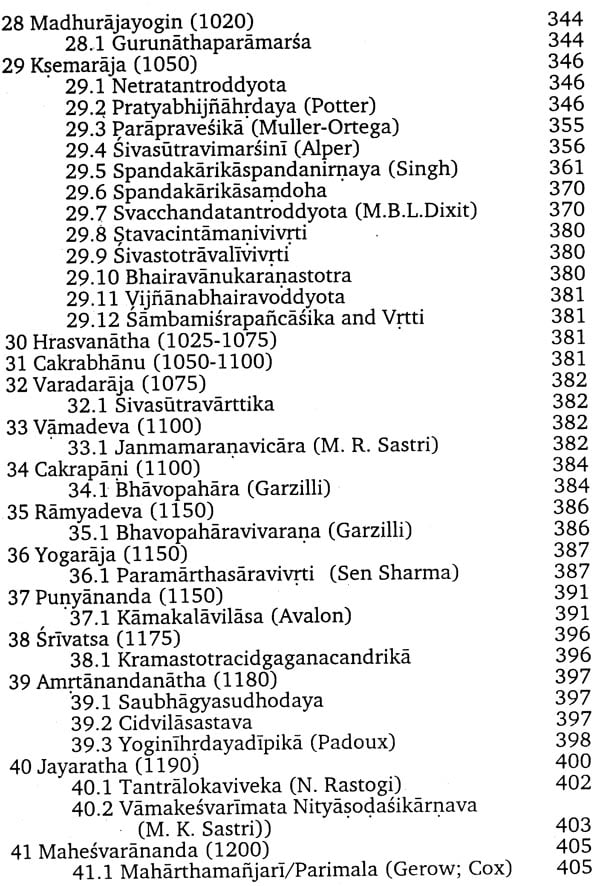 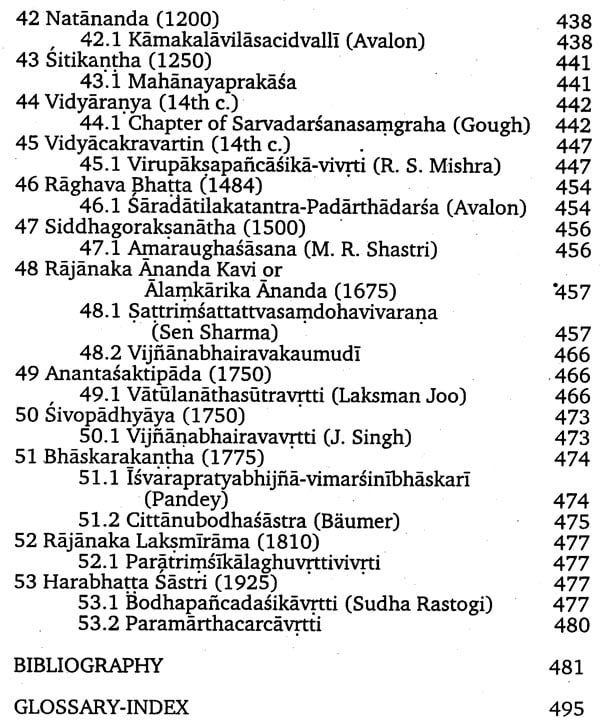 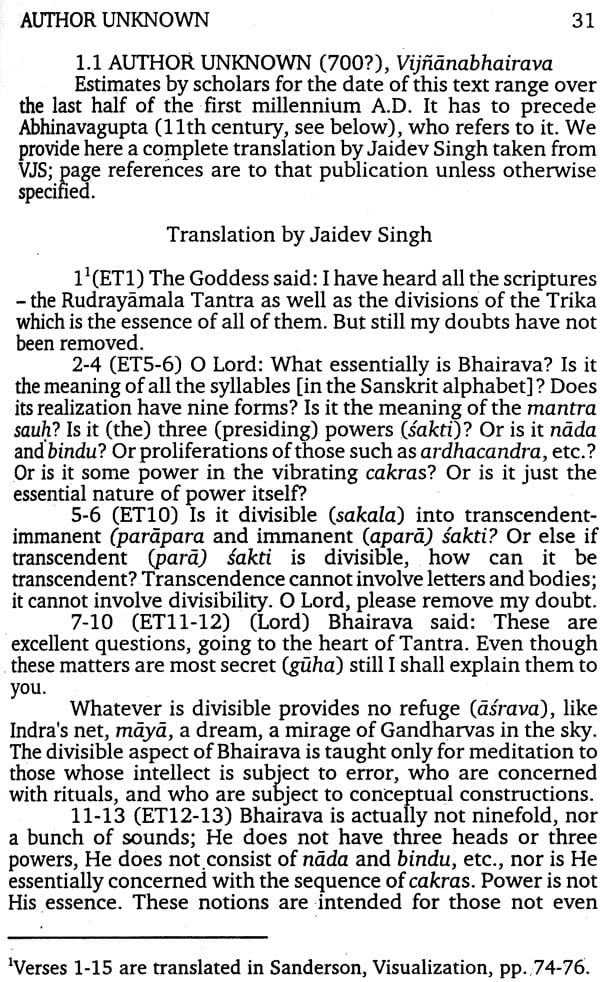 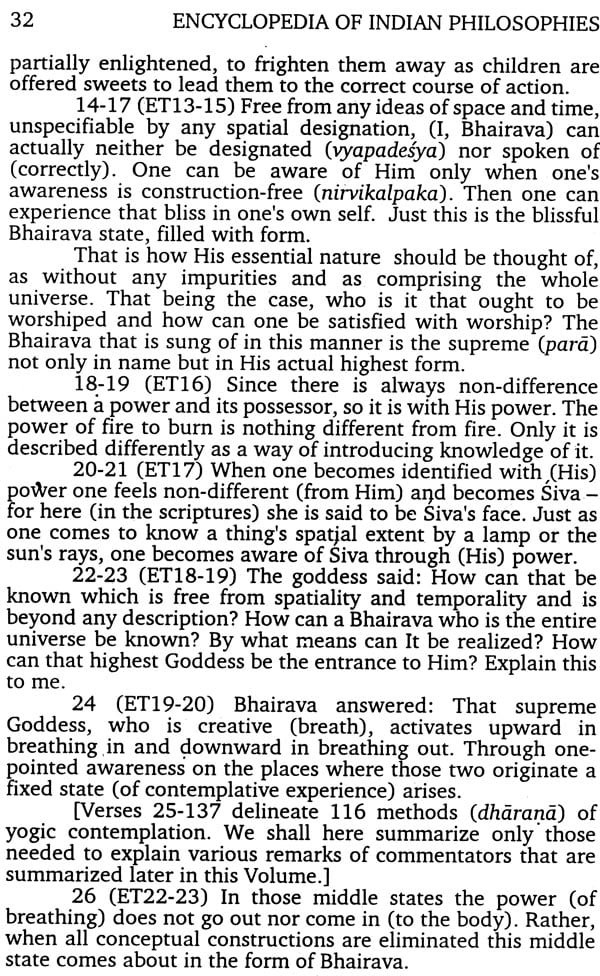 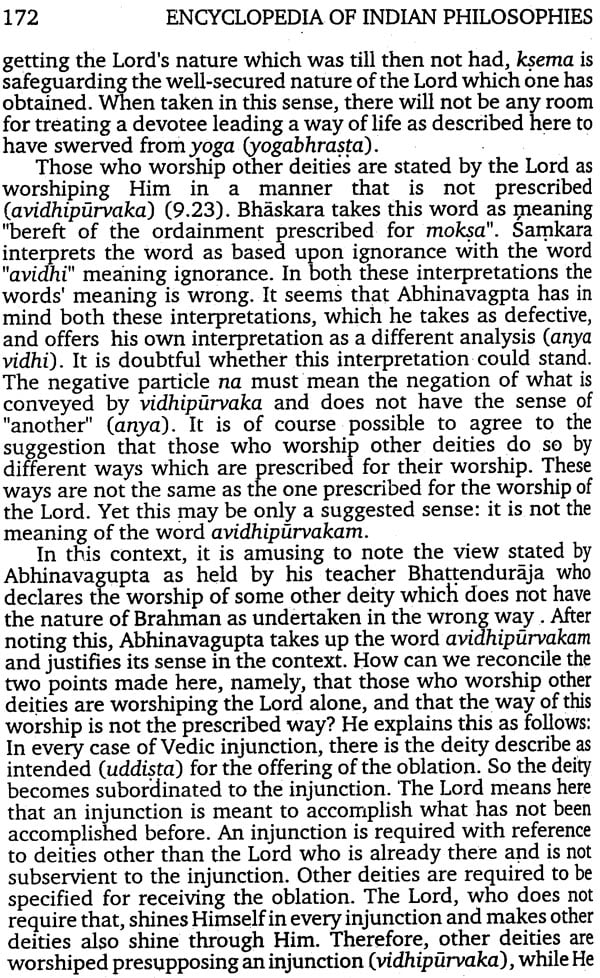 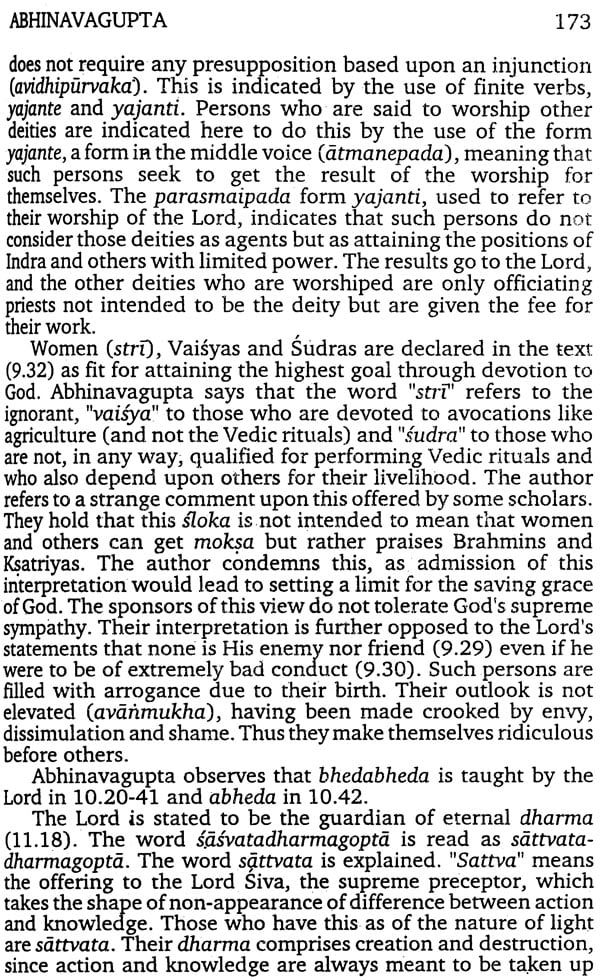 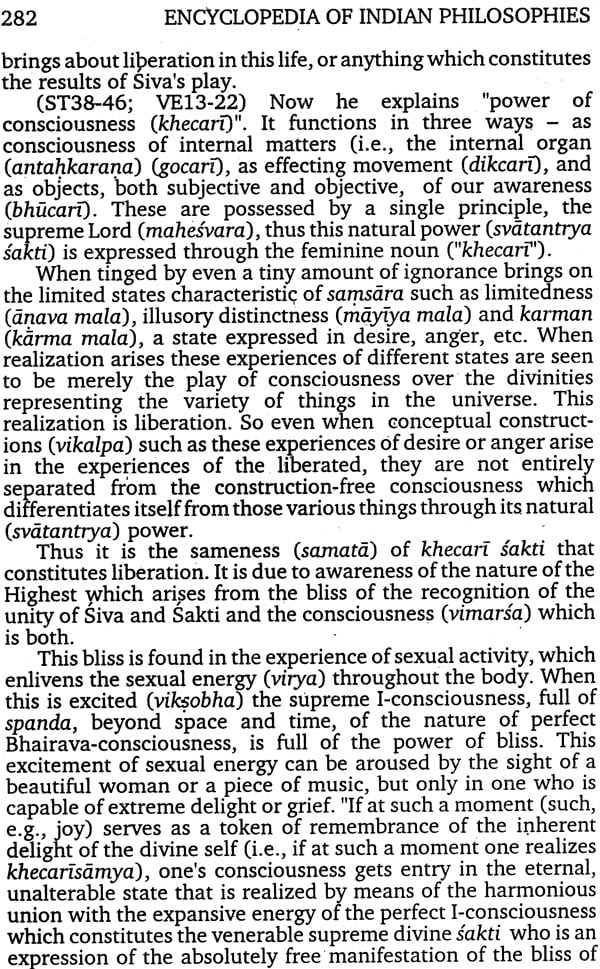 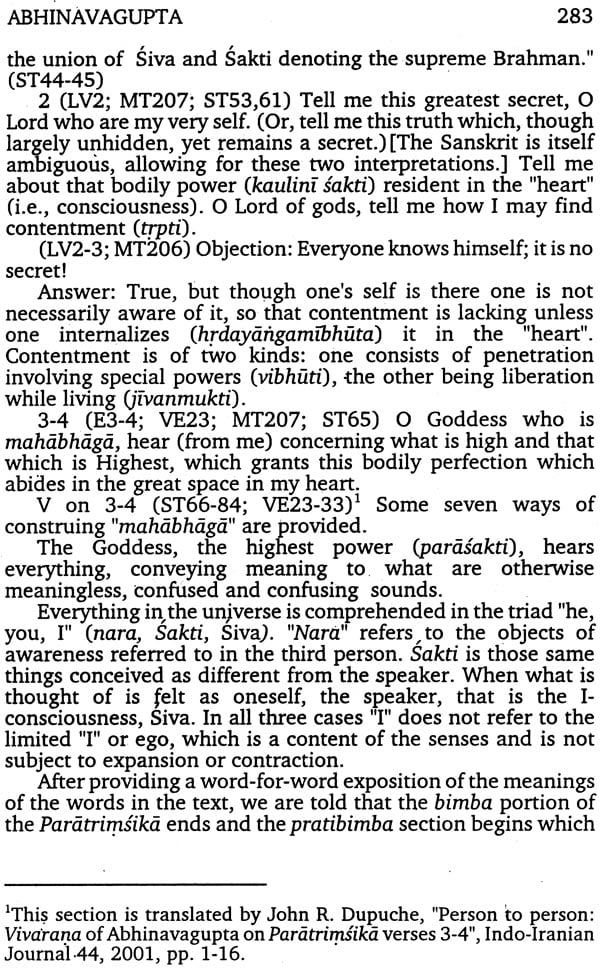 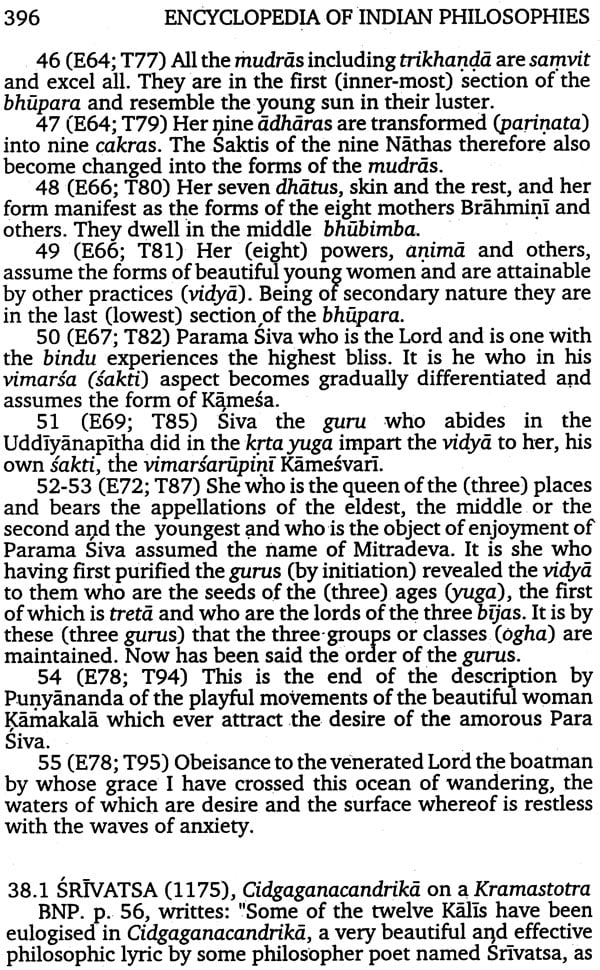 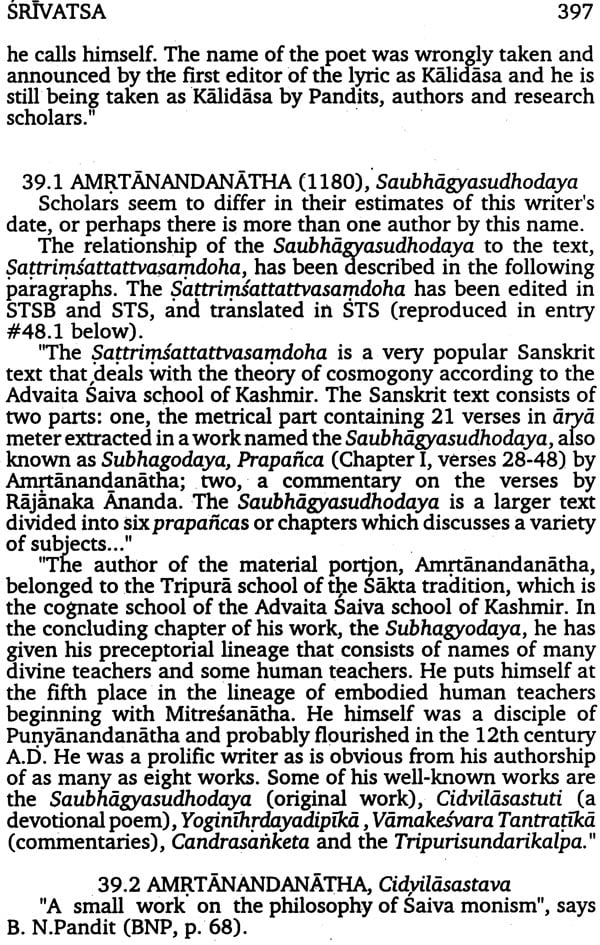 ENCYCLOPEDIA OF INDIAN PHILOSOPHIES Volume III Advaita Vedanta up to Samkara and his Pupils
By Karl H. Potter
$66.40
FREE Delivery
$83  (20% off)

ENCYCLOPEDIA OF INDIAN PHILOSOPHIES Volume II The Tradition of Nyaya-Vasesika up to Gangesa
By Karl H. Potter
$66
FREE Delivery
Book FAQs
Add a review
Have A Question