The Legacy of Padayani (An Old and Rare Book) 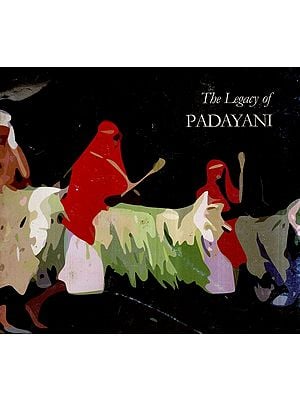 $25.00
Ships in 1-3 days
Notify me when this item is available
Save to Wishlist Send as E-card Share by Email
Introduction

Padayani, the traditional performing art form of Kerala, to be precise, of central Travancore, is the embodiment of so many elements depicting the innate as well as the acquired, the spiritual as well as the temporal elements of societal structure of an ethnic group.

The term Padayani and Pateni are equated. The word Padayani had been evolved by combining two different terms pata and ani both having more than one meaning. In one sense, pata means group of soldiers and ani means rows. Hence the term Padayani can be used to mean the artistic performance of soldiers standing in rows and columns. It is this sense that tempts us to interpret Padayani as part of the martial tradition. Of course, there exists row-wise and column-wise movements in the performance, but it is not a mere martial art form. No doubt the traditional martial culture of Kerala has influenced Padayani; but it is basically a ritual, and not a martial art. In fact, it developed over centuries into a performing art with direct and indirect influences of both.

In another sense, pata means flock, offering, creation, sacrifice etc. and ani means having the quality of, bearing the ornaments or costumes etc. One of the episodes in Padayani is known by the term Pooppata which means the offering of flowers. Besides this literal meaning, Pooppata stands for a type of sorcery devoutly carried out by the lower castes as well as the upper castes to get rid of the hysteria of women and to bless the married women for having children. This is an act filled with theatrical elements. This whole-hearted traditional sacrifice has nothing to do with the so called martial culture.

Further, the term Padachavan means the creator-the Almighty Lord. The term Padachoru means the rice boiled and moulded in a hemispherical shape as an offering to the ,deity. In all these cases, we can see that the martial culture has nothing to do with the terms Pata or Ani.

Linguistically, the term Pateni may be traced to Padayani,But, Pateni has now substituted the more refined and sophisticated Padayani in the hearts and tongues of the village folk. The term Pateni imbibes the sweetness of the rustic, rural and tribal dialects, the taste of the sweat of the villagers who have identified themselves with Mother Nature, the ingenuity of the rustic conscience and the rubescence of the life blood of the untainted, farm folk. However, we need not bother whether the term is Padayani or Pateni, because in content and spirit, both are one and the same, of course with marginal but inevitable regional differences. The invocation of the deity to the main arena, the dedication of the instant artistic offerings, producing the costumes from the natural things, available in the surroundings itself- all follow the same pattern everywhere. Whether you call it Pateni or Padayani, this traditional performance bears the common character of an exorcism, carried out by the villagers in all piety to ward off evil forces.

Again, the strenuous fight between Kaali and the demon or Asura king Daarikan, has become the basics of a variety of traditional performances both within and outside Kerala. Her victory over the demon is explained as the victory of light over darkness, morality over immorality and enlightenment over ignorance. But the myth behind Padayani is not this victory of Kaali over Daarikan, but the victory of Lord Shiva - the creator of Kaali -over the uncontrolled rage and devastative power of Kaali It is this process that leads Lord Shiva to win over Kaali -the expected protector who abruptly turns to be the destroyer. It is the imitation of the victory of the creator over his creation. See the thrill of the situation where the expected symbol of light, morality and conscientiousness turns abruptly to be the living symbol of darkness and immorality. Here, the struggle becomes the struggle for survival and existence. This struggle continues through aeons, and still exists, in every society, in every continent and continues to be relevant today and tomorrow also. Padayani receives social validity and relevance, of course, with situations slightly changing here or there. This mythical situation saturated with thrill, fear, devotion and excitement is an example of an exact exordium very rarely seen in the field of theatre. The theatre opens with confirmation of the will and vigour of the suppressed on the one side and oppressor -the demons - on the other side.

Considering the style of the textual composition and the visual structure of Padayani in total, it can very well informally be divided into three cantos. The first canto consists of the ceremonial perambulations of the Mother Goddess, accompanied by the traditional priest -Oorali-from the lower caste, the return of the deify after receiving the raw rice offerings and the traditional theatrical performance of the perambulating lower caste. The second canto consists of all the main performances of the villages. The third canto consists of the response of the deity on the last day towards the offerings of the devotees and the sending off of the deity to her respective abode by the raw drumming.

If it is in terms of acts and scenes that we demarcate the textual compositions informally, we see that there exists seven acts in total and a number of scenes in each act. Every scene is seen to be complete in itself, in all respects. But an invisible thread connects and controls the developments of the theatrical incidents leading to the catastrophe. The sounding percussions, rhythmic physical movements, with or without masks or headgears, the burning country torches, the hullabaloo - hurly - burly atmosphere created by the villagers, the sarcastic utterances of the expected arrival of the demonstrative protector, the occasional production and projection of the sudden sounding cracks, all alternately either increase the intensity to its meridian level or decrease this intensity by alienating the viewers supplying the essential comic relief at proper occasions. Thus the visual structure of,Padayani takes the form and style of an epic theatre in its true spirit and content. 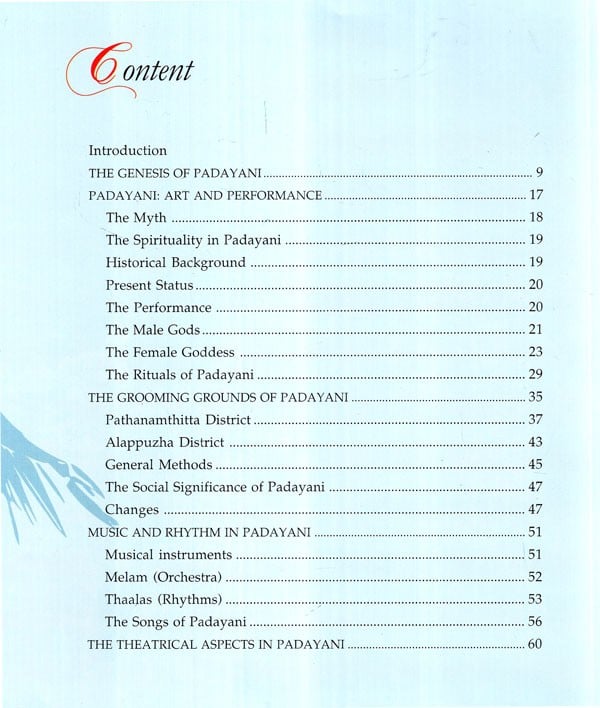 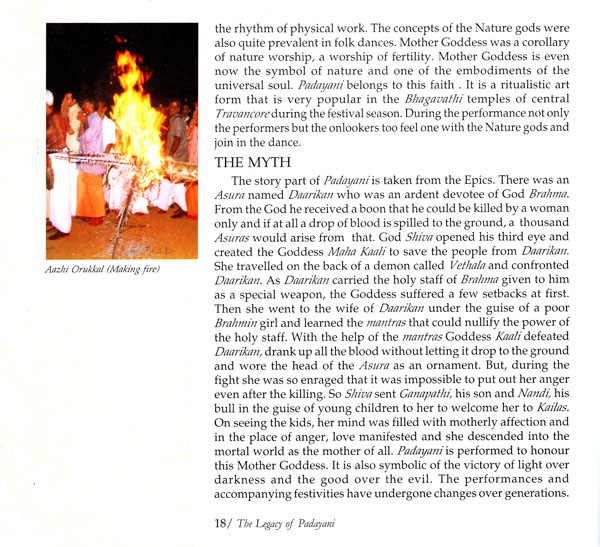 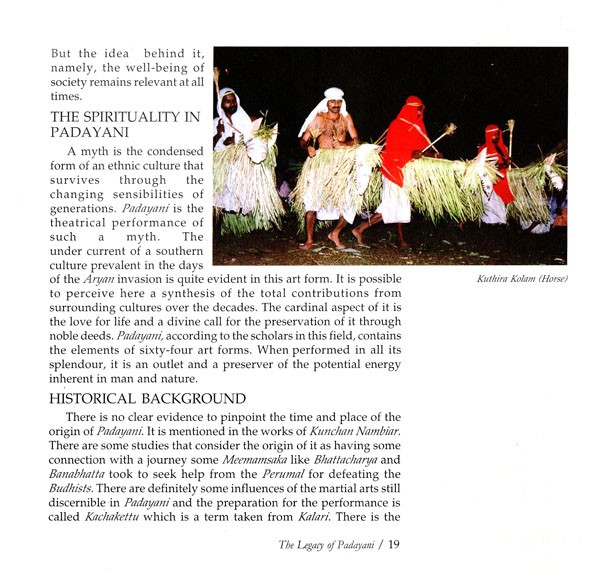 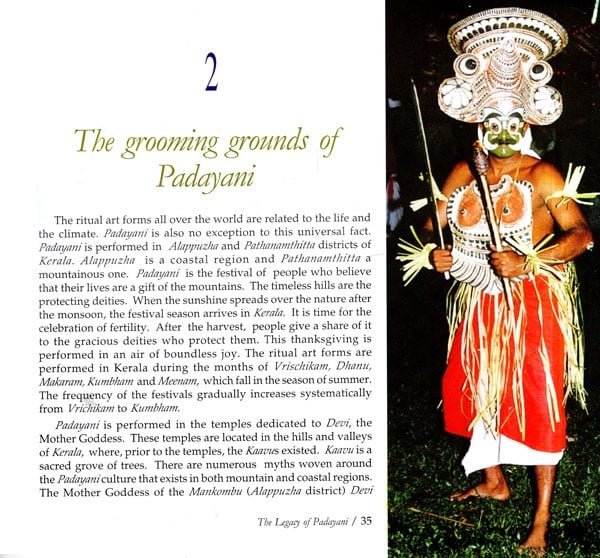 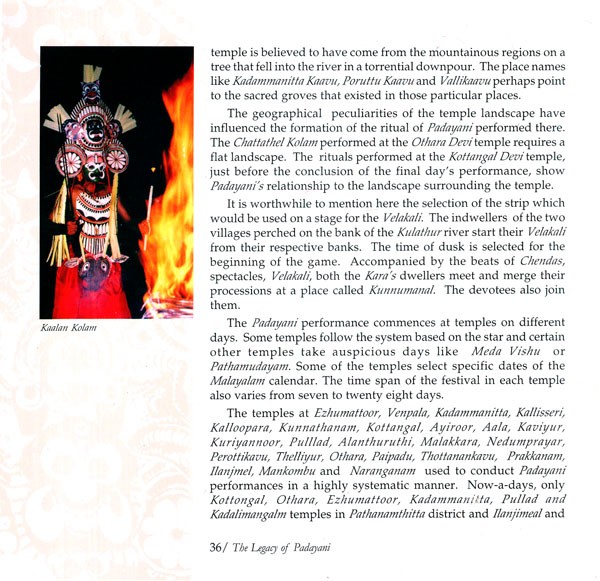