Three chief categories of seekers have been kept in view in selecting passages for this compilation: those who wish to obtain a greater life-mastery and self-mastery; those who, while pursuing the common goals of life, also aim at something beyond the ordinary life and seek to grow towards a higher or spiritual state of being; those for whom spiritual growth is the primary purpose and preoccupation of life….

All of the many approaches for the attainment of mastery and inner growth involve the cultivation of certain attitudes which… are related to inner or psychological states from which we look at and react to everything in life, both within us and outside us. This book deals with such basic attitudes in the light of Sri Aurobindo’s yoga.

Three chief categories of seekers have been kept in view in selecting passages for this compilation: those who wish to obtain a greater life-mastery and self-mastery; those who, while pursuing the common goals of life, also aim at something beyond the ordinary life and seek to grow towards a higher or spiritual state of being; those for whom spiritual growth is the primary purpose and preoccupation of life. The differences in interests and spiritual outlook of these three types of seekers account for the assorted nature of the contents of the book regarding the topics covered and the level of understanding called for.

All of the many approaches for the attainment of mastery and inner growth involve the cultivation of certain attitudes which, as explained in the introduction to this book, are related to inner or psychological states from which we look at and react to everything in life, both within us and outside us. This book deals with such basic attitudes in the light of Sri Aurobindo’s yoga.

In order that the book may have a wider appeal, the selection of passages included here has been limited to those which are apt to be meaningful not only to followers of Sri Aurobindo and the Mother but also to seekers outside this circle. Special terms and concepts pertaining to Sri Aurobindo’s Yoga with which the general reader may be unfamiliar have been explained in the Glossary at the end of the book.

Passages in this book have been derived from two main sources : letters of Sri Aurobindo to disciples, and talks by the Mother to the children of the Ashram. The nature of these sources accounts for the less formal style which characterizes many of the passages.

The contents of the book have been classified into sections and subsections to facilitate understanding and reference. However, many passages could have been included in any of several sections – an overlapping which makes the classification arbitrary to some extent. Therefore, for purposes of reference, the reader may find the Index at the end of the book to be more useful than the table of contents.

This immense difference between man and animal is due to several distinguishing features of their psychological natures. First, consciousness in the human being has developed the power of detachment, that is, of standing back and observing things as a spectator. Human consciousness can detach itself and stand back not only from what lies outsides in the environment but also from internal thoughts and feeling, thus dividing itself into a part that observes and a part that is observed. This power of detachment makes for a reflective intelligence which a human being is capable of exercising as distinguished from the reactive intelligence of the animal. With the power of detachment and a reflective intelligence, the human being can control, modify and overcome the force of instincts and impulses, unlike the animal which cannot act contrary to its innate nature. Secondly, though all behaviour in the animal as well as in the human being is purposive, that is, directed towards the fulfillment of some purpose or goal, the human being, as distinguished from the animal, has the potential of conceiving and pursuing higher goals – moral, intellectual and aesthetic – beyond the basic ones related to physical and biological existence,. Thirdly, the more highly developed human being, in contrast to the animal, is discontented with what he is, and feels an urge for growth towards what he conceives to be an ideal state of being. A fourth distinguishing human characteristic – and this brings us to the subject-matter of this book – is that the human mind, unlike that of the animal, can look at something and react to it from different perspectives. In other words the human being can adopt different attitudes to the same thing, event or circumstance. The enormous significance of this human characteristic is implicit in a statement made by William James, one of the most celebrated psychologists: “The greatest discovery of my generation is that men can alter their lives by altering their attitudes of mind”.

What is meant by “attitude”? The phrase “attitudes of mind” used by James obviously implies that attitudes have something to do with the mind. Thus dictionaries define attitude as “a way of thinking” or as “a mental view”. A further understanding of the term is provided by psychology which defines attitude as an “internal affective orientation that would explain the actions of a person”. This psychological definition indicates that an attitude is not merely a way of thinking but also a way of feeling – an affective or emotional disposition – which determines a person’s actions. In psychological jargon, an attitude has cognitive (thinking), affective (feeling) and conative (willing) components. Therefore, a change in one’s attitude towards a thing, person, circumstance or event implies change in the way one thinks, feels and is disposed to act in relation to the thing, person, circumstance or event.

The psychology of yoga throws further light on the nature of attitudes. Unlike modern psychology which lumps all psychological functions into what is called “mind”, the psychology of yoga looks upon man’s subjective nature as a composite of distinct though intermixed and interacting parts of the being , each with its own characteristic consciousness. This yoga concept of parts of the being is extremely helpful in understanding attitudes, because different attitudes are related to different parts of the being and their different types of consciousness. One’s predominant attitudes depend on the part of the being which is dominant in one’s nature. Broadly speaking, there are two divisions in the human being – the outer being, which constitutes the personality (from the Latin persona, “mask”) , and the inner being, the true Being or the Person who uses the outer mask of the personality. The outer being is only an instrument as a means of expresses; it is not one’s real self. However, ordinarily we are identified with the outer being and regard it as our self. Therefore it is the outer being that usually expresses itself in our attitudes and actions.

The outer being is made up of three parts, each with its own distinct type of consciousness, distinguishable by its characteristic traits or qualities which are reflected in the attitudes pertaining to it. A description of these parts of the being is given below, using Sri Aurobindo;s terminology.

The physical (being): Though people generally attribute consciousness and intelligence only to the mind , and look upon the body as something mechanical, the psychology of yoga reveals that the body is endowed with its own characteristic consciousness and intelligence. It is the consciousness in the body which regulates the complex workings of the different bodily organs and physiological systems. Though the mind exhibits a higher form of consciousness and intelligence than that of the body, it cannot but marvel at the wisdom of the body expressed in the various processes which maintain the body in health and heal it in illness or accident. However, physical consciousness, as compared to mental consciousness, is seen to be relatively inert, obscure, narrow or limited, and automatic or mechanical in its functionings. Thus attitudes which are characterised by rigidity, narrowness, conservatism or slowness to change, indifference or boredom, and habitual or routine modes of action and reaction are related to the physical part of our being.

The vital (being): Intermediate between the physical and the mental is the vital, made up of life-energies, sensation (pleasure, pain, etc.), instincts and impulses (anger, fear, lust, etc.), desires, feeling and emotions. The vital (from the Latin word vita, ”life”) , is aptly so called because it is the source of life-force and seeks after life for its own sake, clinging to life even if it brings more of suffering than of pleasure. The vital consciousness is characterised by likes and dislikes, the search for pleasure and enjoyment, and to avoidance of pain and discomfort, desire to possess and to accumulate . Common attitudes based on the vital consciousness express a hedonistic orientation in life, what Freud referred to as “the pleasure priniciple”. Besides the quest for pleasure these attitudes are characterised by a need for perpetual variety and change, ambitiousness, attachment band repulsion, aggression, fear and impulsiveness.

The mental (being): This is the part of our make –up which has to do with thoughts and ideas, facts and knowledge. Reason and intellect are the most highly developed expressions of the mental consciousness. In contrast to the vital which is governed by the pleasure principle, the mental is guided by what accords with reason and is deemed to be true or good. Therefore when the mental consciousness is predominant in an individual, the attitudes of the individual are characterised by a rational outlook and are based on moral and intellectual principles.

The differences among the parts of the outer being described above illustrated in Table 1 in relation to attitudes towards (1) life, (2) oneself and others, (3) work, and (4) difficulties.

It is interesting to note that he psychiatrist Karl Menninger, in describing the behavior of human being when faced with difficulties and obstacles in life, employs concepts which are analogous to the concepts of yoga psychology mentioned above. There are, says Menninger, five stages in man’s response to life cries: Panic, Inertia, Striving, Coping, Mastery. Panic , a characteristic of the vital consciousness, is often the first reaction to stress because in most human beings the vital is the predominant part of their nature. Inertia which is the chief characteristic of the Physical consciousness, may precede the stage of panic as in the case of individuals who, dominated by the physical consciousness, lead a life of apathy until they are goaded by a dire difficulty which throws them into a state of panic. But the stage of Inertia often follows upon that of panic when an individual, paralysed by an overwhelming difficulty, resigns himself to it or tries to escape from it. In terms of yoga psychology, such an individual, normally living predominantly in the vital consciousness, temporarily regresses as a result of stress to a state dominated by the physical consciousness. However, sooner or later, the majority of individuals recover at least to some extent from the initial reactions of panic and inertia, and learn to confront and combat their difficulties, thus entering the stage of Striving. 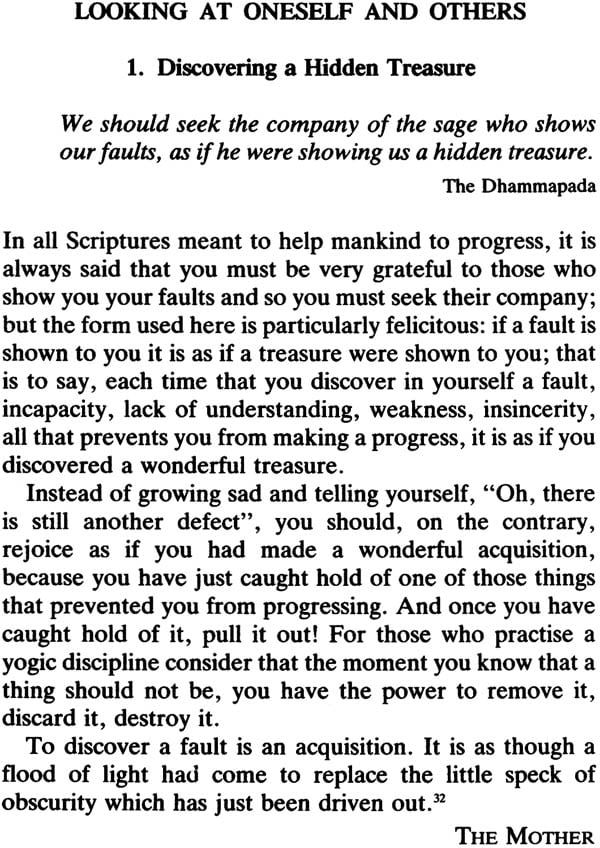 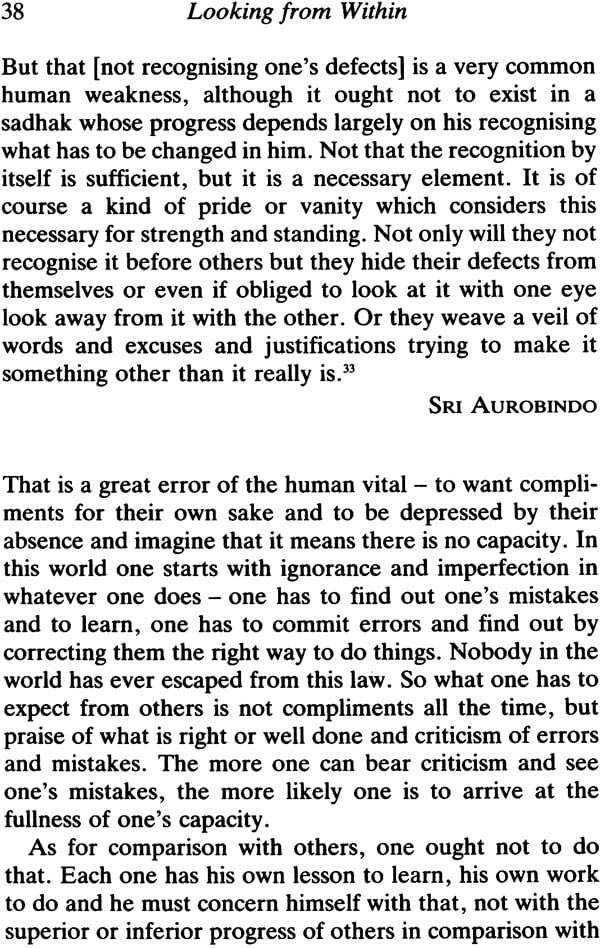 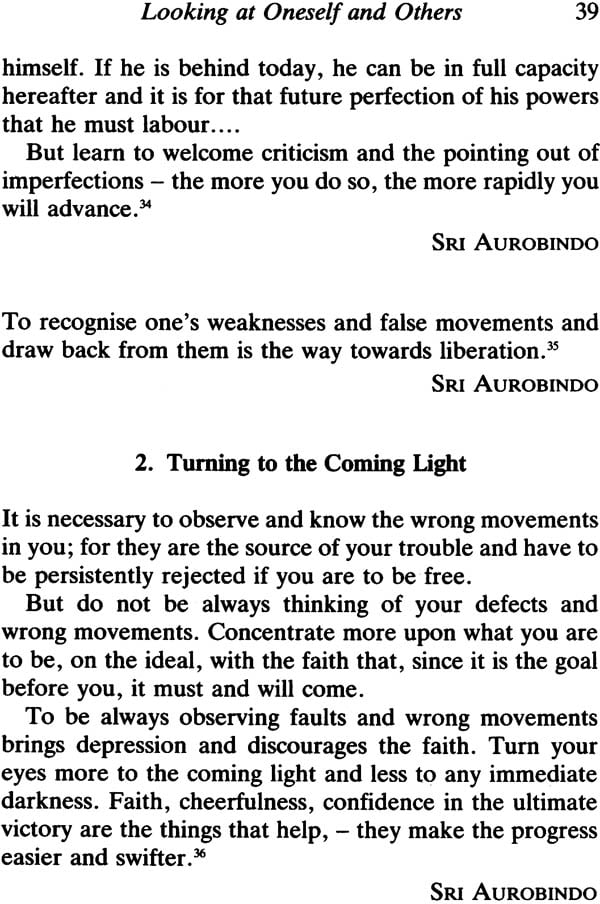 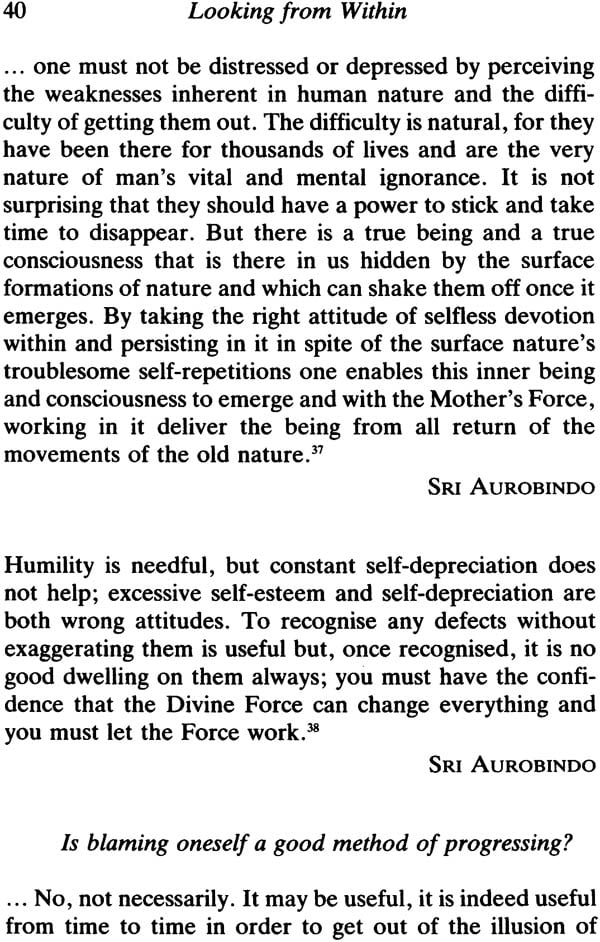 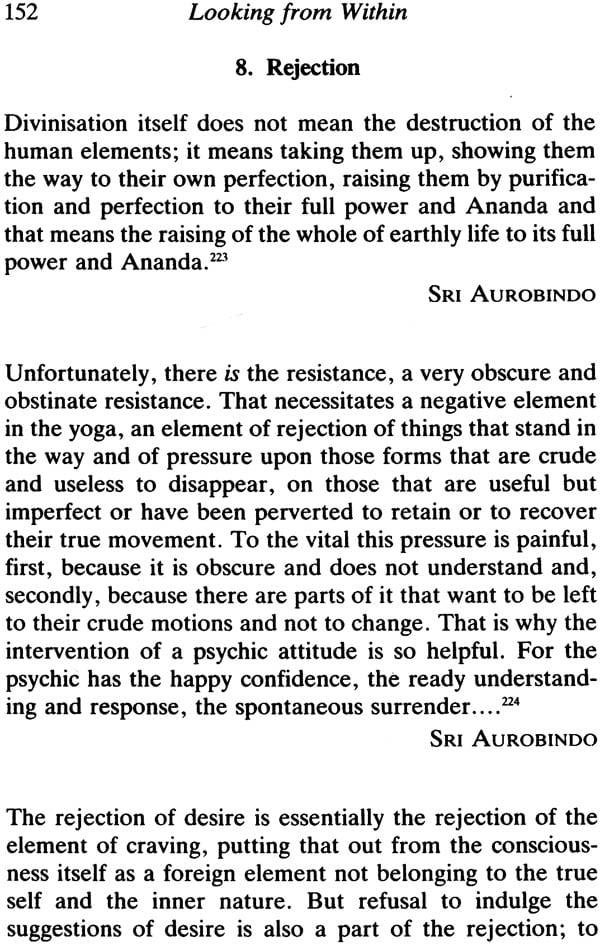 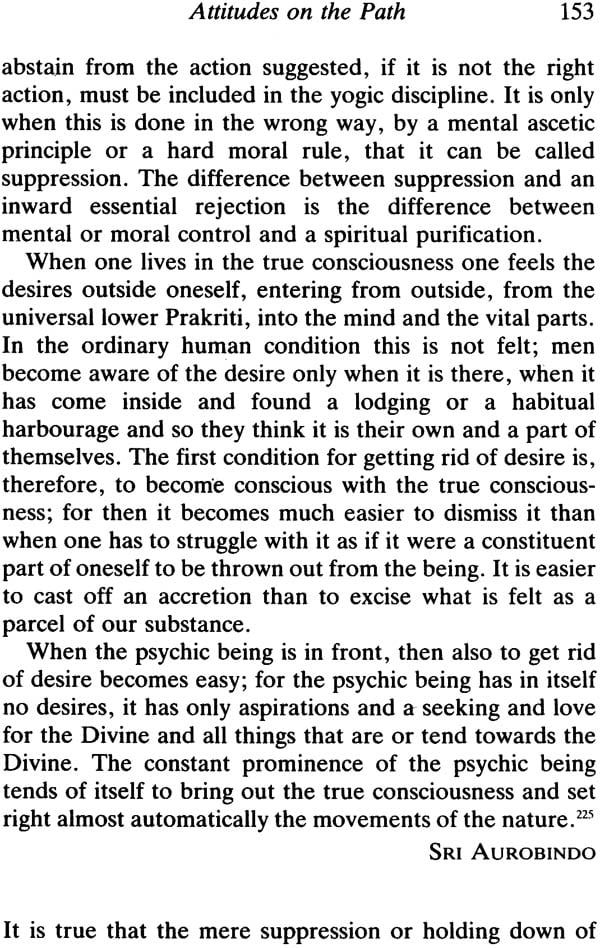 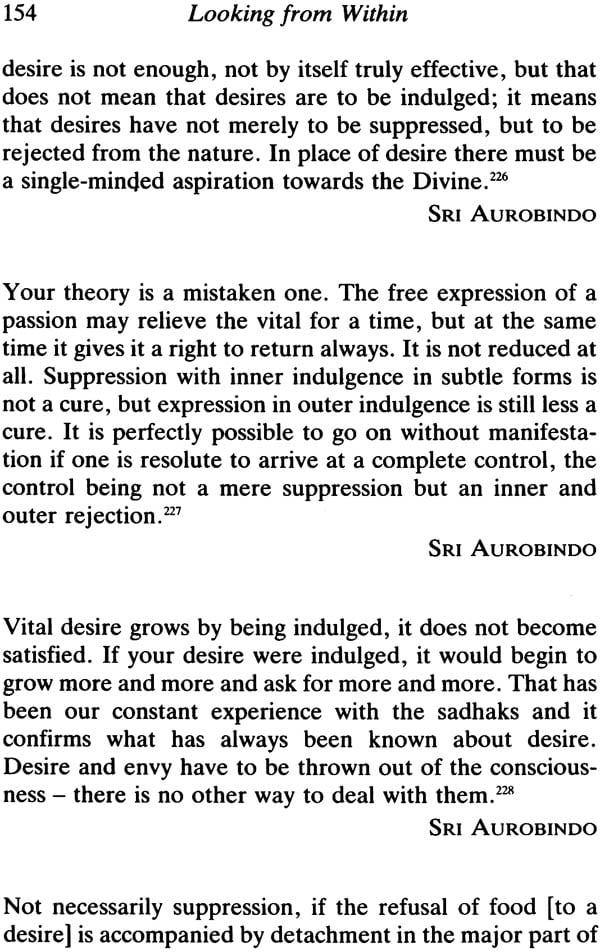 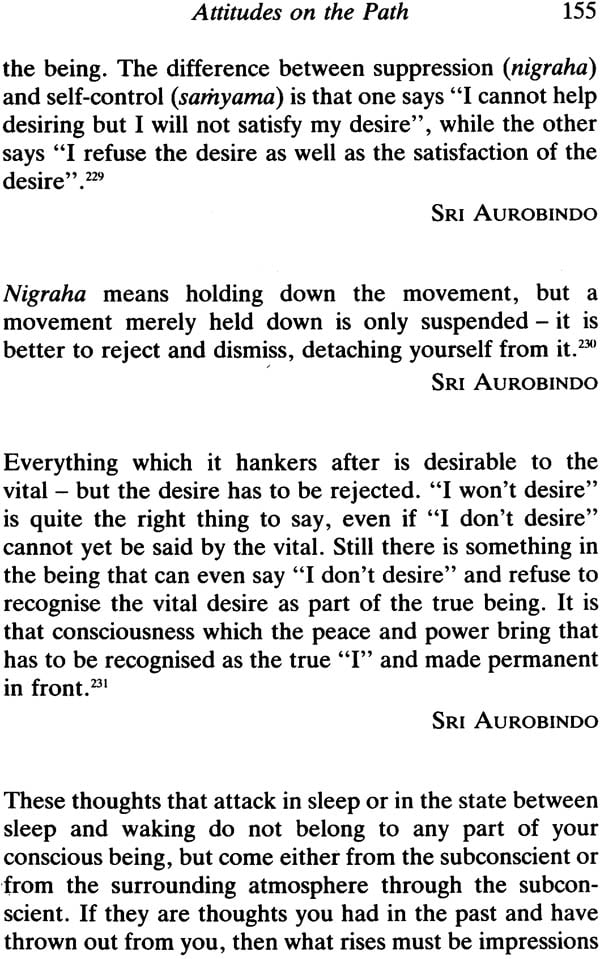 The Mother (of Sri Aurobindo Ashram)
By Prema Nandakumar
$18