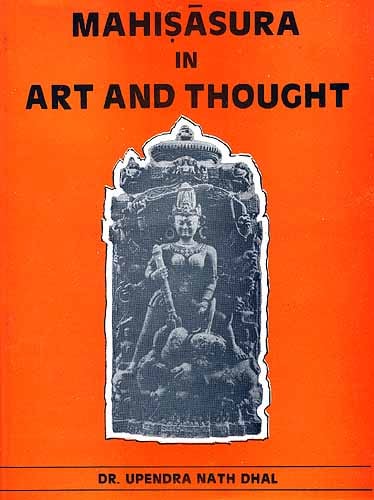 The Asuras belong to one of the primitive tribes of the country, who contributed a lot for the development of our culture and civilization. The authors of our ancient literature do not seem to have done justice to them, rather instead of recognizing their merits have tried to mutilate branding them as uncouth in form and savage in habit and so on and so forth. It may be due to the fact that the Asuras had a distinct way of life of their own, which was different from the Aryans a such they used to clash. Due to such cultural conflict. Sometimes the Aryans had to bow down but in the long run the Asuras had to admit defeat no doubt. Though conqused physically, the Asuras used to conquer them culturally.

The present monograph on Mahisasura deals with the study of the culture of the Asuras in general and Mahisasura in particular as a representative of the tribe, which is still alive in India uptil now. The work not simply accepts the materials for study from the library works but also from such sources like archaeology, anthropology, sociology, sculpture and the like to present a balanced view on them. Besides studying the origin and development of the Asuras, in general from various sources, the myths relating to Mahisasura, his genesis and his conflict with the Vedic gods leading to his defeat and discomfiture in the hands of the Goddess who combines the energies of the Gods, but who had clearcut pre-Aryan affiliation are properly studied. Due to assimilation of cultures, our popular faiths and beliefs record the adoration of Mahisasura along with the mother Goddess Durga in Navaratra festival. The position of Mahisasura in fold beliefs and practices are also given due recognition. Our sculptors and the authors of the treatises on iconography have never neglected him. Rather the image of Mahisasura is invariably enjoyed to be sculptured alongwith the Goddess duly engraved stones and other materials since hoary past. It is hoped that the work would throw new light on the rich cultural background of the Asuras in general and Mahisasura in Particular.

Sri U. N. Dhal had his MA, B.Ed. and PhD from the Utkal University, Bhubaneswar and teaches in the P.G. Department of Sanskrit, Utkal University on Epics and the Puranas, Indian Culture and religion. The topic of his research was "Goddess Lakshmi: Origin and Development"

Apart from being associated with learned organizations like All India Oriental Conference, Bhandarkar Oriental Research Institute etc. he uses to attend various conferences, seminars/ Symposium of both national and international and contributes papers for discussions. Thus he has got a large number of papers published in various journals of the country and different prestigious volumes etc. as well. His published works include Goddess Lakshmi: Origin and Development, The Glory that was Virajaksetra Ekamra Purana. Besides he has certain other unpublished works which await publication. Presently he is working on the Studies in the Ekamra Purana.

VARAHA (In Indian Art, Culture and Literature)
By Shanti Lal Nagar
$48
FREE Delivery
$60  (20% off)
Add a review
Have A Question