This Ethnographic Research Series represents one part of a larger research project undertaken by the Central Department of Sociology and Anthropology at Tribhuvan University from 2011 to 2013 to design a Social biathlon Atlas and Ethnographic Profiles (SIA-EP) for Nepal. [he SIA-EP project has !Our interrelated components, including a country wide Nepal Social Inclusion Survey (NSIS), a Nepal Multidimensional Social Inclusion Index (NSII) combining original surveying with the findings of other recent surveys and the 2011 Census, a Social Inclusion Atlas that maps caste/ethnicity data, and finally a series of Ethnographic Profiles describing the 42 highly-excluded communities of Nepal. the overall objective of the SIA-EP research was to promote a more informed understanding 01. Nepal's- social diversity by producing research based on the most current information of the country's cultural and linguistic diversity and the status of social inclusion of different .social group. The combination of quantitative and qualitative inforrmation produced through this research is expected to contribute to policy design, research, and education.

The Mali people of the Tarai are an occupational caste of Hindus known for their horticultural and gardening skills. They cultivate and sell flowers in addition to preparing garlands and other floriculture products for so-called high-caste Hindu families. The Mali also produce a number of accessories for use in religious rituals, such as the maur (a ceremonial wedding headdress) the jhanp, and the fulgeduwa. The Mali are permitted to enter areas sacred to Hindus without having their feet washed but are not permitted to wash the feet of other caste groups. In addition to floriculture, the Mali people are known for their treatment of measles which they believe to be the result of the curse of an angered goddess. Treatment consists of a number of rituals performed by a jhankri or shaman. Major Mali clan groups include the Mahlauri, Saini, Bhagat, Bhandary, Mali, Malakar, Phule, Suman, Pushpad, and Shreemali.

The Mali have lived in the Tarai region since ancient times. Mali settlements are scattered from Jhapa in the east as far as Bardia in the west; there are also a small number of Mali settlements in the hilly region. Despite this wide coverage, they make up only 0.06% of Nepal's total population. According to the 2011 Census, there are 14,995 Mali in total - 7,628 males and 7,367 females.

The term Mali comes from the Sanskrit word mala meaning garland. Although there are no documents detailing the origins and development of the Mali people, they are mentioned in several Hindu religious texts in relation to their work with flowers. Mali people believe that they are the descendents of Sathrughan, the youngest son of the mythical king Dasarath of Janakpur. They also believe that Sudama, a close friend of lord Krishna, was from the Mali caste. Like the Nuniya people, Mali claim that they are from the Suryabansiya Chhetriya caste group (Mahato, 2068 B. S. p. 24).

This study of the Mali people was conducted in Alau Village Development Committee (VDC) in Parsa district. There is a difference of opinion as to how the village got its name. Some state that it is named after the malaria epidemic that occurred when Alau used to be surrounded by dense jungle (Aula being a corruption of aulo (malaria)). The village is also famous as being the site of the Alau Massacre of 1847 which occurred following the dethronement of King Rajendra Bikram Shah by Junga Bahadur Rana and the subsequent installation of Prince Surendra (Regmi 1958).

Although the Mali people are identified as Tarai natives, the majority of today's population comprises immigrant Mali from India. A Mali community has resided in Alau VDC for around four generations. According to one respondent, the lands around Alau were granted to the Mali people by the then king to show gratitude for treating him while he was sick.

The research was carried out using a combination of key informant interviews, case studies, and observation. Following an exploratory visit set up by the NSIS (Nepal Social Inclusion Survey) team who had previously visited the area, the researcher was introduced to Jwala Prasad Mali a local activist. Jawla Prasad arranged food and accommodation for the researcher for the duration of the field visit.

Field researcher was Mr. Sujit Kumar Saksena who spent field 66 days in the villages of Turaha and Siman in Alau VDC, Parsa district. Alau lies to the south west of Birgunj municipality and straddles the Indian border. Mali communities live on both sides of the border which is not clearly demarked.

As the field researcher hails from the Tarai, it was not difficult to build rapport with the Mali community. The researcher was also able to speak some Bhojpuri - the language spoken by the Mali - although his native tongue is Maithili. In order to familiarize himself with the study area, the field researcher visited a number of local public places including the Lato Mai, Bajarangbali and Sato Mai temples where the Mali worship and the Rastriya Prathamik school in Siman. He also conducted key informant interviews with individuals who have knowledge of local culture, in addition to a number of focus group discussions.

As the majority of the Mali community is busy during the day time, interviews were conducted in either the early morning or early evening. The researcher made contact with the community at the grocery or tea shops that the local people regularly visit. One such tea shop in Shiwadhari Bhagat is very popular with local males from different caste and ethnic backgrounds. The researcher used this tea shop as a base from which to schedule key informant interviews and to build rapport with the locals. The researcher collected information about the origins, history, clans and lineage of the Mali, and about how Alau came to be named. He also gathered genealogical information about six local Mali, although none of them were able to trace their family history back for more than four generations. Many of the Mali are uncertain as to when their ancestors came to live in Alau.

Mali maijans (traditional leaders) from Turaha and Siman were also interviewed, and provided the researcher with insights into the ways in which the role of the maijan has changed over the years. Ramdev Mali, the national president of the Mali Uplift Front was interviewed in Bhadaja VDC in Saptari district. The researcher also travelled to Mali-Kuti, an important religious site for the Mali people located around 100km from Alau in Dhanusha district. Secondary data were gathered from ward offices and educational institutions in Alau VDC.

The approach used to conduct this field study allowed the researcher to collect a large volume of ethnographic data in a relatively short period of time. Mid-way into the study, the researcher was joined by research team leader Dr. Binod Pokharel, who carried out some of the key informant interviews and reviewed the field notes thus far produced. 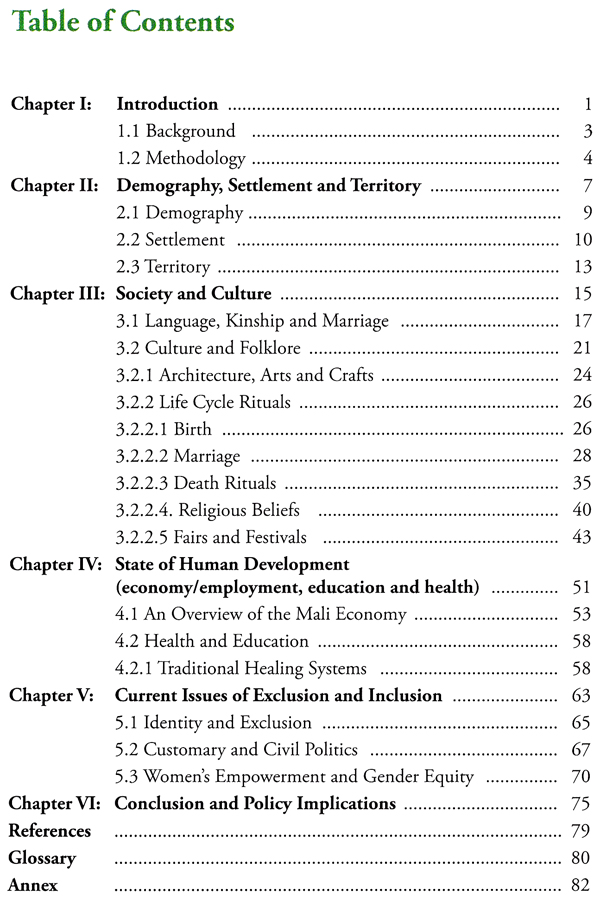 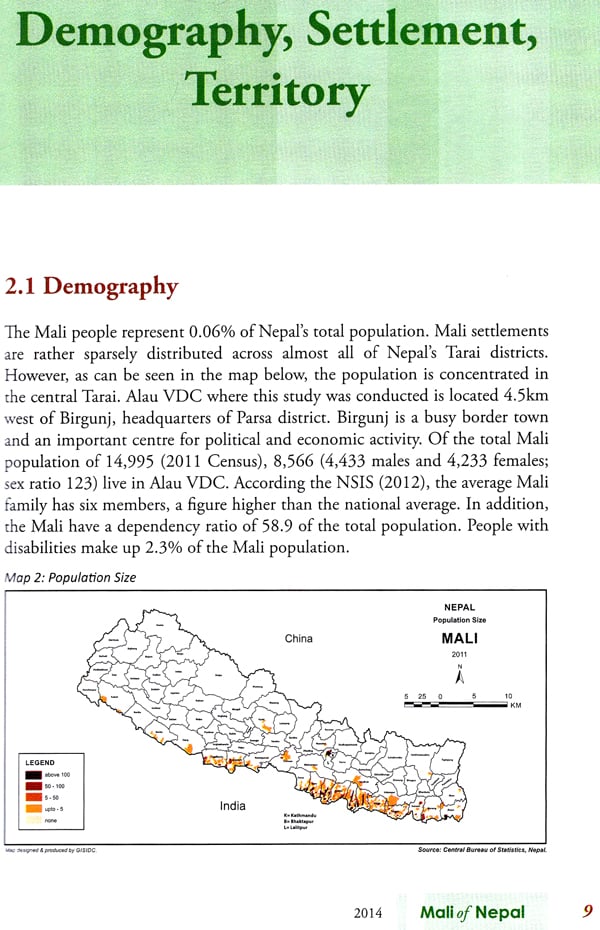 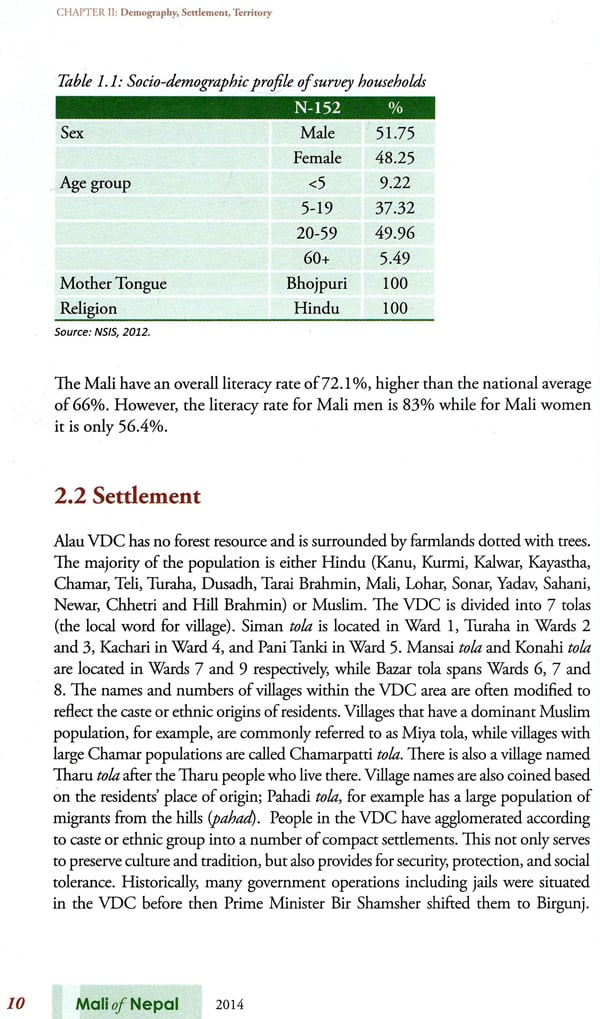 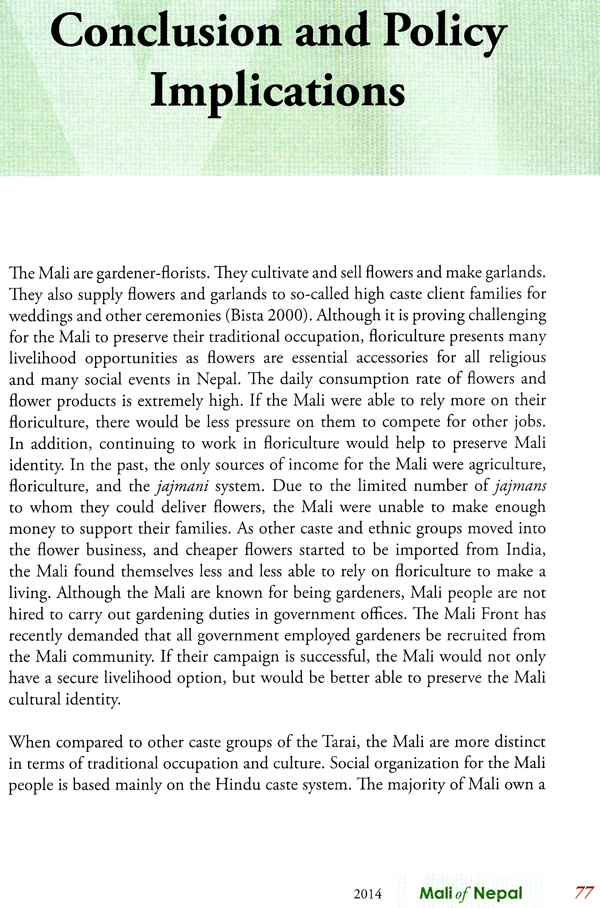 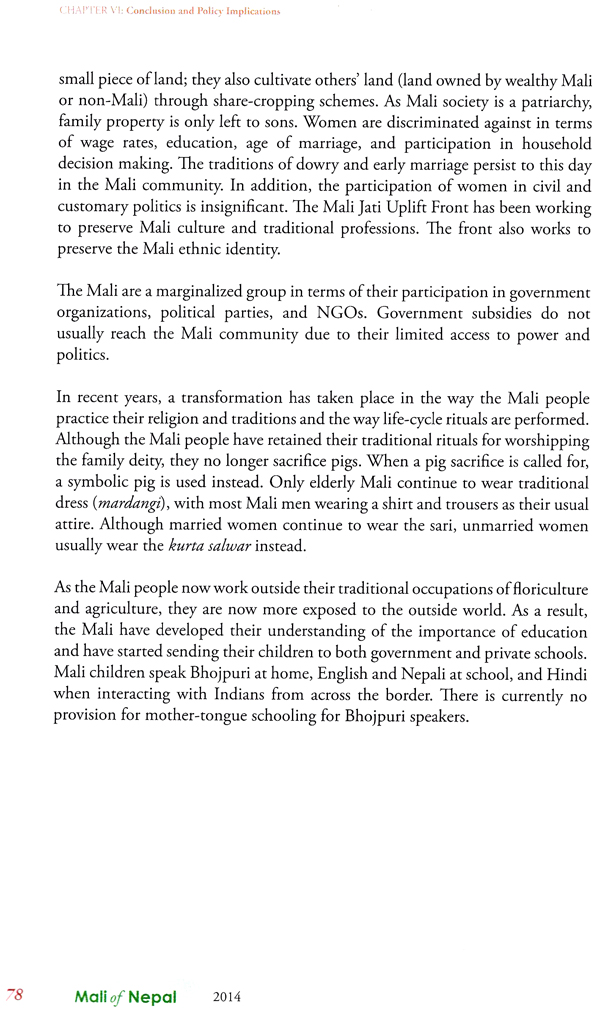 Where Rivers Meet (A Tibetan Refugee Community's Struggle to Survive in the High Mountains of Nepal)
By Clint Rogers
$47.20
FREE Delivery
$59  (20% off) The Cultural Heritage of Nepal, Before, During and after the 2015 Earthquakes - Current and Future Challenges
Publisher Vajra Books, Nepal
$71.20
FREE Delivery
$89  (20% off)