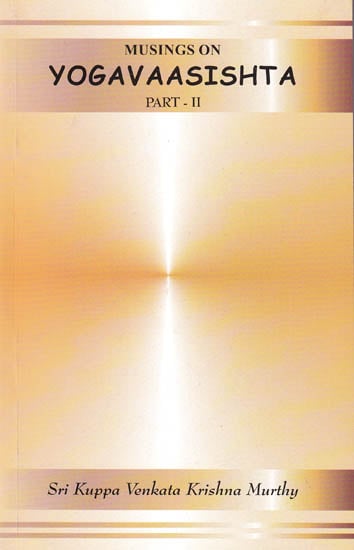 It is the solution given by Sage Vasishta when Sri Rama was caught in the storm of doubts regarding the ultimate nature of Supreme-self.

It is the solution in the form of logical deductions and practical observations for a better understanding of the nature of Supreme-self.

It is a correlations of apparently divergent references of Upanishads.

It is a poetic classic but allegorically explains the absolute and presented in his unique, graceful way by the sage poet Valmiki

It is a presentation from Brahmasri Kuppa Venkata Krishna Murthy, the Vidyadhikari of Avadhoota data Peetham Mysore in the form of his “Musings on Yogavaasishta – III (Sustenance)” – a treatise of comparisons and correlations of the ancient traditional knowledge and the modern scientific knowledge, through his lectures in the Gemini T.V on “Yogavaasishta”.

‘Yogavaasishtam’ is a very useful book for all those who know many things in the spiritual line, or who do not know any thing in that line, and who wish to enter into that line. To know about spirituality is different and experiencing is different. Our endeared devotee Kuppa Krishna Murthy experienced spiritual flavor in all the three ways due to his continual presence at the feet of Sadguru. So your Swamiji has been using him as His mouthpiece to serially analyse and explain this rare classic the way He wanted through the TV Channel for his devotees and the entire mankind at large and also go this trentise written by him.

My series of lectures on Yogavaasishta, since the last two years, in Gemini T.V has reached the hearts of many listeners of varied classes, bringing satisfaction to these aspirants in philosophy. It is much more heartening to people like me, who are earnestly desiring always to bring this profound subject to within the comprehensible reach of common man.

Dr.D.R.Rao and Smt.Vijaya has brought out these lectures on the first two chapters as Yogavaasishta Hridayam — Part I in Telugu during 2002 and its English version as Musings on Yogavaasishta — Part I during 2003; the second part of Telugu version during 2004. But for their resolution, my indolence would have been victorious.

Who will believe this chapter that is loudly broadcasting that this world do not exist at all from metaphysical aspect? Who will understand Valmiki Maharshi’s intricate logical arguments or discussions brought out or made through Vasishta Maharshi? How far the modern intelligentsia that has been brought up the modern scientific background or base can understand this? — The feedback given to me through some listeners of ultra modern culture and NRIs has shown me that all such sceptical thoughts are baseless imaginations only. Tb express my hearty satisfaction over this feedback, two such impressions are enclosed herewith.

Science is logic. Philosophy is also logic. That is one branch. This is another branch. It is not a difficult task to move from one branch to another, once you climbed the tree. To prove that one who has studied the modern sciences with a razor sharp intelligence can also understand philosophy that has been conveyed logically, these two letters are enclosed herewith. That is why; I am not conveying my special gratitude to them. I am congratulating all such intelligentsia, silently, within myself.

The preface given in the first part is also added in this with the hope that it will help the reader to have a better comprehension of the original version.