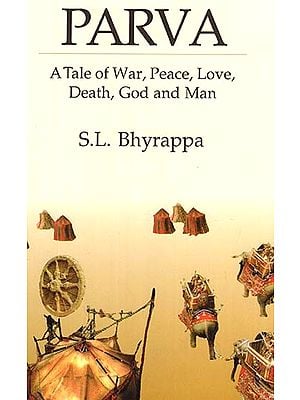 Parva is acknowledged to be S.L.Bhyrappa's greatest work. Non Kannadigas who have read it in its Hindi and Marathi translations consider it one of the masterpieces of modern Indian literature. It is a transformation of an ancient legend into a modern novel. In this process, it has gained national credibility and a human perspective. The main incident, the Bharata war, symbolic of the birth pangs of a new world-order, depicts a heroic but vain effort to arrest the disintegration and continue the prevailing order. It is viewed from the stand points of the partisan participants and judged with reference to the objective understanding of Krishna. Narration, dialogue, monologue and comment all are employed for its presentation. Shot through with irony, pity and understanding objectivity, the novel ends with the true tragic vision of faith in life and hope for mankind.

S.L. Bhyrappa is one of the foremost Indian novelists writing in Kannada. Born in 1931 in Santeshivara, a village in Hassan district in Karnataka, he took Ph.D degree in Aesthetics from M.S. University and then taught Philosophy at Regional College of Education, Mysore for twenty years.

Author of more than twenty five novels, four volumes of literary criticism and an autobiography, Dr. Bhyrappa is a major voice. VanshaVriksha, Daatu, Saakshi, Parva, Sartha Thantu, Mandra which won the most prestigious award Saraswathi Samman and Avarana which has gone into 55 reprints. Bhyrappa represented India on several literary assignments to various parts of the world. Recipient of Karnataka Sahitya Akademi Award (twice), Sahitya Akademi Award(1975). He is Fellow of Sahitya Akademi, National professor, recipient of honorary doctorate from seven universities. Most of his books are best sellers in their translations in almost all Indian languages including English and Sanskrit.

K. Raghavendra Rao (1928-2020), the translator of this novel was a Professor of Political Science. Has published a number of books in English and Kannada. Spring Fire (Bendre's poems in English), Modern lndo-Anglian Poems (edited with P.Lal), Modern Kannada Poetry (edited with C.S. Kanavi), The Peacock Smile, a critical study of Bendre, deserve special mention.

MY THINKING about the historical veracity of the events of the Mahabharata. began about twenty years ago, (1965) when I was roaming round in the Gadhwal area in the Himalayan region, I had the occasion to spend some time in a small hamlet which practised polyandry. The local folk believed that this custom had been in existence since the time of Draupadi. The practice was predominant in the rural areas of two Taluks. Later I visited Pandukeshwar, nestling in the green land between Badri and Josimath, where I learnt the details about the local customs and history. It was then that I began to conceive hazily some of the characters in Mahabharata. From 1971 on, I was deeply engaged in serious research pertaining to the historicity of the epic. After a thorough reading of the original Vyasabharata, I undertook a detail investigation into the economic, political, religious and social life during the last phase of the Vedic culture. After a study stretching over years, in 1974 I toured and briefly lived in those parts of the Himalayan region which were associated with the Mahabharata. Subsequently in 1975, I visited and studied Dwarka, Aravali ranges, Viratanagar, Mathura, Delhi, Kurukshetra, Hastinavati, Barnava, Chakranagar, Rajgir and other places connected with the epic. But prior to this study tour and investigation, I armed myself with the necessary knowledge, thanks to the help of Dr. Ramesh, then with the Mysore unit of the Archaeological Survey of India. Mrs. Leela, incidentally a granddaughter of the great teacher and scholar, A.R.Krishnasastry, who was on the staff of the Library of Mysore University, assisted me generously with relevant books and documents. Throughout my researches, Sri N. Balasubrahmanya played a key role in helping me clarify my ideas on the subject, through intense discussions. At one stage, such help flowed from Pa. Vem. Acharya. Experts like Dr. J.J. Thakur, Acharya Devendraji Sharma and Dr. H.A. Phadke provided me with historical data pertaining respectively to Dwarka, Viratanagar and Kurukshetra. In Delhi, Dr. B.V. Subbarayappa, Chief Editor, Indian Council of History of Science, placed at my disposal very useful material.

I wrote this novel between 12 October 1975 and 27 December 1976, covering a period of one year and two months. M.S.K. Prabhu and N. Balasubrahmanya read the manuscript. These friends enabled me to gain a critical perspective on my own work. When I was wrestling hard to pick a suitable title for the novel, Ha.Ma. Nayak, helped me to settle on the title, Parva .

Both during the preparatory stage and the writing stage, a number of well-wishers extended to me their helping hand, directly or indirectly. In this connection I may refer to a long article of mine, which gives a detailed account my preparatory research and the various ideas that dominated me at different stages, as also the actual writing of the work itself. Since it would be unfair to inflict that work on my readers here, and it is a long 50 to 60 pages stuff, I shall content myself publishing separately that material under the title, "Why do I write?". However I do think it would not be out of order here, to focus on some important issues discussed there.

"I must confess that I have no adequate evidence to confirm or disconfirm beyond dispute the existence of Dwaraka, referred to by Dr. Thakur. Moreover, that is not a matter of interest to me. In the backdrop of the scholarly material I had read and digested regarding Lothal, Harappa and Mohanjo Daro. I think Krishna's Dwaraka is at least plausible. Having travelled in this area, and watched the scene from the tower of the light-house on the coast, I am ready to say that I found myself going back to the days of the Yadavas, released from the restraints of 1975. The town of Dwaraka as it must have been then, the sea, the life of its inhabitants, and its physical environment, became a part of my personal experience. While dealing with events of his contemporary period a writer has no problem with factual details. They are already there, present in him subconsciously. He need only recall them to serve his contingent purposes. But historical details do not enjoy the status of being subjectively so immediate and internal. They persist as objective scholarly data, resisting any internalisation. But Dwaraka had become part of my internal experience.... I felt as if I had actually been there in Dwaraka, and knew like the back of my hand its streets and lanes. I felt confident that I could negotiate them without difficulty and with skill.

" Near a place called Viratnagar in Jaipur district, where the fight over Gograhana, a minor Kurukshetra, had occurred, there is a cave called Bhima's cave....It is a local custom for newly- weds even today to visit the cave and offer worship to Bhima. At the time I was visiting it, there was a newly- wed couple. I asked the new groom aged sixteen years about the purpose of his worship. Straight came the reply:' Should anyone cast his eyes on my wife, God Bhima will grant me the power to finish him off'....In these areas, the written story of Mahabharata blends nicely with the life-practices of the people. Though the incident of Keechaka's death may not be true, it has taken firm root in people's belief. The belief is true. What then is the sort of truth an imaginative writer should be after? Don't we all feel instinctively that we should destroy anyone who violates the chastity or modesty of one's wife? Do not even the Western males feel this way? This timeless, universal male instinct or male pride, leading to male dominance, can it not be a literary truth?

"What is the real meaning of the term Aksohini? We get nowhere a precise answer to this question... Hence refusing to be dragged into a futile debate over undecidable matter, I merely computed the size of the armies involved in Mahabharata.War by looking at the size of the war-area. It was clearly a size hitherto unknown to the Aryan people... Why did all the rulers of Aryavarta participate in this war? The traditional Mahabharata. calls this a Dharma Yuddha, the War of Righteousness. Yet the righteous Pandavas commanded the support of far fewer rulers than the "unrighteous" kauravas. The majority of the rulers could have opted out, regarding the war as none of their business. But the Aryan kings were addicted to gambling, warring and womanizing. That is why they would rush to a svayamvara. They were made of such stuff. These were the sort of ideas and thoughts that drifted into my head while I was going through the roads of Kurukshetra in a rickshaw in the company of Dr. Phadke. It was then I made the mental note that the war reflected the nature of the Aryan people as well as that of the people affected by their way of life... On the day I started writing this novel, 12 October 1975, I barely managed to finish a page. The second day was slightly better with a tally of three pages. It was only after ten pages or so that I got into the swing of it, my pace accelerating and my absorption total. In creating literary works, it is a mistake to draw a distinction between the directly experienced and the indirectly perceived. After all, whatever I write is directly experienced by me. Maybe a detail here or there, a word here or there, may not appear to be experienced. But the basic material comes only as a result of intense subjective pressure. In so far as this material is concerned, there is no historical disjunction between this time here and that time there, the subjective time and the objective time... I was aware all along that I was not giving exact copies of the characters of the original Mahabharata. but only the different facets and forms of human nature and human relationships. Whenever I innovated a new character or a new situation, I could see the dimension of this novelty...

"The novel that was gestating within me emerged out of me eventually as something different from what had been conceived from time to time. This applies both to its form and meaning... The experience of writing Parva gave me a new sense of things, a new feeling about everything, a new birth as it were. Practice and habit are the grounds of most of our beliefs. When we abandon them in order to view life from the perspective of its terminal point of death, we reach out to a new awareness of human potentialities and actualities, and gain a new vision, a new illumination... How old am I now? How many more years have I yet to go? Is there any meaning I can scoop out of the years remaining for me here on earth? These questions and reflections on them have served as a drone of three notes to the music of this novel and they have sounded deep down I my mind and heart." 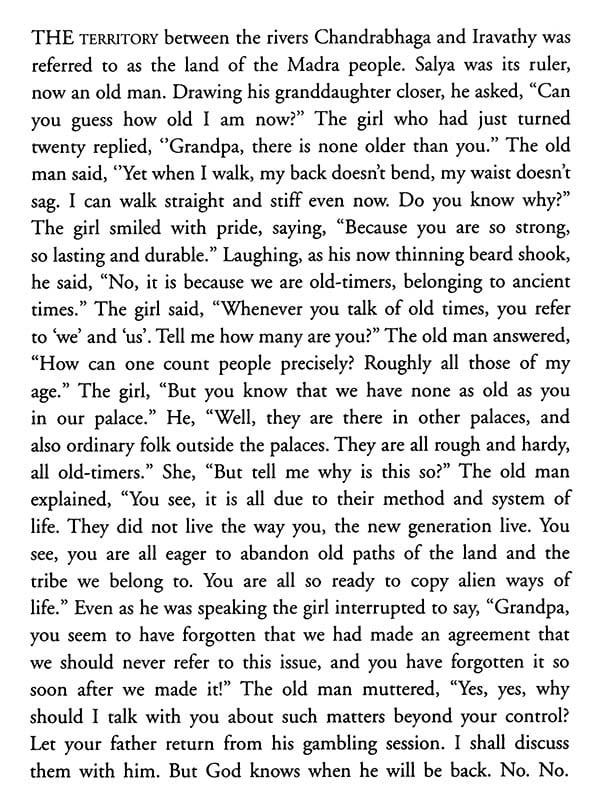 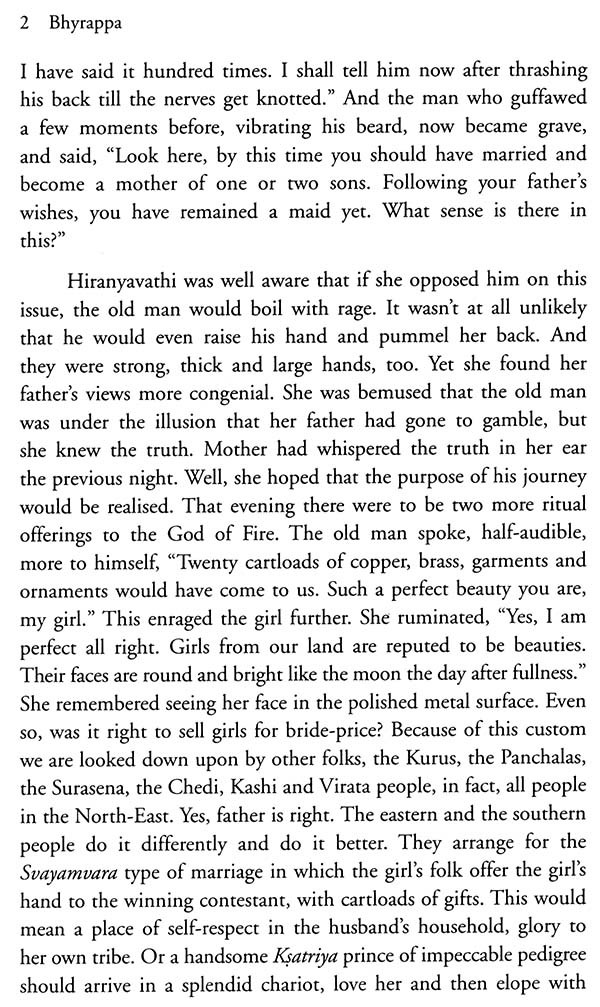 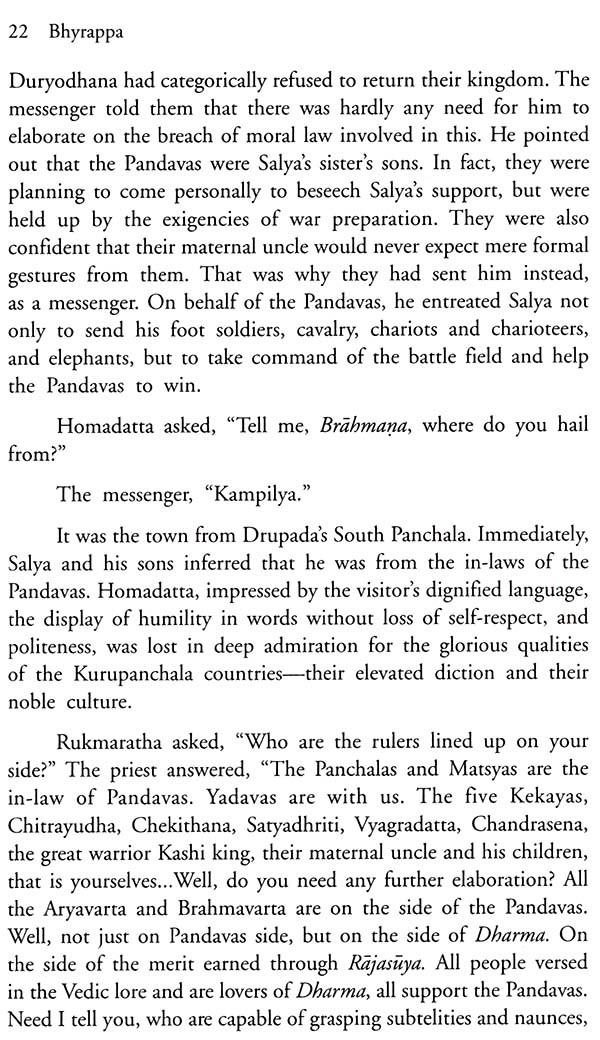 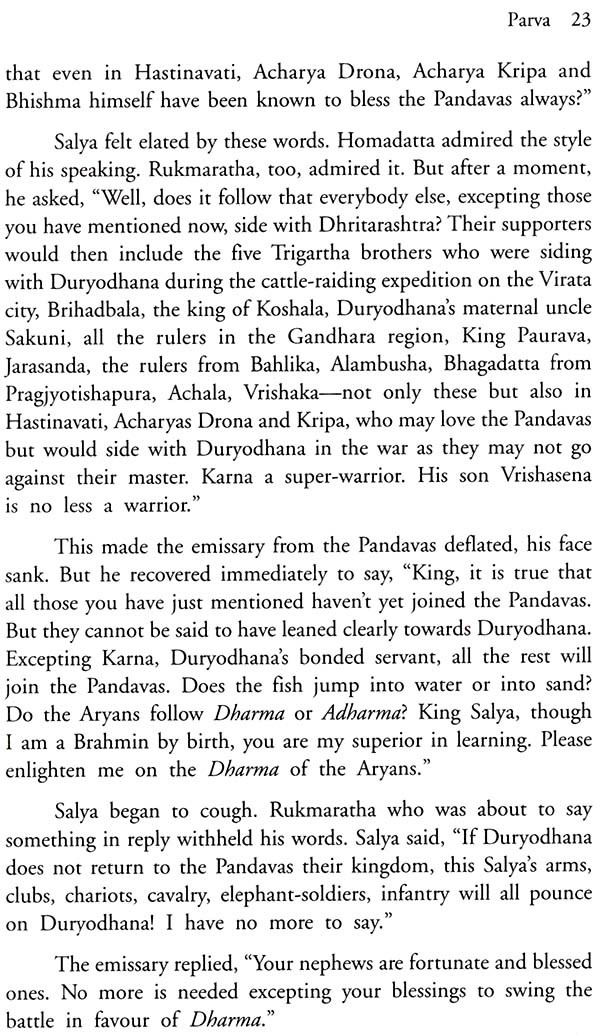 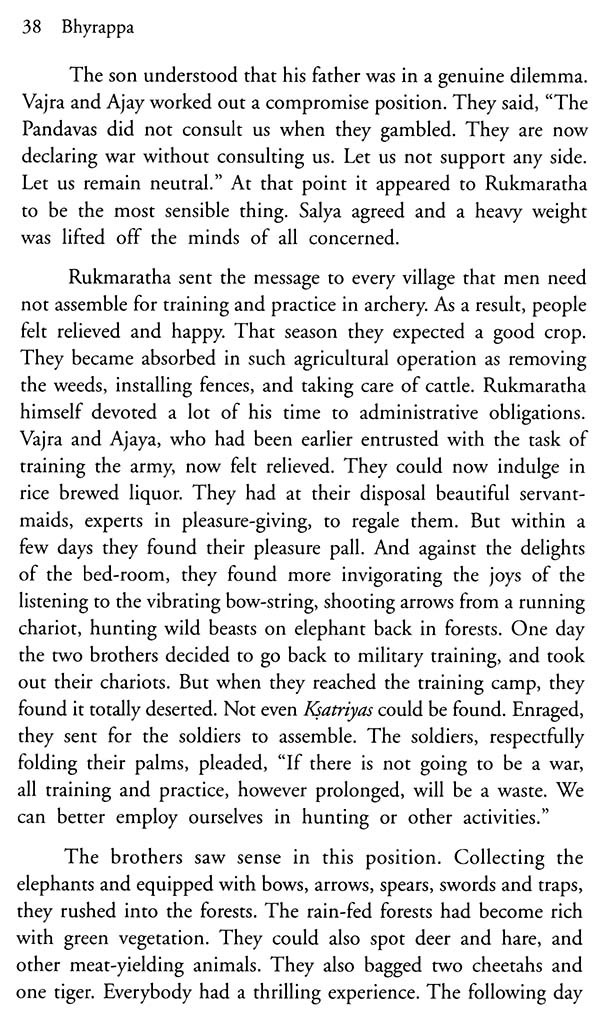 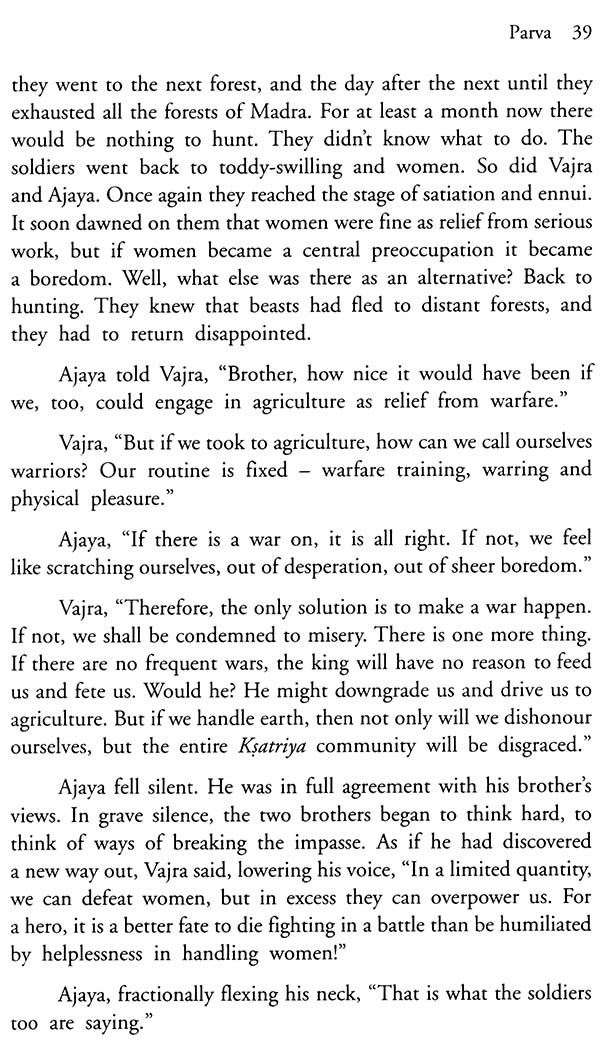 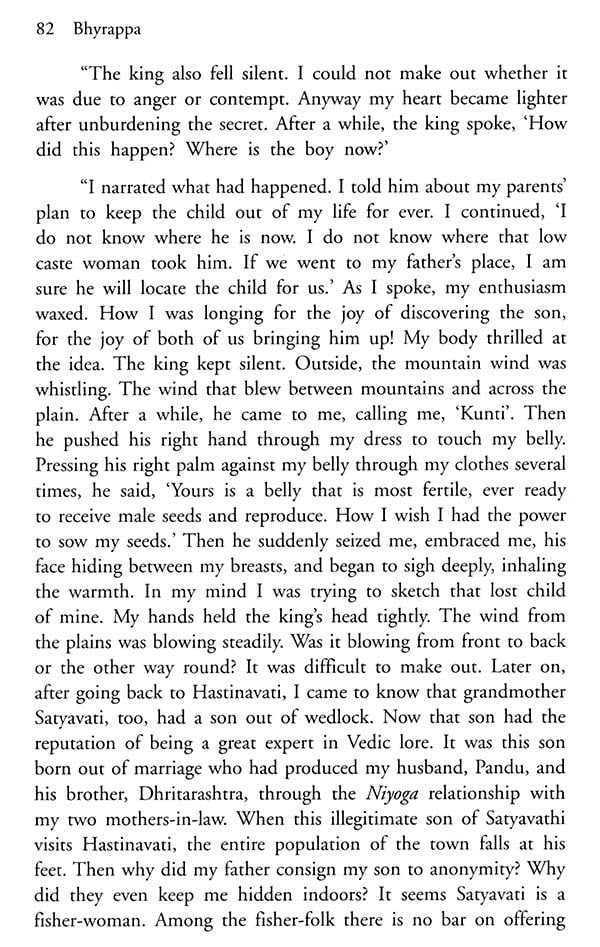 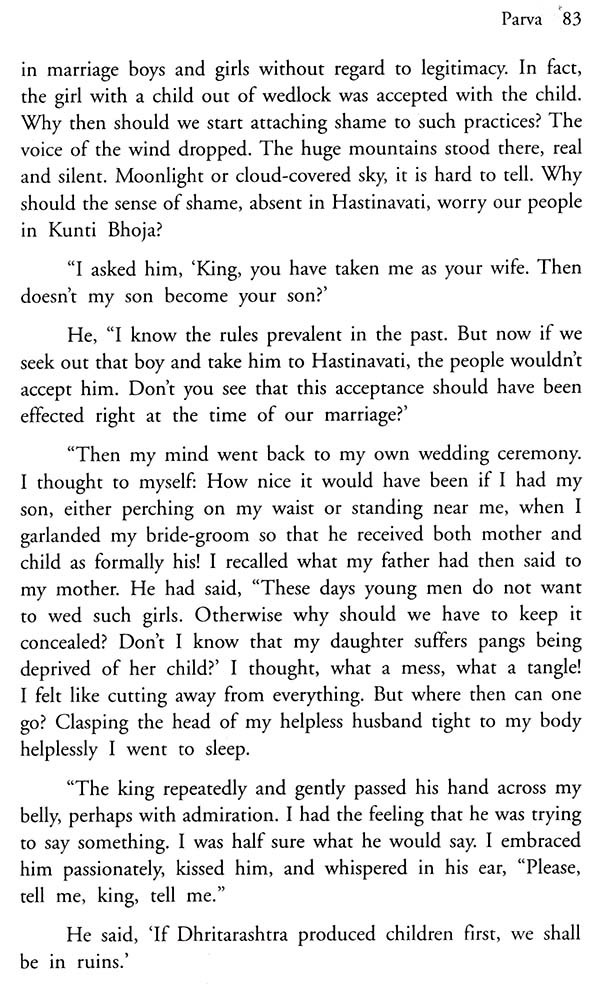 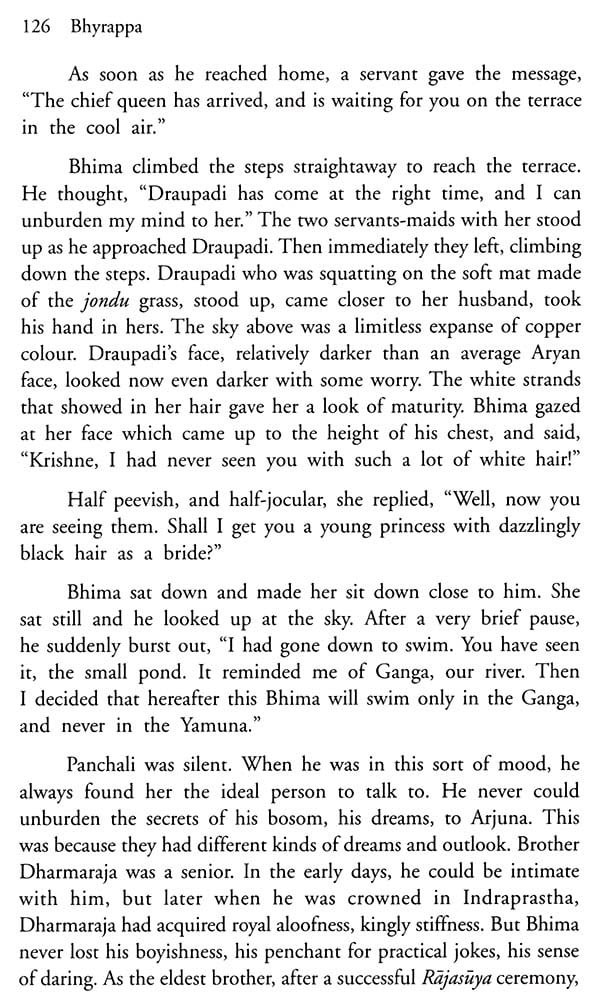 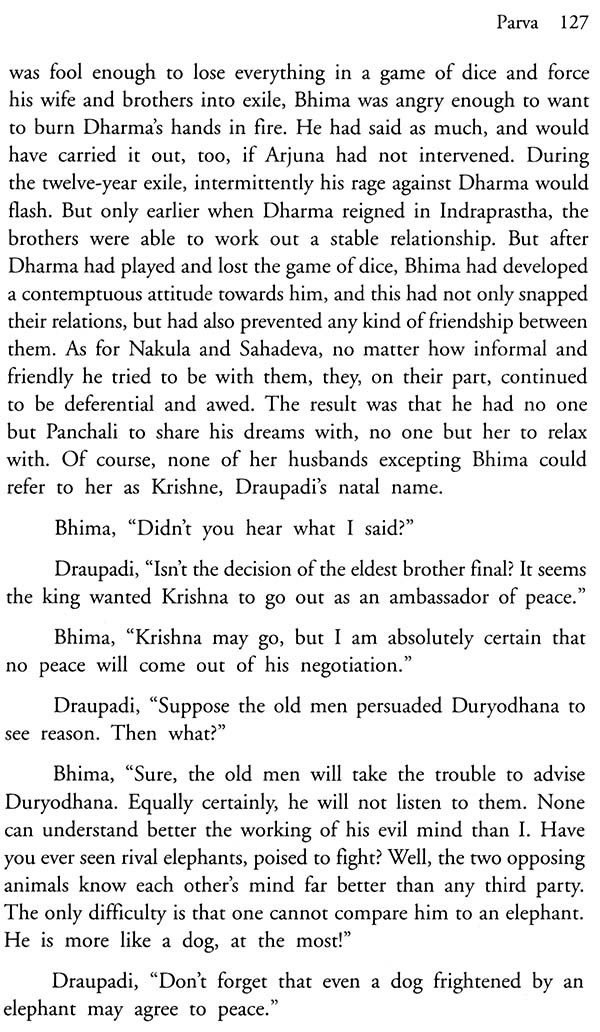 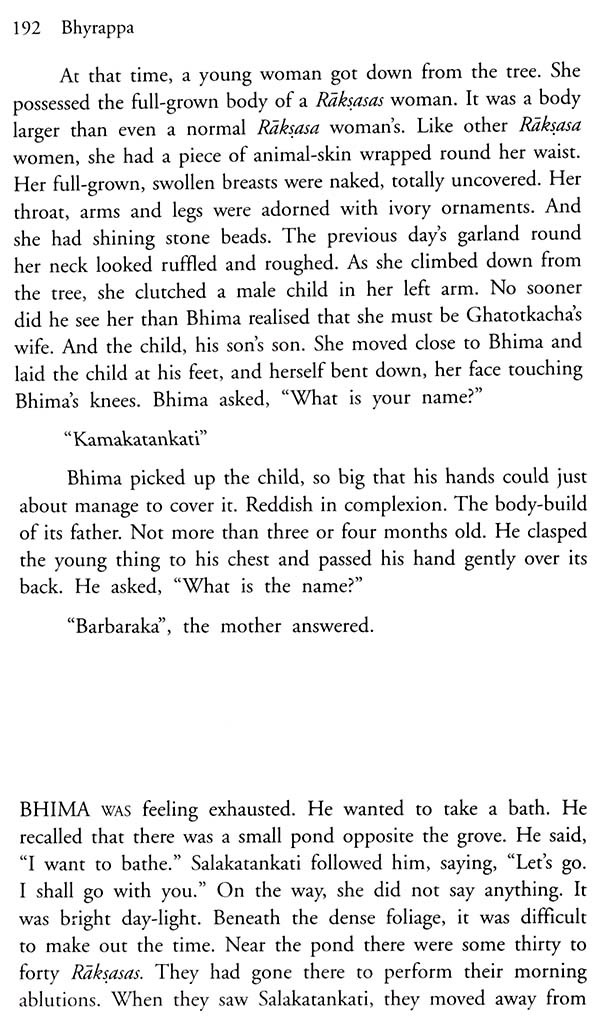 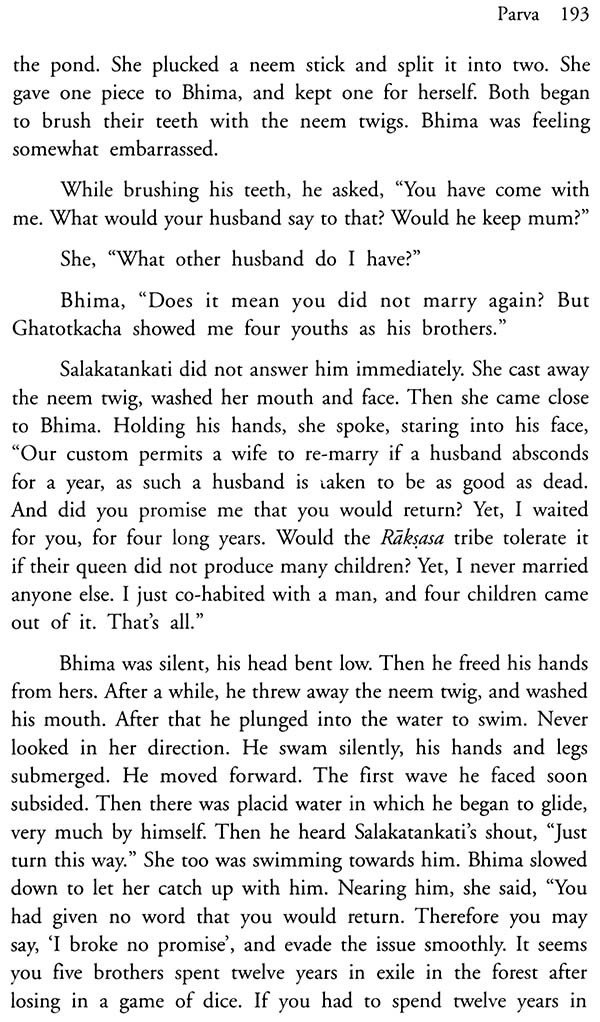 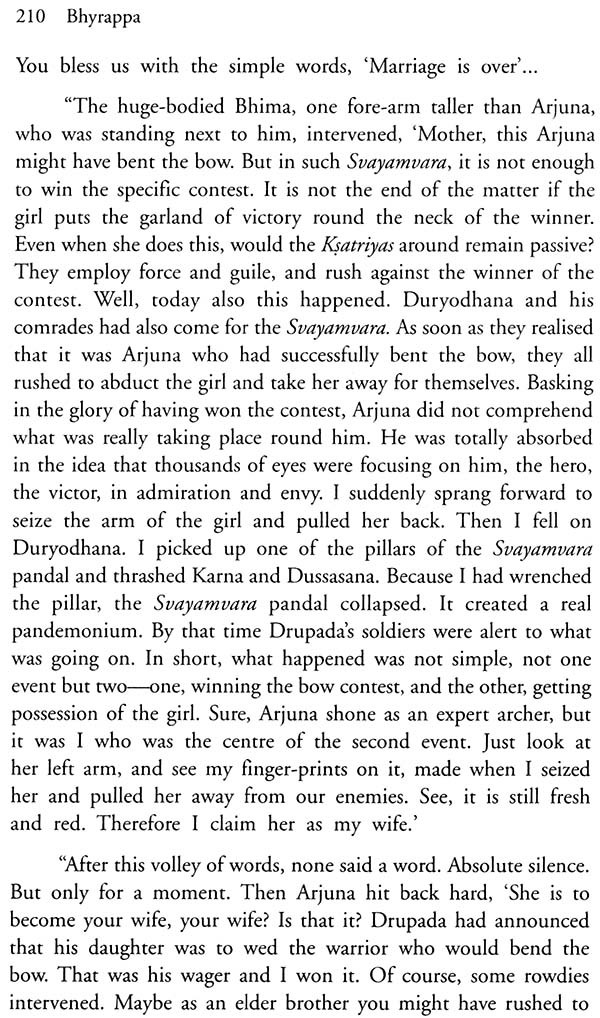 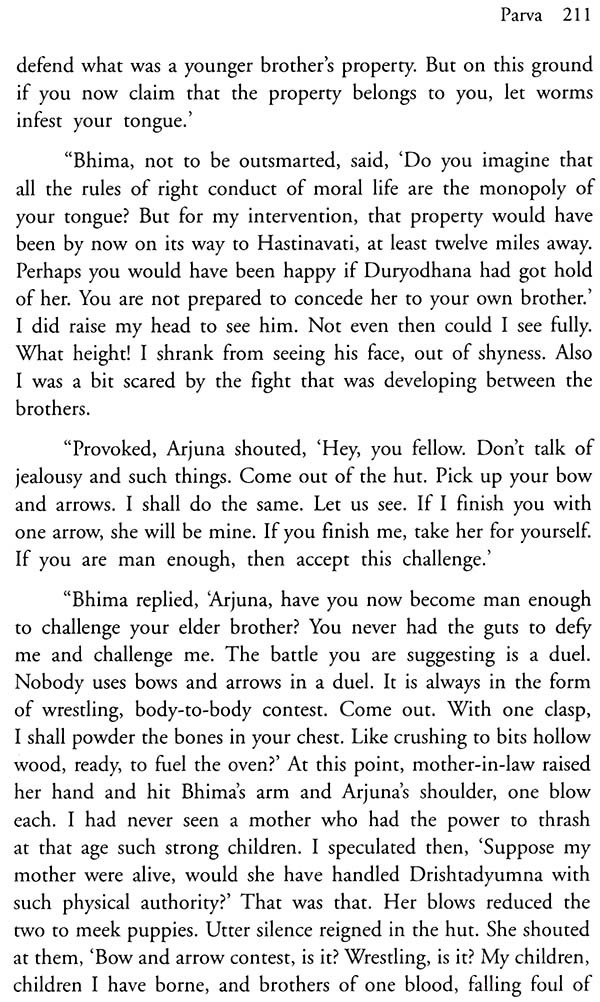 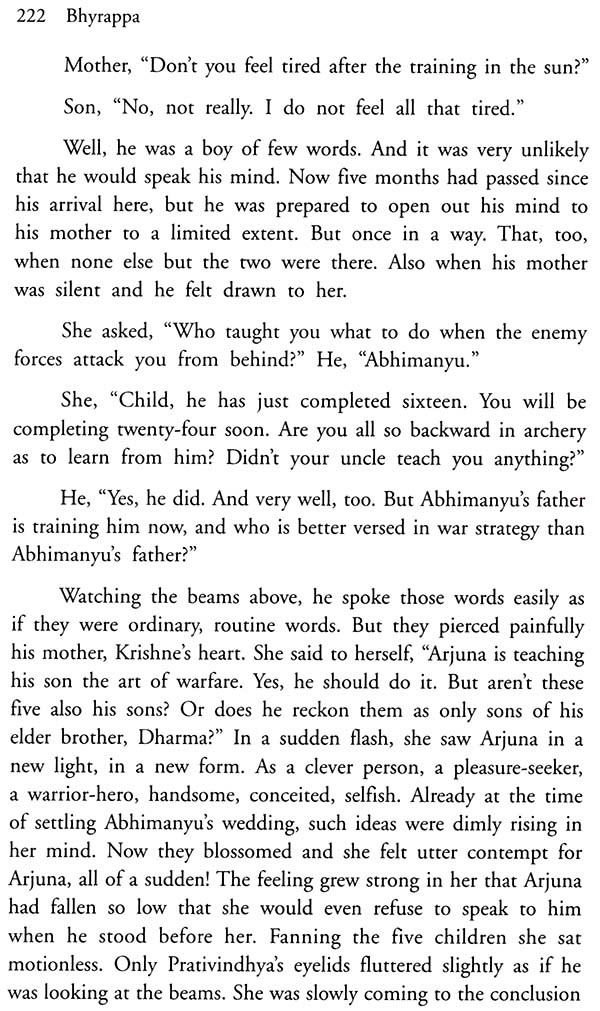 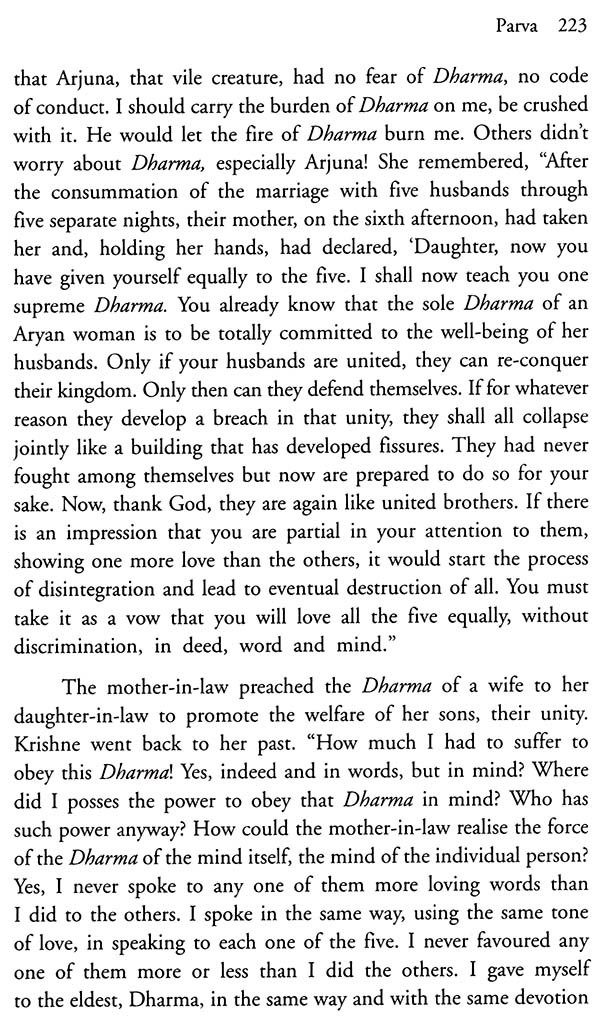