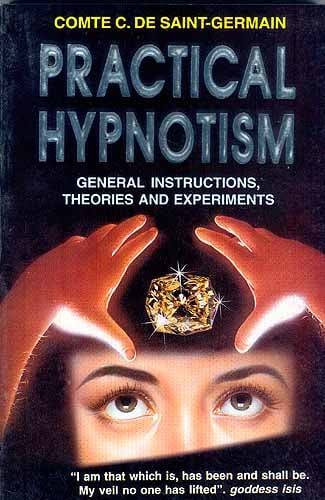 23 years in business
Back of the Book:

A complete History of Magnetism and Hypnotism up to the year One of the 20th century.
The most generally accepted theories concerning the cause and the symptoms of Hypnotic Sleep, in all its stages.
The various practical methods in use for producing this state and for awakening the subject when it is desirable to do so.
The theory and practice of 'suggestion,' both during and after hypnotic sleep.
A certain number of applications of Hypnotism to the cure or relief of certain ailments.
A number of experiments that belong really more to the domain of innocent recreation than to the realm of science; in a work, the amusing side of hypnotism.

Mankind's inborn love for the marvelous, for what is often called, even in our scoffing times, the "miraculous," seems to have met with no material decrease since the days of the ancient magicians. Modern science, while extending the boundaries of precise knowledge, has only whetted our appetite for further revelations. But we have learned, by the reading of the later philosophers' books and the teachings of our leading college professors, to accept only with a large grain of scepticism, statements of unusual, super-natural happenings. It is becoming harder and harder to convince us that every irregular fact can not be explained by the working of some regular law of nature, yet undiscovered in its entirety. Hence the intensity of our researches and the systematic ardor of our curiosity. In no field perhaps has this questioning of new phenomena taken place with more earnest persistency and tireless enthusiasm than in the domain of HYPNOTISM and MAGNETISM-two words that have gradually come to mean but one physical state, the symptoms of which are being scrutinized, all over the civilized world, with an insistent acuity worthy of the great doctrine at stake: the dominating influence of mind over body.

In this work, which unfolds the history of the recent developments of that curious branch of psycho-physiology, we have attempted to gather clear, positive statements from men whose names stand as synonyms of deep scientific acumen and unimpeachable honesty. We have grouped their discoveries according to chronological order and have not allowed our private opinions to dim the brilliancy of their teachings. And yet we have not hesitated to take sides whenever necessity compelled us to, as our earnest desire is to leave in the readers' minds, not a hazy jumble of ill-digested doctrines and experiments, but a continuous exposition of the whole question as it now stands before the world, thus placing in their hands a theoretcal and practical guide of immediate and undoubted value.

A few words will explain our purpose more fully and, at the same time serve as an epitome of the whole subject.

We will take as an example a commonplace individual whom we suspect to be amenable to what may be called for the present "hypnotic influence."
His first condition will be the "perfectly awake state."
He may gradually drop into "a slight drowse."
This may develop to the "somnambulistic stage."
As the sleep grows deeper, he reaches "the cataleptic state."
Finally he attains the extreme limit of anasthesia, or insensibility called "lethargy."
This gives us the full gamut of the successive periods comprised within the generic appellation of "Hypnotic Sleep" or "Hypnosis."

But this is not all. It has been discovered that a certain percentage of the subjects who may thus be induced into the Hypnotic sleep are accessible to "suggestion;" i.e., the person who has placed them in that state may attain over their modified, or annihilated, will-power, an overpowering mastery, and can make them act (some people say ''think'') in any way he pleases as long as the hypnotic state lasts.

More still. The hypnotizer may cause his will-power to govern the subject even after the latter has awakened, by issuing certain orders, "during" the hypnotic.sleep, to be obeyed "after" the sleep is over, and when, in every other respect, the subject appears to have recovered the full possession of his individuality; this phenomenon, which constitutes, in our opinion, the most sensational and the most dangerous of all hypnotic manifestations, is called "post-hypnotic suggestion." On its operation or rather its possibilities has been based the bold and shameless assertion of so-called Teachers of Hypnotism, that they will place into the possession of whomsoever pays them their fee, the power to influence other people's minds for their own profit and as their fancy may decide. We are glad to say that, within this volume, evidence will be produced that will shatter to a great extent these unholy promises and establish the fact that "suggestion" and especially "post- hypnotic suggestion" can but very seldom be successfully employed for evil purposes, and that, even in cases when they have been made use of, it is easy for another hypnotizer to expose the wickedness of the first operator by simply re-placing the subject in the hypnotic state and questioning him concerning the happenings of the preceding spell induced by the former "doctor." Thus the foolish or criminal "suggestor"-if we may coin this term-would be destroyed by the recoil of his own weapon. As stated above, this grave aspect of the question is treated exhaustively within these pages.

The usefulness of hypnosis in the cure, or more frequently, the momentary relief, of many physical ailments is now an almost universally accepted doctrine. We shall give the reader the full benefit of the facts concerning this precious discovery, destined, within a few years, to replace ether, chloroform, cocaine and other anesthetic drugs, for the annihilation of sensibility during the performance of surgical or dental operations. The importance of this improvement may be better understood when one knows that the use of these drugs is invariably fatal whenever the heart of the patient is the least affected, and such a state often exists without the knowledge of physician and client. On the other hand, no danger ever results from insensibilization due to hypnotic sleep, while the absence of pain is just as complete if not more so.

Of course this work being prepared for perusal by the general public and the students-not the learned professions-does not aim to teach all the features of this great problem, yet but imperfectly solved; nor to discuss every minor doctrine that has grafted itself upon the initial discovery. But it will furnish the reader with

1, A complete history of Magnetism and Hypnotism up to the year One of the 20th century.
2, The most generally accepted theories concerning the cause and the symptoms of Hypnotic Sleep, in all its stages.
3, The various practical methods in use for producing this state and for awakening the subject when it is desirable to do so.
4, The theory and practice of "Suggestion," both during and after hypnotic sleep.
5, A certain number of applications of Hypnotism to the cure or relief of certain ailments.
6, A number of experimbrents that belong really more to the domain of innocent recreation than to the realm of science; in a word, the amusing side of hypnotism.

As a rule, we have made it a point not to quote any of the above authors, but to interweave their statements into one homogenous narrative, the merit of which remains their own, not individually, but as a body of distinguished, often illustrious, and always strictly honest searchers after Truth. This constitutes the originality-and we hope, the value-of this compilation. 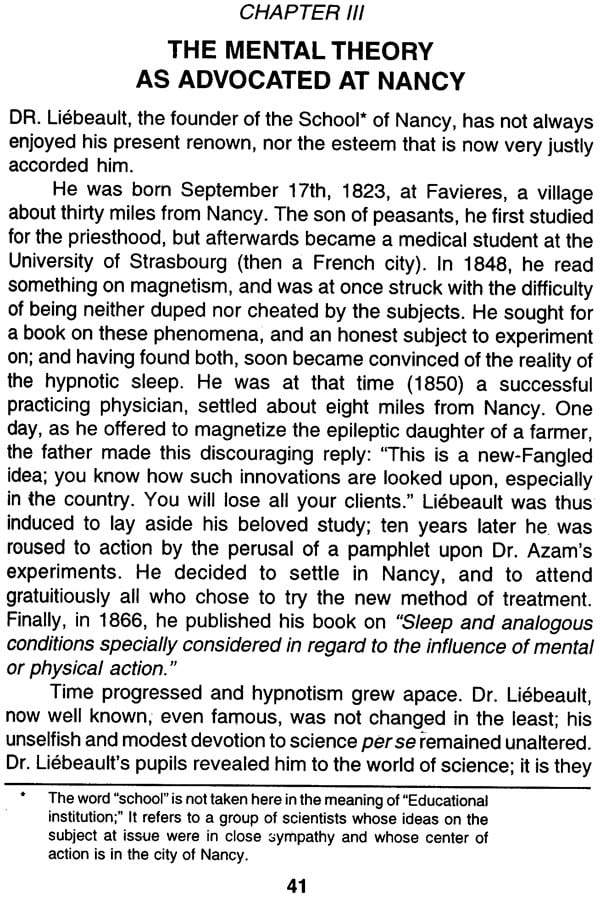 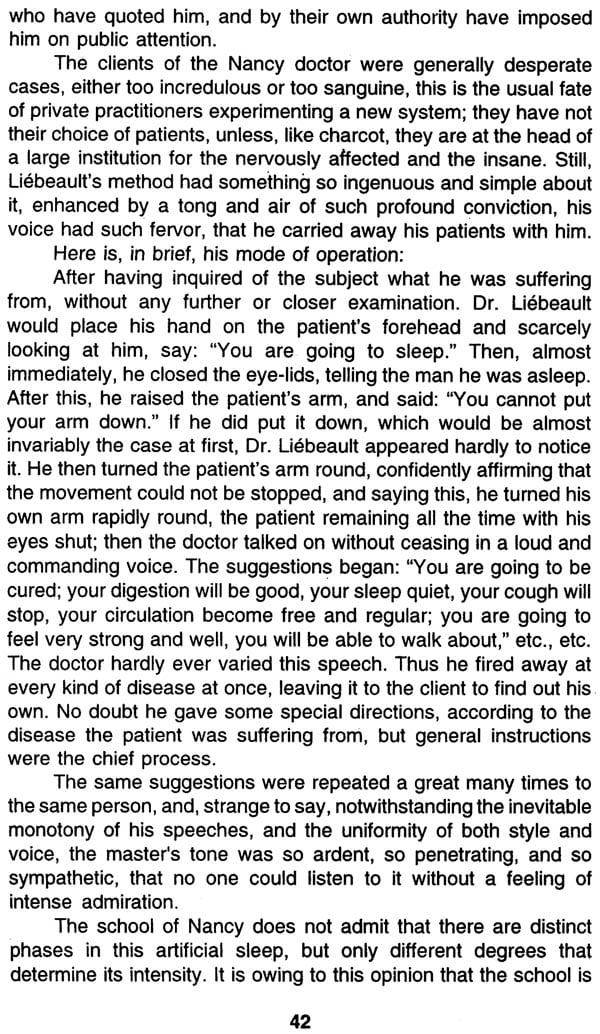 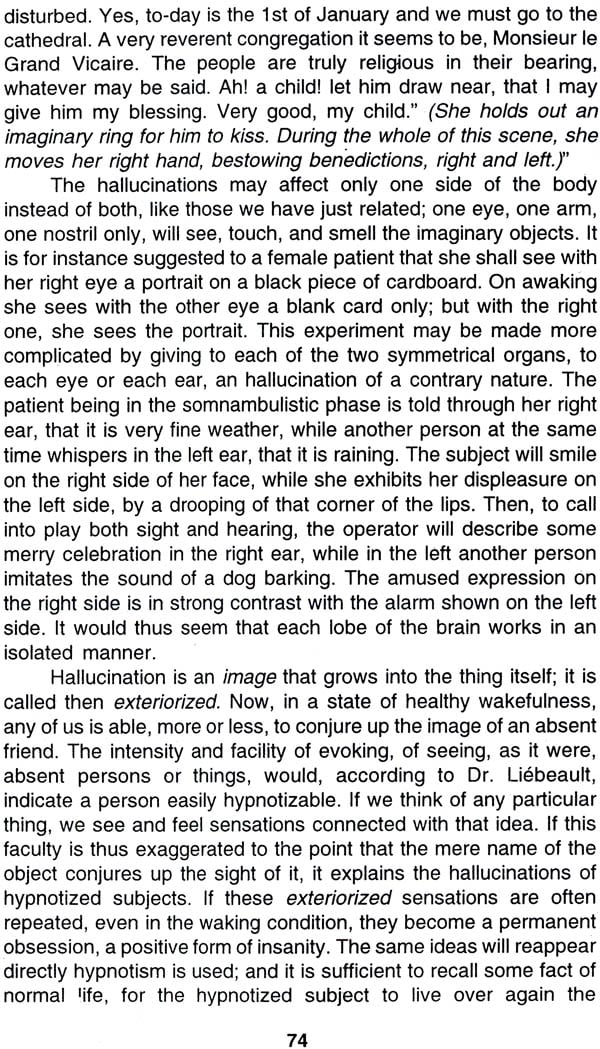 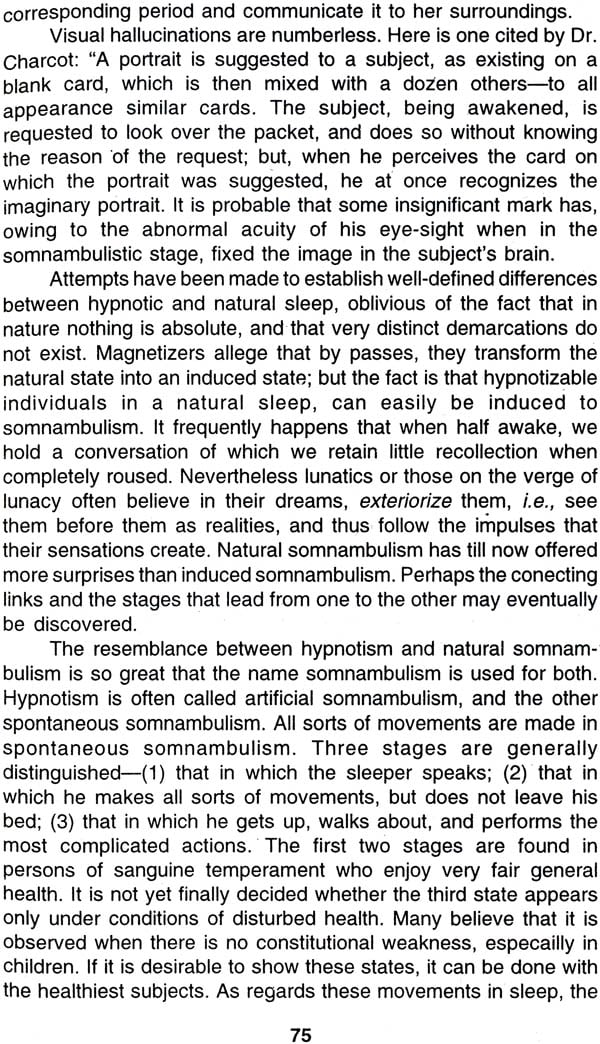 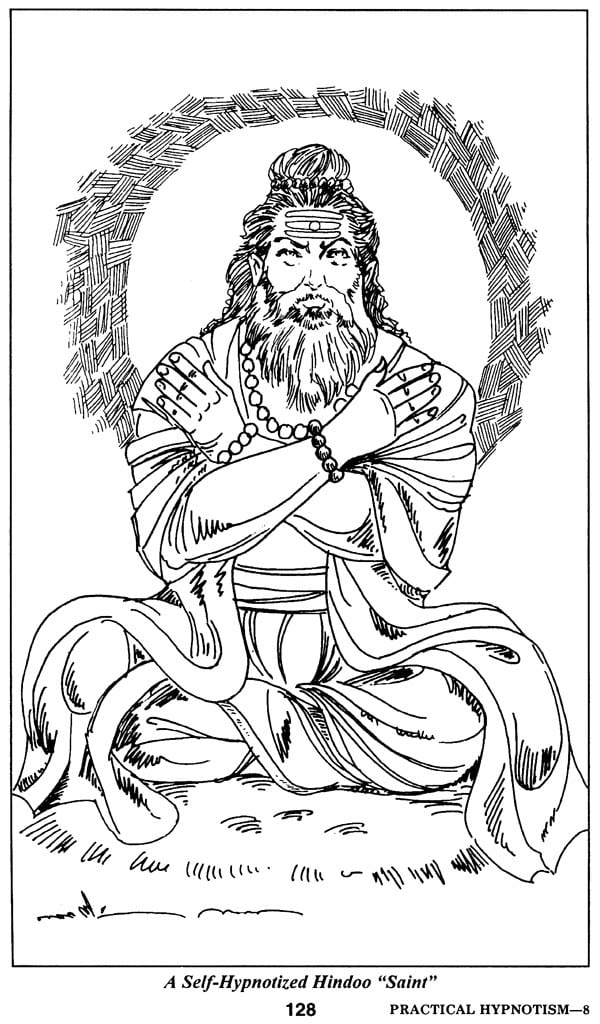 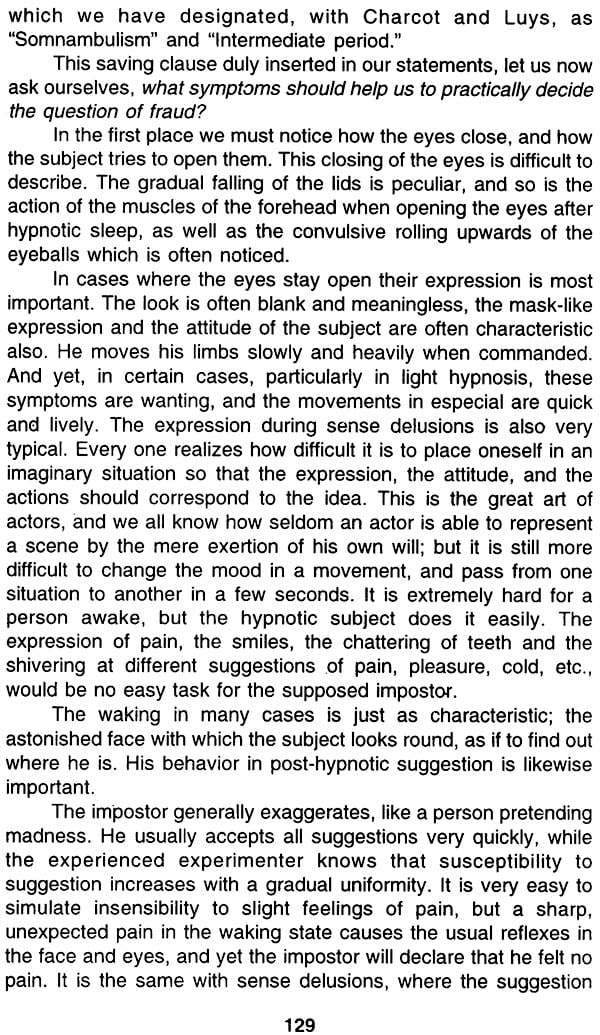 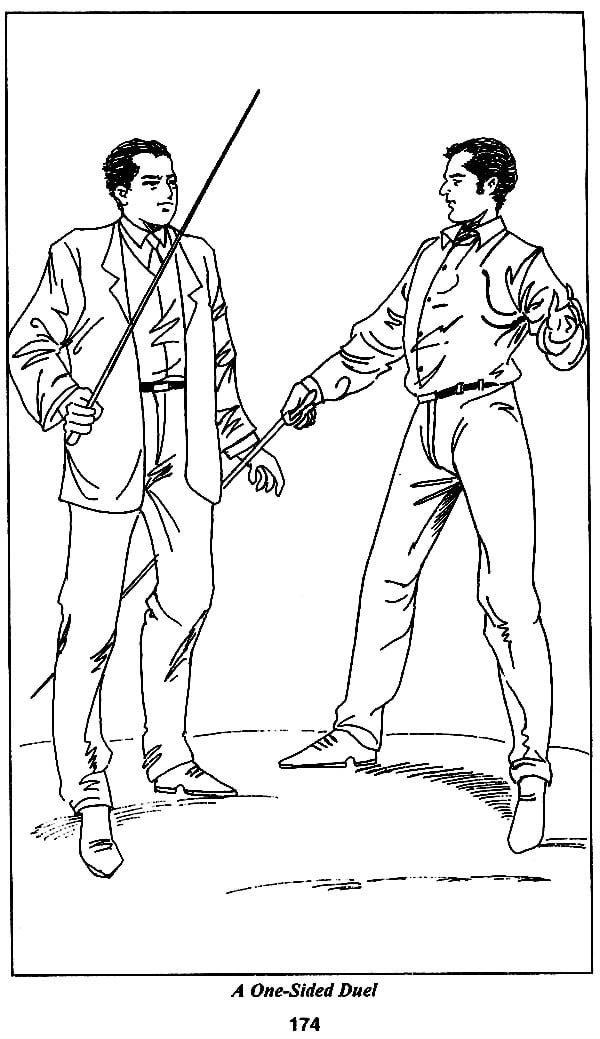 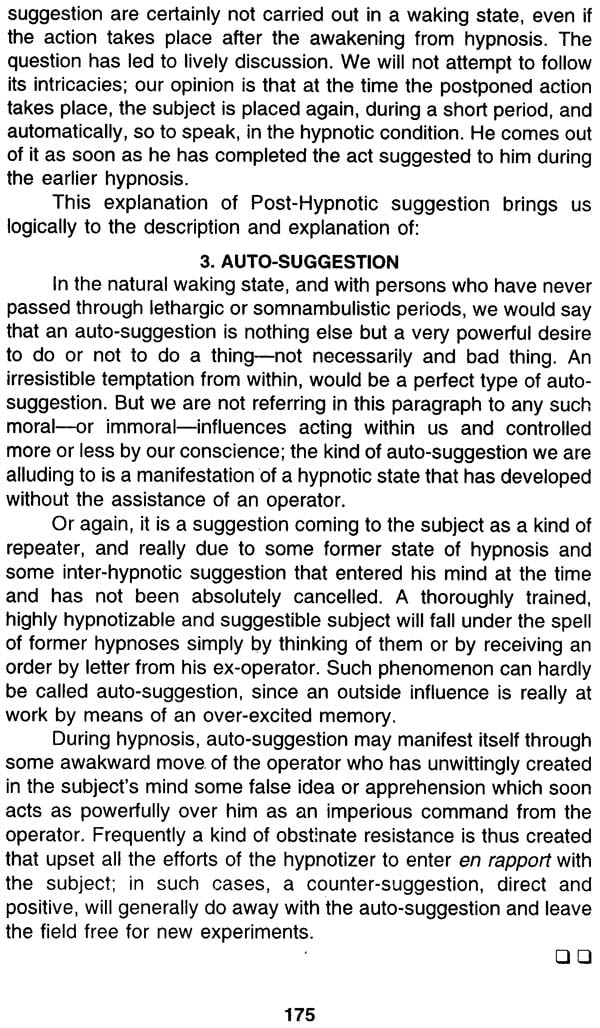