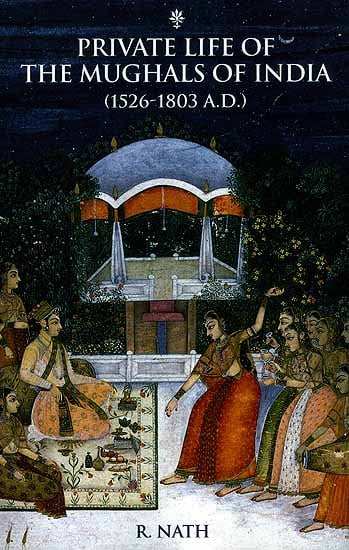 23 years in business
Back Of The Book

Titled as it is, the book deals with the little known, but much scandalized, private life of the Mughals who ruled from 1526, practically to 1803 when the British captured Delhi and Agra, their nerve-centres, from them. This included the period of the reign of three great Mughals, viz. Akbar (1556-1605), Jehangir (1505-27) and Shah Jehan (1628-58), of little more than a century. They possessed not only fabulous wealth, but also the vision to found a culture-state, in the real sense of the term. Planting it in the soil as naturally as a banyan tree, they institutionalized their life, as much as their government. The former, almost completely shrouded in mystery, offers one of the most interesting aspects of medieval Indian history and culture.

Unfortunately, the official record of their day to day living which was scrupulously maintained has been lost to us.

It has been generally believed that the contemporary Persian chroniclers, living under the court patronage as they did, have blacked out this aspect of their history. Consequently, the modern historians, who have ventured to write on this subject, i. e. Mughal harem life, have almost entirely depended and drew on accounts of foreign travellers. These European travellers visited the Mughal empire contemporarily and some of them were received by the Great Mughals. But they had limitations of language, culture and accessibility to correct information. They viewed the things from the point of view of European civilization and were easily tempted to misinterpret, exaggerate and scandalize. Their narratives on Mughal life have, this, come up to be a strange mixture of a tiny fact with a mountain of fiction. Our historians who, unfortunately relied on their travelogues, have also erred in a large measure and have tremendously contributed to the misunderstanding and misrepresentation of the Mughal lifestyle. It has been unduly romanticized.

Truly, the Persian chroniclers were either prevented from knowing what happened within the four walls of the Mughal harem owing to strict protocol and Purdah, or even when they had access to this knowledge, they did not have the courage to write on this sensitive subject. The Mughal life, consequently, remained a closely guarded secret.

However, the human nature being what it is, these contemporary intellectuals' sense of wonder led them to leave clever references to their private life in a word or two, casually, in historical narratives, and one has just to read between the lines. A lifetime's rapport with these sources is needed to unravel these mysteries and, towards the end of it, one is simply amazed to see that there is probably nothing which was not known and which has not been recorded.

Thus, for example, when the historian Badaoni stated, on the eve of Akbar's marriage with the princess of Jaisalmer, that she 'obtained eternal glory by entering the female apartments', he artfully recorded that the Mughals did not practice divorce, or separation even by death, and they married for 'eternity', which is how the institution of Sohagpura (The House of Eternal matrimony) came into being. One has just to live up with them to be able to write an authentic history on this abstract subject.

Thus does it cover such aspects of their living as food and drinks; clothes and ornaments; perfumes and incenses; addictions and intoxicants; amusement and pastimes; floor-coverings, furniture and lighting; and, of course, their sex life to which a few chapter have been devoted. How the Mughal king managed to keep a few hundred young and beautiful women attached to his bed is as enlightening a study as it is interesting.

Though based on research, it is written without its jargon, is a simple, readable form, for the general reader.

The opulent, sometimes scandalous, private lives of the Mughals of India is brought to life in this book. The text covers various aspects of their lifestyles, such as their food and drinks; clothes and ornaments; perfumes and incense; addictions and intoxicants; amusements and pastimes; rituals of circumcision; marriage and harem life. This well-written book with colour illustrations and photographs will be a delight to the lay reader as well as the serious scholar.

Professor R. Nath has worked at more than fifty ancient and medieval sites of India and with his extensive knowledge of Sanskrit and Persian, has authored several books, research papers and articles. He currently lives and works in Agra.