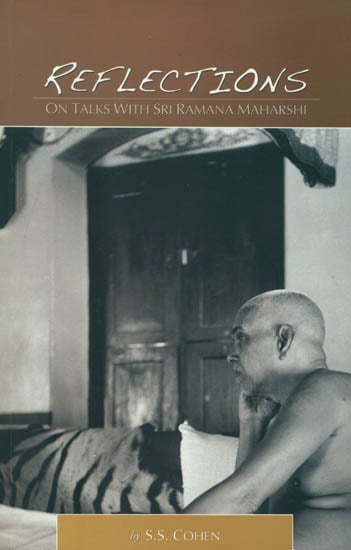 S.S. Cohen sat before the Master at the time ‘ Talks with Sri Ramana Maharshi’ was recorded. He listened intently to the teachings he heard and dedicated his life to their fulfillment, under the guidance of his guru.

In ‘Reflections on Talks with Sri Ramana Maharshi’, S.S. Cohen has plucked out the gems form this compendious volume that comprehensively represent the salient teachings of the Master and classified them in separate chapter under subjects most pertinent to the earnest seeker of Truth.

The notes that follow the text are full of insights and practical guidance to the sincere aspirant who wishes to tread the path taught and lived by Sri Ramana Maharshi.

To write a commentary on Sri Ramana Bhagavan’s words, which are deemed to be lucidity itself, may seem to be a superfluous labour; yet there are thousands of studious seekers who have not had the privilege of hearing the teaching direct from the Master’s lips, who would feel benefited and, indeed, happy to receive an exposition of it from those who have. For the sake of these I have culled from the compendious work, now the well-reputed Talks with Sri Ramana Maharshi, such gems and in such numbers as in my humble opinion can fairly and comprehensively represent the teaching, adding my own reflections, as “Notes”, to each quotation which I have named “Text”, to indicate its origin. I have, moreover, sifted and classified them in separate chapters so as to facilitate the study of each individual subject.

I deem it essential to give here a brief biography of the book in question. It is named “Talks” from being a record in the form of a diary of some of the conversations which the visitors and disciples have had with the Master on Spiritual matters for almost exactly four years — April 1935 to May 1939. In those years it used to be called “The Journal”. For roughly half of this period it was written in the Darshan Hall itself by the diarist, or recorder, Sri M. Venkataramiah, the late Swami Ramananda Saraswati, at the end of each particular conversation at which he was present. Sri Bhagavan scarcely ever answered in English, but invariably in Tamil, which very often the diarist himself translated into English to the questioner within the hearing of the whole audience. But questions in Telugu and Malayalam, Bhagavan answered in the same languages, and the answers in the latter language may be said to have been lost to the diarist, who did not understand Malayalam.

Therefore the language of this diary is of the recorder, more often it is a paraphrase of the Master’s answers, occasionally His very words, rendered into English, for it was impossible to write down afterwards all He had said, or to keep pace with Him even if the answers were to be taken down verbatim on the spot. What we want is the Truth as expounded by Bhagavan, and this Truth is all here, which is all that matters.

As for the teaching of Sri Bhagavan, it has by now acquired a worldwide recognition, and has attracted earnest seekers from all the five Continents, as much for its fresh simplicity as for its sturdy rationality, which appeal both to the head and the heart. It can, however, be summed up in the ancient dictum “Know thyself”, or “Seek the seeker”, which the Master dins in one form or another in practically every answer he gives. Find out the questioner, he insists, and you will know the truth, which will solve all your problems and remove all your doubts.

Peace, by whatever name and in whatever guise it goes — happiness, knowledge, liberation, truth, etc. — is the conscious and unconscious aim and object of all human endeavour; for, the Master tells us, it is the very nature of our being, our very Self, so that self-seeking in the last analysis turns out to be a quest for Peace, from which there is no escape. There is no feeling, no thought, no action which does not stand on the foundation of Self. Self- preservation, or self-love is the dominant instinct in all life. When the Lord God commanded the Children of Israel in the wilderness to love their neighbour as themselves (Leviticus, XIX, 18), He meant that the maximum good that one man can do to another is to love him as much as he loves himself, self-love being the strongest of all passions, and the substratum of all emotions. We have no doubt heard of the self-immolation of many a mother for her child in cases of extreme danger, and of a patriot for his country, but the gratification derived from this immolation is to the Self. My child, my country, clearly denote the ‘I’, or Self, and what is immolated is only the body, and not the Self, which, being pure knowledge, pure spirit, can never be destroyed to be immolated.

We, therefore, seek the Self in everything, in every circumstance, and at every moment. It is self-love or self- seeking that induces us to desire, to work, to learn, to compete, to exert, to become politicians, administrators, scientists, black marketeers, gamblers, philanthropists, patriots, and finally yogis. It is self-love that makes us scour the skies, dig the earth and plumb the oceans. But alas, this self-seeking, being unintelligent, is sought outside the Self and thus succeeds only precariously, if at all. To seek the Self we have to go to the Self, not to the not-Self.

When people, therefore, group round the Master with bundles of problems, bundles of questions and grievances, he knows that they are seeking only the Self, and to the Self he turns them. “You are asking all these questions in the interest of your own self,” he virtually tells them, “all your efforts have so far been directed for the good of this self of tours; now try to find out whether this good has been a genuine good, and this self is your true Self. You have been seeking this good in the wrong direction, in wrong things and wrong places, because you have been mistaken about your own identity. What you have been taking for yourself not yourself at all. Your instinct of self-love has got mixed up with your sense-perceptions and brought you down to this strait. You fell victim to a hoax, from which to be saved you have taken the trouble to come to this Ashram with your load of worries and misery for luggage.

“Now what you should do is to learn what the Self is, and then directly seek it. Do not digress in irrelevant matters, in bodies, koshas, involution and evolution, birth and death, in super sensuous sights and sounds, etc., for all these are glamorous irrelevancies which trap and seduce you away from the reality of yourself and retain you in the delusion of the senses from which you are now attempting to escape. What is of importance is not what you perceive, think or do, but WHAT YOU ARE.” Sense-perceptions, conceptions, sensations, actions, are mere dreams, mere pictures in the consciousness that perceives them. They rise from it, like dreams from the dreamer, distract its attention for a while and disappear in it. They change incessantly, have a begin- fling and an end, but he, the thinker and knower, being pure intelligence, remains ever. The knower is thus indestructible. The light of knowledge comes only from him, the subject, never from the object, the body. What we therefore call our Self is not the body, which is born, grows and dies, which is made of innumerable non-homogeneous parts which do not think, do not seek, do not perceive and do not understand. We are the intelligent indivisible unit ‘I’ — life itself— which pervades and uses the body, which sees but cannot be seen, hears but cannot be heard, smells but cannot be smelled, knows but cannot be known: for it is always a subject, never an object. And because we cannot see hear or smell our ‘I’, we mistake it for the body which can be seen, heard and smelled. Thus the self-instinct, the ‘I’-sense, getting mixed up with the sense perceptions, loses itself in the world of sense-percepts, from which none can save it but the Supreme Guide, the divine Guru.

Thus the knower, or dreamer, is alone real; the known is sheer dream. This sums up the teachings of the Srutis, and conforms to the experience of Sri Ramana Bhagavan.

To follow up the Quest till the Self is realized, is the path of jnana, of Supreme Knowledge, of Liberation and Bliss everlasting – a path which has been viewed by the Master from every side and discussed in every detail. He has said everything that needs he said and revealed everything that needs be revealed. And whatever he has not said and revealed is scarcely work knowing.

This is, therefore, the spiritual Kamadhenu, which can satisfy the hunger of al Truth-seekers. The sadhaka, or yogi, who puts the teaching to the test will find in it ample material to guide him in his inner quest. What helps one sadhaka in his forward march may not help another; but every sadhaka will find in it the hints which will help him most to work out for himself the method of practice which suits him best and which is likely to lead him straight to the Goal. He who looks in it for long, detailed lecturers on the rules of meditation and Samadhi, as he is accustomed to do on the laws of physics and mathematics, will look in vain; fro we do not deal here with sensuous problems and equations which can be verified and resolved in the common world of liquids and solids, of durations and dimensions, but with the obstacles of the seeking mind itself to perceive its own native state – obstacles which none can remove but the very same mind through self-investigation and self-control, without the help of any sensuous medium or scientific instrument. 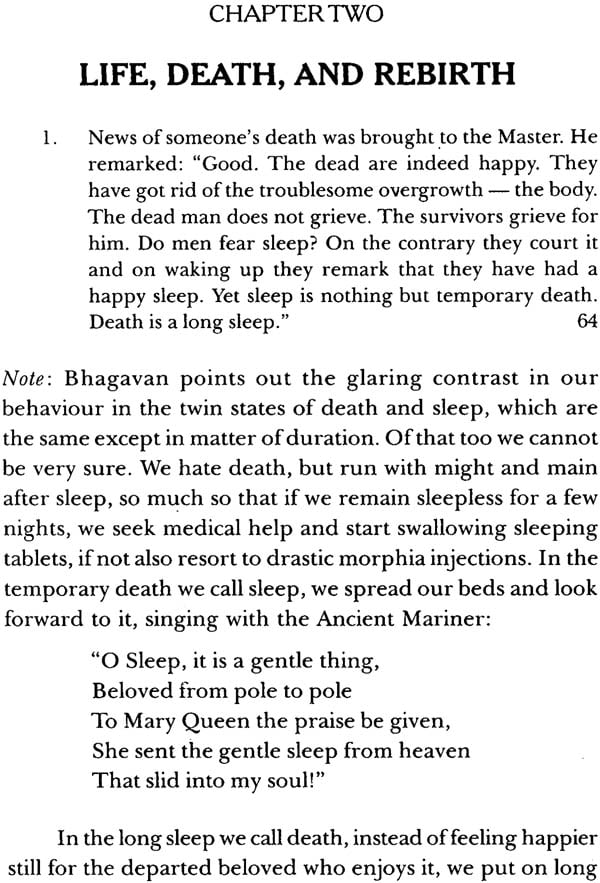 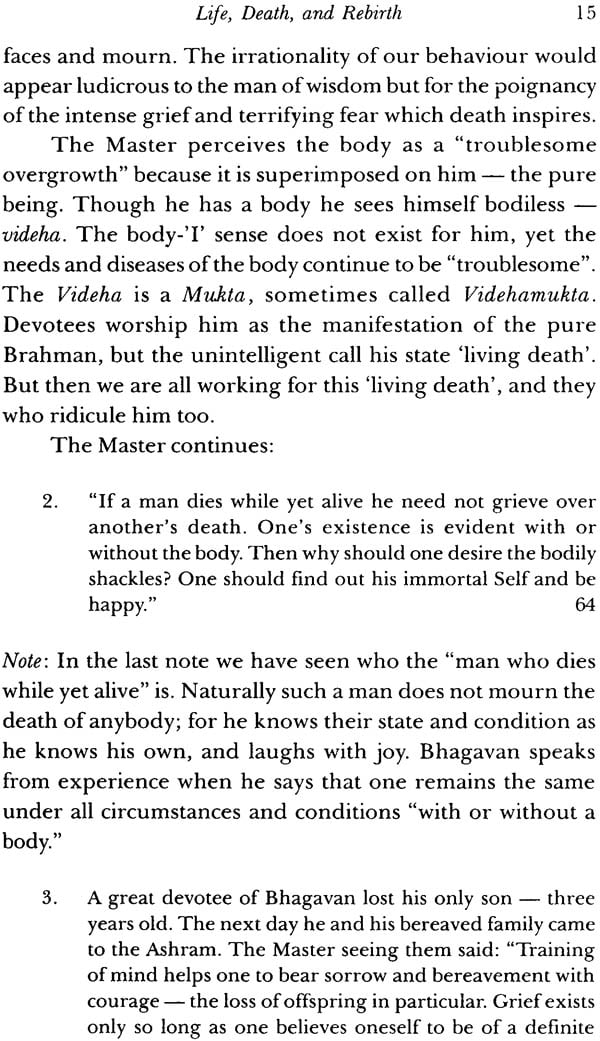 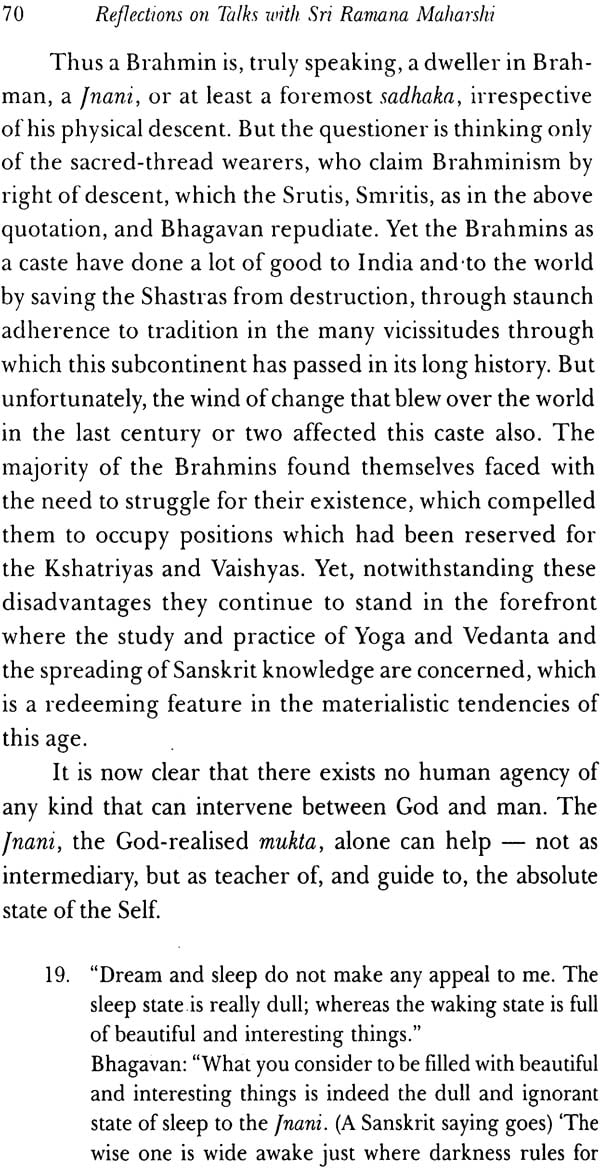 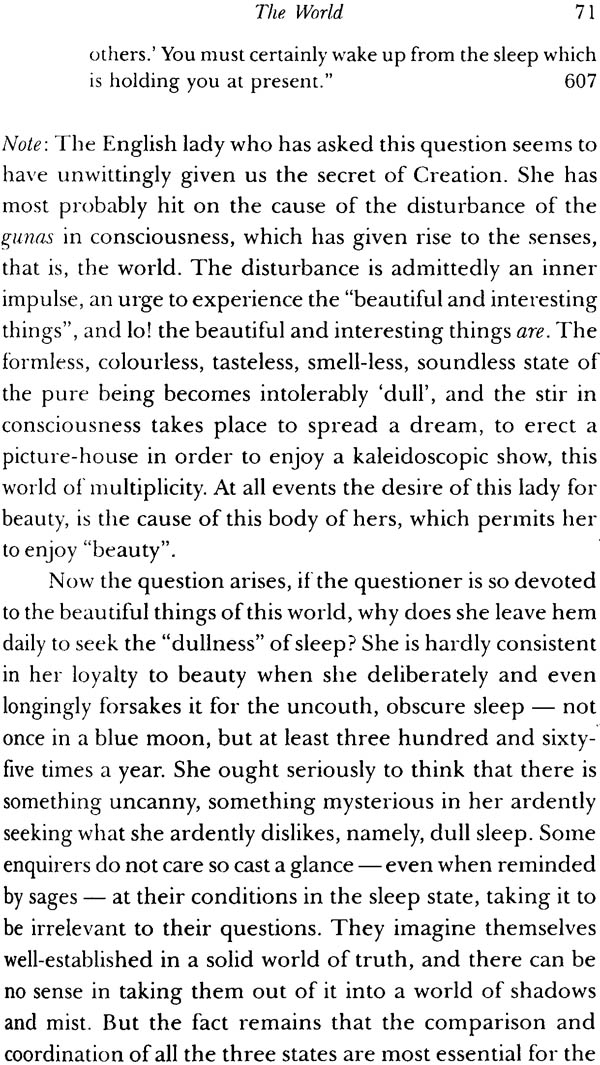 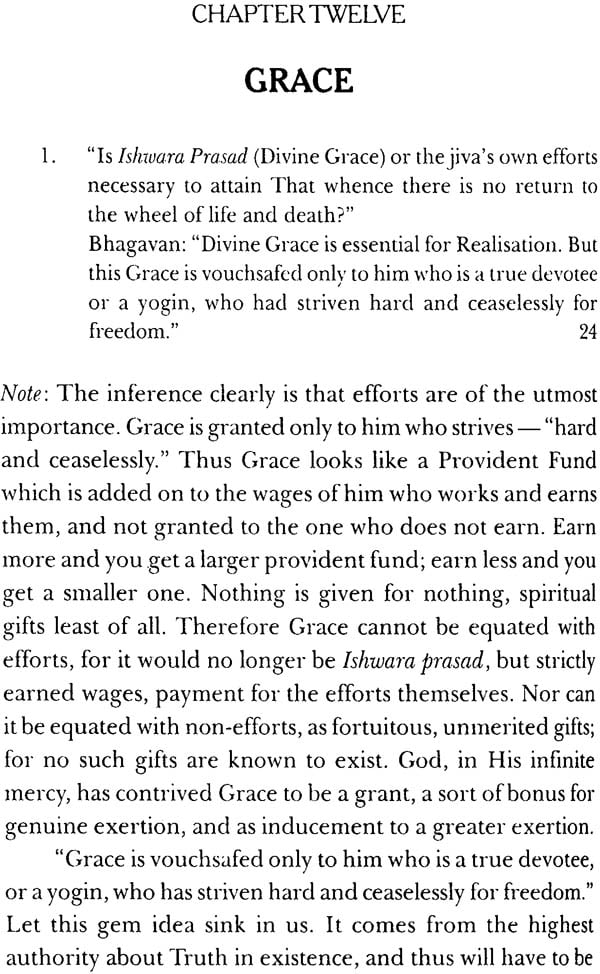 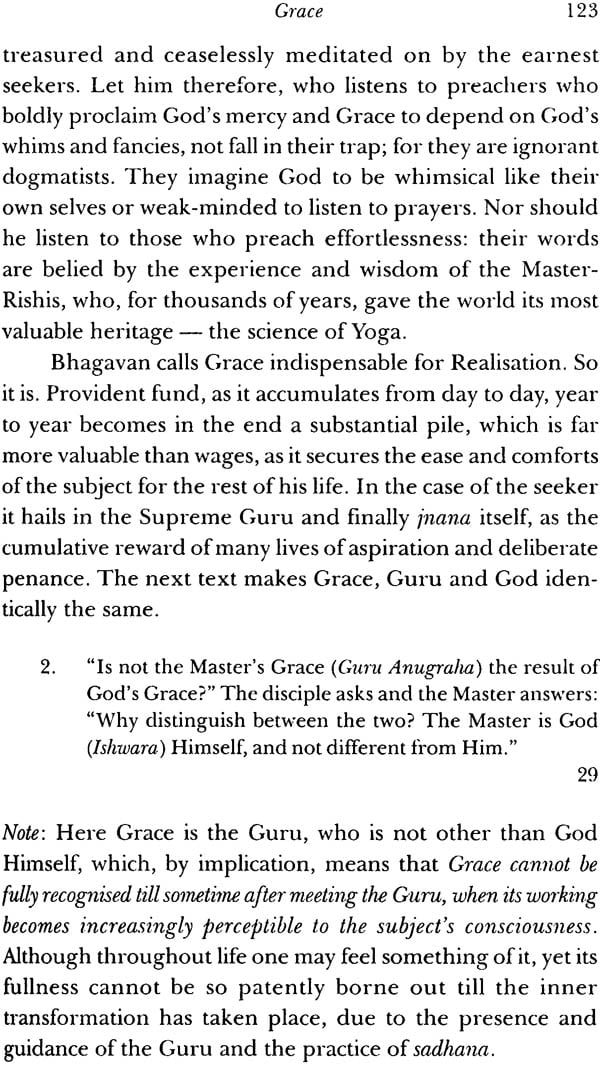 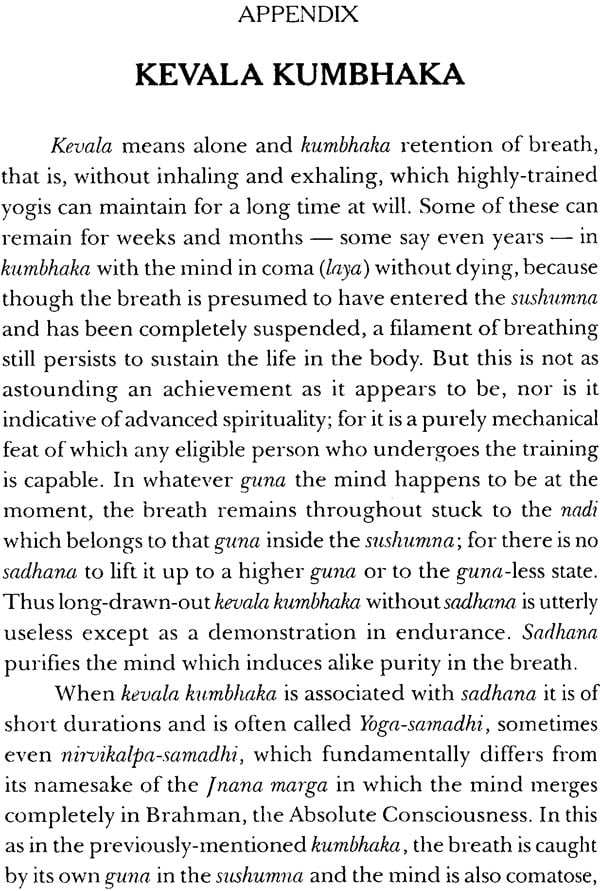 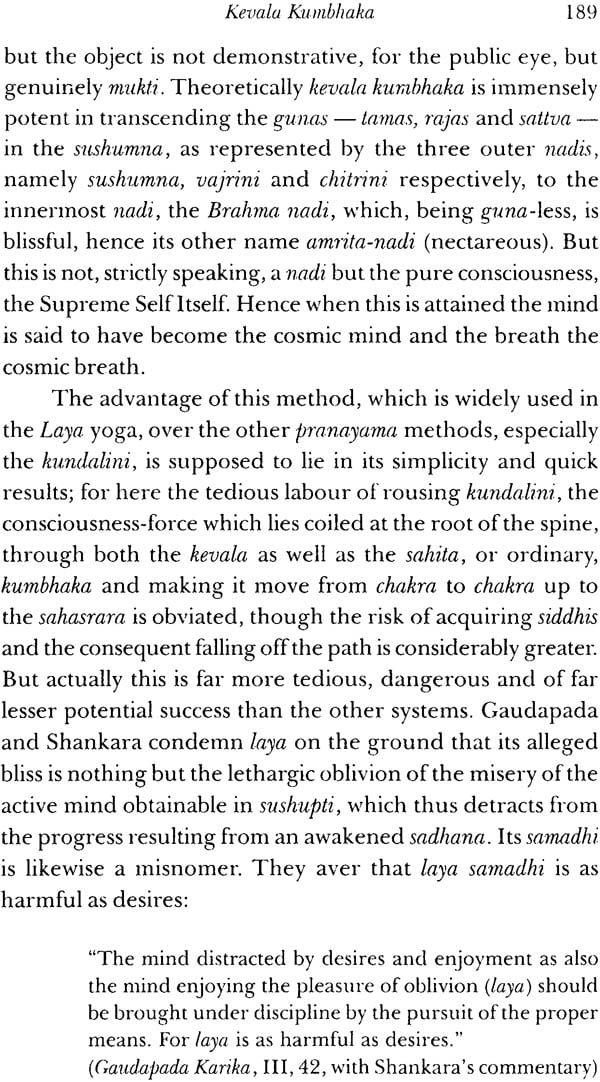 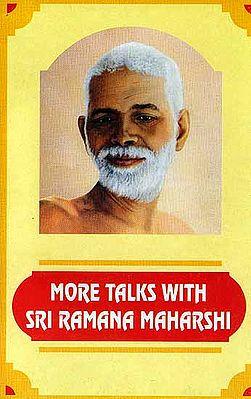 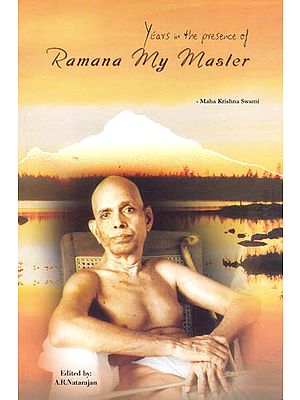 Years in The Presence of Ramana My Master
By A.R. Natarajan
$31
FREE Delivery

The Guiding Presence of Sri Ramana (An Old and Rare Book)
By K. K. Nambiar
$12 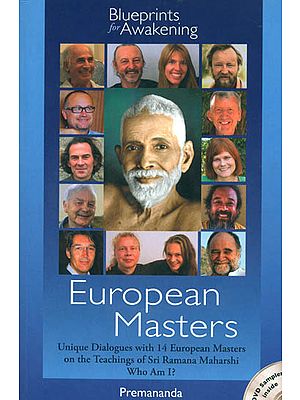