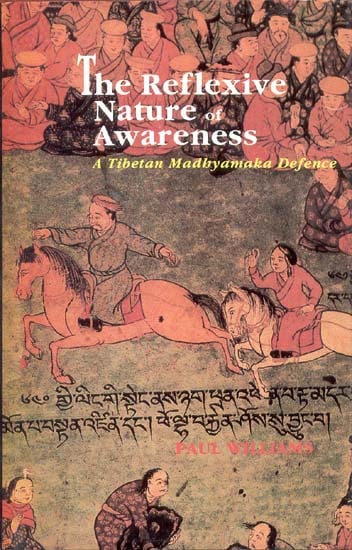 According to the Tibetan Tsongkha pa one of the eight difficult points in understanding Madhyamaka philosophy is the way in which Prasangika Madhyamaka does not accept even conventionally that reflexivity is an essential part of awareness - that in being aware (ranging). One of the most systematic and detailed refutations of Tsongkha pa's approach to this issue can be found in the commentary to the ninth chapter of the Bodhicaryavatara by the rNying ma lama Mi pham (1846-1912), together with Mi pham's reveals a vision of what is going on in Madhyamaka which is rather different from the more familiar Tibetan approach of Tsong kha pa.

Paul Williams places this controversy in its Indian and Tibetan context. He traces in detail Mi Pham's position in his commentary on the Bodhicaryavatara, the attack of one of his opponents, and his response, as well as indicating ways in which this controversy over the nature of awareness may be important within the context of Mi pham's rNying ma heritage of rDzogs chen thought and practice.

This book is the first book length study of its subject, and also includes a reprint of a previous paper by Williams on the reflexive nature of awareness, as well as the relevant Tibetan texts from Mi pham. The book will be of interest to all students of Indian and Tibetan Madhyamaka, as well as associated areas of Buddhist thought such as Yogacara, and the philosophy of Dhramakirti. It will also be of value to those concerned with the intellectual foundations of rDzogs chen.

DR. PAUL WILLIAMS is Reader in Indo-Tibetan Studies, and Codirector of the Centre for Buddhist Studies, University of Bristol.

Those with an interest in these things are now famil- iar with the idea that the philosophical and meditative tradition called rDzogs chen, known most notably from the rNying ma pa school of Tibetan Buddhism, teaches a primordial substratum (gdod ma'i gzhi) which while beyond all conceptuality is commonly referred to using terms which have a primary men- talistic significance. For example, this primordial substratum is spoken of as 'mind-as-such' or 'the ve ry nature of mind' (sems nyid/sems kyi chos nyid or sems kyi rang bzhin). Another important term is rang gi rig pa, 'awareness of itself or 'reflexive awareness', some- times referred to as 'a mere gnosis which is reflexive awareness' (so so rang rig pa'i ye shes tsam). This re- flexivity of the primordial substratum is one of its most important characteristics, indicated in the use of such metaphors as 'luminosity' (gsal ba) or 'clear light' ('od gsal), and the use sometimes of the mirror-image in trying to give some analogous understanding of that which is held to be beyond all conceptuality. Com- mon to many of these metaphorical,.images is the idea of something which renders itself known in the very act of referring beyond itself to others. Thus, to use a common image, the lamp makes known objects in a dark room and in so doing makes itself known too. It is not necessary to bring another lamp ad infinitum in order to illuminate the first lamp. The mirror is known in its reflectivity, in reflecting an image it also makes itself known as a mirror. We can speak of this quality found in mirrors and lamps-but, in Buddhist thought, most clearly and notoriously in lamps-as reflexivity. The lamp is reflexive, it illuminates itself in the very act of illuminating others.

The primordial substratum in rDzogs chen (and Mahamudra too for that matter) is of the very nature of mind-as-such, and it is characterised by reflexivity. This primordial substratum, however, while in some sense ultimate, is not thought of as something com- pletely other than the relative, the conventional. The nature of mind-as-such could not be divorced from mind, whatever that mind may beincluding every- day consciousness (rnam shes). Tibetan systems al- ways strive to show how the two truths, ultimate and conventional, are finally integrated. The ultimate na- ture of mind (= ye shes, 'gnosis'), mind-as-such (sems nyid) , while completely undefiled, always pure, is necessarily the ultimate nature of all mind (indeed all things). Thus if mind-as-such is fundamentally characterised by reflexivity, it could not be that this reflexivity 'comes into existence when mind-as-such is realized in the enlightened understanding. Rather, reflexivity is the very characteristic of all mind, it is what mind is-mind, consciousness makes itself known in the very act of knowing things which are other than it Indeed the very presence of reflexivity in all consciousness is closely integrated with the re- alization of the presence of mind-as-such in all con- sciousness.

There is no problem in seeing that all this is in- deed the rDzogs chen perspective.! The idea that all consciousness is in its very nature characterised by self-awareness (rang rig/svasamvedana) is also a view held widely in Indian Mahayana thought. It is an es- sential feature of Cittamatra (Yogacara), and is de- fended with epistemological sophistication by Dhar- makrrti. As we shall see, it plays an important role in the formation by Santaraksita of what Tibetan doxographers call 'Yogacara-Svatantrika Madhya- maka'. On the other hand the self-awareness of con- sciousness is attacked with vigor as part of their criti- cisms of Yogacara Cittamatra by the Svatantrika Bhavaviveka and also by Candrakirti and Santideva. Candrakirti and Santideva are both spoken of in the Tibetan tradition as 'Prasangika Madhyamikas". Thus it would seem prima facie that the rDzogs chen perspective on self-awareness has some affinities with the Cittamatra trend of Indian thought, but definitely not with Prasangika Madhyamaka. On the other hand no Tibetan tradition and few thinkers from the eleventh century onwards would be prepared to ad- mit to holding anything other than a form of Madhyamaka, usually Prasangika Madhyamaka, as the highest philosophical viewpoint (lta ba). No one would want to admit to holding Yogacara Cittamatra as the highest viewpoint.

There is no doubt that any view of an ultimate re- ality-whether mentalistic or not-could have prob- lems in integrating with a Prasangika Madhyamaka perspective which clearly criticizes all ultimate, in- herently existent, entities. Nevertheless, there are various strategies by which they could be reconciled.

A problem arises, however, with what is held to be a Prasangika approach to the conventional. We have seen that while reflexivity ('self-o.wareness') is a feature of the rDzogs chen ultimate reality, it is impor- tant that this reflexivity is also present in all mental states, in all states of consciousness. Consciousness qua consciousness is reflexive.s While a follower of rDzogs chen might be able to accommodate the Prasangika denial of any putative Ultimate Reality, what of the Prasangika denial of what are in fact es- sential features of the rDzogs chen ultimate reality? What of the denial of svasamvedana? One response would be to suggest that while the Prasangika does in- deed deny self-awareness, that denial is of an ultimate self-awareness (which we could then cope with, in fact neutralize, using the suggested strategies above), but does not deny that consciousness qua conscious- ness, in other words consciousness as known in the world, is self-aware. In other words, the Prasangika denial is of only the ultimate status of svasamvedana, and does not incl ude its conven tional existence as in- deed an essential feature of what we know and accept conventionally as consciousness. The problem here, however, is that from at least the time of Tsong kha pa and the foundation of the dGe lugs tradition of Tibetan Buddhism in the early years of the fifteenth century it has been strongly urged that the Prasangika denial of svasamvedana is a refutation of the existence of self- awareness or reflexivity both ultimately and convention- ally. Indeed so strongly did Tsong kha pa hold this view that he saw it as one of the eight difficult points which serve to distinguish Prasangika Madhyamaka from other Buddhist tenet systems. Thus it is cen tral to Tsong kha pa's understanding of the view of Prasangikas like Candrakirti and Santideva that no consciousness at all can be characterised by this fea- ture of self-awareness or reflexivity . 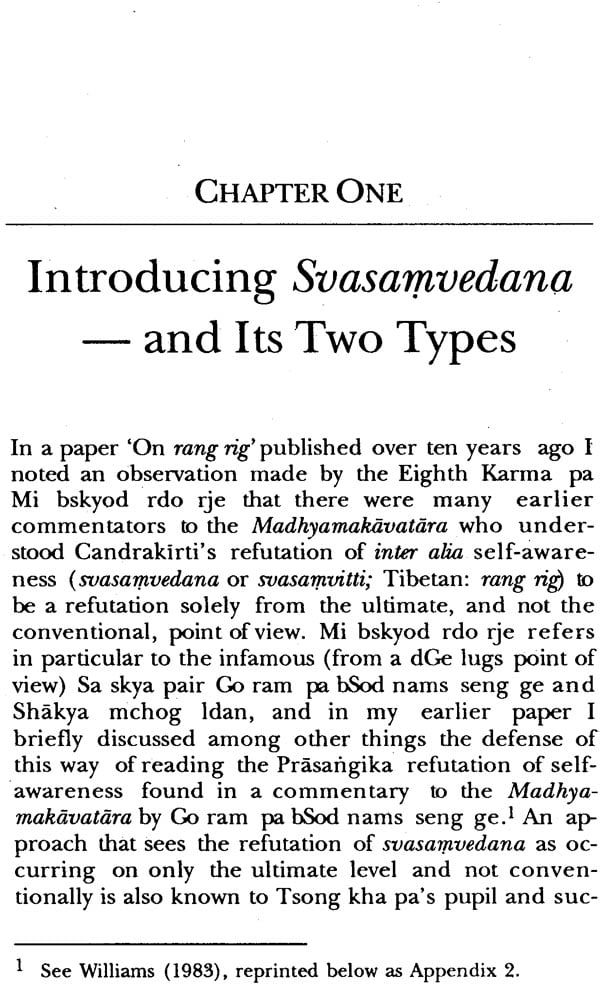 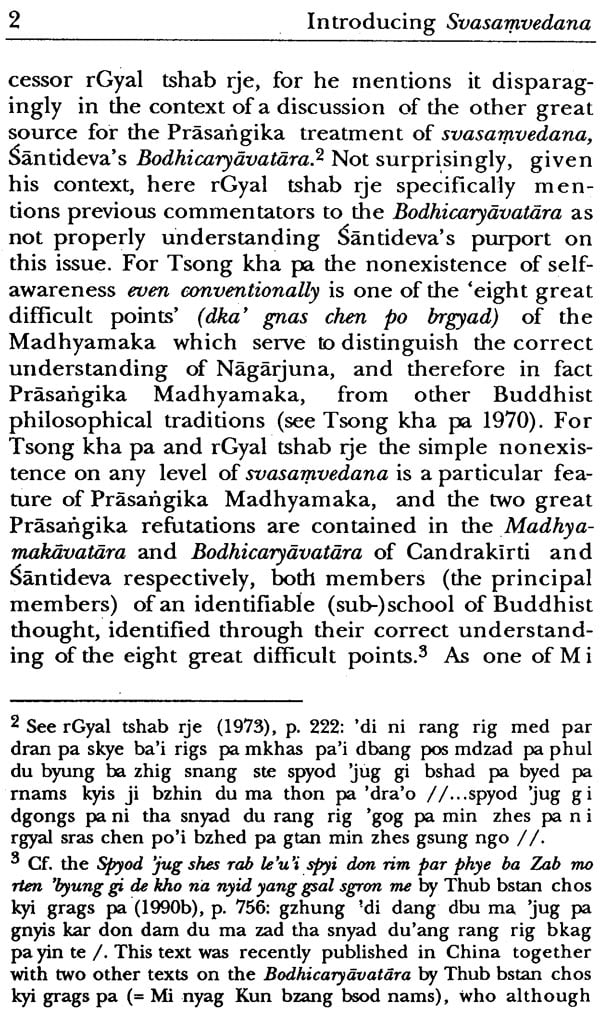 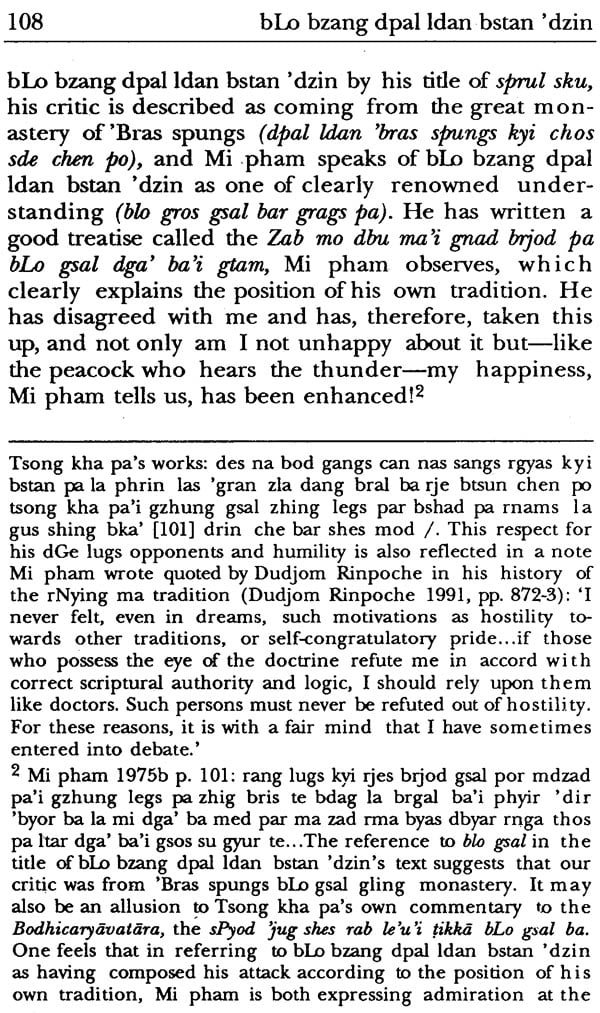 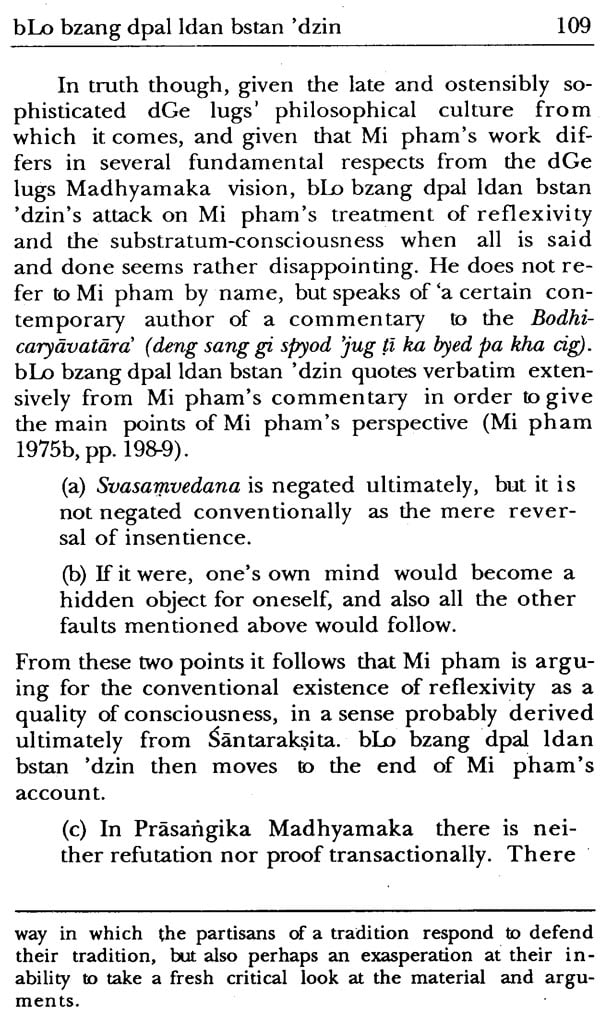 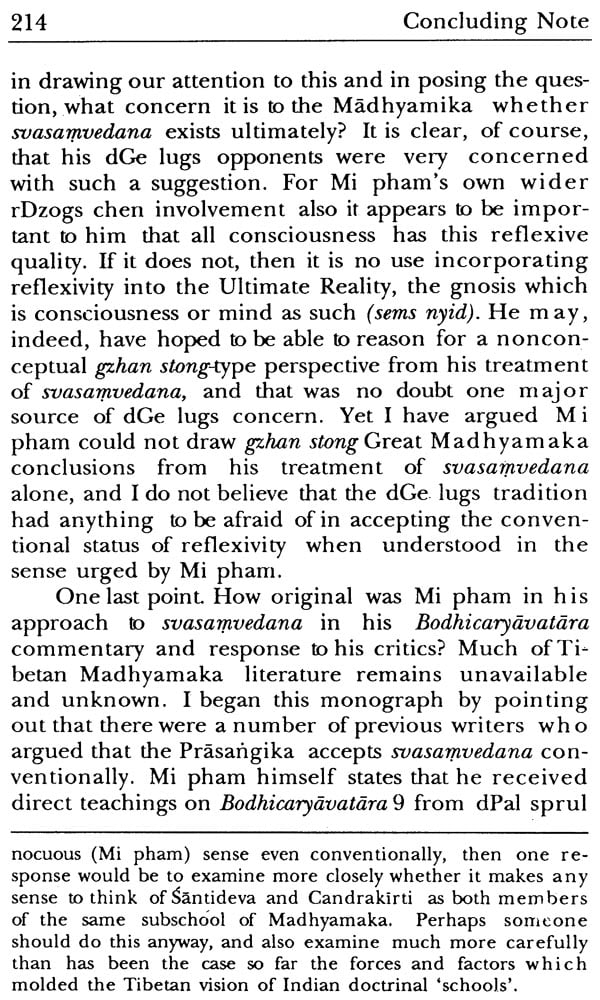 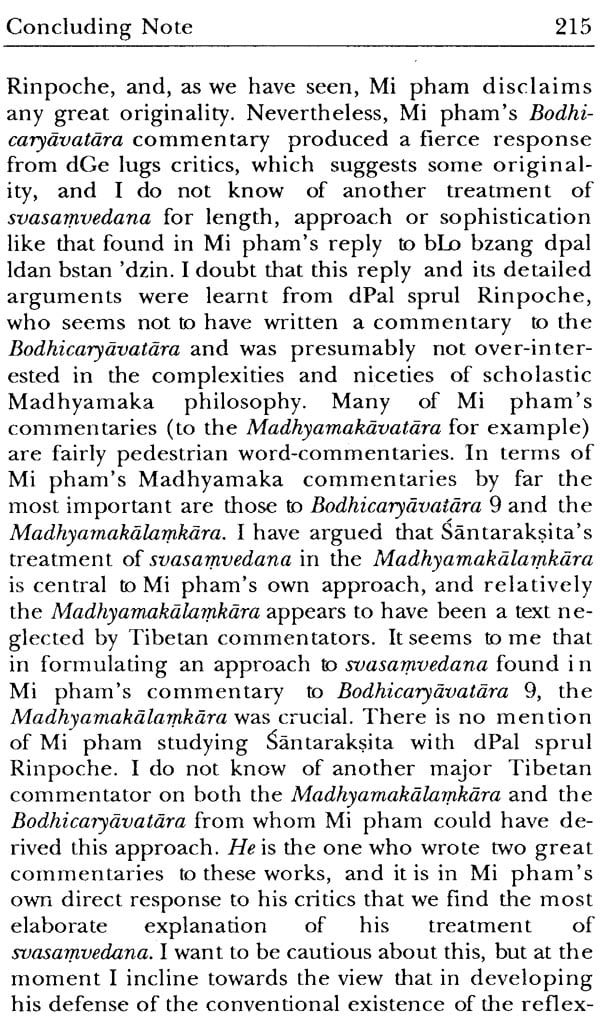 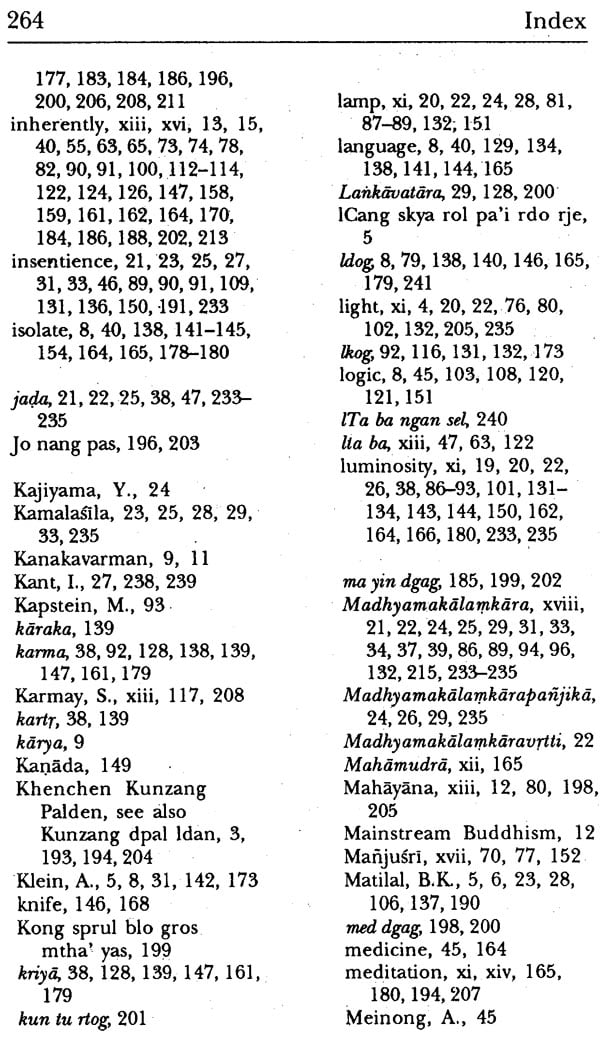 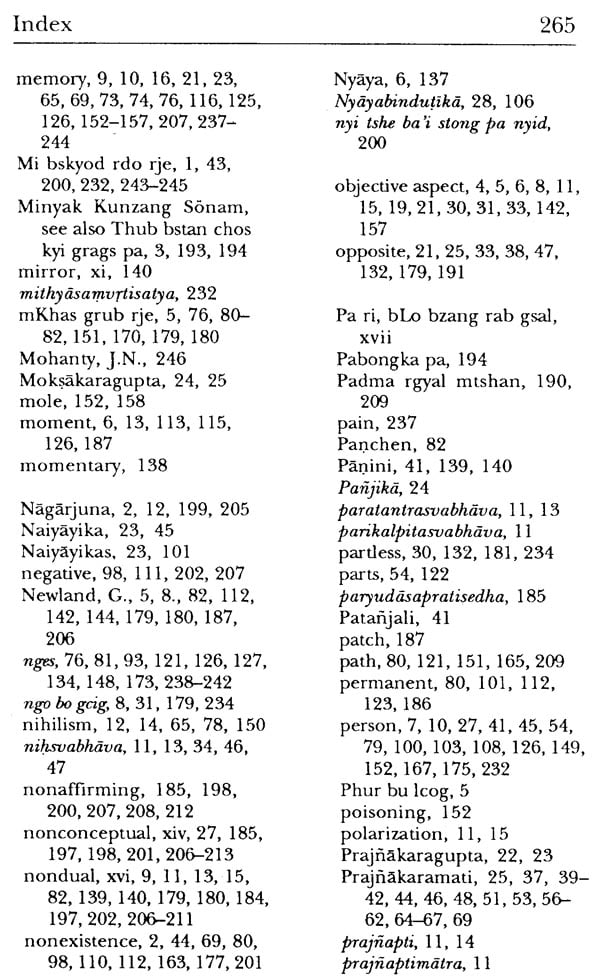