Sadhu Sanga (The Power of the Association of Devotees)

The Vedic scriptures are replete with the glories of the association of the devotees of lord Krishna, even if that association has been for only a moment. This book is an attempt to compile some references from the scriptures to highlight the importance of Vaisnava Sanga and to elaborate on the dangers of Vaisnava aparadha.

The Author of this book `Sadhu Sanga', Sriman kratu Das Ji Maharaj, was born on 5th July 1944 in a village namely Lachharas located in Gujarat, India. He was born at his maternal grandfather's home. His maternal grandfather was also from a Vaishnava cultured family. Maharaj exhibited leadership qualities right from his childhood. He was the president of the Student Union at Vakal High School, Mobha Road, Vadodara, Gujarat. After completion of his civil engineering from Vadodara, he went to the United States of America and pursued his Masters of Science from St. Louis University in 1972.

In 1968, he married Srimati Amrita Keli Devi Dasi who was also a religious woman and surrendered to Lord Krishna. Both came in contact with ISKCON in 1970 and joined full time in Toronto ISKCON Temple in 1974. In 1976, when they met Srila Prabhupada for the first time, Srila Prabhupada accepted them and gave his blessings. After a year they took initiation from Srila Prabhupada.

Even during his professional life in USA and working as a successful civil engineer in US and Canada, he never got influenced by the western culture. Inspired by Srila Prabhupada, the author resigned his job and became a full-time devotee in ISKCON. He kept himself busy day and night for preaching and pursued various spiritual services. He was the Director of congregational preaching in Toronto, Chicago, and Vancouver temple. Later in 1987, he became the Temple President of ISKCON, Vancouver. He also contributed as a civil engineer in building Vancouver and West Virginia New Vrindavan temple.

After preaching for a long time in western countries, Sriman Kratu Das Ji Maharaj came back to India in 1983 and started preaching in Gujarat. After returning from the USA, he even traveled across the villages by bullock cart and distributed Srila Prabhupada books. Later, Maharaj continued his preaching activities in different parts of India. In 1997, he became the Temple President at ISKCON Sri Radha Parthasarathi temple in New Delhi.

In 2002, he was authorized as an ISKCON initiating Guru, and his preaching activities increased many folds. He traveled to many different countries even during tough situations and changed the lives of many people.

According to the order of Sri Chaitanya Mahaprabhu, he was always participating in various preaching activities all over the world. Though he considers staying at Vrindavana as the best option, but to obey Srila Prabhupada's order, he travels to every corner of this world for the benefit of aspiring devotees. He is enthusiastic in implementing different activities in preaching as instructed by Srila Prabhupada, e.g., book distribution, sankirtan, lecture on Bhagavad Gita and Srimad Bhagavatam, serving Vaishnavas, pandal programs, conducting various bhakti retreats, etc.

He is the author of the books - Sadhu Sanga, Anand Ki Aur, Maya Ki Maar, Mann Ki Manmani (All Hindi) and Bliss & Beyond (English). These books explain the purpose of life based on the teachings of the Vedic literature.

"The thoughts of My pure devotees dwell in Me, their lives are surrendered to Me, and they derive great satisfaction and bliss enlightening one another and conversing about Me."

Devotees guide, enthuse, and cooperate with one another to advance in devotional service. This relationship continues in the abode of Lord Krsrla where He is never alone but is always surrounded by unlimited living entities who are engaged in His loving devotional service. These living entities serve the Lord together for one single goal - to give Him pleasure. They achieve ultimate peace and bliss by conversing with each other about Lord Krsna and His pastimes. The association of devotees is not only necessary in the beginning of our devotional lives, but is just as important throughout our devotional lives.

Srila Prabhupada also expected his disciples to love, trust and cooperate with each other in order to keep themselves fixed in devotional service as well as to keep the ISKCON movement growing, without this it is not possible to fulfill the desire of Lord Chaitanya and the whole guru parampara to spread Krsna consciousness around the world to all the towns and villages. The necessities that we learn the art of associating with devotees who are on different levels of devotional service and that we learn to avoid committing offences at their lotus feet.

This book will help us, the members of this great society, to be thankful for one of the gifts that Srila Prabhupada has given us: the association of Lord Kisna's devotees. By being appreciative of such pure devotees, we can acquire their qualities just as an iron rod behaves like fire when kept in contact with fire. Thus, we'll be able to associate with them favorably and join hands to execute the desire of Srila Prabhupada. We should endeavour for the constant association of devotees and through this association, our progress in devotional service will grow exponentially and we will be able to relish the joy and pure bhakti towards Lord Krsna.

The association of devotees of the Lord or "sadhu-sariga" is very important in our devotional lives. Sometimes we become very complacent and commit offences against the vaishnavas which is the root cause of our fall down from devotional service to Krsna. This is very devastating.

Devotees who are practicing Krsna consciousness will get immense inspiration and will become enlivened from this book. This book contains many quotations and verses from His Divine Grace A. C. Bhaktivedanta Swami Prabhupada's books such as Bhagavad Gitet, Srimad Bhagvatam, Caitanya Caritamrita, etc.

Once when I visited the Denver, Colorado temples, His Grace Chaitanya dev prabhu chose the subject of "sadhu-sanga" for my four day seminar and afterwards inspired me to write this book. 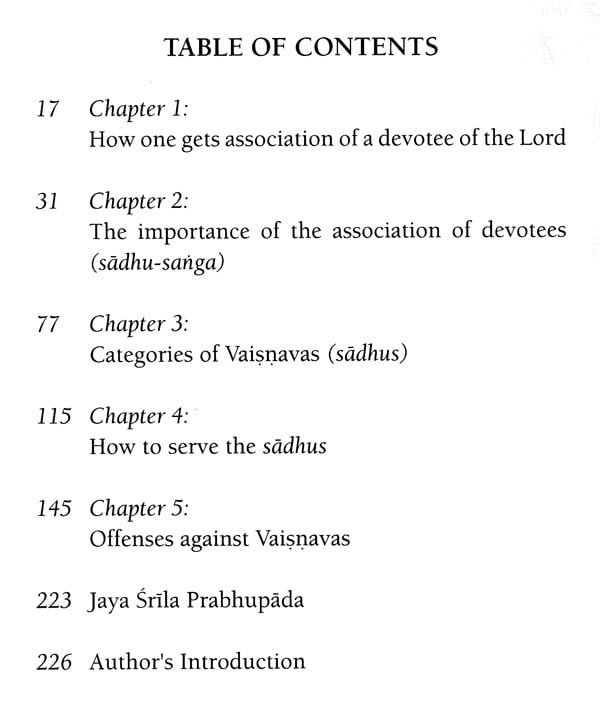 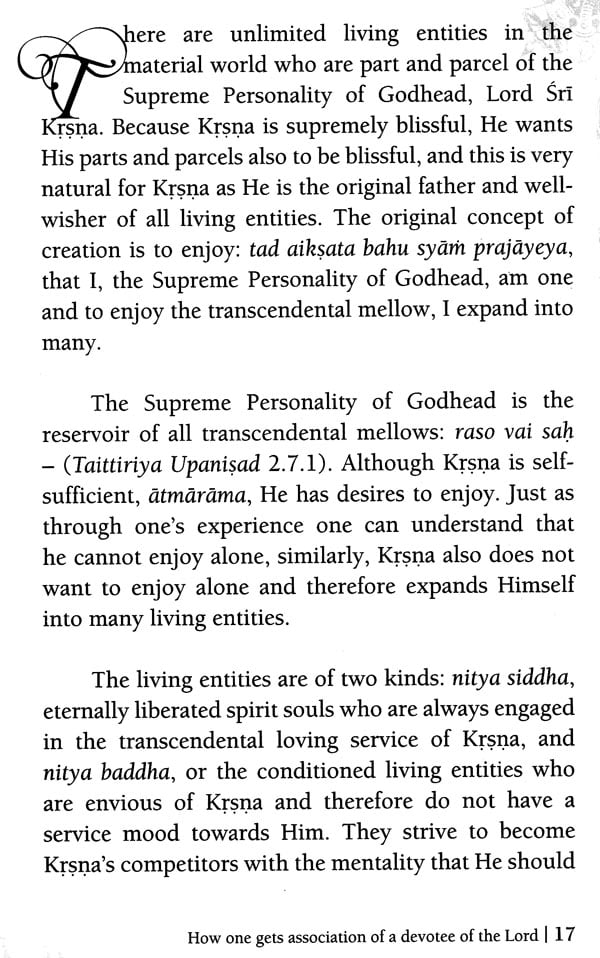 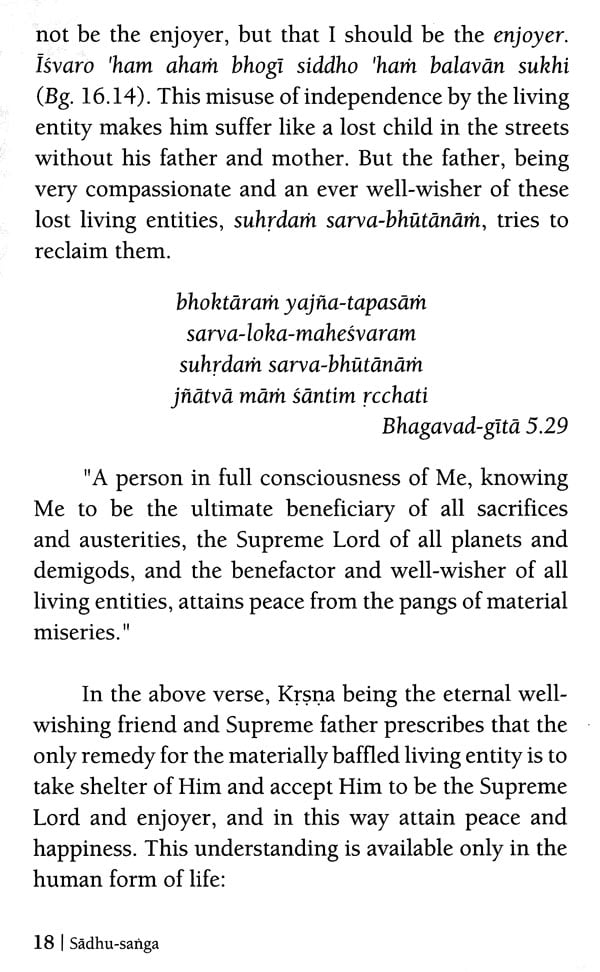 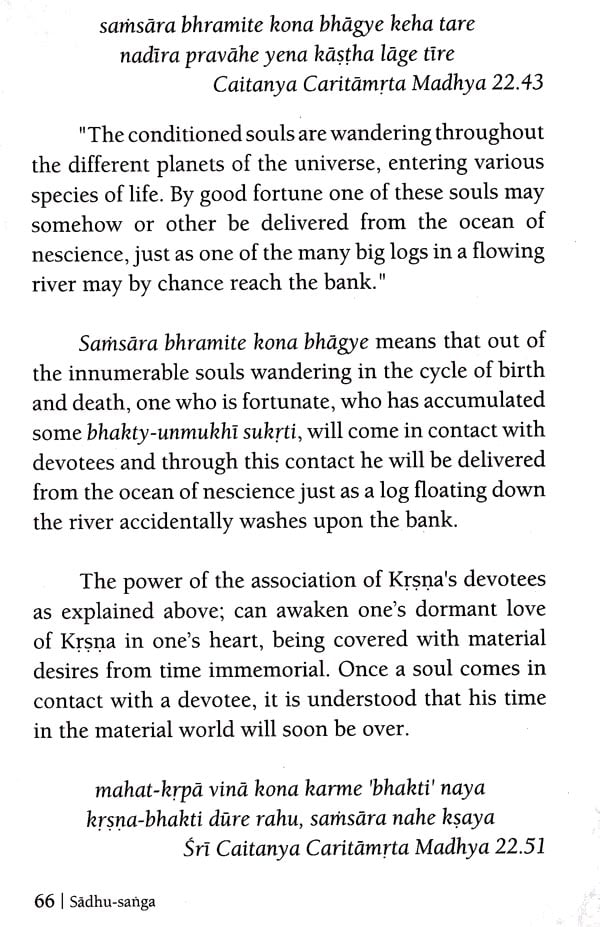 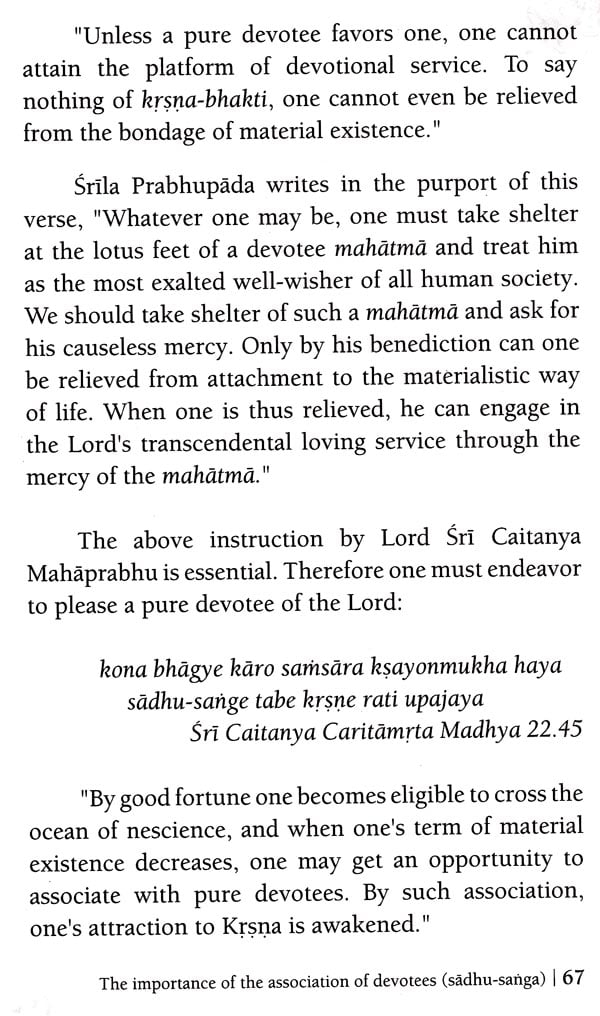 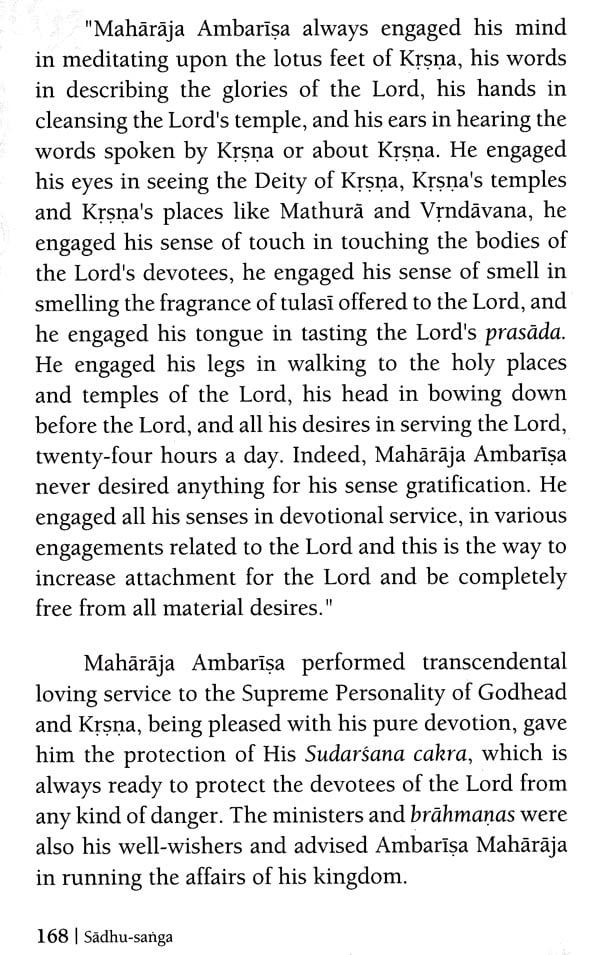 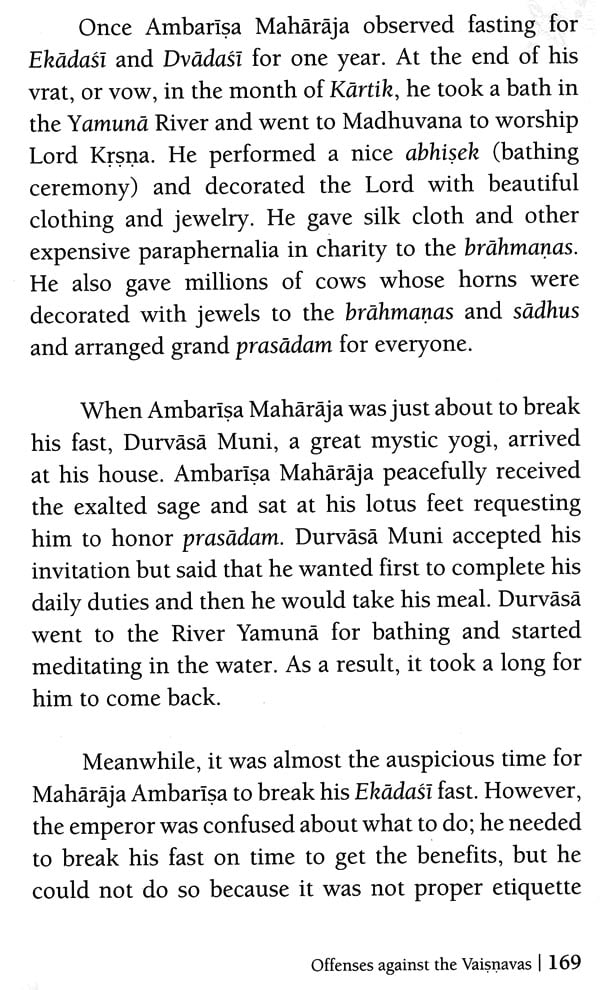 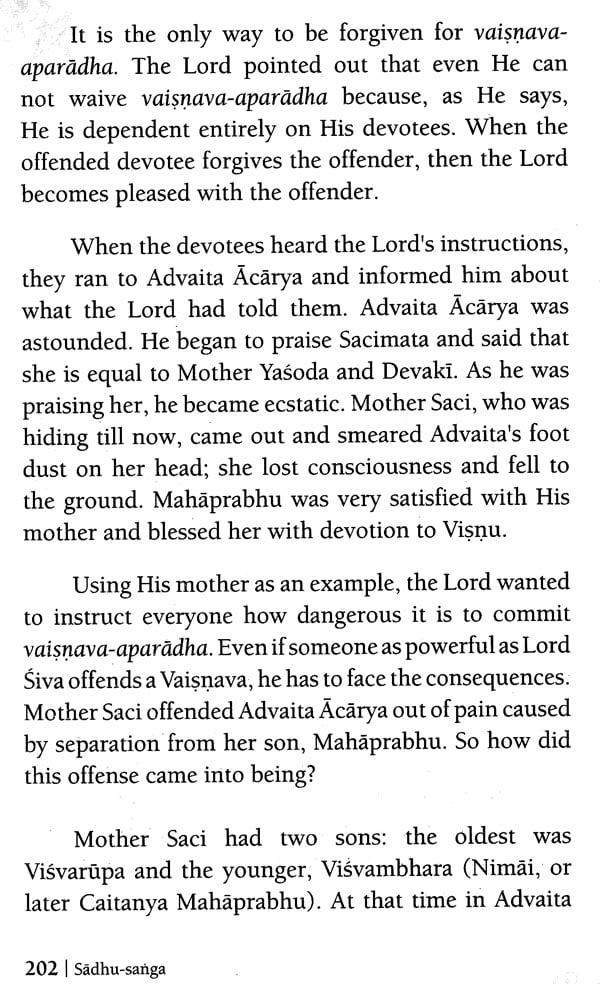 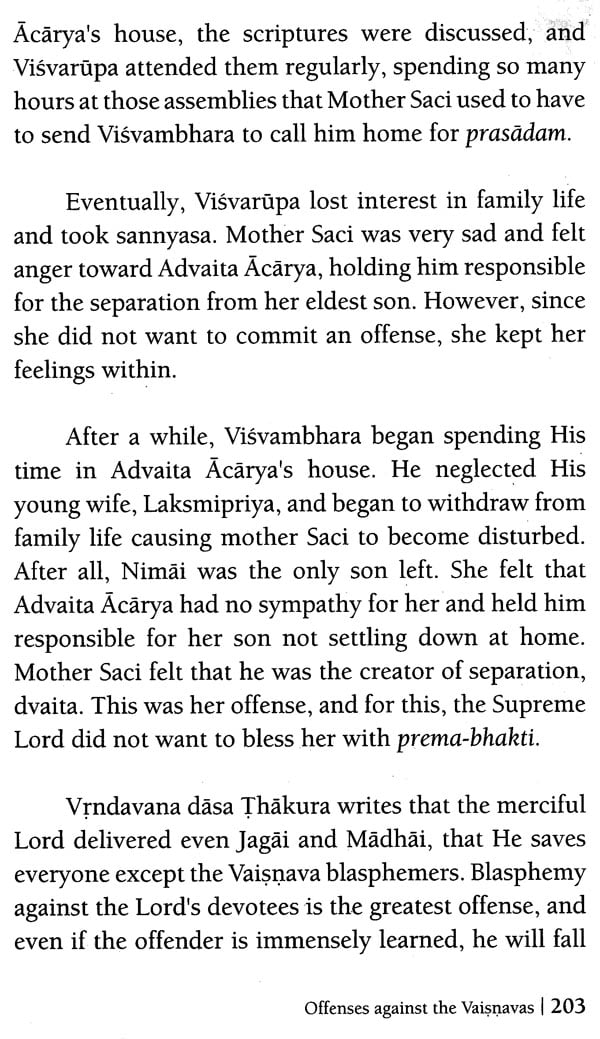 Bliss and Beyond
By Kratu Das
$22
FREE Delivery