The dictionary meaning of kayamat is 'dissolution of the universe'. It is also interpreted as 'last day of judgement' and 'day of resurrection'. This book Kayamatnama provides a detailed analysis of the subject; its cause, purpose, execution and consequences, as described by Mahamati Prannath.

This book consists of two parts, originally named as - chhotaa (minor) and badaa (major). Its verses descended during the period when Mahamati Prannath and Maharaja Chhatrasal moved together from Panna in V S 1744 on their way to fight against the hostilities of Aurangzeb. Then onwards Chhatrasal was victorious in all his encounters with Mughal army. In between Mahamati proceeded to Chitrakoot and stayed there for a year. This was the time when the verses of Kayamatnama were uttered by him. The first part has two sections of217 verses while the second is of 24 sections containing 531 verses. The language is Hindi with adequate use of Urdu, Persian and Arabic words. Due to its theme and subject of ultimate salvation Kayamatnama is considered to be the 14th and the last book of Tartam Vani.

In all his earlier books Mahamati Prannath has referred to himself as Meheraj (his childhood name), Indravati (his eternal name of Paramdham) and Mahamati. The name Mahamati is considered to be a confluence of five powers, this is - zeal of the Supreme Lord, the soul of His consort Shyama, the brilliance of Tartam, the will of the Supreme Lord and the wisdom of lord Akshar Brahma. But he has offered the authorship of the second part of this book to his prime disciple Chhatrasal.

The first book of Tartam Vani is Raas. It is based on Shrimad Bhagwat and describes here the union of soul with the Supreme Lord. On the other hand this last book Kayamatnama is related with the events concerning resurrection as mentioned in the Semitic literature. Thus in this way Mahamati has laid down the foundation of a Universal Religion where all religions are respectfully accommodated. By this act the variety of conflicts between the different religions are bound to be sorted out and peace shall prevail among the entire humanity.

First part of Kayamatnama is primarily concerned with the relations of Supreme Souls (Brahma Srishties) and this perishable world. According to him these souls are characterized by their virtues of performing rather than mere narrations and utterances. They firmly adhere to doing what they say. Second section ofthis part deals with the messages of the various prophets delivered from time to time. Mahamati emphasizes the importance of unshakable faith in the spiritual knowledge of Tartam. He says that one can attain the Supreme Abode by following the path of true love for Him. In the second part he announces that the occurrence of resurrection is not far off and even indicates the possible dates of its taking place. One who is born is bound to die and dissolution of world is also a certainty. Mahamati defines that resurrection is nothing but ultimate enlightenment of the soul resulting in its salvation and liberation. He preaches that one's goal in this world should be directed in the direction of attaining the blissful Abode.

The verses of Mahamati Prannath are an ever-inspiring flow of message of eternal knowledge for the welfare ofthe mankind and provide the most effective dose for overcoming the sufferings of this world and deliverance from the cycle of birth and death. His well known saying, 'Sukh Sheetal Karoan Sansaar " is in true spirit for establishing the atmosphere of divine harmony and tranquillity for one and all.

Finally I wish to express my heartfelt gratitude to Dr. R K Arora for carrying out this very pious and uphill task of translation of Tartam Vani s books. As always Smt. Vimla Mehta and Shri. K K Mehta have been a great source of inspiration. Association of Dr. Pran Gilotra in edition work is also acknowledged.

All religious scriptures provide many hints and indications about the occurance of the last day of judgement. The human body has been described to be like a grave with the soul sleeping there in a state of ignorance. Here Mahamati Prannath is giving a call to all the souls to awaken themselves from this dreamy existence of illusive world. Mahamati has repeatedly preached that the soul must rise above the body consciousness and recognise the true reality of the Absolute. According to him it is high time that the soul understands the real significance of the eternal knowledge and unites herself with the Almighty.

Kayamat is such a phenomenon of awakening that it requires severing of relations with the worldly attachments. This is not a kind of event only but an eternal truth of life. Mahamati has described it in both the aspects, namely- universal and individual. In the latter it means the demise of the world of dream. The former refers to end of one age and beginning of another era of new concept of religion i.e. changeover from age of duality to that of unity. There are three different games that the Lord plays in this world; these are of ignorance, knowledge and spiritual universalisation, The last one is directly connected with kayamat.

It is a fact that occurrence of resurrection is not far off and one has to wait for the coming of the Lord in one's life. This life has to be full of truth and love for Him. Mahamati has clarified that the souls born on earth belong to three categories. The most common born out of 'kunn' are Jeev Srishties, and those from consciousness of Akshar Brahma are Ishwaree Srishties. The divine souls who come to earth for establishment of righteousness originate from the Absolute spirit are the Braham Srishties. Only the last category of illumined souls is capable of appreciating the true meanings of the numerous hints given in the holy books regarding resurrection. In fact they come on earth to relish the worldly life and establish the basis of Universal Religion. Mahamati pleads that the Jeev Srishties, who are ignorant souls, are not be cursed as they are being led by Satan who is taking them on the wrong path of worldly pleasures. When the drama of this creation comes to an end then they will also be able to attain the eternal happiness by reaching the respective heavens according to their deeds. In this connection greatness of the Lord is expressed by Mahamati as:-

(It is ordained by the Lord every pride has a fall. He is compassionate to those who need His benevolence.)

Mahamati's call to Chhatrasal is like a warning about the oncoming of day of resurrection:-

Chhatrasal is being told here by Mahamati to make the souls come out of the attachments of this world. By quoting with the authority of Koran he explains the deep meaning underlying the Kayamat.

The enunciation of the new era of universal religion by Mahamati Prannath can be stated as - Up till now the Lord has wanted us to play the game of many faiths but it is the time now to unite the multiple forms of religions into the universality of the revelation in order to attain ultimate salvation. 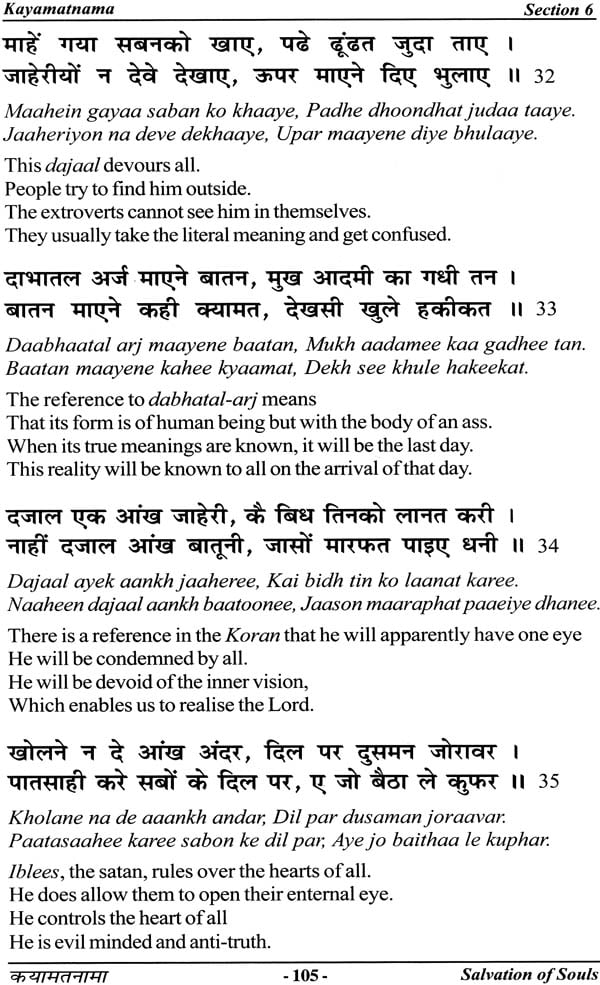 Is Salvation Not Possible without a Guru?
By Swami Ramsukhdas
$5.50