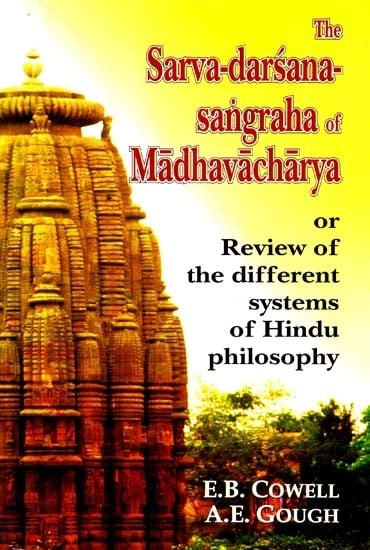 In this fourteenth century text 'A Compendium of all the Philosophical Systems' (of India) the author successively passes in review the sixteen philosophical system current in India at the time, and gives what appeared to him to be their most important tenets, and the principal arguments by which their followers endeavoured to maintain them. In the course of his sketches he frequently explains at some length obscure details in the different systems.

The systems are arranged from the Advaita-point of view. They form a gradually ascending scale-the first, the Charvaka and Buddha, being the lowest as the farthest removed from Advaita, and the last, Sankhya and Yoga being the highest as approaching most nearly to it.

The present translation was originally published serially in the Banaras Pandit between 1874 and 1878 and was carefully revised and republished in book form later and a second edition was printed in 1894. What follows is a reprint of the same.

I well remember the interest excited among the learned Hindus of Calcutta by the publication of the Sarva dar sana sangraha of Madhava Acharya in the Bibliotheca Indica in 1858. It was originally edited by Pandit Isvara-chandra Vidyasagara but a subsequent edition with no important alterations was published in 1872 by Pandit Taranatha Tarkavachaspati. The work had been used by Wilson in his Sketch of the Religious sects of the Hindus but it does not appear to have been ever much known in Indian MS. Copies of it are very scarce and those found in the North of India as far as I have had an opportunity of examining them seem to be all derived from one copy brought originally from the south and therefore written in the telugu character. Certain mistakes are found in all alike and probably areos from some illegible readings in the old Telugu original. I have noticed the same thing in the Nagari copies of Madhava’s commentary on the Black Yajur Veda which are current in the North of India.

As I was at that time the oriental secretary of the Bengal Asiatic Society, I was naturally attracted to the book; and I subsequently read it with my friend Pa4it Maheschandra Nyayaratna, the present Principal of the Sanskrit College at Calcutta. I always hoped to translate it into English; but I was continually prevented by other engagements while I remained in India. Soon after my return to England, I tried to carry out my intention; but I found that several chapters, to which I had not paid the same attention as to the rest, were too difficult to be translated in England, where I could no longer enjoy the advantage of reference to my old friends the Pandits of the Sanskrit College. In despair I laid my translation aside for years, until I happened to learn that my friend, Mr. A. E. Gough, at that time a Professor in the Sanskrit College at Banaras, was thinking of translating the book. I at once proposed to him that we should do it together, and he kindly consented to my proposal; and we accordingly each undertook certain chapters of the work. He had the advantage of the help of some of the Pandits of Banares, especially of Pandit Rama Misra, the assistant Professor of Sankhya, who was himself a Ramanuja; and I trust that, though we have doubtless left some things unexplained or explained wrongly, we may have been able to throw light on many of the dark sayings with which the original abounds. Our translations were originally published at intervals in the Banares Pandit between 1874 and 1878; but they have been carefully revised for their present republication.

The work itself is an interesting specimen of Hindu critical ability. The author successively passes in review the sixteen philosophical systems current in the fourteenth century in the south of India and gives what appeared to him to be their most important tenets and the principal arguments by which their followers endeavored to maintain them and he often displays some quaint humor as he throws himself for the time into the position of their advocate and holds as it were a temporary brief in behalf of opinions entirely at variance with his own. We may sometimes differ from him in his judgement of the relative importance of their doctrines but it is always interesting to see the point of view of an acute native critic. In the course of his sketches he frequently explains at some length obscure details in the different systems and I can hardly imagine a better guide for the European reader who wishes to study any one of these Darsanas in its native authorities. In one or to cases he could only draw his materials second hand controversialists but in the great majority he quotes directly from the works of their founders or leading exponents and he is continually following in their track even where he does not quote their exact words.

The systems are arranged from the Vedanta point of view our author having been elected in A.D. 1331 the head of the Smarta order in the Math of Sringeri in the Mysore territory founded by Samkara Acharya the great Vedantist teacher of the eighth century through whose efforts the Vedanta became what it is at present the acknowledged view of Hindu orthodoxy. The systems form a gradually ascending scale the first the Charvaka and Bauddha being the lowest as the furthest removed from the Vedanta and the last the Sankhya and Yoga being the highest as approaching most nearly to it.

1. I worship Siva the abode of eternal knowledge the storehouse of supreme felicity by whom the earth and the rest were produced in him only has this all a maker.

2. Daily I follow my Guru Sarvajna Vishnu who knows all the Agamas the son of Sarngapani who has gone to the further shore of the seas of all the systems and has contented the hearts of all mankind by the proper meaning of the tern soul.

3. The Synopsis of all the systems is made by the venerable Madhava mighty in power the Kaustubha jewel of the milk ocean of the fortunate Sayana.

4. Having thoroughly searched the sastras of former teachers very hard to be crossed the fortunate Sayana Madhava the lord was expounded them for the delight of the good. Let the virtuous listen with a mind from which all envy has been far banished who finds not delight in a garland strung of various flowers. 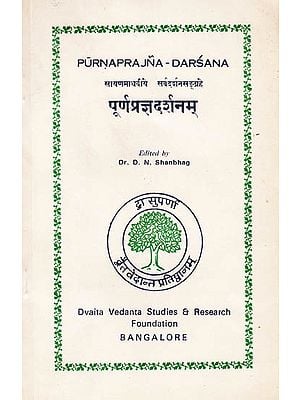 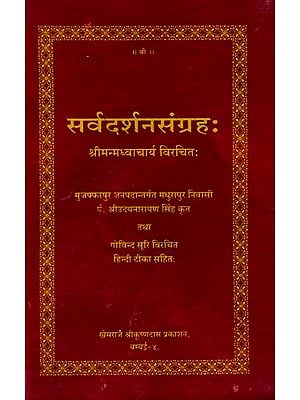 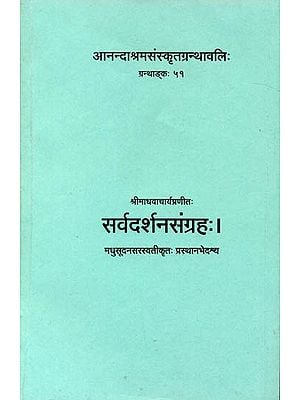 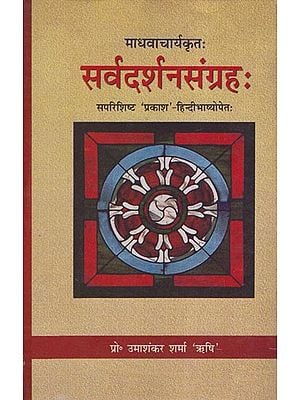 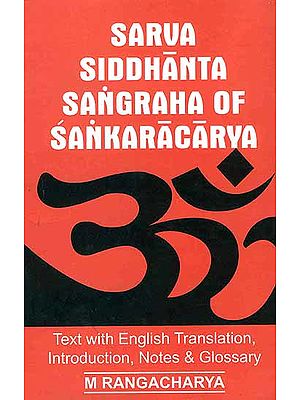 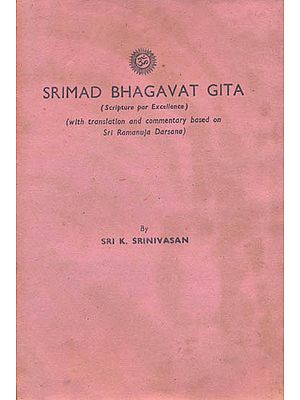 Srimad Bhagavat Gita (With Translation and Commentary Based on Sri Ramanuja Darsana): An Old and Rare Book
By Sri K. Srinivasan
$12
Out of Stock
$16  (25% off)