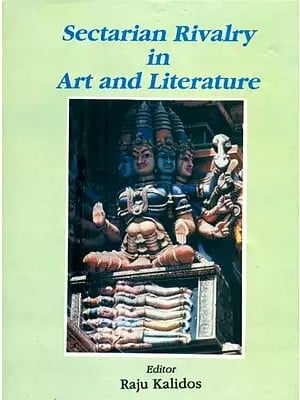 Sectarian Rivalry in Art and Literature

FREE Delivery
$64
$80
(20% off)
Quantity
Ships in 1-3 days
Notify me when this item is available
About the Book
The present book, a collection of ten articles, deals with the vicissitudes of sectarian confrontations in South India, particularly Tamilnadu, mainly with the factions of Hinduism during the medieval period (c. A.D. 500-1600).

Down to A.D. 550 Buddhism and Jainism dominated the helm of affairs in the South. The Alvars and Nayanmar, heralds of a renaissance in religious matters, systematically propagated the cults of'Visnu and Siva. The Bhagavata movement of the North was the root of this neo-scenario. By about A.D. 700 the march of heterodox cal sects was checked. The bhakti-based sects, having set their foot strongly, started abusing mutually in an effort to muster mass following. The disputes were mostly in the form of philosophical arguments, barring exceptional cases of violent clashes. Definitely there was no armed belligerency as it took place in' the West (e.g., the Crusades and 100 Years War). Nor did they follow the jihads of Arab-Turkish iconoclasts who destroyed temples and erected minars. The 1 Saiva-Vaisnava joined by Sak.la and others, clashes were of the cold war type and had a tremendous impact on the iconographical developments of the medieval period. The grim effects of sectarianism may be discerned in the plastic and pictoral arts of which a number of samples are enumerated- and illustrated. These are backed by the literature of the age, especially the hagiological works and hymns of the bhakti savants.

A group of eight authors under inspiration of the editor have taken the commendable effort to delve deep into the problem. This is a norm -setting area in art historical research.

About the Author
The Editor of the book, Professor Raju Kalidos, is Dean of the Faculty of Arts and Chairman of the Department of Sculpture and Art History of the Tamil University of Thanjavur. Born in August 1947, Raju's contribution to the nation is fitting if we look into the title and the sectarian trends of Indian politics at the time of the golden jubilee celebration of independence. Dr Kalidosisan authority on South Indian art and Tamil literature, especially it’s bearing on iconology. The Editor has to his credit four books and a number of articles in internationally reputed Journals, published from Rome, Cambridge (U.K.), London, Naples, Copenhagen and Sole. He has participated international conferences at home and abroad; especially of the International Association of the Historians of Asia (Hong Kong and Thailand) and International Congress of Asian and North African Studies (Hong Kong).

Publication in Journals of national level touch a centum. The associates of Raju Kalidos are equally meritorious, all having contributed/ published in the international Journals. They are R.K.K. Rajarajan, S. Gopalakrishnan, V. Latha and A. Meeneshwari. J. Rangasvami is Reader in the Department of Philosophy of the Tamil University. S. Ganeshram is Lecturer in the S.R. Naidu College, Sattur. Both of them are associated with the Editor in research projects for a pretty long time.

V. Balambal was Professor of History in the University of Madras.

A major UGG project, completed by Raju Kalidos on the Iconography of Early Medieval South India is being published by the Sharada Publishing House in five volumes.