About fifty years ago medieval saints were dismissed by Indian pundits as illiterate poets whose writings were not worth studying from the point of view of literature. But the translation of Kabir's poems by Rabindra Nath Tagore suddenly aroused a deep academic interest in the writings of these saint poets.

"Garib Das of Rohtak District founder of the Garib Dasi sect", writes Dr. Mohan Singh, "may be considered as the last of the Hindu Raj Yogis and Bhakta Poets who had as great a mastery of popular poetic language and style as Ghulam Farid had, but whose knowledge of other Indian languages was greater than that of any other poet of medieval India, the only poet who comes near to him being Shah Qayam Din Chisti of Kari Goan in Bombay".

His padas, according to Dr. Ram Kumar Verma, exceed 17,000. According to Swami Chetan Das the total number of his padas is about 18,500. No other saint poet of medieval India has written in such abundance and on so many facets of spiritual life.

Shri Garib Das was a true saint in the sense that he never tried to win favour of kings and rulers. He never sought the patronage of any court. During his life- time, many invasions and upheavals took place. One king after another was toppled. But we do not find a single reference to events to which he was almost an eye- witness.

This is the first authentic and critical work, ever published, on the life and works or Sri Garib Das. The author, Dr. K.c. Gupta, was attracted towards Garib Das when he attended some satsangas in the company of his father who was a great devotee of the Saint. His literary interest in the writings of Garib Das was aroused after he had passed his M.A. in Punjabi from the Punjab University in the year 1951.

In the author's own words: "I started collecting and studying all his writings, some of which were available in Gurumukhi script and others in Devanagari. Finding that there was a great difference in the text of printed versions,

This book discusses in depth and detail not only the mysticism and philosophy of Garib Das but also his language and poetry in all their richness and range. Chapters on the broad stream of the Bhakti Movement and the social and political conditions of Garib Das' life-time, place the saint in a proper spiritual as well as historical context,

We have described him as Haryana's Saint of Humanity because although he was born in a Hindu family and lived his whole life in Haryana in the eighteenth century, his songs transcend all sectarian, spatial and temporal bounds and express Man's eternal seeking for the Divine.

The Bhakti movement gave us a treasure house of literature. The medieval saints have made an outstanding contribution to the provincial literatures of the period. There was a remarkable development of all the provincial languages under this new inspiration. From Sheikh Farid and Namadeva down to the eighteenth century, a literary tradition was developed whose aim was the moral and spiritual regeneration of our country. To this literary tradition belonged Garib Das of Rohtak.

About fifty years ago, medieval saints were dismissed by Indian pundits as illiterate poets, whose writings were not worth studying from the point of view of literature. But the translation of Kabir's poems by Tagore and the critical study of the life and writings of medieval saints by Christian missionary scholars, suddenly aroused a deep academic interest in the writings of these saint poets. Punjabi and Hindi also acquired a very respectable status. The language and thoughts of all the great saints began to be studied minutely.

My father was a great devotee of Sant Garib Das of Rohtak. He took me a number of times to the Satsang of Garib Dasi sect where the Granth of Garib Das was read loudly, It was only when I had passed my M.A. examination in Punjabi in 1951 that my literary interest in the writings of Garib Das was aroused. I started collecting and studying all his writings, some of which were available in Gurmukhi script and others in Devnagri script. Finding that there was a great difference in the text of printed "versions, I tried to search some original manuscripts. I found some and even acquired one or two manuscripts but the major part of the oldest manuscripts was in the custody of Garib Dasi sadhus, They refused even to show the manuscripts for detailed studies. A glance at some of the older manuscripts shows that the compilers have taken considerable liberty in changing the forms of the original words from Punjabi or Hariyanvi to Sanskritised Hindi. I, however, collected all the printed versions and found that the older the printed version the clearer the text.

As Hindi was declared our national language and Punjabi the official language of the Punjab, research work in these languages found a great deal of encouragement. A number of excellent books appeared on the Nirgun School of Poetry and particularly on Kabir. As Garib Das was closely associated with Kabir Panth and acknowledged Kabir as his Guru, I felt inspired to prepare a thesis on Garib Das on the lines on which work had been done on Kabir and his near contemporaries.

As soon as I started working on this thesis, I realized that Garib Das was an outstanding builder of the thought and culture of Hariyana, which has formed for centuries an important region of Eastern Punjab. He was the son of this soil, the product of this culture, who added much to the thought and literature of this region. According to the inscription of Sarbal Hariyana has been called . "the heaven on earth" (Desosti Hariayanakhyah prithvijana svargasannibhahi' . Hariyana is also known as Bangar. The word means highland areas compared to the lowland area around Jamuna. Compared to the lowland area it was dry and forested.

Garib Das thus belonged to a region which has an eventful history and past but the permanent features of which are, the hardworking village community, the Hindu traditions, and pious people whose simple contented life has not changed for centuries. "There will be found in every house a bed for each grown up person, a corn-mill (Chakki), the huge pestle and mortar of wood (Ukhal and musal), a spinning wheel (Charkhi); along the wall are arranged large receptacles for grain, made of mud and called Kothi. A number of cooking vessels (which are of brass if in a Hindu house and of tin if in Musalman's) are scattered about the room, the commonest of which are the tray called thali, parat, tambiya and tastari, cooking pots tbhartiya and patili), the handi for preparing rabri and the kadhaoni for boiling milk; there will also be seen lotahs and cups (Katorah) and the iron plate for cooking cakes (tawa) will be on the hearth (Chulah); Milk is made into curd in Bharola and into ghee in balma or chum,"? Where nothing has lasted for centuries this village community with its folk-songs and folk-culture has lasted in this traditional form through all the upheavals of history. It is in such a village community that Garib Das was born and brought up. It is in such a village community that his moral and spiritual powers were fully developed. It is to such village communities that he preached his revolutionary ideas and sang his songs. 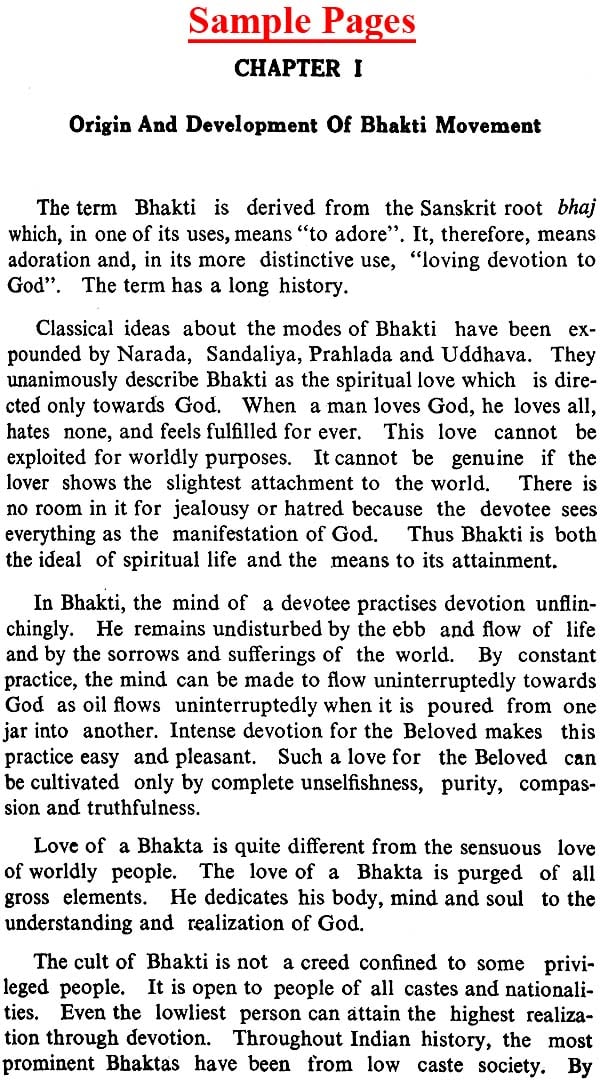 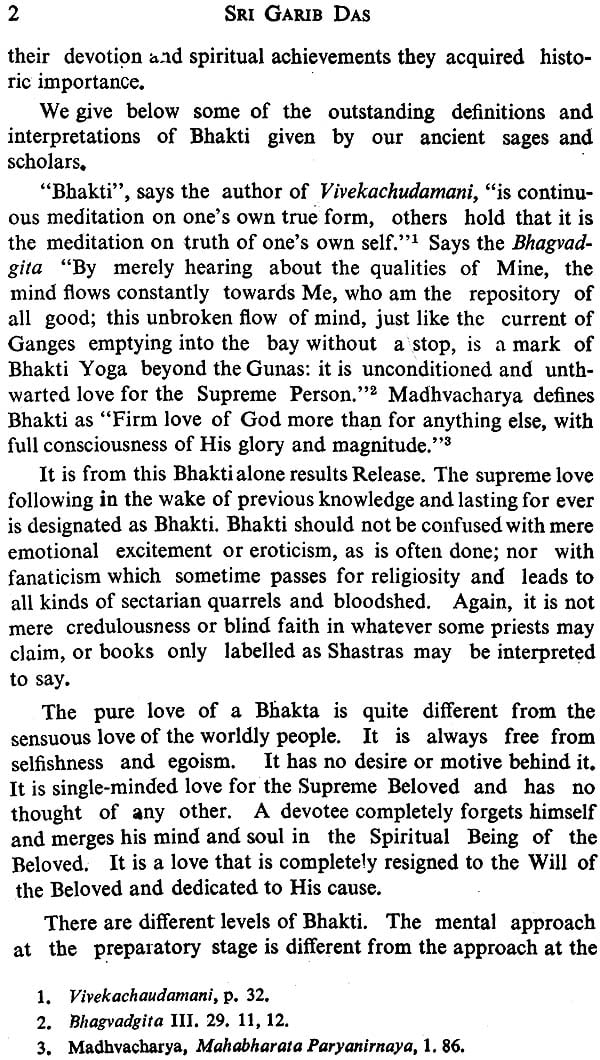 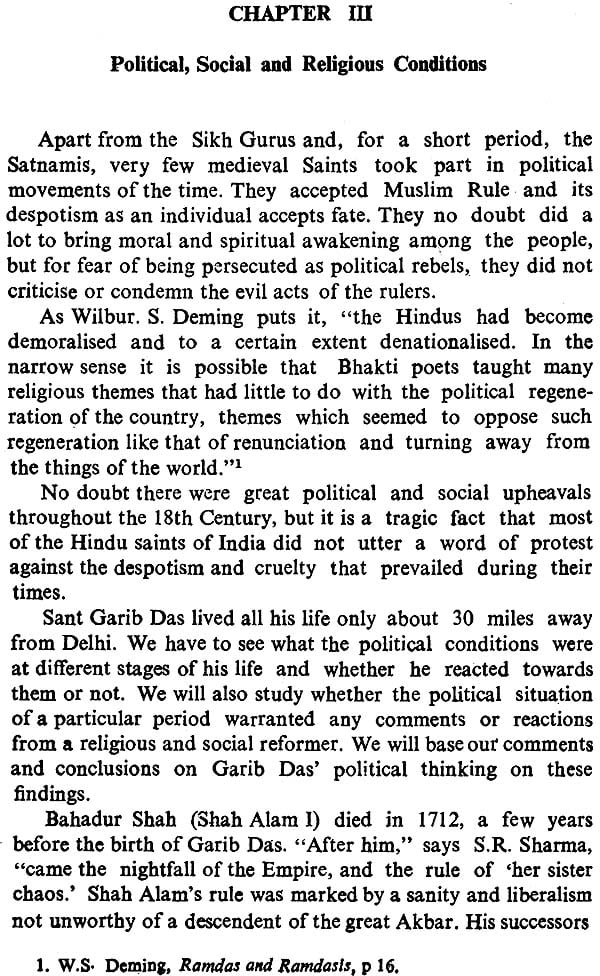 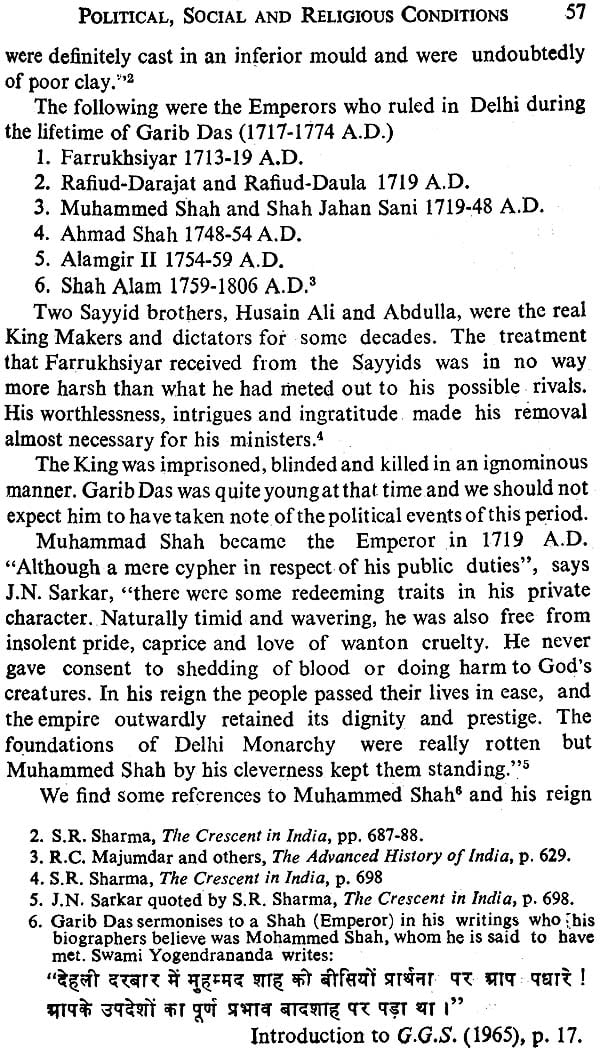 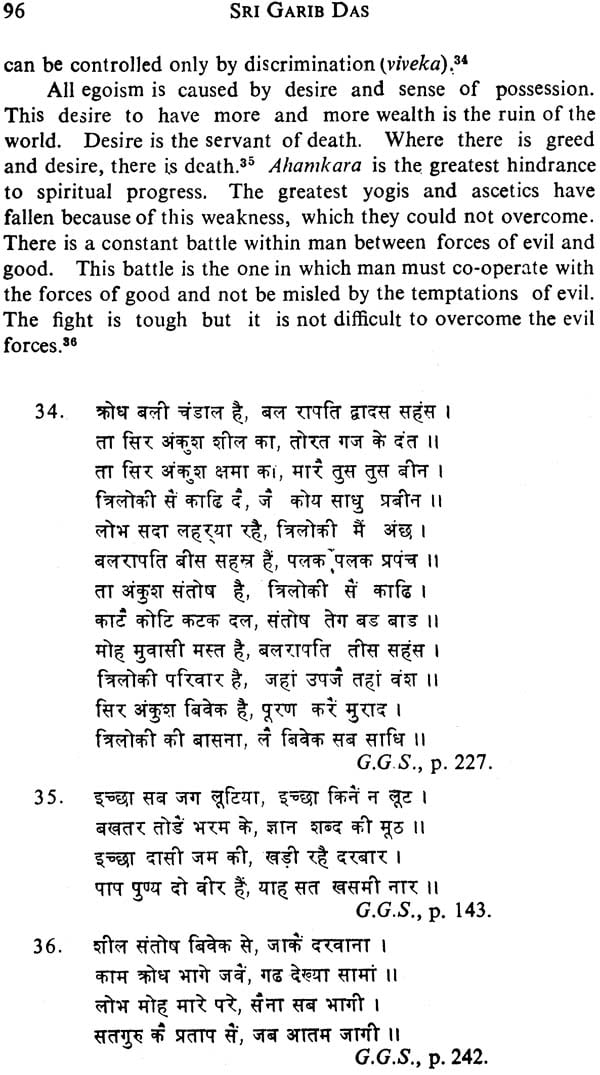 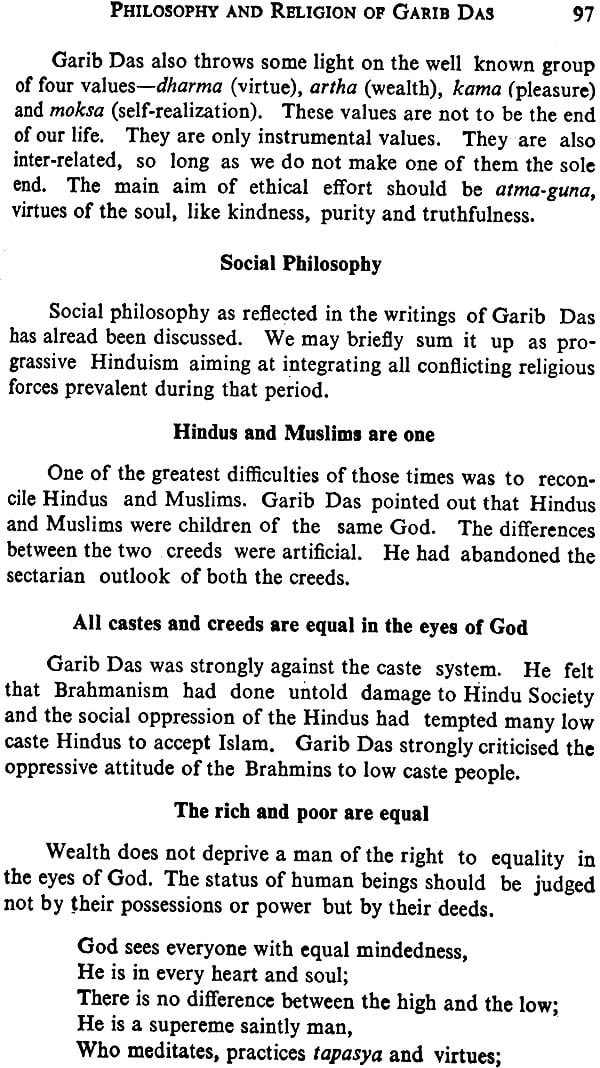 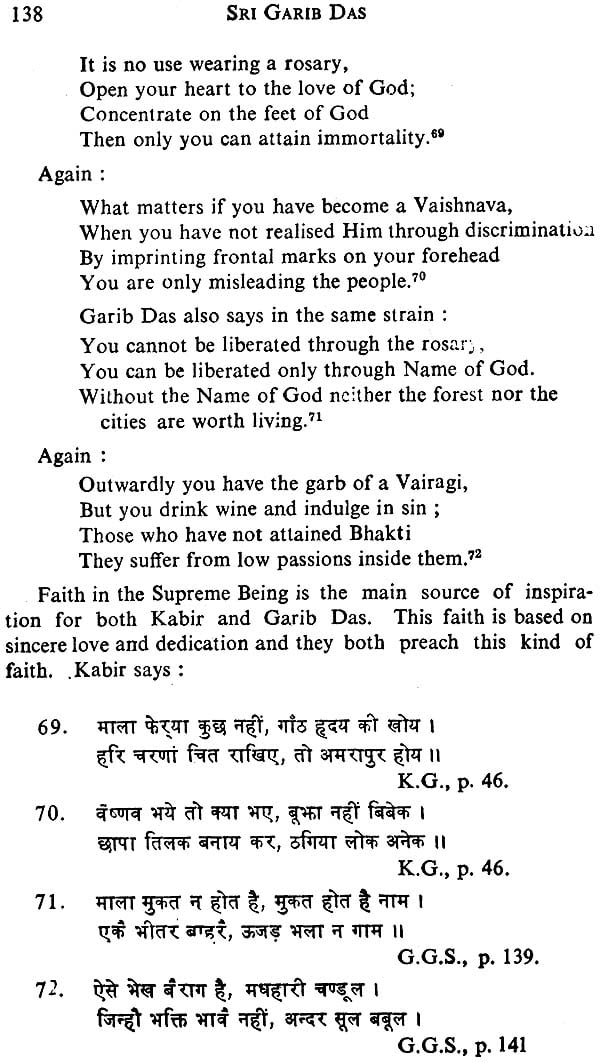 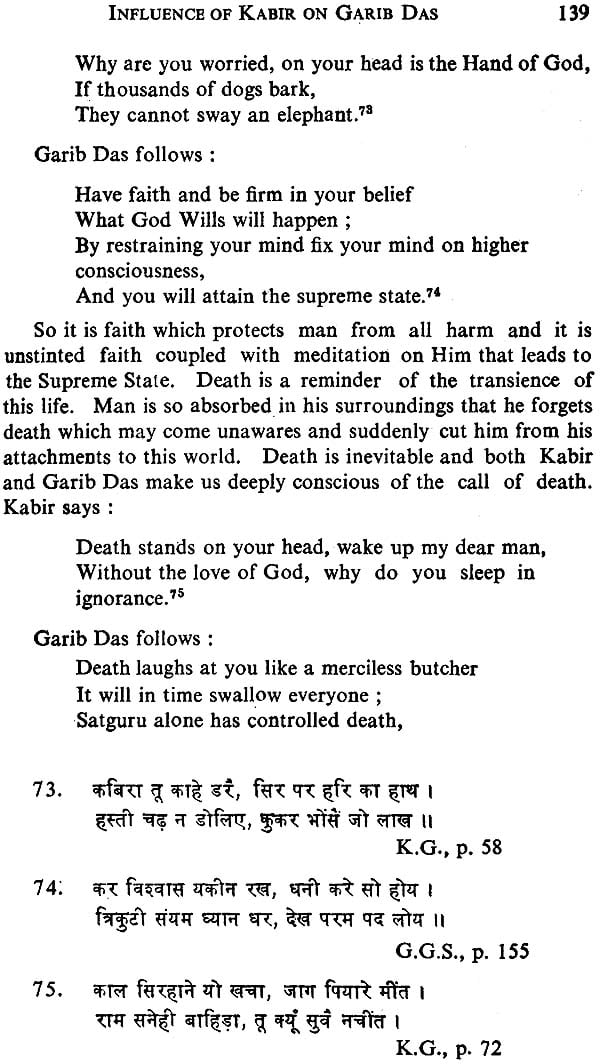 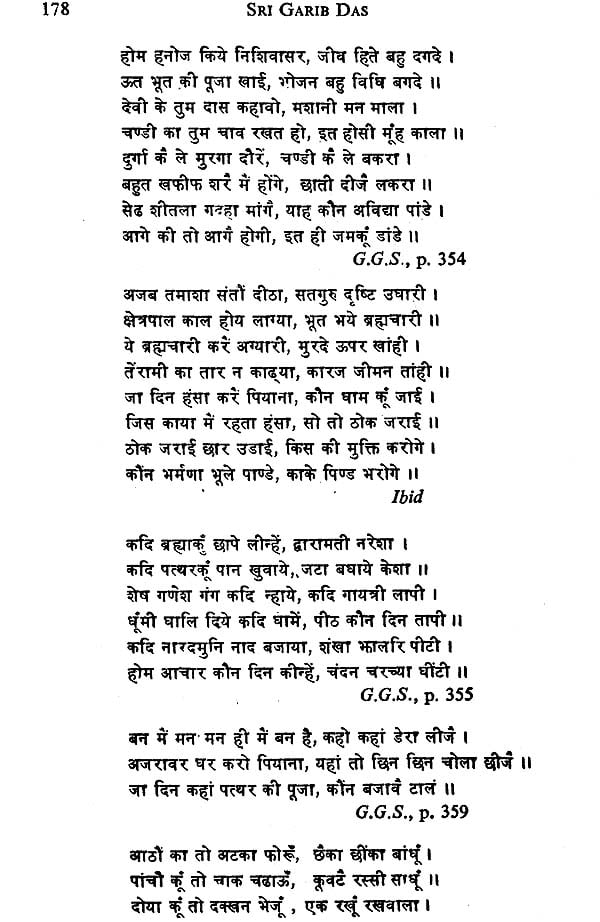 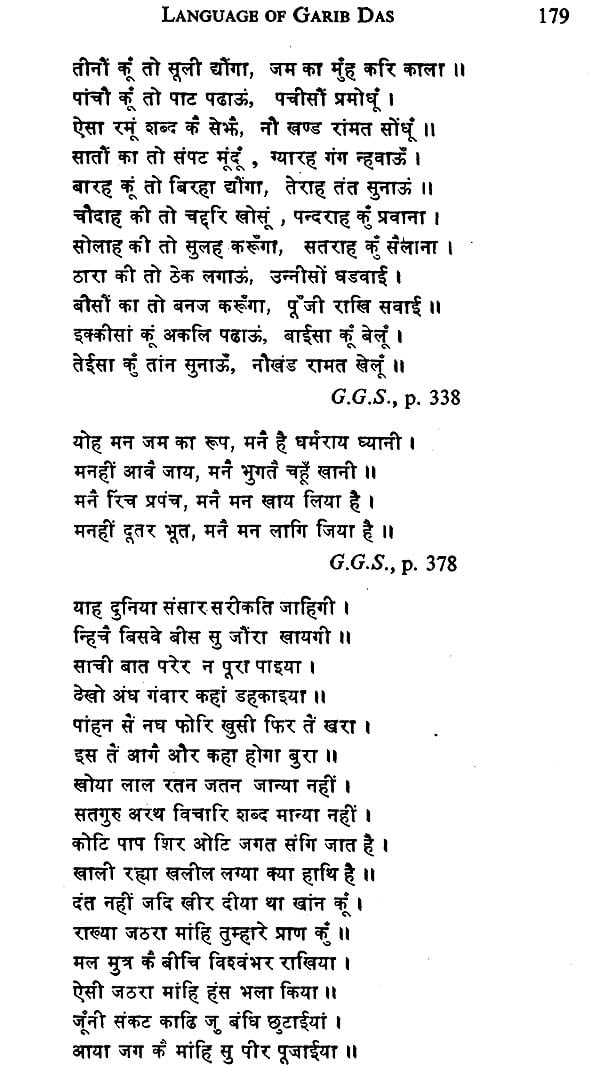 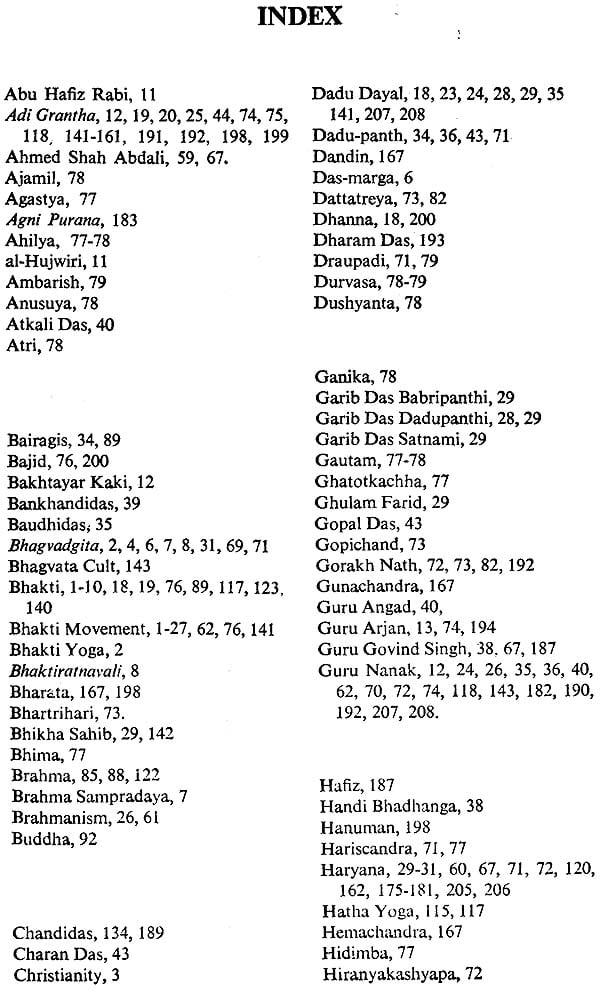 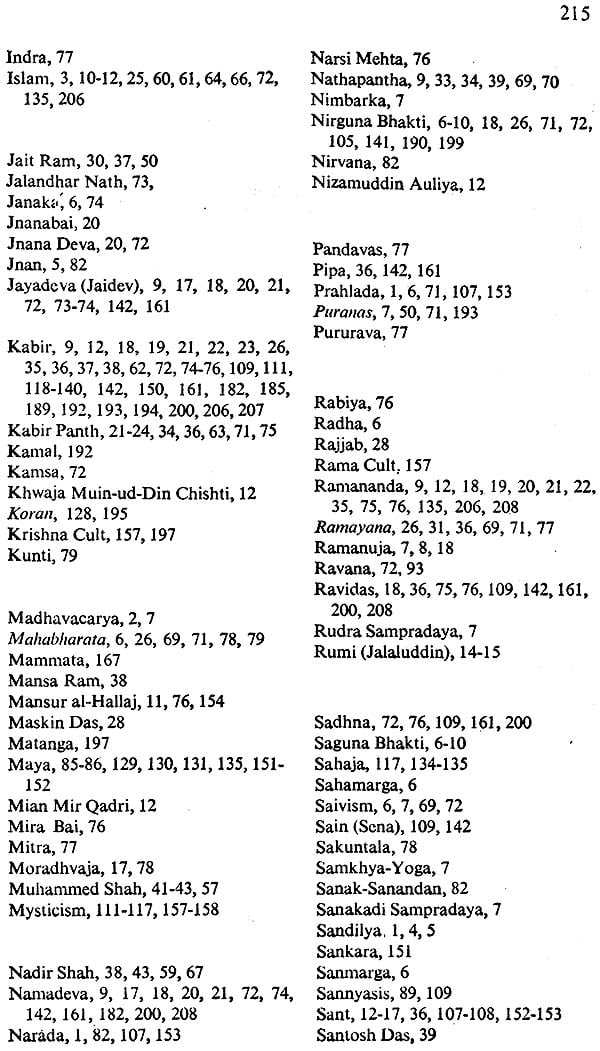 Jnaneshwar : The Founder of the Bhakti Movement in Maharashtra (Comic Book)
By Anant Pai
$13.50
Out of Stock The Chaitanya Movement (A Study of Vaishnavism in Bengal)
By Melville T. Kennedy
$24
FREE Delivery The Philosophy and Religion of Sri Caitanya (Chaitanya) (The Philosophical background of the Hare Krishna Movement)
By O.B.L KAPOOR
$39
FREE Delivery
Best Seller