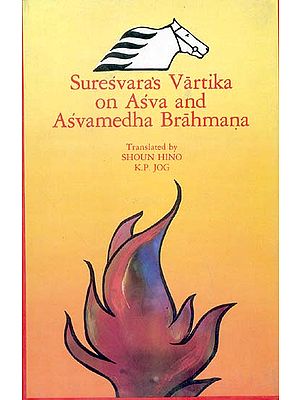 $14.50
Quantity
Ships in 1-3 days
Notify me when this item is available
About the Book:

These two Brahmanas are actually Suresvara's exposition of Sankara's Bhasya on the first chapter of the Brhadaranyakopanisad. They form a sequel to his almost independent treatise, The Sambandhavartika, wherein he has dwelt upon the doctrine that ritual is also useful to one in one's effort to attain liberation, for it purifies first the intellect and then the individual self, thereby paving way to the rise of the knowledge about the reality, i.e. to liberation. He then turns to explain ---following the Brhadaranyakopanisad itself--- how the horse sacrifice, the most prominent among the various rituals, becomes useful to one in attaining the knowledge about the reality: this on the basis of (i) the Upanisadic sentences vidyaya va karmana va and tadd haital lokajid eva and (ii) Sankara's statement that Asvamedha secures for one the reward in the attainment of the knowledge of collectivity and individuality of the one Real, viz. Atman (samastivyastiphalatva). This forms the beginning of Brahmavidya 'the lore of the Brahman'. Naturally, it begins with the explanation of transmigratory or worldly existence of an individual and the statement that the pursuit of this ritual as worship of the deity Aditya (or variously called as Agni and Arka) leads one to the knowledge of the Hiranyagarbha, the first and subtlest manifestation of the Brahman--- thus, it forms the first step of one to liberation.

Dr. K.P. Jog (M.A., Ph.D., Bombay) is a renowned Vedic scholar. He has retired as Professor of Vedic Sanskrit and General Editor of Sanskrit Dictionary Project of Deccan College of Pune. A National Lecturer in Sanskrit for the year 1984-85, he is now Director of M.M. P.V. Kane Research of the Asiatic Society of Bombay. He has edited Jayantaswamin's Vimalodayamala, a Grhya text of Asvalayana School; translated into Marathi (prose) the Meghaduta, the Virataparvan and edited Lokamanya Tilak's notes on the Brahmasutra (for Kesari Publication: Samagra Tilak). He has contributed many articles on Vedic, Vedantic, Poetical and literary topics.

Dr. Shoun Hino is Associate Professor of Gifu Pharmaceutical University, Gifu, Japan. He did his M.A. in Indian Philosophy under the guidance of both late Prof. H. Kitagawa and Prof. M. Tachikawa at the University of Nagoya in 1975. He worked for his Ph.D. under the guidance of Prof. K.P. Jog at the University of Poona. His Ph.D. dissertation entitled Suresvara's Vartika on Yajnavalkya-Maitreyl Dialogue was published in 1982. Meanwhile he has published three books in a Japanese (in collaboration) on Buddhism and Hinduism and contributed research papers in Japanese and English in leading journals of Japan and India. Besides Suresvara's philosophy, he takes interest in Hindu Samskara and Comparative Religion.

The thought of undertaking a translation of the entire Brhaddranyakopanisadbhasyavartika (Vartika) of Suresvara arose in our mind when Dr. Hino completed his translation of the dialogue of Yajnavalkya and maitreyi in the form of his Ph.D. which occurs in the Brhaddarayakopanisad in 2.4.and 4.5 consequently we began out translation of the Vartika 2.5 called Madhubrahamana since it has an inseparable connection with the topic of Dr. Hino;s work as its complement. We thus happened to begin with the ending portions of the Madhukanda which forms first two chapters of the Brhaddrayakopanisad. Now we turn to its beginning viz Vartika 1.1 and 2 called respectively asvabrahmana and asvamedhabrahamana. These two form a bridge as it were between the ritualistic and philosophical portions of the Satapathbrahmana. Also succeeding the Sambandhavartiak which fully develops the brief introductory of Sankara to his Bhasya ont eh Brhaddranyakopanisad and is more or less an independent work of Suresvara it brings out in great detail Samkara’s thought in his Bhasya on the Upanisadic text proper.

Of course it is needless to state we follow the same method of translation etc as in Dr. Hino’s dialogue of Yajnavalkya and maitreyi in the vartika and our Madhubrahama which is already published in 1988.

It is not necessary for our purpose to translate the whole of this passage here yet the substance of Sankara’s argument is generally one performs the rituals prescribed in the scriptural texts these performances by one are marked by desire. While performing these one does not consider the teachings of the Upanisads the concluding portion of the scriptures and therefore attains worldly prosperity and subsequently after death a happy abode in the heaven. As against this if one has understood the teachings of the Upanisads one’s citta is purified and then the way for the knowledge of the non dual Brahman is opened for one and this knowledge secures for one liberation.

Sankara points to the significance of the knowledge of the real viz it directly secures liberation as an alternative for performance of ritual which as stated above leads only to the purification of citta that is a step towards liberations. Even the knowledge of the asvamedha viz the awareness of the nature of the ritual and its result as some manifestation of the real and not necessarily the performance of the ritual is a means to liberation. This view of Sankara finds support in the srutis Satapathabradhamana 10.4.3.9 BU 1.3.28 and Taittriya Samhita 5.3.12.2.

This is in fact the purport of the first two Brahmanas. Yet the two Brahmanas refer respectively to (i) the draua etc amd (ii) the devata viz Agni.

They refer to the Upasana worship of the Brahman in its manifest form. Thus

(i) the first Brahmana refers tot eh Upasana of the horse and its limbs to be molested in the sacrifice and the two grahas contained in golden and silver cups called Mahima grahas.

(ii) the second Brahman refers to the Upasana of Agni.

it is then maintained that these two Upasanas which are really but one Upasan as discussed in BUBV 1.2.211-218 result into the Upasaka’s becoming one with Hiranyargarbha or Sutraman the prime sacrificer and finally being liberated form every body as stated in BUBV 1.2.219-227.

yet before coming to the conclusion of 1.2 the seer of the Upanisad has found it necessary to discuss how the common performer of an Asvamedha sacrifice dies and then becomes owing to the merit one with the Brahman owing to overpowering Maya Ignorance about the ultimate reality’, how this death is different from the common death, and how subsequently even this prime sacrificer, who will have overcome this Ignorance, becomes one with the Brahman. All this discussion necessarily implies the Satkaranavada (of Sañkara’s system of philosophy) and therefore affords Suresvara an occasion to discuss the k4razza-kärya relation between the ultimate reality and the human body which through sacrifice becomes one with that of the prime sacrificer and finally secures ultimate release from bondage, or, in other words, the resultant oneness with the formless Brahman. Again, in the course of this discussion, Suresvara has found it necessary to discuss some views, particularly the views regarding cause and effect relation, of the logicians and. followers of some of the Buddhist schools. Further, it has become necessary for him to explain how the prime sacrificer, Prajapati, is known by other names, Agni, Arka, Aditi and Mrtyu-in fact, this is the principal topic of discussion in BC, BUB and BUBV.

It is obvious from the preceding that BC and, therefore, BUBV (1.1 and 1.2) do not involve into any detailed examination of various philosophical positions. They only make certain assertions whose examination in every detail follows in later sections of the two works.

Here, a few words are necessary in connection with Suresvara’s work on BUB which is called Vartika ‘an examination of what is said, unsaid or wrongly said (in the work, viz. Bhasya, under comment)’2. In other words, a Vartika fully develops even the implied thoughts in the work (and also occasionally modifies them). In BUBV 1.2.57-64 Suresvara has felt the need for bringing out the full import of Sañkara’s comment sadrsyad anvayadarsanam na karananuvrtter iti cen na (BUB p. 21). Here ‘Sankara has omitted to give the argument of the opponent which is based on the supposition that the relation of cause and effect can only be apprehended by comparison.’3 In connection with this, Anandagiri’s comment on BUB finds a basis in Suresvara’s explanation in the BUBV. Again, Suresvara offers in BUBV 1.2.149 an etymological explanation of the name Arka, though BUB does not say anything in respect of the same. Also noteworthy is Suresvara’s comment on katham abhivyaktilingatvad abhivyaktilingam asyeti ... (BUB p. 22) in BUBV 1.2.81-87. These are examples of examination of what is unsaid in the Bhasya here he clarifies the implication in the comment by Sankara. 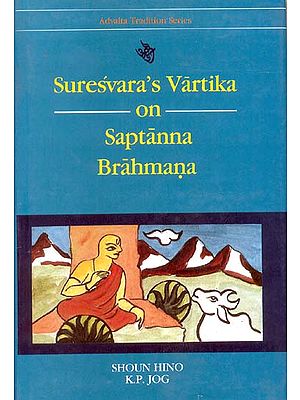 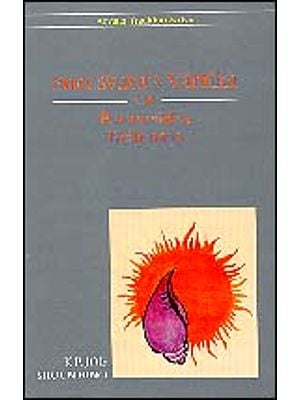 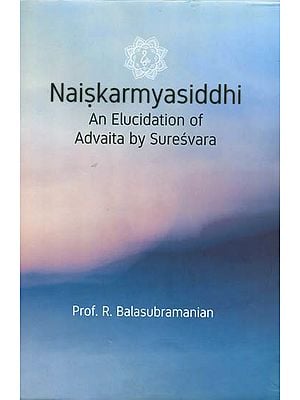 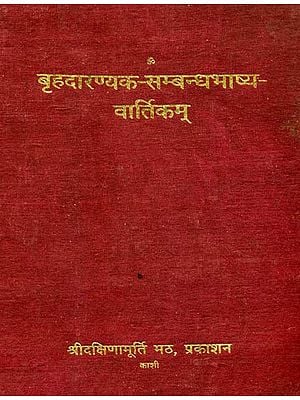 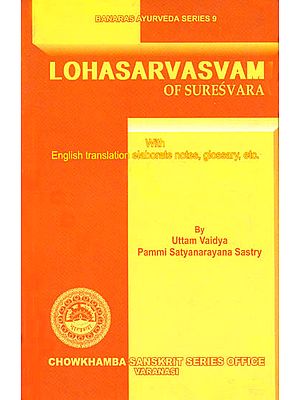 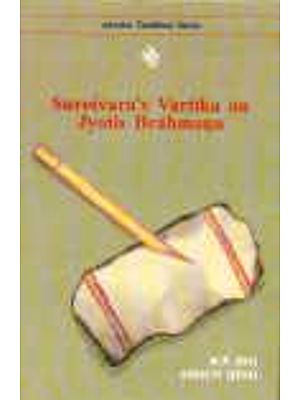 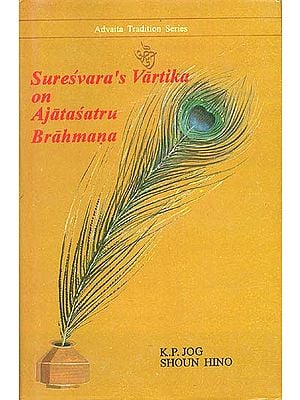 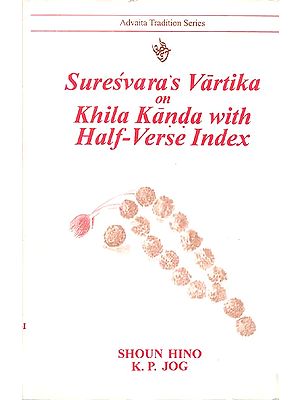 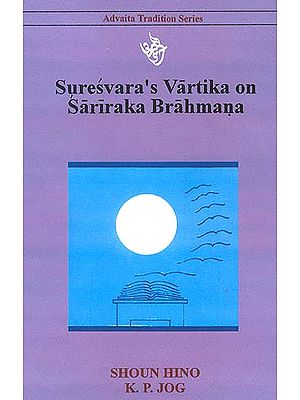