This edition of the Svapnavasavadatta is prepared on the same lines as of the other plays edited by me, being based on the printed editions of the same, the best, readings being chosen where available. In this an attempt is made to supply the University student sit a teat-book calculated to meet his usual wants. In the com., necessarily brief, are given the prose order of the slokas: the solutions of the, more difficult compounds, derivations of important words &c. The notes are meant to be exhaustive. All controversial points haye been discussed in the Intro. For ready reference a glossary of important words has been added at the end. II have consulted the editions of M. M Ganpati Sastri and Professors Bhide and Devadhar and to them my. thanks are due for whatever help I have derived from them. My thanks are due to Dr. Sukthankar, Mr. B. R. Hiwargaokar and other scholars whose articles on Bhasa were of great help to me in writing the introduction. My thanks are also due to--my friend Mr. L. S. Bhandare, B. A., S. T..C. to whom, owing to long continued ill health, I had to leave-the work of completing the Introduction written in part by me, and which he has done in a manner creditable to him. My thinks are due to D. V. Mulgaonkar Esq.„ the managing Proprietor of the firm of Messrs Gopal Narayen & Co.; Book-sellers and Publishers, but for whose patronage the book would not have seen light this year.

We shall begin with a brief outline of the general structure and arrangement of the Sanskrit Drama, as developed by the later Writers on dramaturgy. Poetry in Sanskrit, from its inherent nature, as apart from its intrinsic merit, is divided into two kinds ' what is capable of being seen or exhibited’ and ‘what can only be heard or chanted-' The drama falls under the first divison. Rupaka is the general term in Sanskrit for all dramatic compositions, which also comprises a subordinate class; called Uparupaka. The Rupaka, which has Rasa or sentiment for its substratum, is divided into ten classes, viz. Of the Uparupakas of Minor Dramas there are eighteen species, the most important of which are Natikas, such as the Ratnavali, Viddhasalabhanjika &c., Trotakas such as the Vikramorvasiya, &c.

Having thus disposed of the divisions into which the whole of the scenic art in capable of falling, we turn to the principles of divishion among the Rupakas themselves; which is threefold

1 This Section is the same as that prefixed to my ed. Of the Ratnavali with some changes and omissions.

2 The information given here has been mainly culled from the Dasarupaka.

3 Natya is another and perhaps a wider term for the drama or the dramatic art, and is so called because it represents the different situations in (the scenes presented by) life. The sage Bharata is the founder of the science of music and dramaturgy and his work is styled the Natya Sastra. Natya is also called Rupa inasmuch as it has drisyata or the capability of being seen, and Rupaka inasmuch as its subjects-matter is represented by actors assuming particular characters.

Or the plot of the play; (2) or the Hero, and (3) or the Sentiment. These three are the essential constituents, say, the very life-blood, of every dramatic piece. Each of these we shall succinctly deal with in it order.

I Vastu or The Plot

The Vastu, which is thus divided into five classes, may again be” divided into three classes according to the source of its derivation It may be borrowed from history or tradition, or it may be fictitious, or mixed i.e., partly drawn from history and partly the creation of the poet’s fancy. A Nataka belongs to the first class a Prakarana to the second.

As regards its developments a dramatic plot has five stages or conditions called Avasthas. They are (1) beginning or setting on foot of the enterprises, (2) effort, (3) prospect of success, (4) certain attainment of the desired object. While these five stages the principles and subordinate parts of thg main action (the episodes and incidents). These are called the Samdhis his or junctures. They are five in number, answering to the five Arthaprakritis, each of which they join its correspondine stage, viz, (Protasis or the opening juncture), (Epitasis). (Catastasis), (peripeteia), and (Catastrophe), also called. Thus Mukhasmdhi is the combination of the Bija and Arambha, i.e, wherein the seed is sown, so to speak, with all its Rasas. In the Pratimukha there is the means (yatna) to the chief end, as originally implied by the Bija in the Mukha which herein sprouts up. In the Garbha there is attainment and non-attainment of the desired end, implying a further sprouting up of the original Bija. There are impediments , but the main plot gains ground under resistance. The Avamarsasamdhi is that in which the seed attains a more luxuriant growth than in the Garbha, being accompanied further off fresh impediaments of various sorts, as in the Sakuntala the king’s forgetting Sak. After marriage owing to Durvasas’ curse. The Nivahana or consummation is the harmonious combination of all the aforesaid part in the final catastrophe. 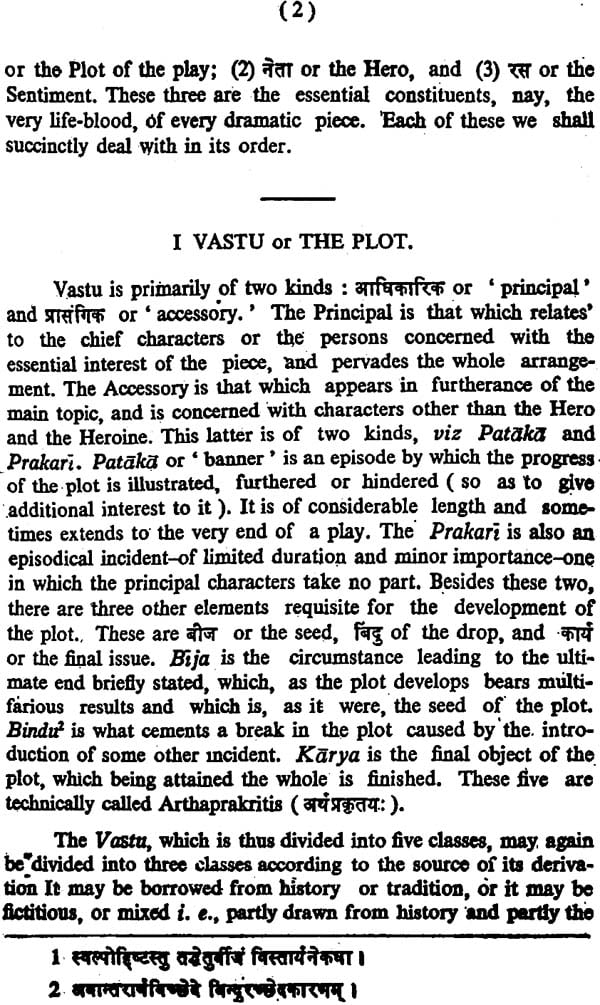 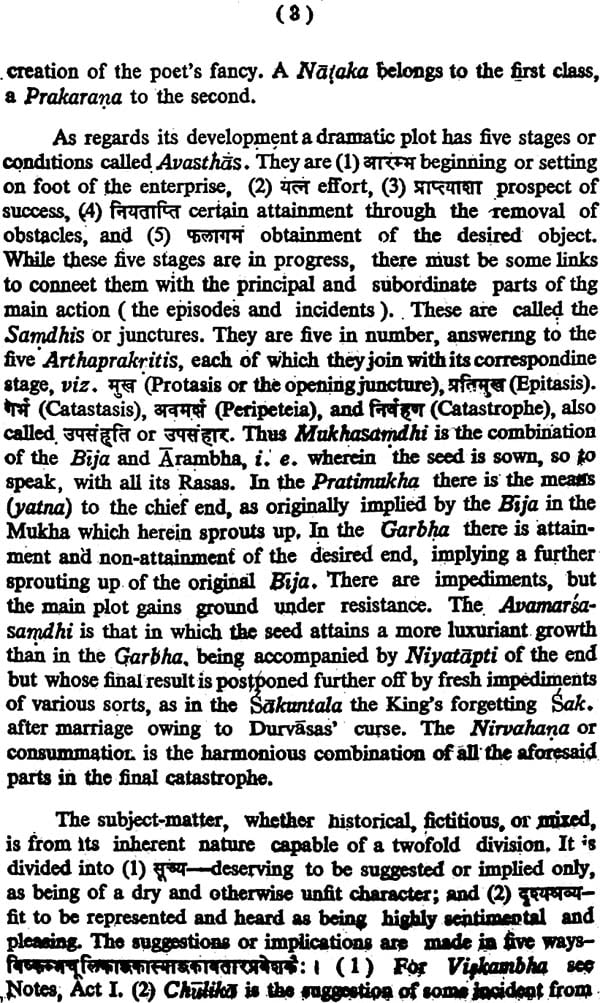 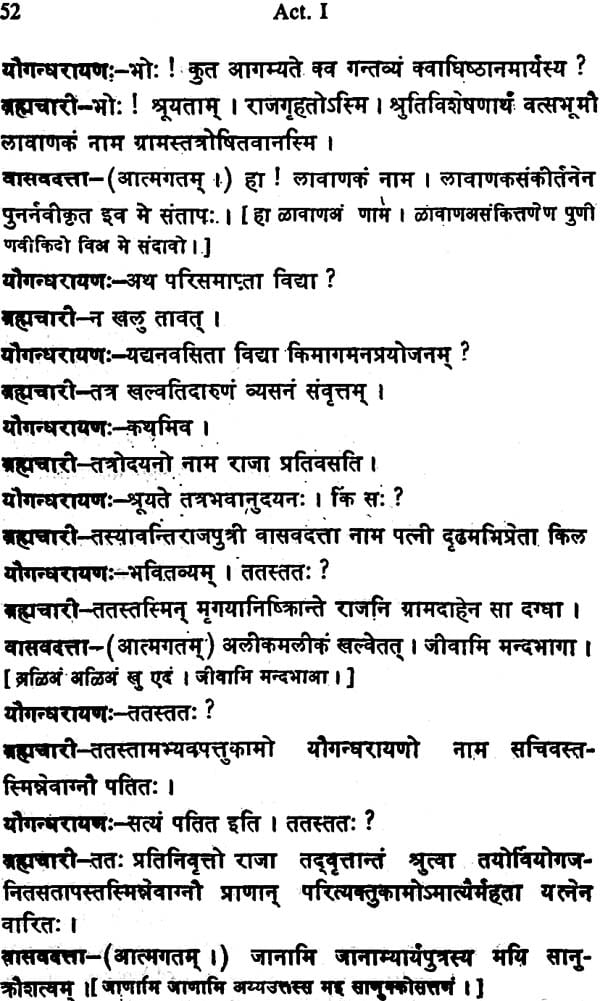 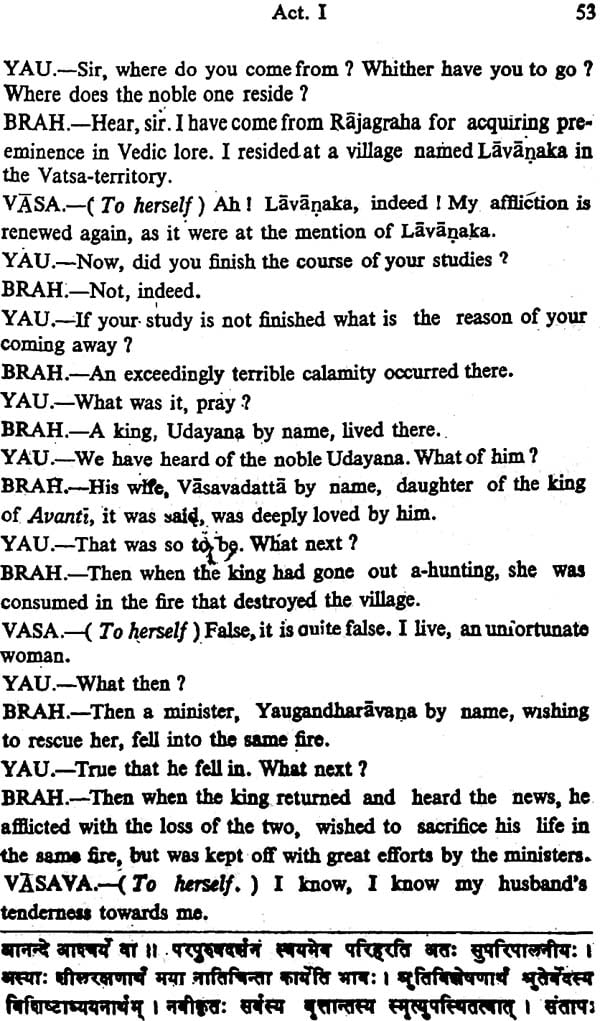 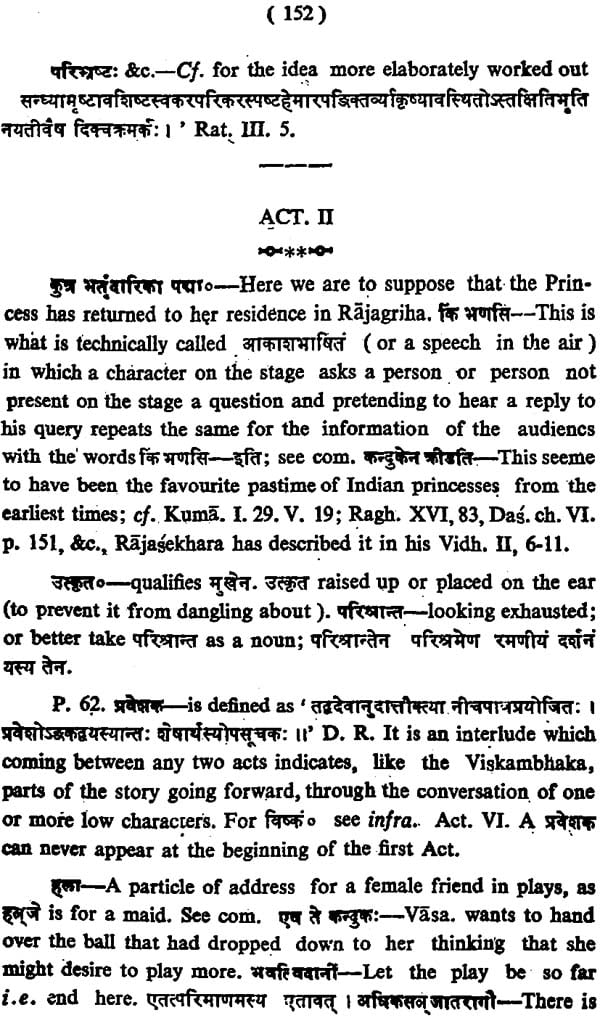 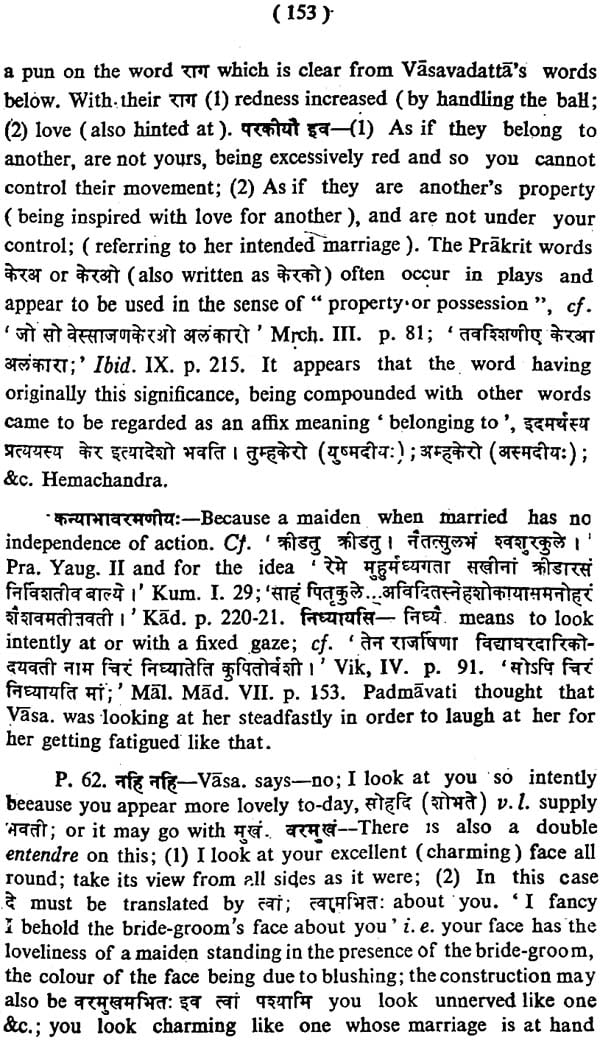