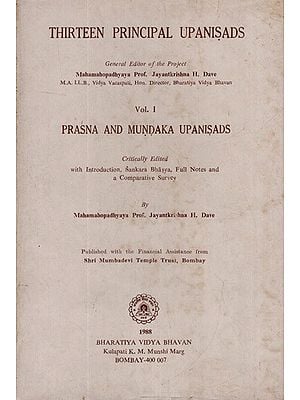 In this Project, Prof. J.H. Dave has first taken up the three Atharvaveda Upanisads — Prasna. Mundaka and Mandukya with its 215 Karikas. They are being published in two volumes, of which, apart from being the General Editor, Prof. Dave is also the contributor and writer.

In the first volume, Prasna and Mundaka are given with a fresh translation, of the text and Sankara Bhasya, full notes from Anandagiri, Sankaranand, Narayana and Acaryas of other schools and a comparative survey along with Introduction to these Upanisads and philosophies of three Acaryas, Sankara, Ramanuja and Madhya. Pranasukta of Atharvaveda is also given.

The second volume will contain the Mandukya with the Karikas and the same scheme is followed. Gist of the views of Kuranarayan (Ramanuja sampradaya) and Madhya on the first Agama Prakarana is also given. This second volume is in the Press and will be out shortly.

Prasna contains the philosophy of a single teacher, the venerable Pippalada. Mundaka is profusely cited by Sankara in Brahmasutra Bhasya, and Mandukya with Gaudapada Karikas contains the basic philosophy of Sankara's kevaladvaita.

Professor Jayantkrishna Harikrishna Dave, M.A. LL.B. Advocate (S.C.) Mahamahopadyaya, Vidya-vacaspati, is the Hon. Director of the Bharatiya Vidya Bhavan, having been associated with it since its inception. He is the author of more than 30 learned works. He was member of the Senate of the Bombay University and the Varanasi Sanskrit University. A versatile writer, a reputed scholar and leading Advocate of the Bombay Bar, he had a brilliant academic career winning many a coveted Prize. He was the Head of the Bhavan's Post-Graduate Department. He was awarded the Upadhi of Mahamahopadhyaya and Vidya-vacaspati by H.H. Dwarka Sankaracarya. He studied Sanskrit in the traditional way also. He had his legal training under Dr. K.M. Munshi and he practised law for more than fifty years. For some time he was the Chief Justice of Banswara State in Rajasthan. With his great erudition in Sanskrit and Dharmasastra he became an authority on Hindu law which he also taught for forty years. He was recognised as a Post-Graduate Professor for M.A. LL.M. and Ph.D. in Law. He was a member of the Sanskrit commission and the Maharashtra Sanskrit Samiti: Hon. General Secretary of Sanskrit Visva Parishad, Gujarati Sahitya Parishad, Editor of Bhavan's Journal (Eng.), Samarpan (Gujarati), Bharatiya Vidya (Research quarterly), Bharati (Hindi); was deputed to the World Conference of Religion and Peace at Japan in 1970; has lectured in various universities in India and USA. He has been working in an Honorary iapacity in the Bhavan for 50 years. His Amrita Mahotsava was celebrated by the Bhavan in 1984. The Bhavan has issued a felicitation volume for MM. Prof. Jayantkrishna. H. Dave's Amrita Mahotsava.

Out of the thirteen principal Upanisads, Prasna, Mundaka and Mandukya belong to the Atharvaveda which is considered to have 31 Upanisads (according to Muktika). Prasna belongs to the Brahmana section and is a kind of detailed explanation of passages in the Mundaka which forms part of the Mantra section of the Veda.

Six vedic scholars ask six different questions to sage Pippalada. The questions are interrelated and the succeeding question is the further investigation of the preceding one. The peculiarity is that six questioners are named in the beginning in a certain order but the questions asked are in the reverse order i.e. the last named person asks the first question, etc., in the reverse order.

Sage Pippalada is the editor of the Pippalada Sakha of Atharvaveda. He is referred to with the rare appellation of Bhagavan, which shows that he was not only considered as well versed in the Vedic lore but also a realised soul and therefore considered highly venerable. He was the ideal teacher to go to, being both Srotriya and Brahmanistha. Pippalada may mean eater Of fruits only i.e. practising strict austerities. He is considered the pupil of sage Devadarsa and son of the famous sage Dadhici and his wife Pratitheyi. According to puranic mythology, he performed austerities where his father Dadhi gave up his body for the good of gods and the remembrance of the name of Pippalada removes the bad effects of planet Sani! This only shows the veneration in which he was held. As the questions put to sage Pippalada are interrelated and as the answers are given by that single sage, this Upanisad contains the clear thinking and consistent philosophy of one particular Upanisadic Rsi.

In the beginning and at the end of this Upanisad there is the Santipatha invocation, "May we hear auspicious words with our ears, see auspicious sights with our eyes and live the full extent of the god-given life." This invocation positively proves that the Hindu metaphysician's thinking was not pessimistic, that it did not ignore matters pertaining to this world or an ethical way of life — the usual ill-informed criticism made against Hindu Philosophy is given a clear reply here.

In Mundaka, two kinds of Vidyas — Para and Apara are mentioned Sankara says that the first three Prasnas or sections of this Upanisad deal with Apara Vidya and the last. three deal with Para Vidya.

Sage Pippalada accepted these six Vedic scholars Sukesa and five others as his pupils. They were asked to stay in his Asrama for one year practising Sraddha, Tapas and Brahmacarya. Even though these Vedic scholars had practised Tapas etc. earlier — this was a further period of training prescribed by sage Pippalada. It was a sort of one year's rigorous training course or an entrance examination. It was not felt desirable that they on arrival put offhand, questions to the teacher. They came with humility with bundle of Samidh sticks in hand. There were no fees and they — all the six — were to stay in the teacher's Asrama for full one year. This shows that the Asrama was well provided for and apart from these six, there may be many coming to this well-known teacher and the full period of the year was to be spent in preliminary preparations and discussions. It was in the nature of Residential Training.

Sage Pippalada said he would answer their questions put to him after one year, in case he knew the answers. This shows the teacher's humility and straightforwardness.

After one year, the first question was asked by Kabandhi Katyayana "From where are all these creatures in the world born?" Pippalada replied that Prajapati performed austerities and created a couple called Rayi and Prana. The two represent Moon and Sun, food and eater, female and male, matter and life. All gross objects are Rayi. The Sun, through its rays, spreads the Pranatatva or life energy in all directions. The Sun is the Vaisvanara fire. Time represented by the year is due to the Sun and Moon. Prajapati after creating Rayi and Prana enters them; similarly He enters Sun and Moon and the year, which is also called Prajapati. The year has 2 Ayanas – north and south – they two are identified with Prana and Rayi and represent the Prajapati. Incidentally we are told that those who perform Ista and Purta and follow Karma-marga go to candraloka via Daksinayana and return to the earth, while those who perform austerities etc., and seek Atman go to the world_ of the sun by the northern Ayana and do not return to the earth. Further; the month is Prajapati and the dark and bright halves are Rayi and Prana. Similarly the night and day are Rayi and Prana. Through these representing time and seasons food is produced, from which human seed comes - semen and ovum — they create the Praja. Prajapati is immanent throughout. Reply to the question in short is – through sun and moon cycle ending in day and night, semen and ovum, people are born. Finally we are told that the highest Brahmaloka is attained by those in whom there is no wickedness, untruth or illusory behaviour.

The first question was how the living creatures are born. The reply is that it is through the first entity called Prajapati, cosmic mind – Brahma or Hiranyagarbha. He is the totality of all souls and permeates all living beings through Rayi and Prana and all their subsequent manifestations. Prana is the first born and the Upasana of Prana is recommended in the subsequent part.

The second question was asked by Vaidarbhi Bhargava "How many 'deities support these creatures? Who illumines them and who is their chief?".

In reply an anecdote is given. Akasa and others were competing with each other regarding their greatness but Prana by trying to go out proved its greatness and all others – Akasa and other elements and sense deities praised Prana, recognising its greatness. From Prasna II 5-13 are hyms in praise of Prana. This being an Atharvaveda Upanisad, it is interesting to compare this hymn with Atharvaveda Pranasukta (XI.4-1 to 26) given at another place in this book. Everything is dependent on Prana. 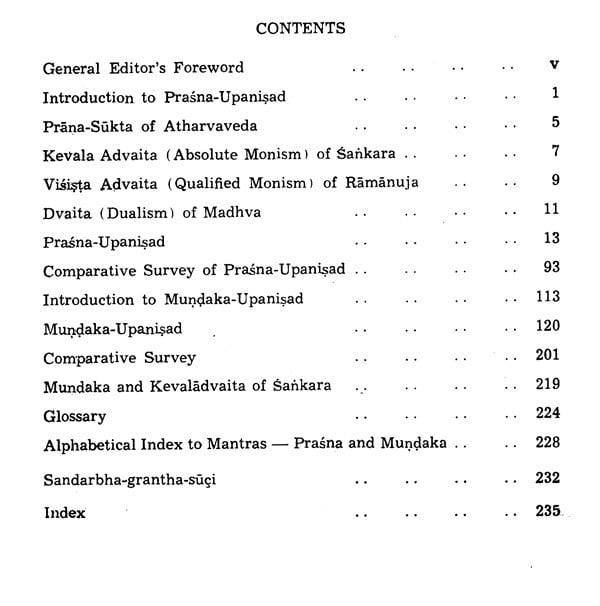 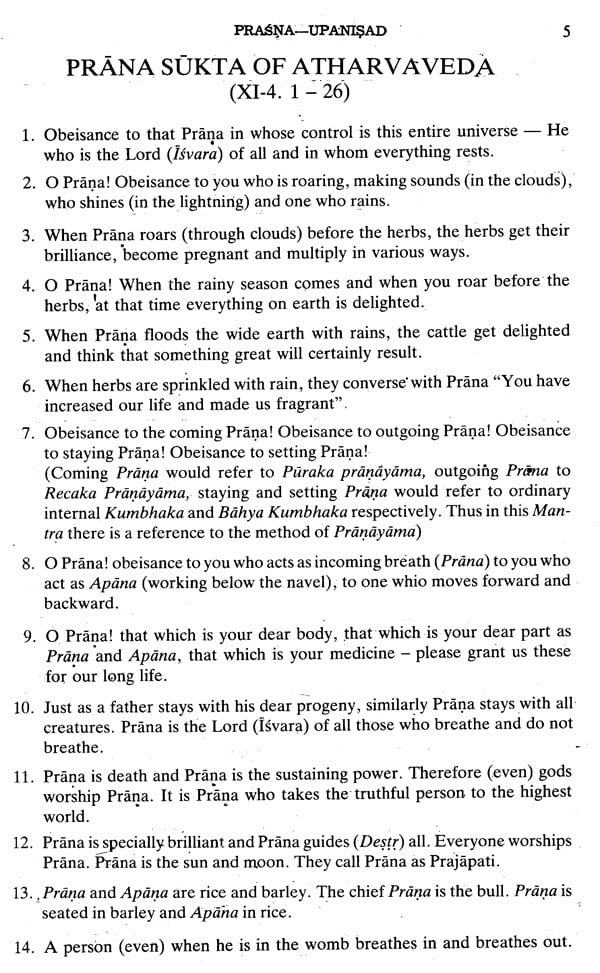 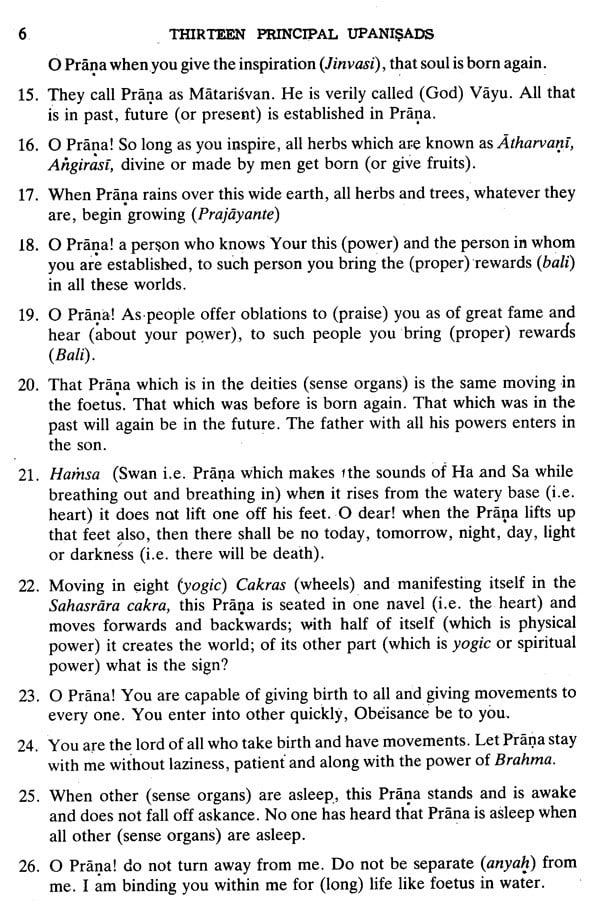 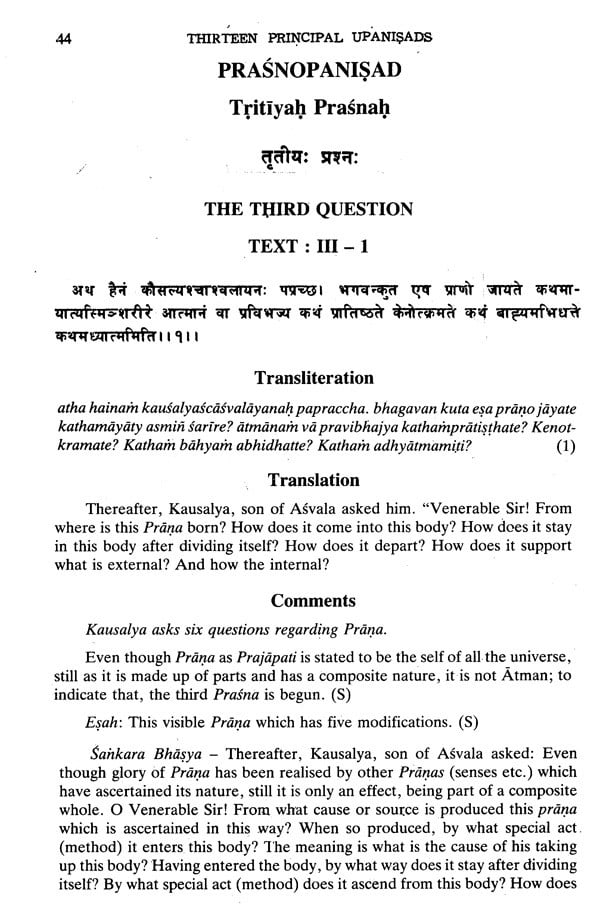 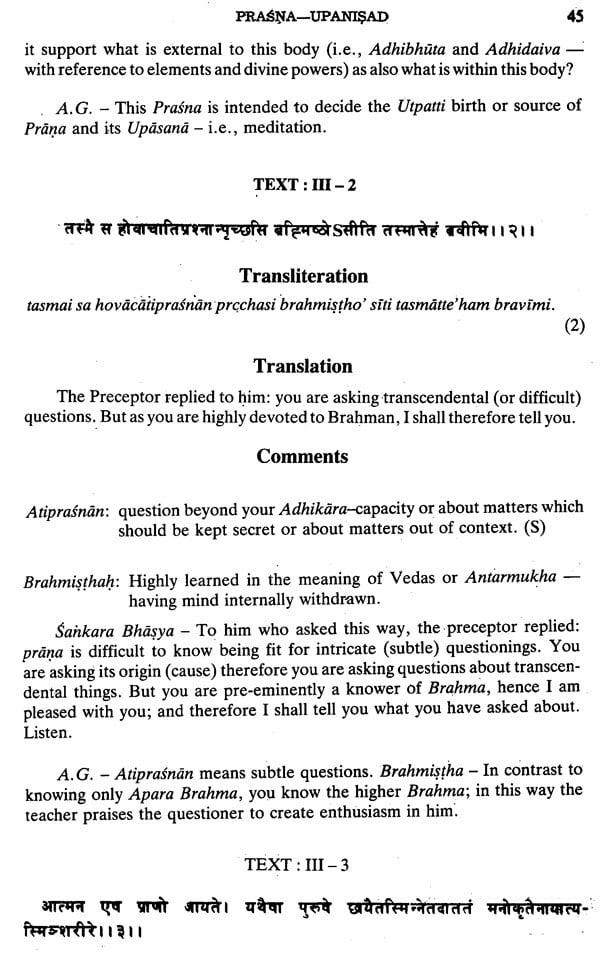 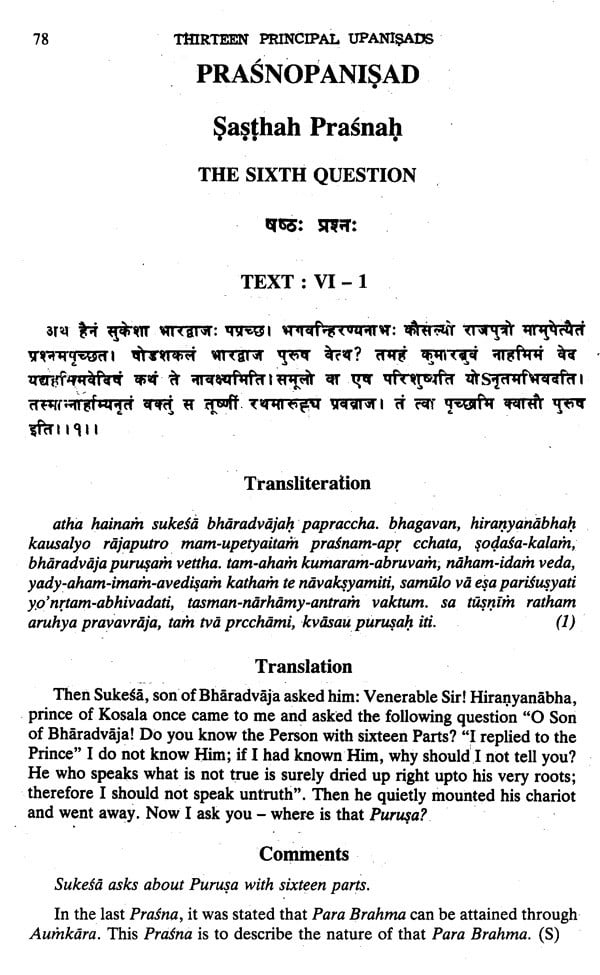 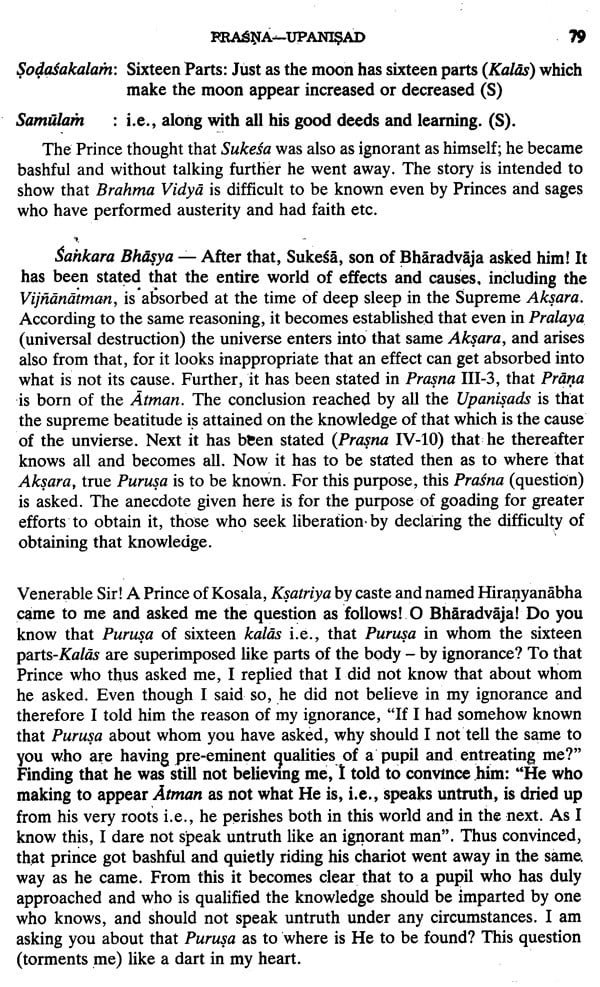 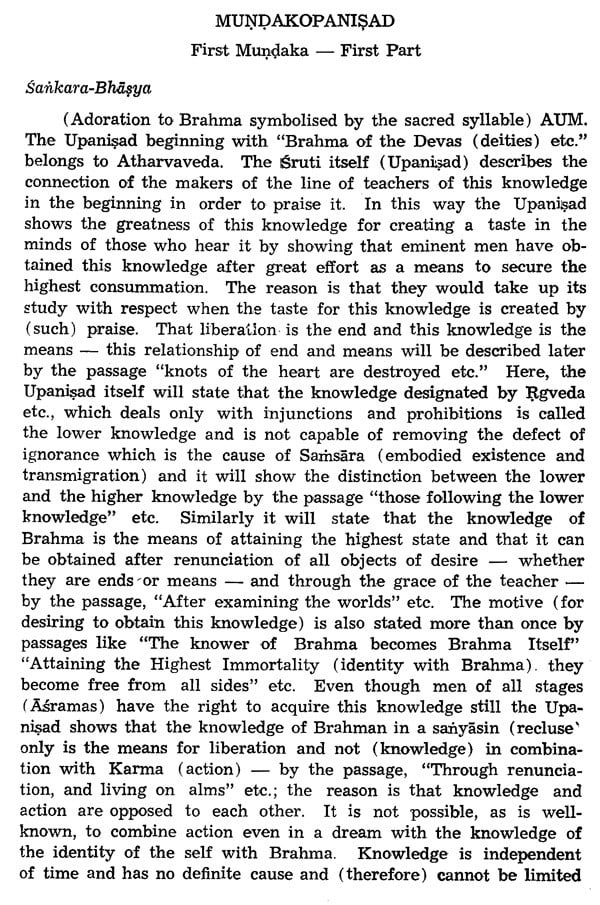 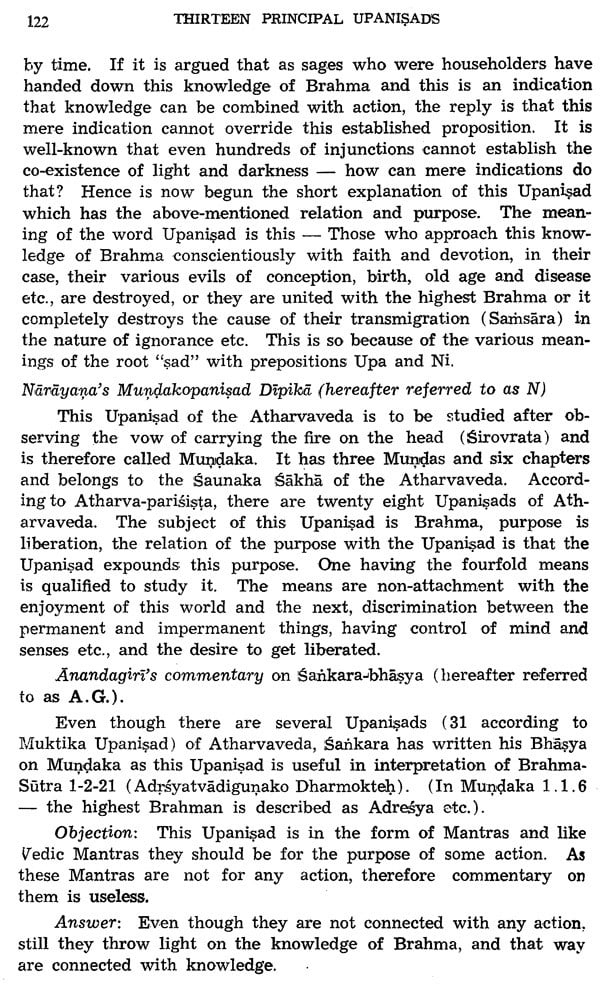