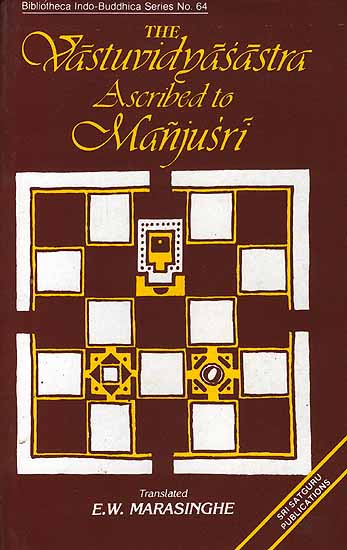 The present volume covers the first three chapters of the Manjusribhasita-Vastuvidyasastra(also called Citrakarmasastra), a unique Sanskrit Silpa text which has survived in a single manuscript discovered some years ago at the Cakkkindarama temple near Gampola, Sri Lanka. The existence of this manuscript was known to the late Prof. S Paranavitana in the 1950s, who made futile attempts to obtain it for research. Some years later, the then Director of National Archives. Paranavitana was not fortunate enough to see this precious manuscript during his life time, for the died while a photocopy of the work was being prepared for his use. The Director of National Archives then sent this photocopy to the University of Peradeniya in his search for willing editor, but no one at the University was prepared to undertake the challenging task of editing a corrupt manuscript of a work dealing with a technical subject, and it was, therefore, decided that it should be returned to the national Archives. It was this stage that the photocopy came into my hands through the good offices of Mr. Aryaratne Senadeera, then Senior Assistant Librarian (presently the Librarian), University of Peradeniya, who had been requested to send it back the National Archives.

The work containing some 1600 slokas has seventeen chapters, the first three covering almost half the work and devoted to ancient Buddhist monastic architecture and the remaining fourteen dealing with Buddhist iconography and designated as such (i.e.Cirtrakarmasastra) in their colophons. This volume covers the first part dealing with monastic architecture, edited for the first time and accompanied by a literal English translation.

Since it has not been possible to trace a second manuscript of the work anywhere in the island, the editor was left with two alternatives, one to give the text as it is and correct it by text with the original reading given in the footnotes. The second alternative has been preferred here, the translation being based on the amended text.

The manuscript written in the Sinhalese cursive script is generally legible. Some of the scribal errors in the text give one the impression that the text was dictated to the scribe by some one In the present edition the text is given in the Devanagari script for the benefit of a wider readership.

The Limit of the Editorial Work

No attempt has been made in this edition to correct all the grammatical errors occurring in the text. As almost all the Sanskrit treaties on Silpasastra are notorious for their grammatical monstrosities, absolute purity of language cannot be achieved without substantially altering the text. My attempt has, therefore, been to correct whatever scribal errors have been corrected taking care at the same time that the text is not seriously disturbed, but such instances always indicated with the corrupt version given in the footnotes.

The Manjusribhasita-Vastuvidyasastra (also called Citrakarmasastra) is the only Sanskrit silpa text of its kind that has so far been found anywhere in India or Sri Lanka. Discovered some thirty years ago in a Buddhist temple in central Sri Lanka, the work exclusively deals with ancient Buddhist monastic architecture and the art of modeling clay images of Buddhas, Bodhisattvas and others, monastery. The work which the editor assigns to the period between the 5th and the 7th century A.C. is clearly a product of the Mahayana school, which has preserved a very early silpasastra tradition that obtained among the Mahayanists of ancient Sri Lanka.

The present volume includes the first part of the work dealing with monastic architecture, together with an introduction and a literal English translation. The work discusses the ground -plans of twenty- four different types of Buddhist monastery and gives detailed accounts of the architectural features of the five kinds of major edifice, i.e., prasada, bimabalaya, bodhivesman, sabhaand of certain minor edifices. It is hoped that this volume will serve as an invaluable source book for archarologists and research workers on Mahayanic monastic architecture of ancient Sri Lanka, particularly that which is represented by the so-called pabbatta-viharas now in ruins and lying scattered on the outskirts of the city of Anuradhapura.

E. W. Marasinghe who obtained his Ph. D. from the university of Calcutta in 1971 is presently Senior Assistant Librarian of the University of Peradeniya, Sri Lanka. His first Book, The Sanskrit Theatre and Stagecraft, was published early this year (1989) under the Garib Dass Oriental Series. The Present volume is the result of more than ten years of patient and painstaking research carried out by him on a single palmleaf manuscrift of a corrupt text abounding in lacunae, scribal errors and interpolations.

All Sanskrit Silpa texts are notorious for their grammatrosities, and the present work is no exception. The editor's aim has, therefore, been to restore the original text as faithfully as 'genuine' grammatical errors.

A very methodical treatment of the modeling of images from the construction of the wooden armature to the painting of the eyes forms the subject-matter of the second half of the text. This section prefaced by an introduction will be published shortly in the same bibliotheca Indo-Buddica Series under the title Citrakarmasastra.