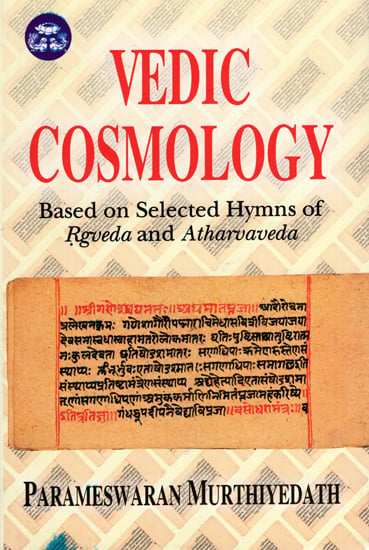 Indian concept of the creation of the universe is well presented in the Vedas - especially in the Rgveda. The present book is a unique work in which the author tries to dig out this knowledge about Mystery of the origin of the universe from the hymns of the Rgveda.

In this book, the author re-reads some of the hymns like Purusa SUktam and Nasadiya SUktam of the Rgveda to mine out valuable knowledge related to the Cosmology. He also seeks the help of Gayatri mantras and some other hymns of the Rgveda to investigate the underlying patterns of a theory of the creation of universe. In fact, he brings out the theory of the creation of the universe that occurred as a result of yazna. This book is also valuable to the Soma yajlia and the Atiratra, which are still prevalent in Kerala. He also finds close relationships between the Sulba sutra and the yajiza rituals which leads him to the underlying connection between mathematics and Rgveda.

PARAMESWARAN MURTHIYEDATH after retirement from Engineering Services developed a keen interest in the study of Indian heritage. His research in the design and historical aspects of temples of Kerala for three years resulted in a book titled Natyamandapa and Kuthampalams (to be published by Sangit Natak Akademi, New Delhi).

His other books include Yajnavedikal (In Malayalam on the geometrical aspects of Yajna in Kerala), and a School level book on the basic geometrical operations as explained in Shulbasutras (in English and Malayalam). Next he is working on an independent interpretation of the Sutras of Baudhayana, Apastamba, Manava and Katyayana.

It is well acknowledged that the Rgveda contained statements on cosmogony and cosmological matters. This volume is an interpretation of selected hymns of the Rgvedal and the Atharvaveda2 and is to enquire into the principles of cosmology contained in the selected hymns. At the same time it is an also enquiry into the nature of a Supreme Divinity, as defined by the Vedas. This interpretation would largely concern itself on the subject of the physical events that might have taken place in the course of the creation of the universe.

I had earlier scripted my own interpretation of four major gulbasutras and was pleasantly surprised to notice while handling the Vedas that many statements of the aulbasutras and their geometrical content had a strong connection with the geometry, the birth and existence of the universe, as conceived in the Vedas. I might have followed most unorthodox methods of handling the Vedic Sanskrit and I am quite sure that no pandit would ever approve of it. However, I am fairly satisfied since the physical events of creation of the universe, as described here, brought out the divine nature of such events equally well. It was straight away conceived that though my interpretation relied more on what I know of physics and the specific geometry, in each case the subject had to become a statement on the Supreme Divinity proper or the other divinities wherever found named. Actually this was not difficult as almost all of the statements had an element of divinity well attached. The Supreme Divinity of Brahma was ever relevant. But it was the other nomenclatures such as Indra, Mitra, Varuna etc. that needed careful handling. In this commentary they got presented more as physical enti-ties and phenomena, in the first instance. But the Vedic text is a very complex subject and this type of prioritizing and conclusions there-of might not be fully justified. The names of divinities in no way got underrated in this narration, even if those were not always specifically stated. What was really avoided in this interpretation was the style of rendering that ended up in common and usual benediction and prayers. The underlying thought behind this approach was that the Rgveda text with more than 10,000 verses could not come merely as such a set of prayers, but had to come constituted into some well thought of ideas and theories; whatever is their nature.

In the course of interpretations, the meanings of many words got locally formalized along with the other terms in the same verse. A concept that went deep was that no statement should arise which would be in conflict with matters already stated. Besides it was also felt that the content presented here should rely on Veda itself for meanings, clarity and verification and not on the subjects and theories of the later literature. In short, what was insisted upon was an all embracing internal consistency.

A serious impediment in following the subject narrated here would be the ability of the reader to follow the geometry of the universe described which happens to cover space and time equally. The reader should be able to appropriately conceive the necessary 2-dimensional and 3-dimensional visuals, in the absence of which the entire narration could appear either vague or meaningless. On the other hand, if that difficulty is managed, the subject would appear to be a profound set of consistent statements.

A set of brief commentaries on selected Rgveda hymns dealing with cosmology is being presented in this book. It will be found that the Vedic sages conceived the birth of the universe in majestic styles. It demands a basic knowledge of modern cosmology to admire the sophistication of thoughts that was seen to come from the Vedic sages. It is found stated that the vaidikayafria had its origin in the basic fear that man felt of the fire and he turned these into a sort of adoration. Many were satisfied with this and similar explanations and looked at the rituals with disdain. Perhaps no concerted effort, to understand more of the concepts that went into these rituals were made so that it would help to understand the Vedas better. The commentary on the hymns furnished here indeed tells altogether a different story. We can see that the Vedic sages conceived complex scientific theories fairly accurately and if so wished these could be compared to modern scientific accomplishments. The rituals that we observe to have run concurrently might have had significances that came complementary to the text and were even capable of enlivening the very text. It is known that the arigika always accompanied the vacika and at times led the way.

By methods obviously quite different from those of our times the sages were able to realise several matters of nature to a great degree of conceptual accuracy. It was possible that the system of Iruti and the yafria rituals were intelligently devised in order to perpetuate such knowledge. The Vedic sages did not entertain any illusion that this knowledge could be properly transferred to the next generation and therefore obviously devised the system of iruti to preserve the text. It could be assumed that once, when the chain of interpreters was broken, for some reason or the other, the set of theories that it specifically carried became un-redeemable. It is rather strange that the possibility of understanding the scientific meanings of the Vedic text and reconcile with it would not be much different even today than those times and that original posting was to posterity.

This interpretation of some selected hymns of the Vedic texts would be found to tend to be "physics", as we know now it. The complex definitions and the descriptions of divinity was achieved through the objects and phenomena of earthbound realities. Simple and Capable imagery was collected from the man's precincts, to describe the creation and existence of the complex universe. The terms and objects of obscure nature were avoided as much as possible. The yajfias of those times possibly consisted of such precise geometrical patterns and matching dramatic presentations as were required to communicate effectively.

The Rgveda would appear unique in many ways. It appeared to be poetry, odes to a Supreme Divinity and at the same time, science. There appeared a general lack of emotions in the descriptions of the text. It did not express fear or extreme reverence. It kept away from happiness, angel' and sadness. Even while describing the horrendous occurrences and wolfish behaviour it maintained equanimity. It however admired nature in great measures and contained apparently consoling words to man and declared that it was a universe of all excellence, calm and quietude. In this respect the Rgveda is much different from the literature on philosophy and rituals of the later times. It described the growth of the universe as from heaven till this earth, not because the earth was the, fluter limit, but for the reason that the perceiver was stationed at the earth. 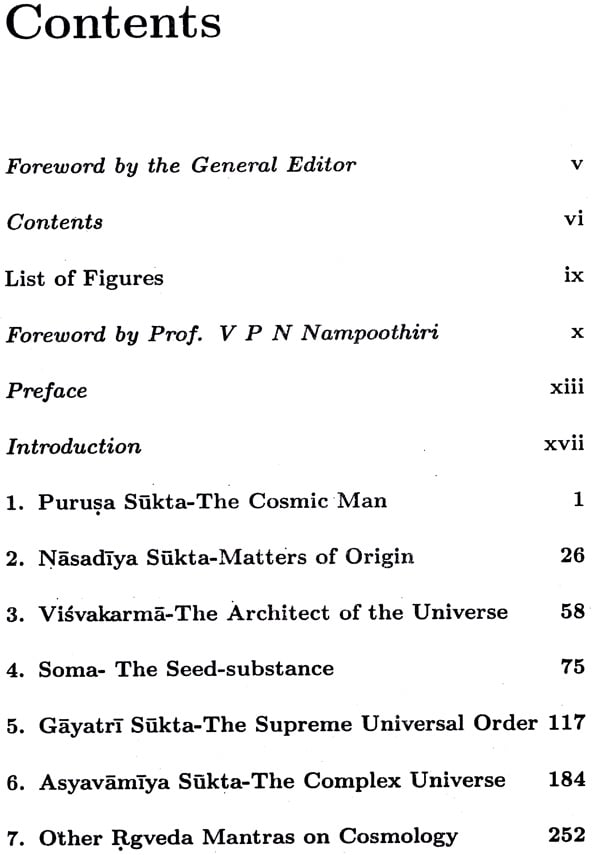 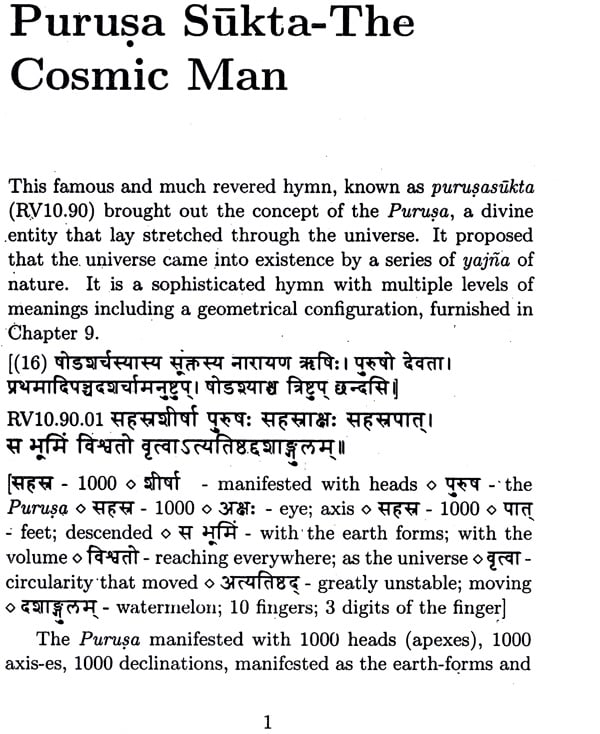 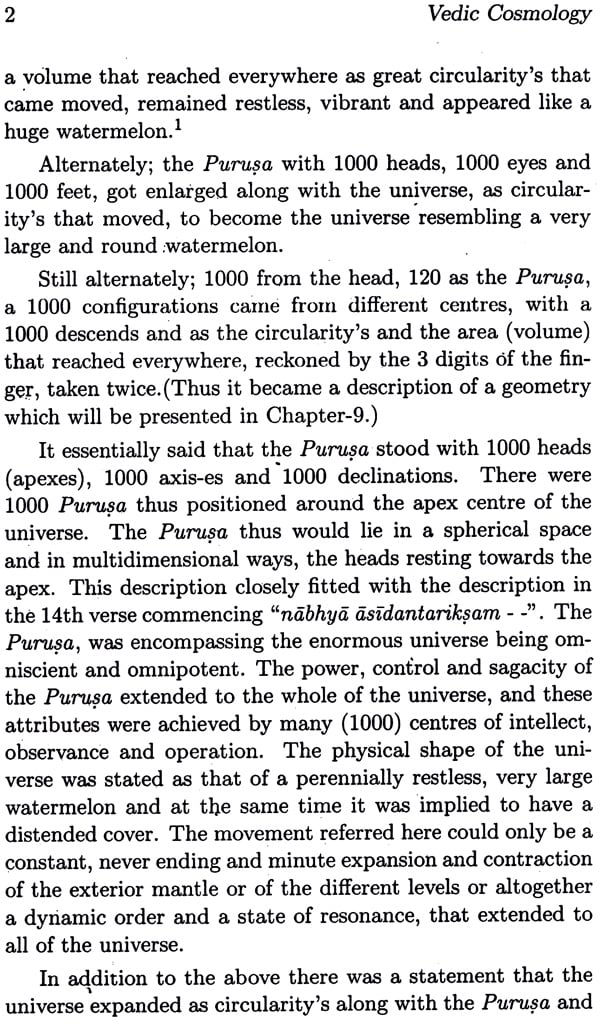 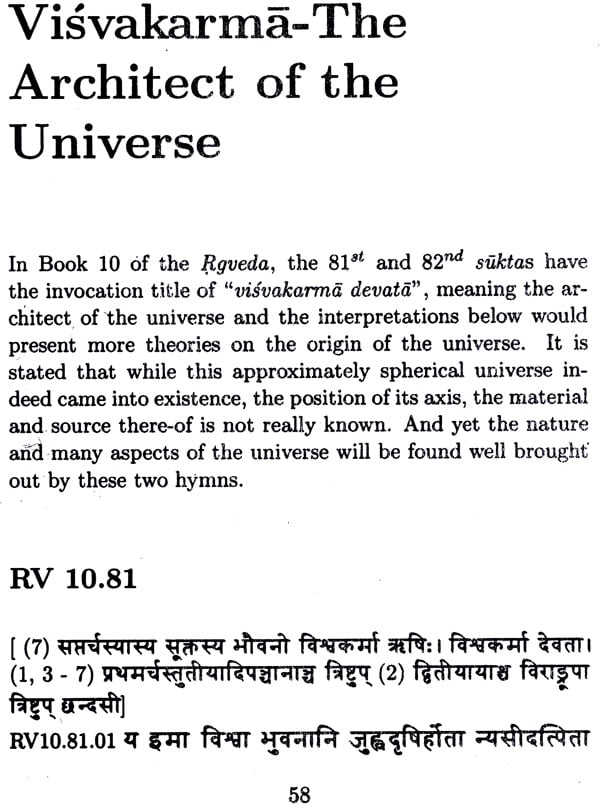 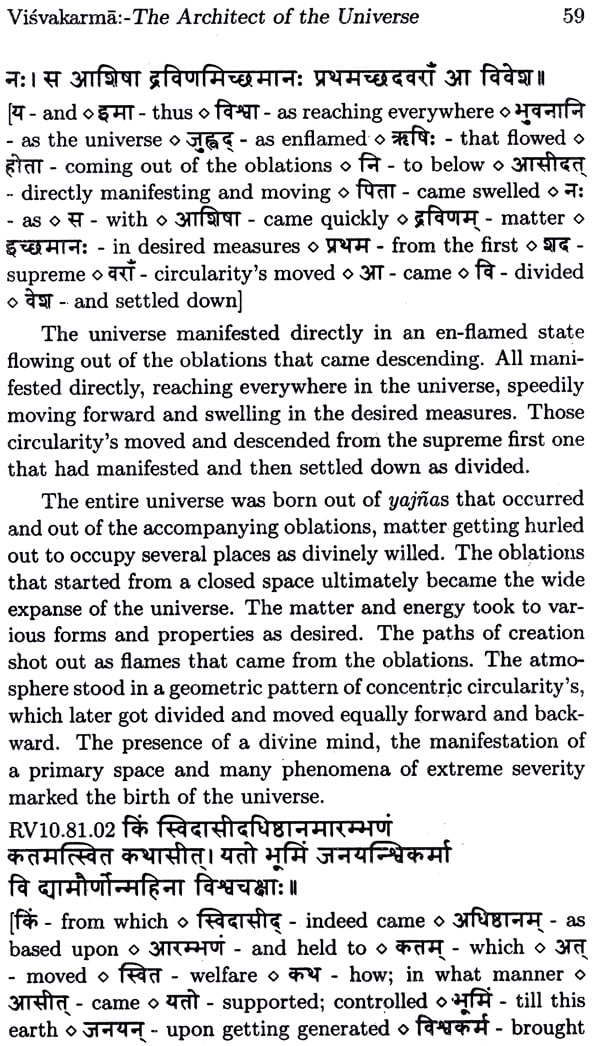 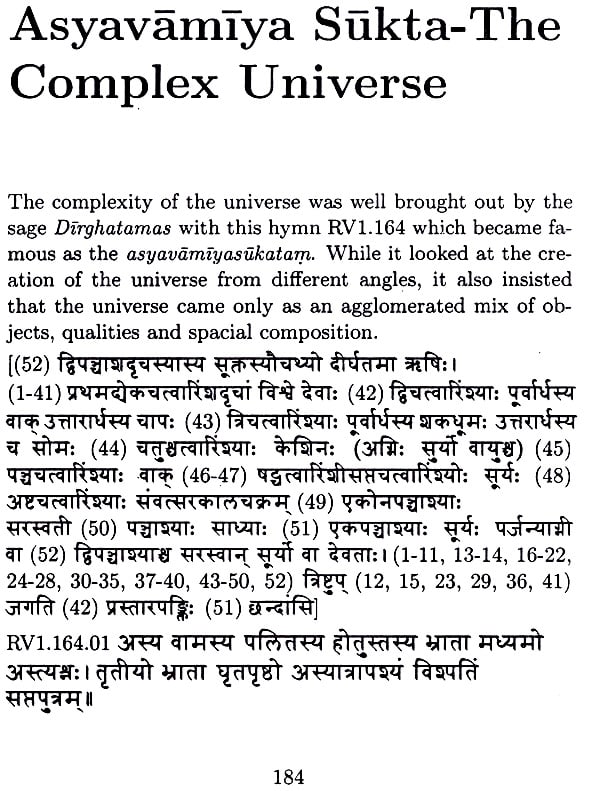 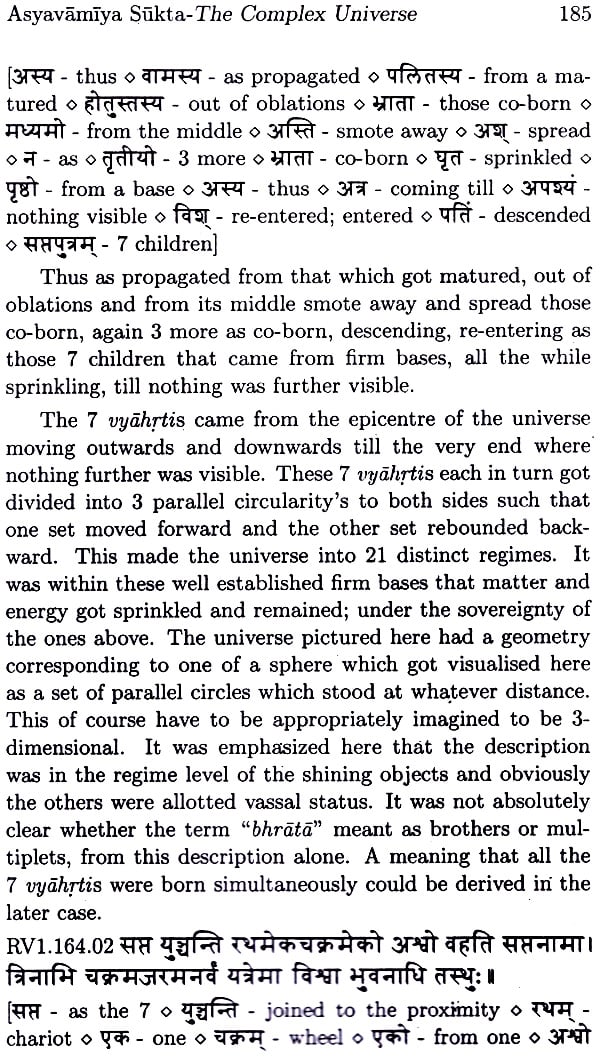 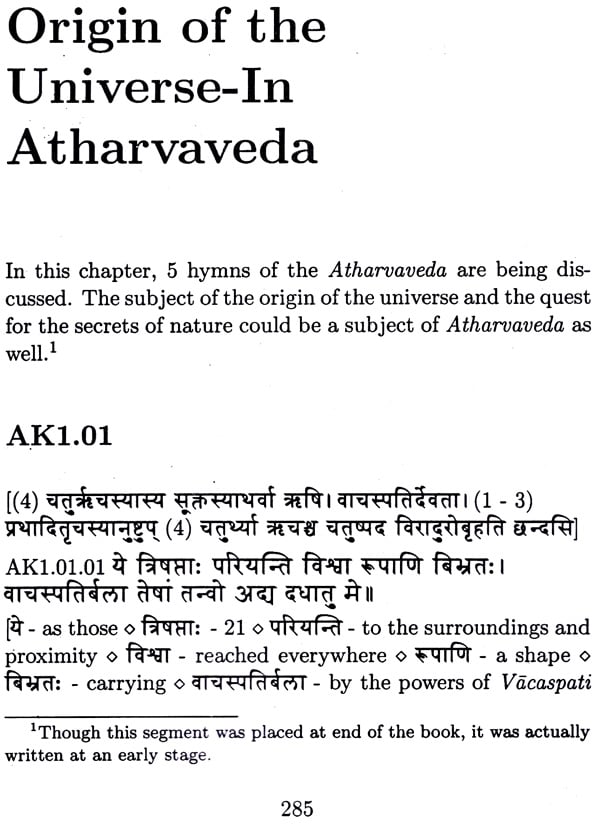 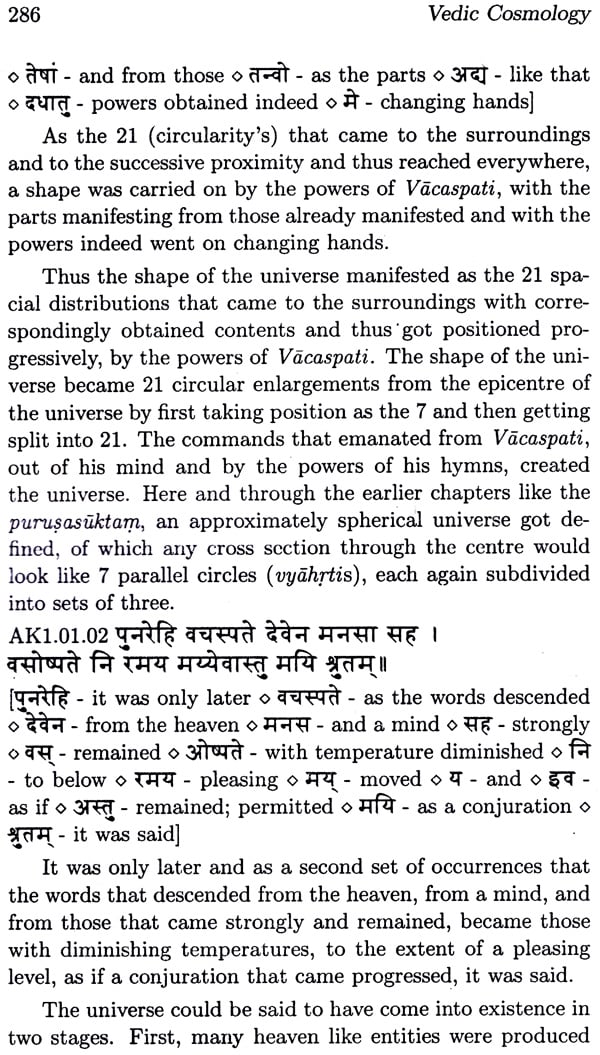 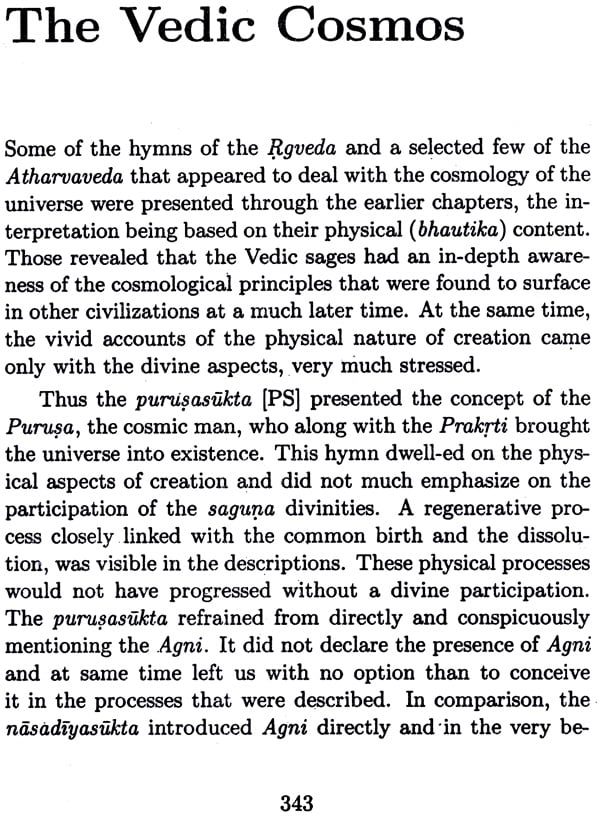 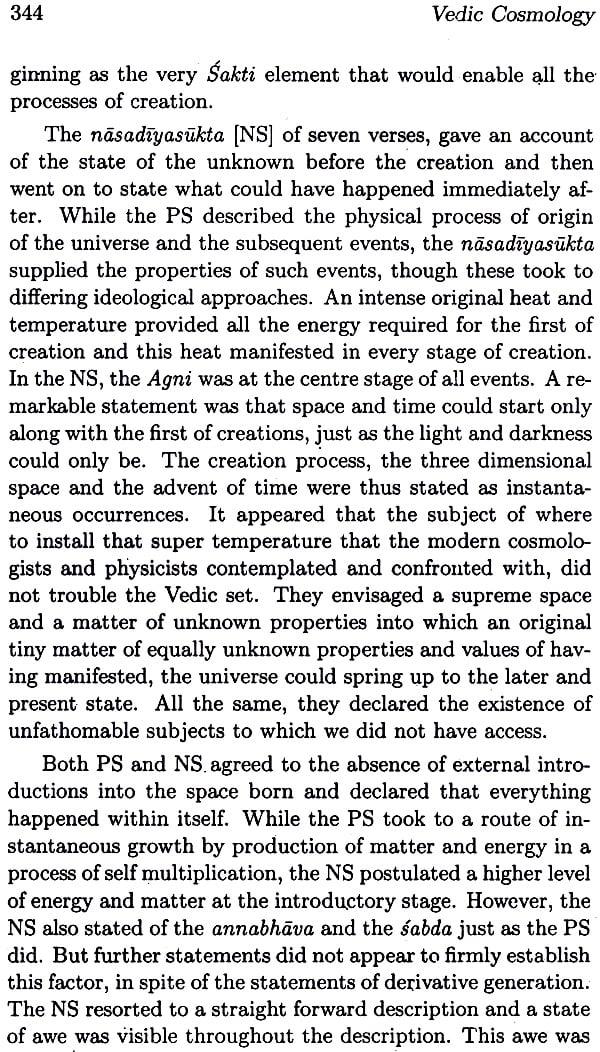 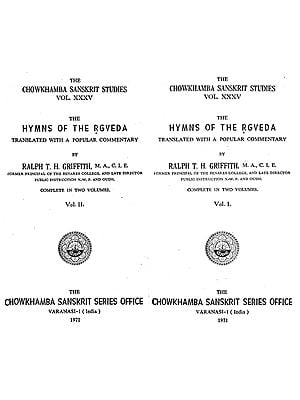 The Ancillary Literature of The Atharva-Veda (A Study with Special Reference to The Parisistas)
By B.R. Modak
$30.75
FREE Delivery
Best Seller
$41  (25% off) 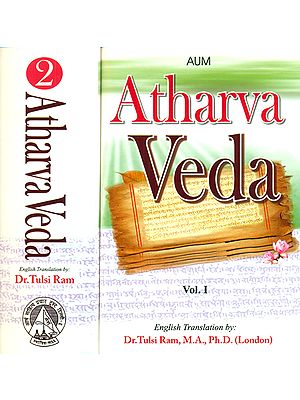 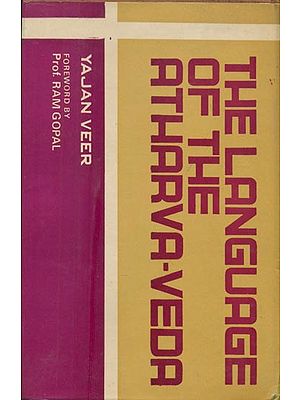 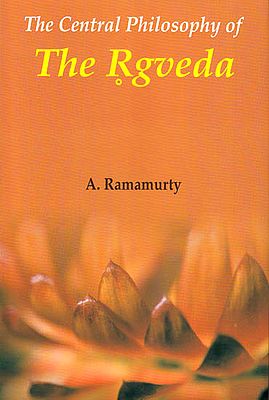 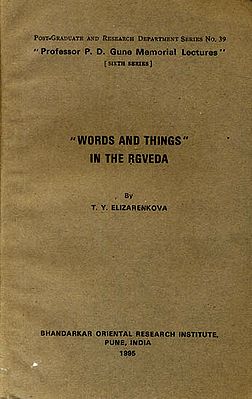 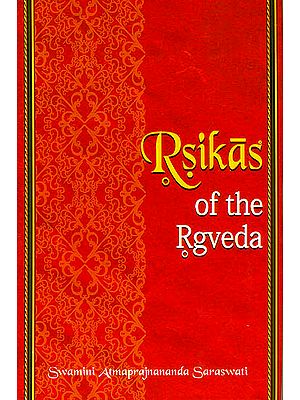 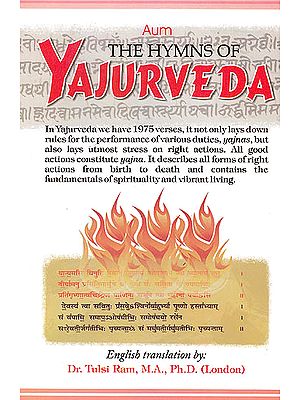 The Hymns of Yajurveda (With Sanskrit Text, Roman Transliteration and English Translation)
By Dr. Tulsi Ram
$41.25
FREE Delivery
Best Seller
$55  (25% off)
Add a review
Have A Question