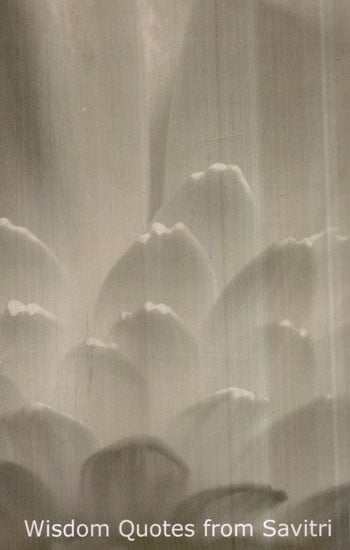 It may not be a wise proposition to speak of Wisdom Quotes based on Sri Aurobindo's epic Savitri. Certainly it cannot be in any conventional or conformist sense. This is particularly important when we recognize that his Savitri is a supreme revelation, is a presentation of his epochal realizations, that it is a Yogi-Poet's luminous vision and work, that it embodies in itself the abounding omniscient Word coming from some high transcendental Source. Therefore to reduce or present Savitri in terms of quotes could easily amount to its trivialization. There is a danger in it. Yet there are on occasions wonderful crimson seeds of exceptional quality and distinction which stand out in their flowering possibilities to give rise to new life and zest and pursuit, of truth and beauty, as much as of power and light and joy. This could be encouraging to us.

We have attempted here a selection in the manner of aphoristic quotations, of single-lines, unrhymed couplets and quatrains or stanzas. No doubt, in the poem these occur naturally in their substantial richnesses, exist with their vivid textual background and relevance, in their respective fitting contexts; isolating them from it might therefore appear somewhat unusual or atypical if not weird. Yet they do carry in them a firm and forceful universality which is context-free, which is what aphorismós is. In the present work these have been put in the running sequence as they appear in the main body of the poem. It must also be pointed out that there are quite a number of lines or passages of various lengths which could have been valuably included in any proper representative book of quotations; however, this is generally ruled out because of the indicative pronominal references in them which do not easily lend themselves to form a part of an unbounded set. Here are some examples illustrating their character:

In atomic parcellings of the Infinite

Near to the dumb beginnings of lost Self,

He felt the curious small futility

When all thy work in human time is done,

The mind of earth shall be a home of light,

The life of earth a tree growing towards heaven,

But where the silence of the gods had passed,

A greater harmony from the stillness born

The splendour of some bright eternity

Threatened with this faint beam of wandering Truth

Who seekst the deity thou keepest hid

And livest by the Truth thou hast not known,

The Enigma ceased that rules our nature’s night,

The covering Nescience was unmasked and slain;

Its mind of error was stripped off from things

There are in these stanzas pithy concise statements with their universal implications. Thus in "O human copy and disguise of God,/Follow the world's winding highway to its source" is full of desirable instructions and can be a good guide to shape one's life and movement in its truth. But that would be another matter. Here our aim is, apart from for one or two exceptions, to go in the strictness of the original text. In the same vein one could also speak of the exclusion of other sets of passages, of three or six or eight lines, for instance. Take the following octave as an example.

Hard is it to persuade earth-nature’s change;

It fears the pure divine intolerance

Of that assault of ether and of fire;

It murmurs at its sorrowless happiness,

Almost with hate repels the light it brings;

It trembles at its naked power of Truth

But this is more like a narrative than an aphorism though it has "distinction" and "definition". Yet one could have made a prose statement out of it: "It is hard to persuade earth-nature's change; even as our mortality bears ill the eternal's touch it fears the pure divine intolerance, that assault of ether and of fire; it murmurs at its sorrowless happiness, and almost with hate repels the light it brings; it trembles at the naked power of Truth and the might and sweetness of its absolute Voice." But that would mean another kind of presentation which could be a very valid way of looking at Savitri. Paraphrasing passages in this manner could give more freedom and take away the pronominal restriction which is otherwise there in the strict textual selection.

But why Wisdom Quotes? Certainly the purpose is not to bring out a Handbook of Sententia and Advices. It is neither the intention of presenting a particular culture with its society and heroes, nor in the nature of the sayings of traditional sages such as Seven Sages of Greece, or Confucius, or King Solomon. It has to also go beyond the Aristotelian ethics and philosophy. It is simply not happiness or welfare or Eudaimonia that we are seeking through them. Nor are these quotes meant to be sutras or short formulae as memory aids. It has to steer clear of religious formulations. Surely, there is a lot of content in the proverb "Evil exists because God gave Lucifer a free will. God gave him privilege and freedom, and he used it to rebel against his Creator", or in "Adam chose the curse of sin for his family over Paradise with God". Even an aphorism of Sri Aurobindo on Love and Force cannot come in the category we are considering: "When all is said, Love and Force together can save the world eventually, but not Love only or Force only. Therefore Christ had to look forward to a second advent and Mahomed's religion, where it is not stagnant, looks forward through the Imam to a Mehdi." But this sounds more like a terse thought assessing the work of an Avatar and a Prophet. This certainly is a luminous commentary, but the soul of the poetry resides elsewhere. We are looking for the creative eye of Eternity. With it could be discovered the charged Word, the immortal Word, that we "grow vessels of creative might"; we have to discover the secret creative fire, the ardour of creative joy.

This creative joy can flow in countless directions, this intense creative fire blaze with many tongues. That could be the greatness of each quotation presented here. Take the very first one: It was the hour before the Gods awake. There are already so many things in this amazing opening line itself, in terms of deep thought, in terms of spiritual metaphysics, in terms of poetry, epic poetry, literature. In it could be read the story of creation, it tells how the divine opposites came into existence, all that with a purpose, everything summed up in "It was the hour before the Gods awake." To quote a comment: "It has the sense of a poetic rendering of a fact, of the kind that could be noted by an observer, rather affirmed, but with many a mystic dimensions. First being that Time is not experienced upon as the moments or shadowed as the past or even divined as possible future but rather perceived with trikāladŗşti as 'dots upon a page'. It is to be noted that the declaration in the opening line is not of the type of a vision, or even of the kind of a revelatory promise, but of the kind of an imminent realization. And that it would be the fulfilment of the Promise made by the Supreme to his labouring Force. So who can declare such an Epiphany, who has the Certitude? Possibly the one charged with realizing such a possibility on Earth. Possibly who has worked out this 'direct action from the Supreme'. It cannot be none other than the glorious Avatar who has been so appointed and so labouring. And for the yogi-poet to so declare he has to be Him." One of the finest and possibly the most difficult miracle has been caught in this opening line. There are dozens of insights already available about it, and they seem to be inexhaustible. One could even think of the beginning of the Second World War, the march of Hitler across Europe before the God would awake, and when he would awake the tide taking the divine turn. One can go even farther, and say that no multimedia presentations or choreographic presentations can seize in them its contents, yet each seizure promoting our advance. Here is a snapshot of a moment, telling the hour of the awakening of the Gods:

The moment of the awakening of the Gods is an instant of deep occult intensity. The alarum goes, and the Gods awake, and the divine Event begins. But who has set the clock in the night sky to strike at the given hour? 4 O'clock in the morning? Is not "Four" the divine number for Perfection? of Truth and Consciousness and Bliss and Knowledge? But who has set the clock over there, in the starless night? Perhaps that is what the entire set of quotations is going to reveal.

If this purpose of creative engagement with Savitri is served by the Wisdom Quotes of Savitri then there is every reason for us to be jubilant about it. It is with that expectation that this is being published. Participation on an individual or collective level will promote the work and it will be immensely rewarding if this is carried forward in that respect. That is our cherished hope, our optimism, our aspiration. 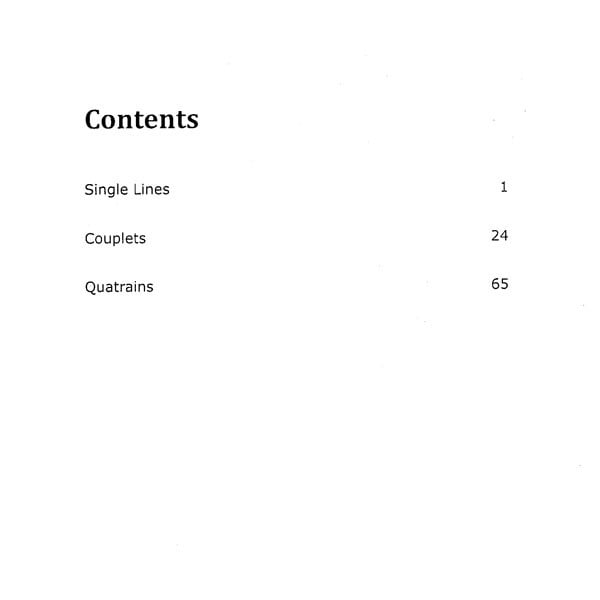 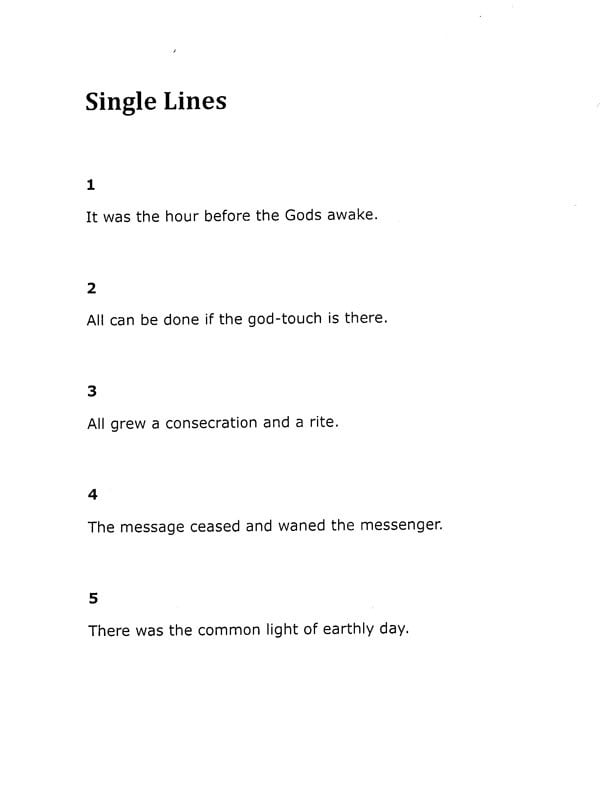 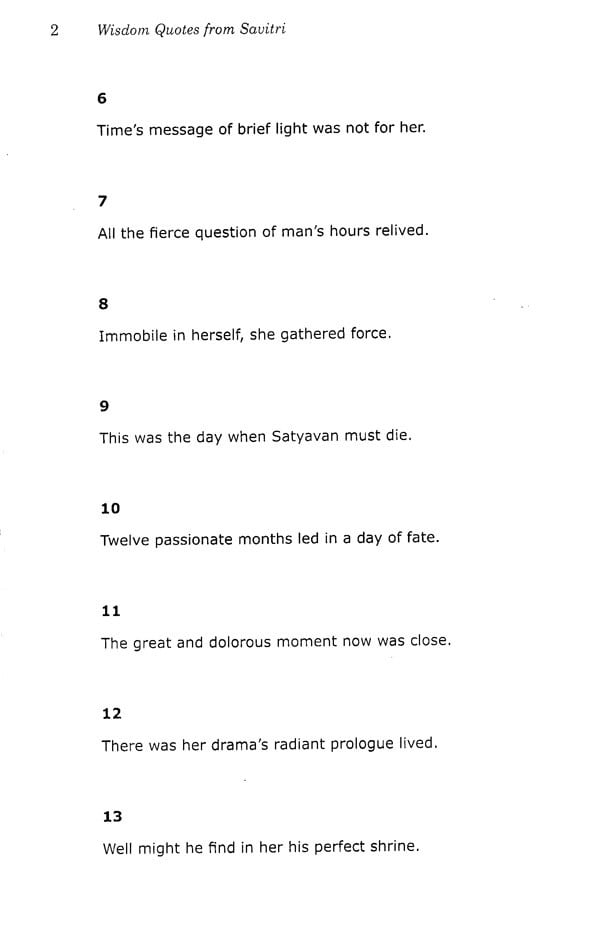 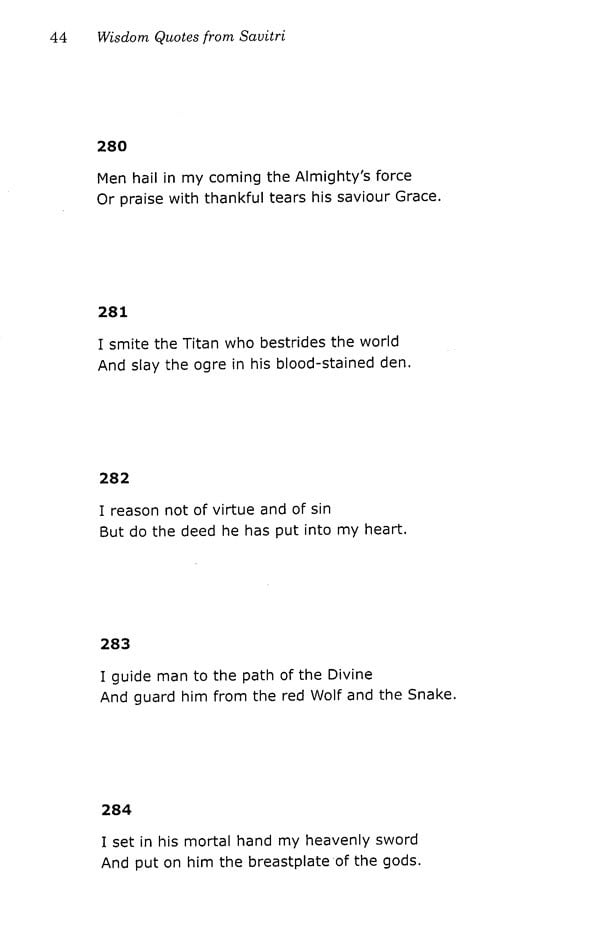 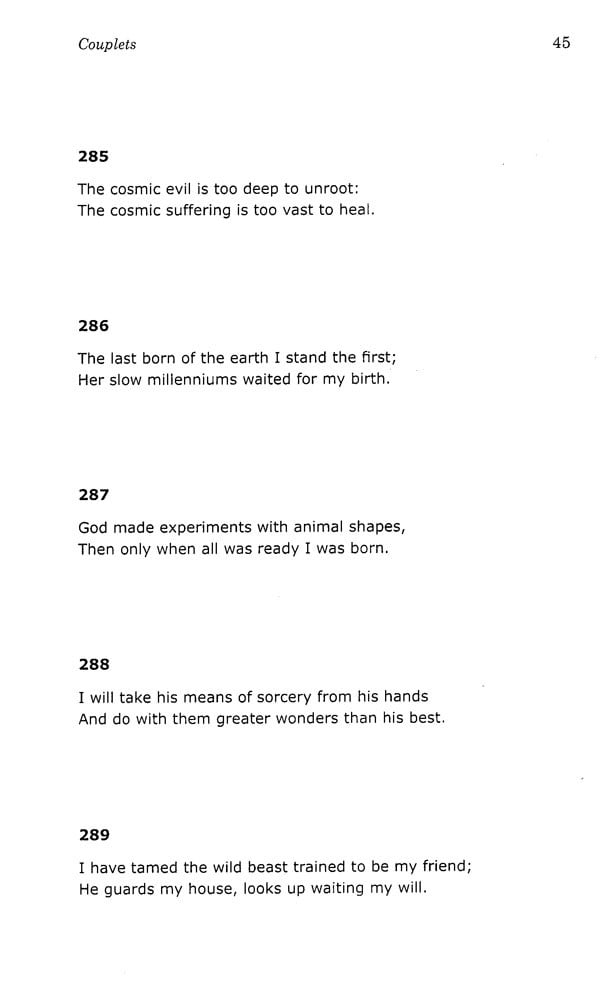 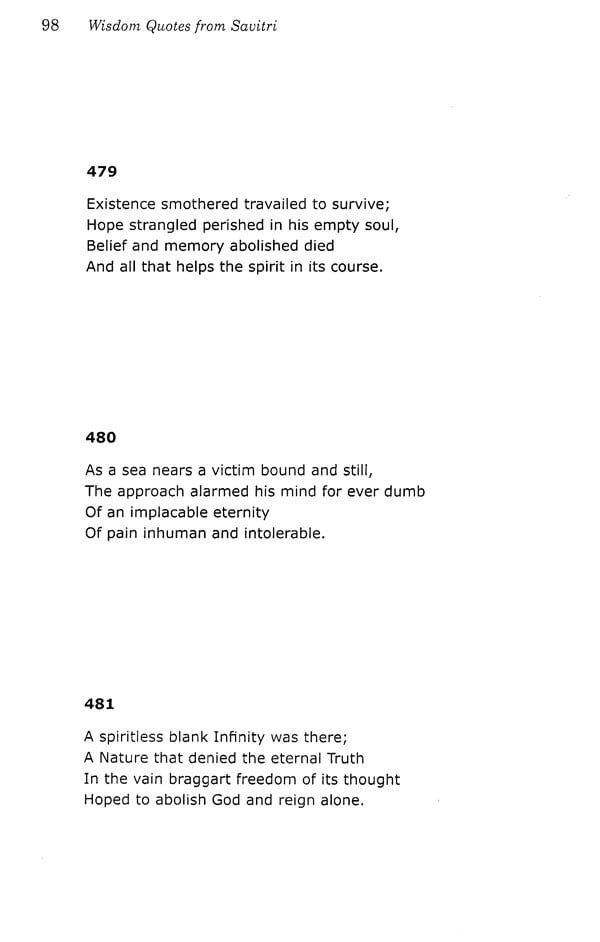 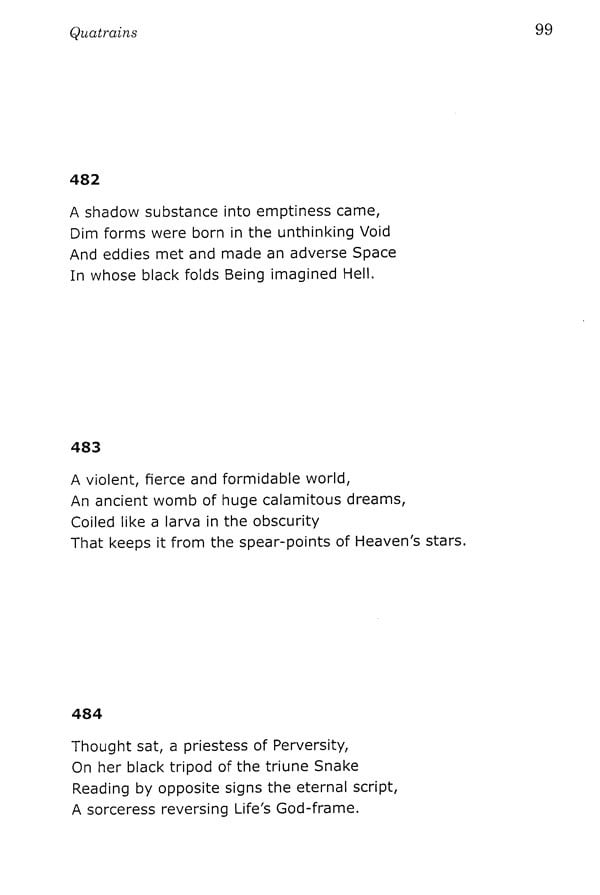 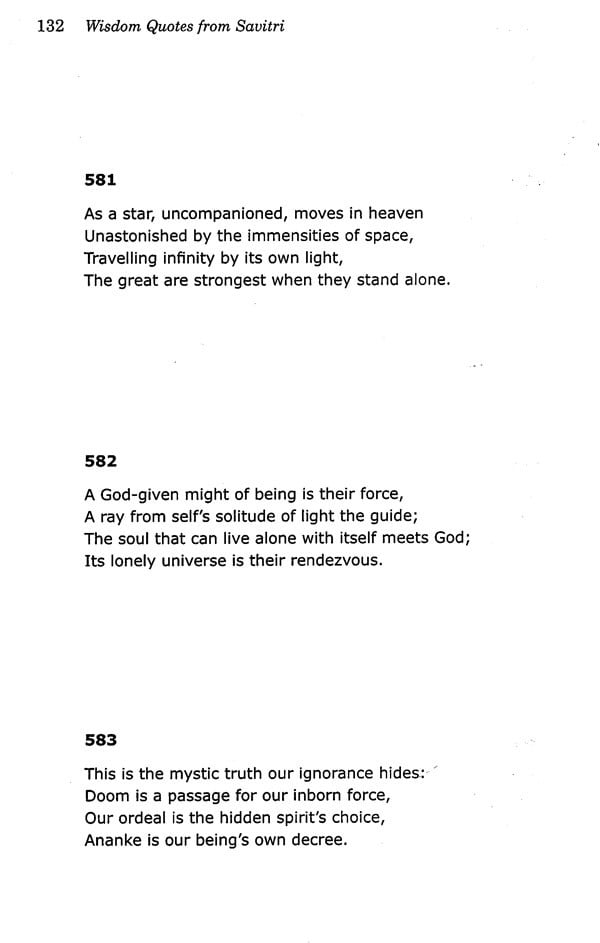 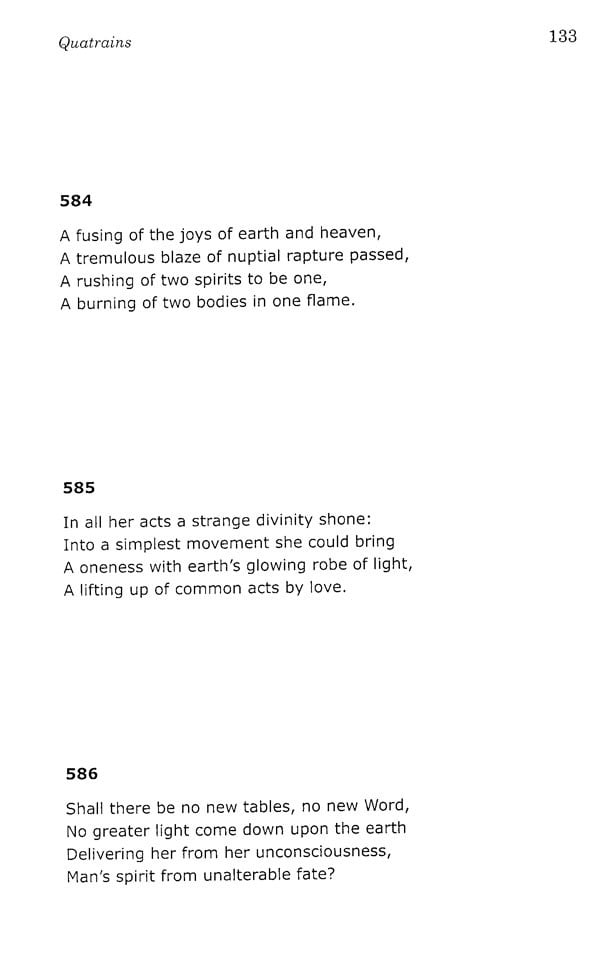