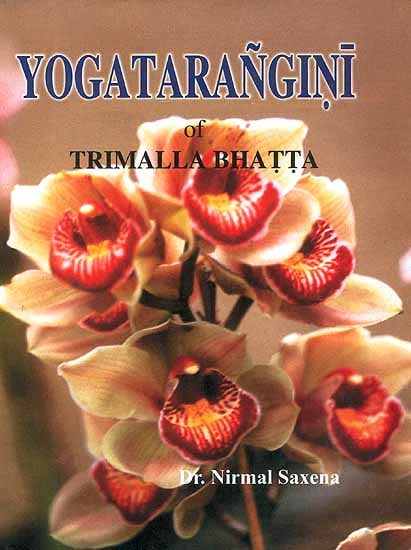 One of the most valuable treasures of Ayurvedic Samhitas, Yogatarangini has so far been confined to a few persons. Now the present work is being introduced to bring out its latent knowledge to the English speaking people and particularly for the western medical practitioners.

It is an extract of Indian medicine discussed in 56 books ranging from ancient period to later part of the 17th Century AD. It is a compiled work and masterpiece of Indian Medical System.

This work contains diagnosis, prognosis symptoms and treatment of the diseases in a very comprehensive manner. It will not only prove to be a modern critical treatise having historical background but also a book, which can be relied on for Indian Medical System.

This work contains diagnosis, prognosis symptoms and treatment of the diseases in a very comprehensive manner. It will not only prove to be a modern critical treatise having historical background but also a book which can be relied on for Indian Medical System.

It contains at the end several important appendices on plants (with Latin names), diseases etc. and a Sanskrit-English glossary of technical terms used in the text and to crown all this, a valuable deliberation on the entire text by the learned translator.

Dr. Nirmal Saxena, is well known for his outstanding contributions in the fields of Ayurveda and History of Sciences. In the course of nearly thirty two years dedicated to research he contributed innumerable articles to reputed national and international journals in History, Medicine and Science.

Born on November 4, 1952 in the family of a Vaidaya Krishna Kumar, he got his university education at Banaras Hindu University. He completed his Ph.D. on topic, "Development of Indian Medicine from 1400 to 1600 A.D."

I feel pleasure to certify that Dr. Nirmal Saxena Principal Investigator has completed his book entitled "English Translation of Yogatarangini". This book was recommended by the Advisory Board/Indian National Commission for History of Science. The book was sanctioned to Dr. Nirmal Saxena by Indian National Science Academy New Delhi. We are proud of our being an organization of this project.

The work and behavior of Dr. Nirmal Saxena have been excellent during his research work. I wish him all success in life.

Yogatarangini is one of the most renowned treatises on Indian Medicine. It is an extract of Indian Medicine discussed in 56 books ranging from ancient period to later part of the 17th Century AD. It is a compiled work and masterpiece of Indian Medical system.

Yoga means collection of many drugs in a medicinal preparation. When the physicians of Indian Medicine found themselves helpless to cure the complicated disorders of Human body, they were forced to innovate many new formulae of medicines. They compounded many drugs to increase the potentiality of the therapeutics. This increase of curing power in various formulae was very essential. Because commonly used medicines were unable to resist the chronic diseases. In due course these new formulae collections (Yoga Samgraha) was given the shape of a treatise. Many new books beginning with the name of Yoga were written during 10th Century AD and onwards.

The aforesaid definition of formulae collection (Yoga Samgraha) was fulfilled when Candrata wrote his Yogaratnasamuccaya in 10th Century AD. He is regarded the first physician of Indian Medicine who cleared the path of Yoga Samgraha. Candrata was followed by Sodhala.

Yogaratnavali was written in the reign of emperor Akber at Ahmedabad in 1574 AD. The whole treatise is divided in twelve chapters. The writer of Yogaratnavali was Dasa Tanaya Gangadhar krita.

Yogasra (1600 AD) was compiled by Daksha son of Vanara. In it a medicinal preparation - Madan Modaka by Vijaya (Bhanga-Cannabis Sativa Linn)- a narcotic drug is cited. This citation proves that this treatise was written after 14th Century AD.

Yogatarangini of Trimalla 1751, this well known collection of recipes must, however, be much older, as L., 203-the MS written in 1498 of another work by Trimalla is recorded. Trimalla flourished between 1383 and 1499 AD according to Prof. HD Velankar (Catal, BBRAS, MSS Vol. I, 1925, p.59). He was a Tailanga Brahman, son of Vallabha, grandson of Singanabhatta, father of Snkara bhatta the author of Rasa pradipa.

Trimalla Bhatta (17th Century AD) has mentioned in his Vrihatyogatarangini (Part II, Taranga 27) the use of Sankhiya (Arsanic, Metallic poison) in Firanga roga (syphilis) for the first time.

Trimalla Bhatta flourished after Bhava Mishra (1550 AD) and Lolimbaraja (1539-1608 AD). Because the references of these two are quoted in Yogatarangini. On the other side Yogaratnakara (1676 AD) has quoted Trimalla Bhatta. So the period of Yogatarangini is between Lolimbaraja (Between of 17th century) and Yogaratnakara (Last phase of 17th century).

Thus the justification of Yogatarangini's period could be done as middle of the 17th century AD (around 1650 AD).

This unique work aims at determining the history of different drugs when they first appeared in Ayurvedic texts, like Rugviniscaya (700 AD), Rajamartanda (1100 AD), Rasarnava (1200 AD), Sarangadhara Samhita (1325 AD), Virasimhavaloka (1383 AD), Madanpala Nighantu (14th Cent. AD), Rasaratna pradipa (1500 AD), Yogasata (1500 AD), Yogaratnavali (1574 AD), Rasadarpana (16th Cent. AD), Rasa Cintamani (1600 AD), Vaidyalankara (Before 1600 AD), Yogaratna (Before 1600 AD), Yogasara (16th Cent. AD), Yoga ratnapradipa (Before 1600 AD), Vaidya Jivana (1539-1608 AD.) It has given details of nadipariksa, vastrapariksa, etc. and has also provided additional useful information regarding pharmaceutical preparations and their administration, modified prescriptions for composition and potency of drugs based on scripture, tradition and experience. It is an important source book for getting a better understanding of the history of Indian medicine and also lays special emphasis on specific diseases and their cure.

Tables depicting the new diseases and their cure which where illustrated in the referred books of Yogatarangini due to influx and immigration of different races of world (Mohammedan & European etc.) are being analyzed in this research work to make the study useful to History of Science. In addition, a historical-textual and technical introduction has been added in the beginning.

Period wise chronology of the books referred in Yogatarangini.

Diseases and their mode of treatment as cited in 56 referred books of Yogatarangini.

At the end following appendices have also been given.

Units of weight with metric equivalents.

I hope the said study will find out when were, for the first time, the diseases, herb or drugs illustrated in the Ayurveda. What were the properties of these drugs and herbs and how did our physicians use them and thus how our medical system was affected. It will also be examined how and up to what extent Europe got such type of knowledge regarding Indian Medical System from India. 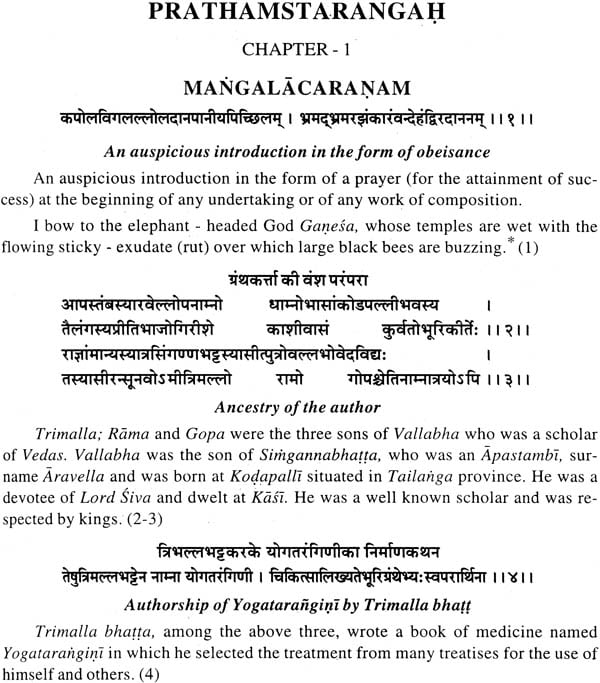 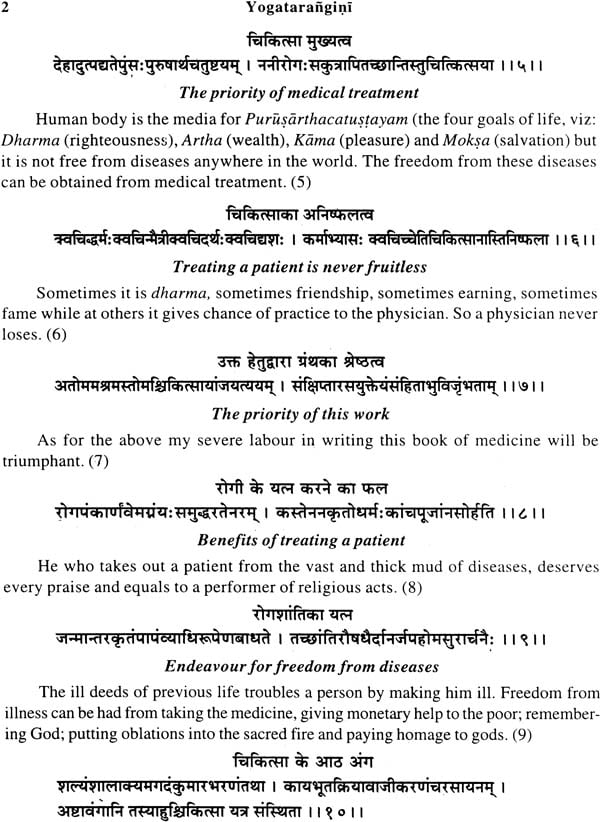 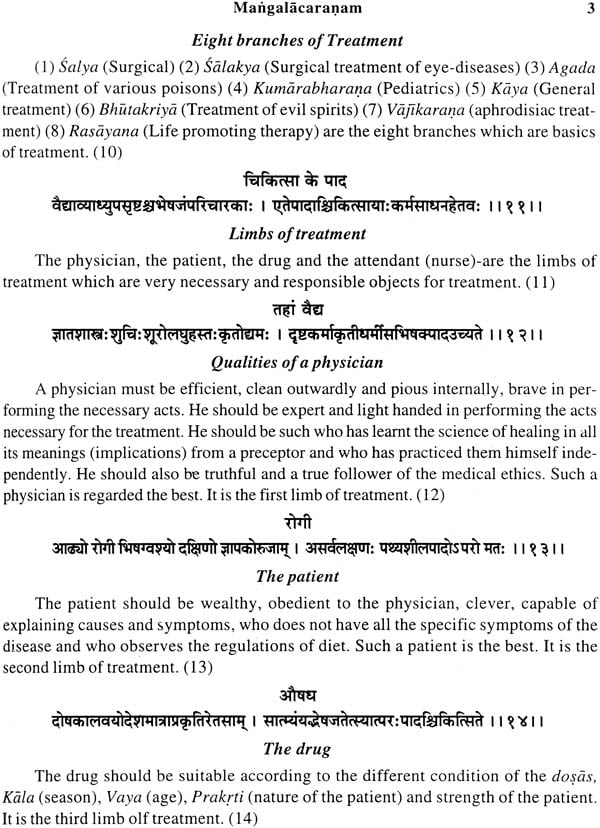 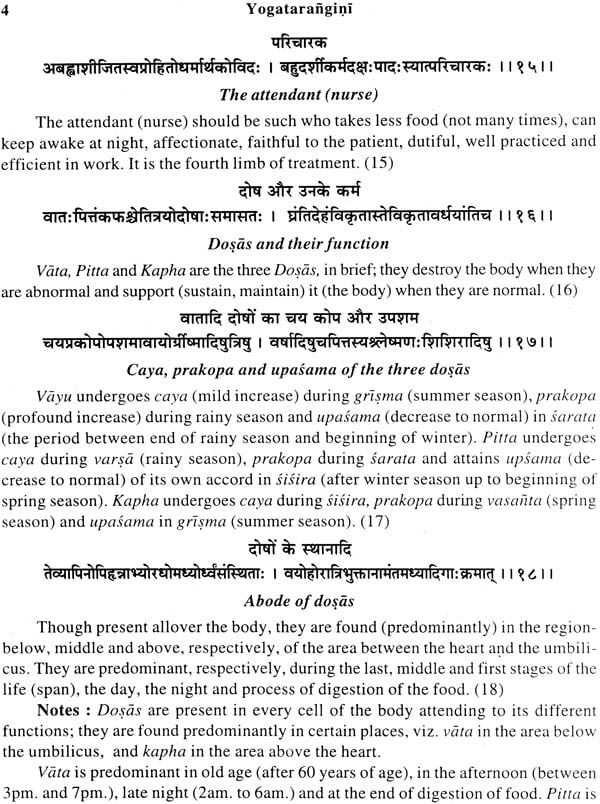 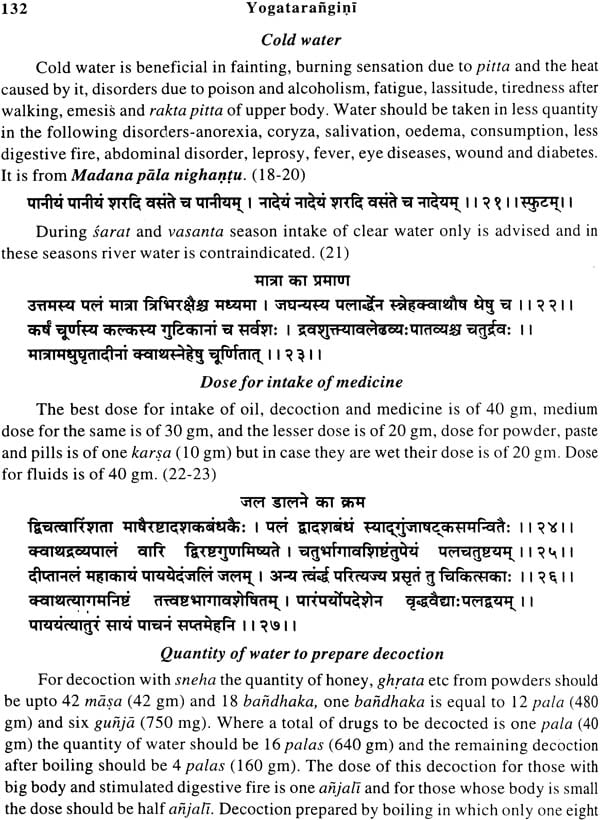 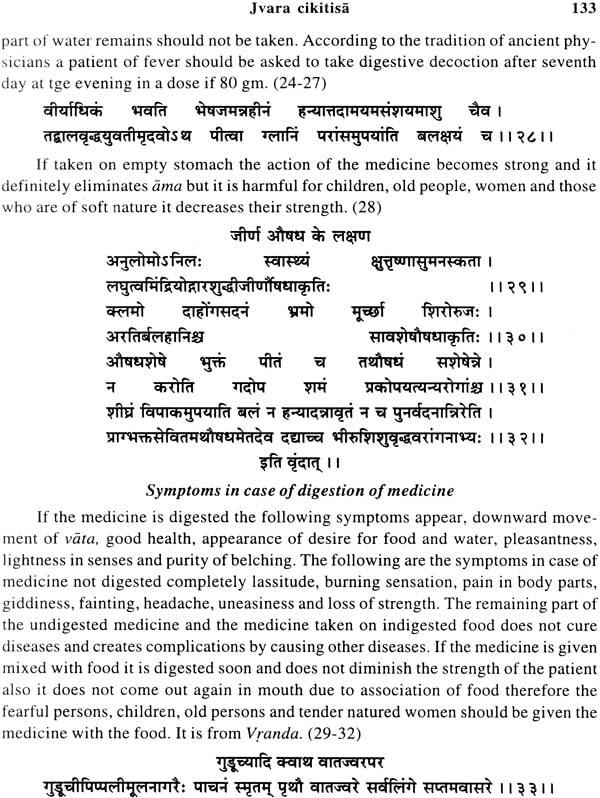 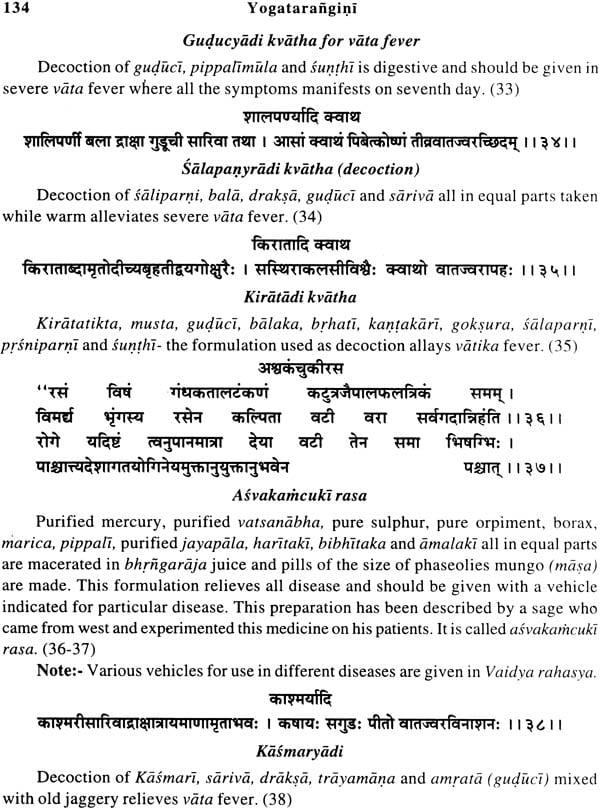 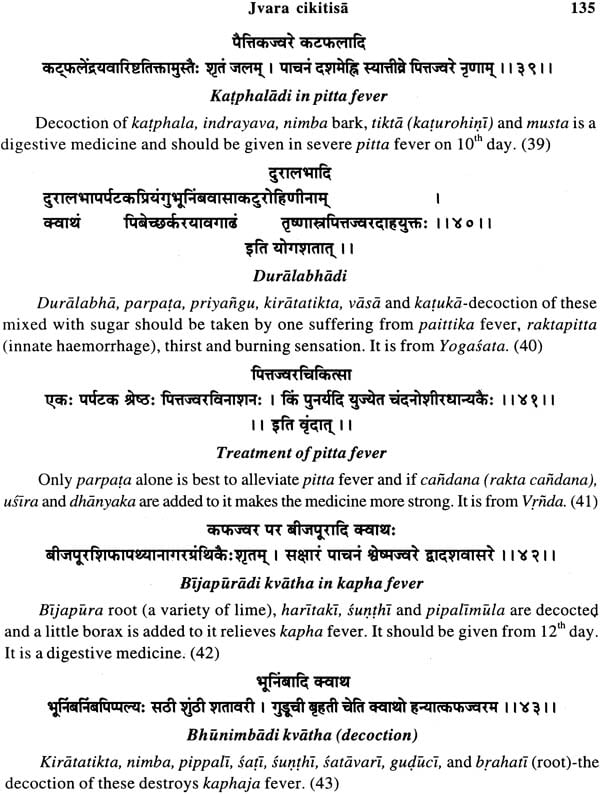 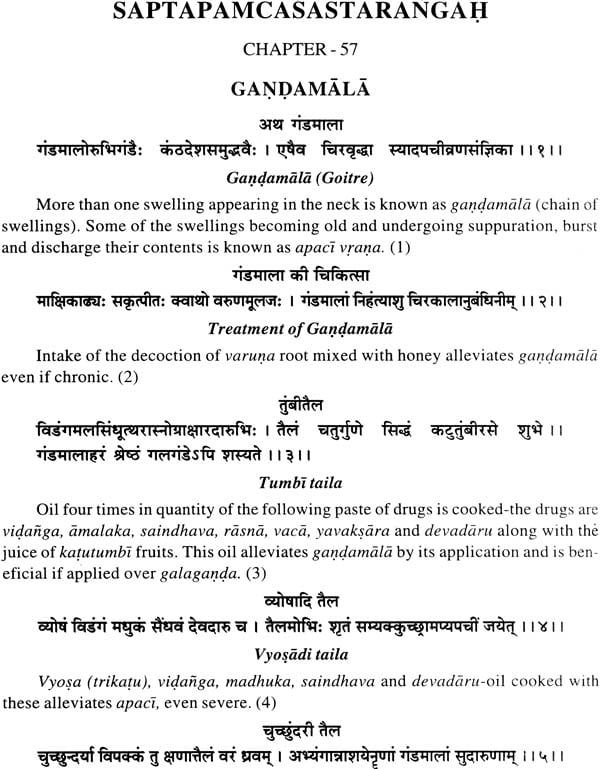 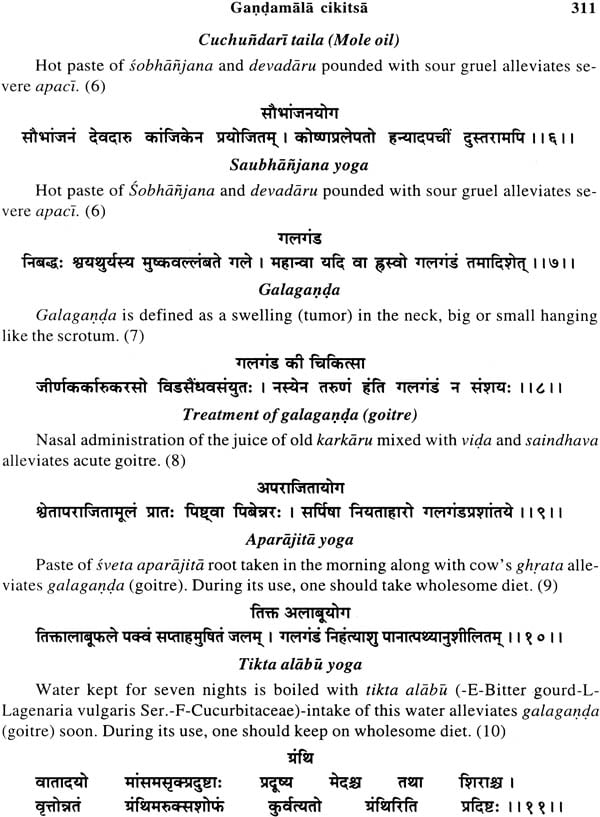 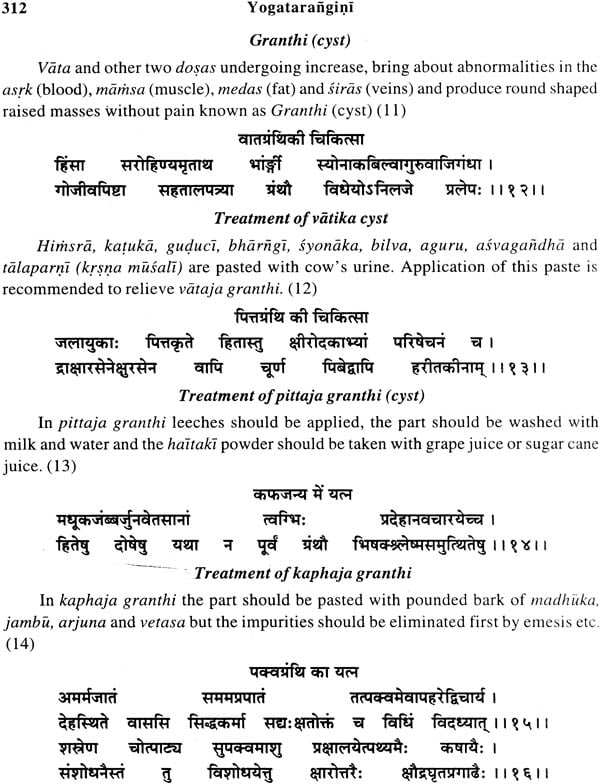 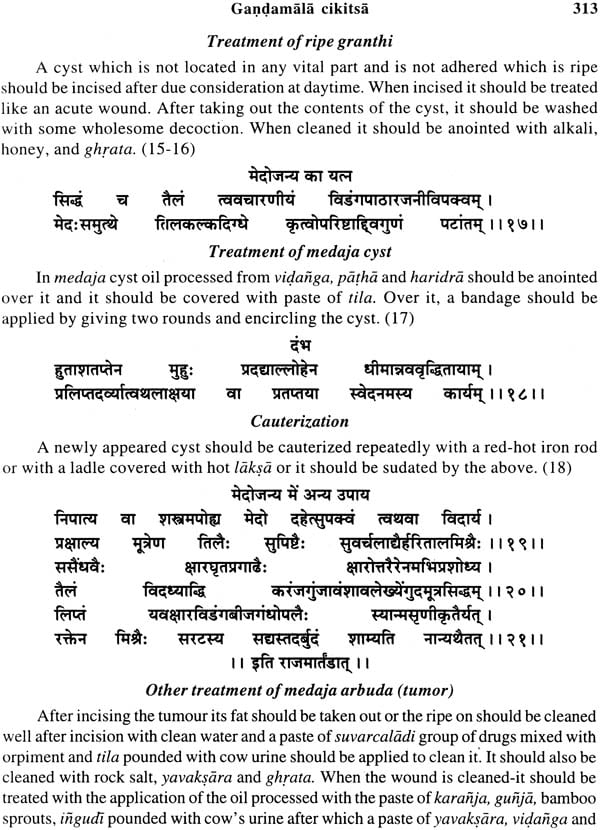 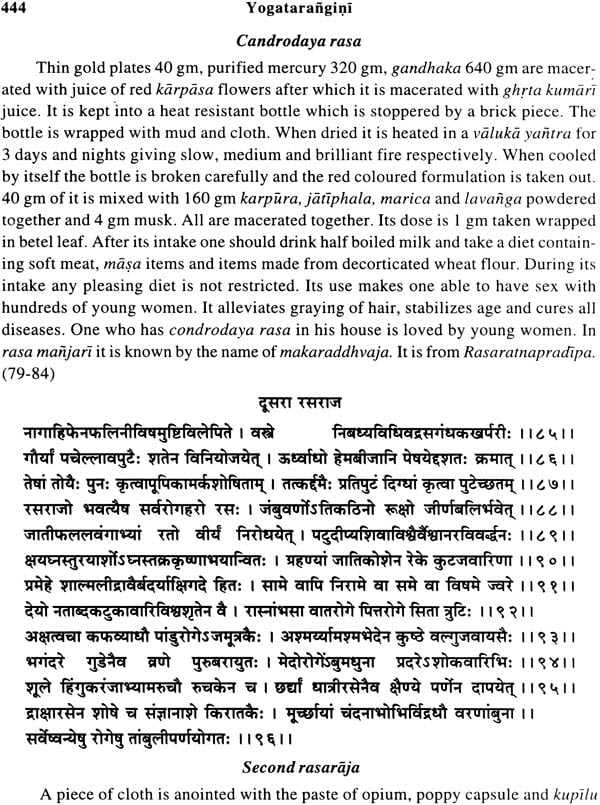 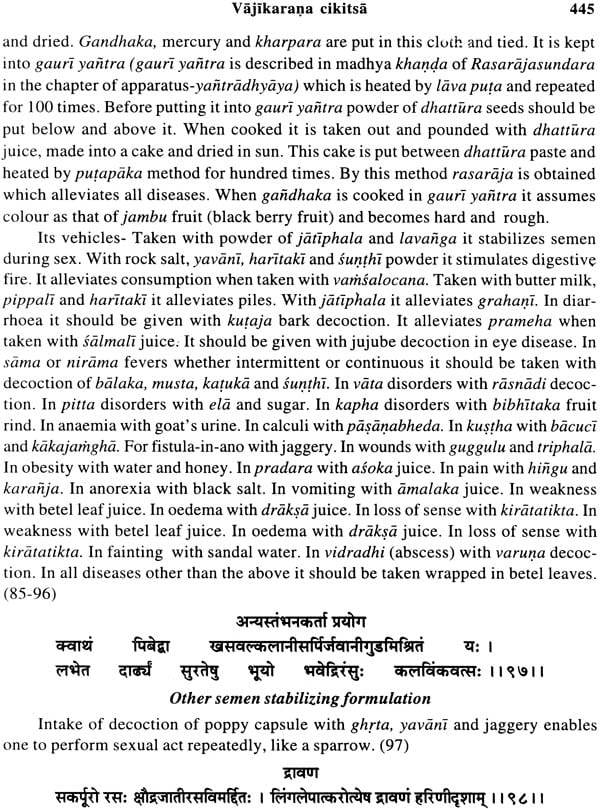 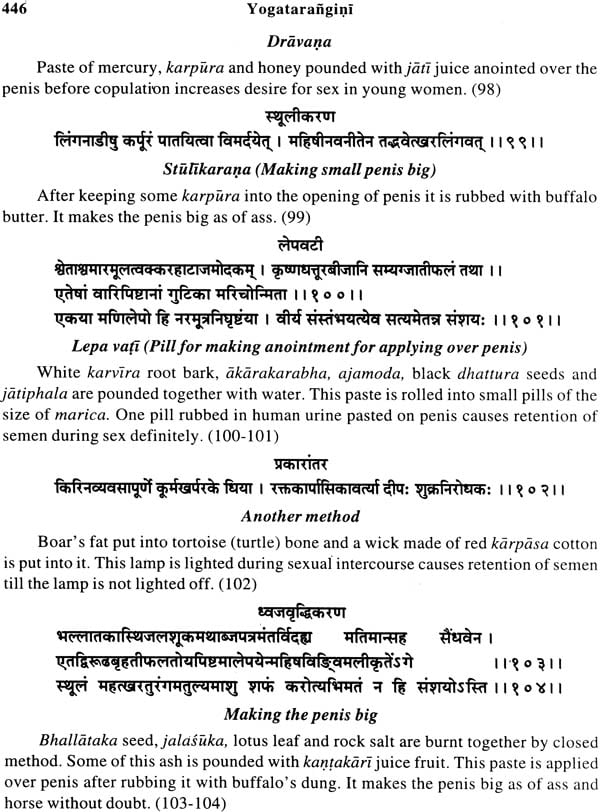 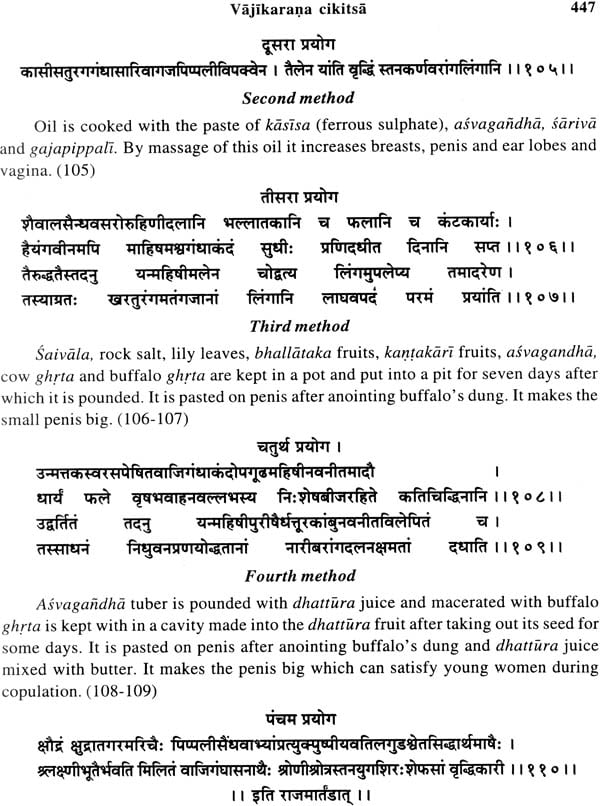