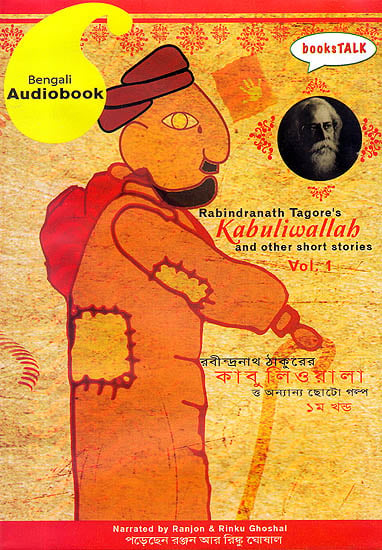 Gurudev Rabindranath Tagore
Needs no introduction Poet, author, artist, playwright, musician, philosopher, Nobel laureate and above all an Indian. He created so much of what it means to be an Indian today our national anthem Santiniketan, Rabindra Sangeet, Stories of several satyajit Ray films.

The spirituality and emotional beauty of his elegant prose and magical poetry was beautifully captured in his stunningly beautiful short stories. Many of us have read the translations, listening to them in Bengali however brings out a beauty that is perhaps lost in translation.

This two volume set is a collection of some of Gurudev’s great short stories. We at books talk audio books hope this will be only the first step in bringing out many such works in Indian languages. To make it possible to reconnect to our roots of language literature and story telling.

Kabuliwallah (The Afghan in Kolkata, 1892)
Kabuliwallahs Afghan peddler of dry fruits and saffron who roam the streets of India are loan sharks in reality. This warrior tribe from the faraway mountains of Afghanistan is not known to be nice to defaulters. In this story a Kabuliwallah befriends a littler girl Mini a preschooler who is quite ease with this bearded turbaned and dagger happy hulk of a man.

Ramkanai-er Nirbuddhita (Ramkanai’s Stupidity 1891)
Ramkanai was extremely disappointed when his elder brother in this last will bequeathed everything to his wife. He left nothing for his no good nephew Ramkanal’s he contests the will is a court of law where Ramkanai is summoned to testify. Expect the unexpected in the endgame.

Postmaster (Postmaster, 1891)
This is the story of a little girl who works as a domestic helps for the postmaster a bachelor. He soon becomes her family that she has never known. He grows very fond of her too. No it is more complex than that.

Streer Potro (Letter from a wife 1914)
This is perhaps the first story of protest in Bengali literature from a woman’s point of view. She question everything that the male dominated society does to its female inhabitants. She question the ethics and even the aesthetics of man woman based on subjugation denial and apathy.

Jibito O Mrito (Living and the dead 1892)
Kaadambari a woman in her twenties wakes up at night in a cremation ground. She thinks she is dead and that her consciousness is only that of a ghost. It takes her months before she realizes that she isn’t dead after all. But how can she prove to the world that she isn’t a dead woman walking?

Na-monjur Golpo (A Rejected Story 1925)
An editor asks his friends who was jailed for his alleged link with armed revolutionaries to write about his experiences. He starts narrating a bumbling story with a satirical look at himself and at people of his own ilk. The editor squirms.

Thakurda (Grandpop 1893)
With the Zaminadari system gone a babu of yesteryears has to give up all his possessions. He takes up a modest house in Kolkata where he is endearingly called grandpop by this neighbor. He has one quirk he insists that he will not go looking for a groom for his only granddaughter unable to tolerate this vanity his neighbor an eligible bachelor himself pulls a cruel prank on this old man.

Khokababur Protyborton (Return of the lost Son 1891)
Due to his old chaperon Raicharan’s momentary laxity a little child drowns in the river. Since he has served the family for two generations Raicharan is let of without any punishment but he loses his job. Years later he comes back to his lord’s house with a young adolescent Raicharan is returning their son who he had stolen.

For ease of listening this 3 hr 11 minutes long audio book is made of approximately 15 minutes long tracks like book marking.

This CD contains the book in MP3 format and also in M4B format is an audio book format and it supports book marking it works on most iPods.