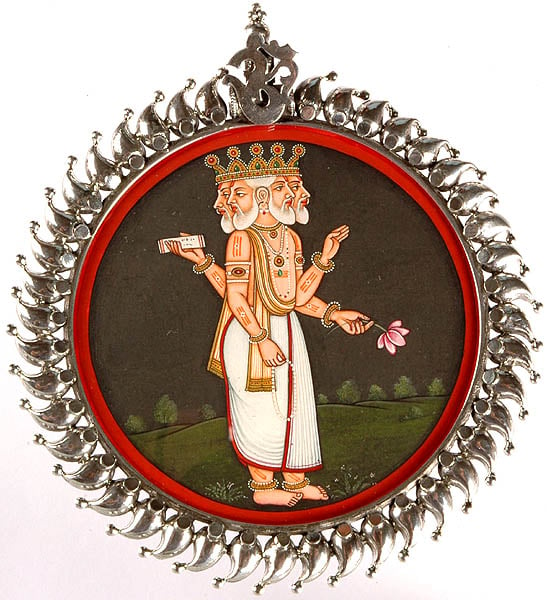 More than 1M+ customers worldwide
This artwork represents Lord Brahma, the Creator of the universe and one of the great God-trio of Hindu pantheon, the other two being Vishnu and Mahesha or Shiva. In exact adherence to textual tradition this image of Brahma has been shown with four heads and four arms. He is carrying in his four hands, again in exact adherence to the tradition of his iconography, rosary, lotus, pot and book. The book symbolises Vedas acclaimed to have been created by him. Alike the other three attributes, lotus, pot and rosary, have in his iconography their own significance.

Brahma is said to have been born from Vishnu's navel through the great lotus. In the beginning, after the Great Deluge, on the inspiration of Mahadevi Vishnu invoked his own creative powers and created earth in the form of lotus rising from his nave. Brahma is said to have emerged from this lotus. The lotus is thus his birth symbol. Brahma suffered from the passion to create. He hence devoted himself to rigorous penance for acquiring power to create. The rosary symbolises his great hundred year penance. The pot, which the Brahma icon carries in its left hand, is the symbol of Earth, which Brahma created. Thus, the four attributes of Brahma iconography represent his birth, penance, creation and the light of knowledge, which he spread.

As has the 'Puranic' tradition, initially Brahma had only one head. In the course of creation he created by the power of his mind a number of sons. Alike, from his own half he created a maid. She was extremely beautiful and was hence named 'Shatarupa', the one who possessed a hundred beauties. Brahma wedded her. The passionate Brahma was so attached to her that he did not remove his eyes from her face even for a moment. One day the sportive Shatarupa, to cajole Brahma, began whirling around him. With his numerous sons scattered all around it was not graceful for him to move round with Shatarupa with his eyes fixed on her. He hence created on his neck four heads in all four directions. Shatarupa wished to tease him more. She flew into sky. Brahma then created a fifth head upon his matted hair. This fifth head was later destroyed by Shiva. On the strength of his five heads Brahma claimed superiority over Shiva. This enraged Shiva and he crushed Brahma's fifth head. In painted versions of Brahma he usually has all his heads bearded, which in metal cast has its own difficulty and hence in metal-cast his heads are usually without beard.