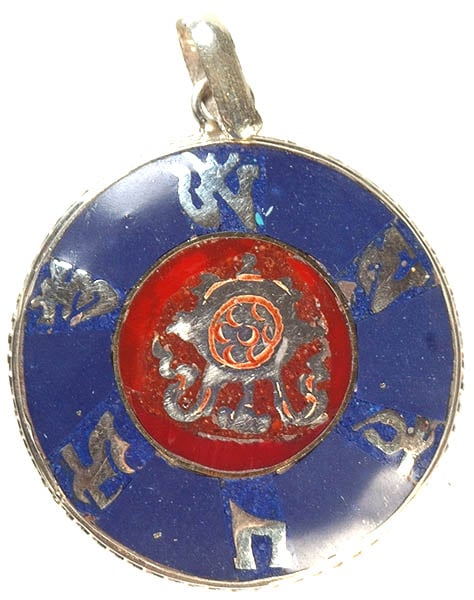 100% Made in India
The explanation of the six-syllable mantra, OM MA NI PAD ME HUM is as follows:

MA closes the door to the suffering of being reborn in the warring gods' (asuras') realm. The suffering of these asuras is constant fighting. This suffering comes from jealousy.

NI closes the door to the suffering of being reborn in the human realm. The suffering of humans is birth, sickness, old age, and death. This suffering comes from desire.

PAD closes the door to the suffering of being reborn in the animal realm. The suffering of animals is stupidity, preying upon one another, being killed by men for meat, skins, etc., and being beasts of burden. This suffering comes from ignorance.

The wheel consists of three basic parts: the hub, the rim, and spokes (generally eight in number). Its underlying form is that of a circle, which is recognized across all traditions as a shape that is complete and perfect in itself, qualities which inform the teachings of the Buddha too.

Individually, the rim represents the element of limitation, the hub is the axis of the world, and the eight spokes denote the Eightfold Path set down by the Buddha, which leads to the cessation of all suffering.

A further esoteric interpretation makes reference to the three trainings which form an integral part of Buddhist meditative practice, associating each of the three parts of the wheel with one such practice. This symbolism is as follows:

a). The hub stands for training in moral discipline. Through this practise the mind is supported and stabilized. Thus it is the practise of moral discipline that upholds our meditation, just like the supporting axis of the world.

b). The spokes stand for the correct application of wisdom, which cuts off ignorance and ends suffering.

c). The rim denotes concentration, which holds the entire meditative practise together, just as the wheel of life is held together by its rim.

The wheel evolved as a symbol of the Buddha's teachings and as an emblem of the Chakravartin or 'wheel turner,' identifying the wheel as the Dharmachakra or 'wheel of law.' The Tibetan term for Dharmachakra (chos kyi'khor lo) literally means 'the wheel of transformation.' The wheel's swift motion serves as an apt metaphor for the rapid spiritual change engendered by the teachings of the Buddha. Hence, Buddha's first discourse at the Deer Park in Sarnath is known as the 'first turning of the wheel of dharma.' Likewise, his subsequent discourses at Rajgir and Shravasti are known as the 'second and third turnings of the wheel of dharma.'