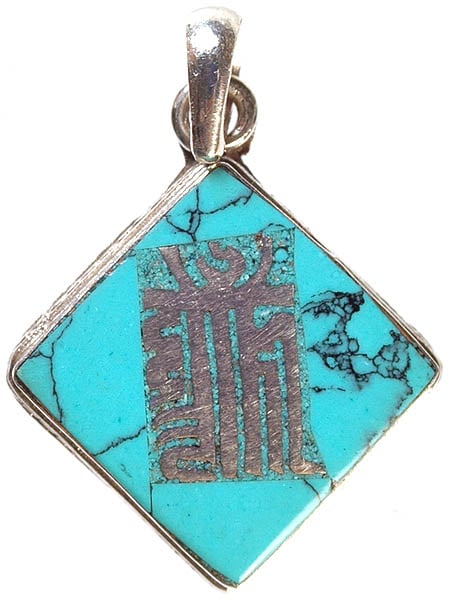 100% Made in India
This pendant shows the ten interlocking or stacked syllables of the Kalachakra mantra (Om Ham Ksha Ma La Va Ra Ya Sva Ha), commonly known as the 'all-powerful ten'. The interlocking body of this mystical monogram is composed of the seven syllables Ham Ksha Ma La Va Ra Ya written in Lantsa characters. Lantsa is an Indian Buddhist script, probably of late Pala origin although certain scholars date it as late as the seventeenth century. It is specifically used for mantra syllables and the titles of sacred texts. This stylized and beautifully ornate script was devised from the Sanskrit alphabet and used extensively in Nepali Buddhism. Above the broad horizontal bar which crowns these seven interlocking consonant syllables is a crescent moon, a sun disc (or dot), and a dissolving flame-tip which completes the ten stacked syllables. An eleventh syllable, the vowel syllable A - representing the element of space - is not depicted, but it merges with all of the consonant sounds as the musical drone of the tonic note gives life to the melodic structure of a musical composition.

The entire symbolism of these stacked syllables is extremely complex, encapsulating meanings which relate to all the three aspects of the Kalachakra tantra - the external, internal, and alternative. The external aspect deals with cosmology, astronomy, and astrology; the internal aspect deals with the subtle energy systems of the individuals mind and body interrelationships; and the alternative aspect deals with the actual deity practice of Kalachakra. However the main symbolism of the 'all-powerful ten' relates to the cosmology of Mt. Meru and its surrounding universe according to the Kalachakra, and to the complex geometrical mandala palace of the deity Kalachakra.