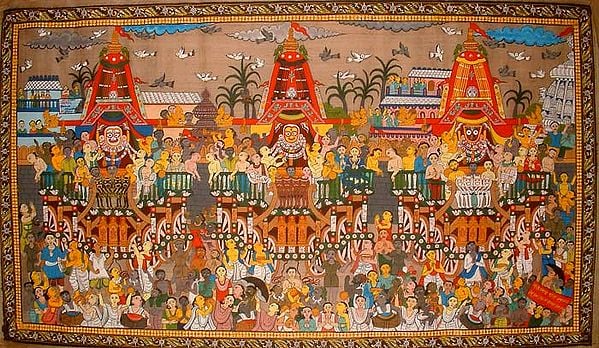 $360
FREE Delivery
This item can be backordered
Time required to recreate this artwork
6 to 8 weeks
Advance to be paid now
$72 (20%)
Balance to be paid once product is ready
$288
Notify me when this item is available
It is always difficult to pin the exact beginning of any traditional art. Similarly for the pata chitras which have existed in various parts of Orissa since time immemorial.

The pata chitras mainly have the designs of Sri Jagannath, Balabhadra and Subhadra, the three deities. Every year, after the Snanotsav (bathing ceremony), the deities reside in a secluded chamber called Ansara Ghar till the Rath Yatra, which is depicted here in full splendor. The chariots, as much as the idols are entirely crafted in wood. The three cars housing the deities are fixed with sturdy ropes, which are helpful to devotees pulling the monumental rathas. The annual rath yatra is accompanied by celebrations and rituals. The drum and cymbal players in the foreground beat them to the tune of devotional singing. The brahmins and pujaris of the temple sit atop the chariots distributing 'prasadam' and blessing the general public.

The entire composition is teeming with people, giving the artist choice of various colours, costumes, facial features and postures. The sky, instead of providing spatial relief to the composition, adds to the clutter; various birds and clouds vie with the fluttering flags at the top of the chariots for prominence in the expanse above.