$275
Quantity
Notify me when this item is available

The Seven-Eyed Tara or White Tara is the special goddess of long life. She symbolizes perfect purity, and is believed to represent Transcendent Wisdom, which secures everlasting bliss to its possessor. She too has the power to grant wishes, remove obstacles and to protect from danger and distress. She is the Consort of Avalokiteshvara.

The cult of Tara is very popular in Buddhist countries, especially in Tibet, Mongolia, China, and Nepal etc. In Nepal she is popularly called Sapta-Lochani Tara or Seven-Eyed Tara as she has seven eyes of knowledge  three on her face, two on the palms of her hands, and two on the soles of her feet. The ceremonies of Tara are an integral part of Karmpa rituals. Her Mandalas are worshipped from third to ninth every month. On auspicious days there are special services to White Tara. In the daily ritual practices of the most important monasteries, at seven in the morning takes place the meditation on the Mandala of Tara, this includes the recitation of her sadhana texts. The Tibetans pray to her for long life, for human life is infinitely precious.

Here White Tara is seated in a circle in the center of the Mandala which rests on brilliantly drawn crossed vajra. There is a square outside the center circle which is divided into four triangles and decorated with stylized designs. The walls of the building are also decorated with geometric, stylized and floral designs. There are four gateways in the square with auspicious offerings in them. The area outside the building is filled with stylized design in gold. The building of the Mandala has an outer circle of flames protecting the inner residence which is florally rendered here. The circle is followed by the circle of lotus petals. Here the spiritual realm begins and one enters the Mandala.

Across the top of the painting are Five Dhyani Buddhas, from left to right are  Akshobhya, Ratnasambhava, Vairochana, Amitabha and Amoghasiddhi, respectively. All the Buddhas are seated in vajraparyankasana on lotus flower supported by leaves. The left corner depicts one more image of Goddess White Tara. The lower right corner is filled with the figure of wrathful Vajrapani. The bottom center depicts perhaps a lotus plant which flourished up to the top and five Dhyani Buddhas, mentioned above, are actually seated on lotuses of this plant. Moreover middle ground and foreground portrays clouds, trees, rocks and lakes, respectively. The painting is very much suitable for sadhana and rituals as it depicts the images of Cosmic Buddhas, Vajrapani along with the Mandala of long life Goddess White Tara. 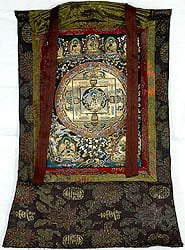