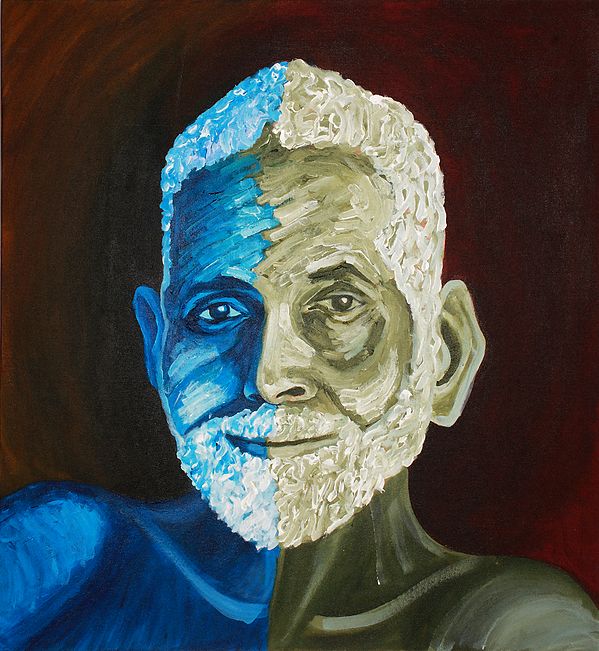 The Tranquility Of Ramana Maharshi

$296.25
$395  (25% off)
FREE Delivery
Only 1 available
Sri Ramana Maharshi was more than a modern-day sage. In the language of yoga, he was a jeevanamukta who propagated the twin paths of svadhyaya (self-enquiry) and bhakti (unconditional love). As a youthful sannyasin, he had gathered quite a following in his ashrama in India and grown popular in the west. The oil painting that you see on this page captures the self-contained composure of the Maharshi.

The subject in and of itself is a bitone composition. Earthy blue and green, interspersed with ample proportions of white, make up the Maharshi’s complexion. The colour has been superimposed on a dark, crimson background with luxuriant strokes of the brush. The same is best appreciated by being zoomed in on. While the lines that make up the hair and beard are a chaotic profusion of moody brushstrokes, the ones on the face bear a semblance of relative uniformity. The aged neck and shoulders of the Maharshi feature a more unassuming technique.

The brushstrokes that have gone into the background of the bust are of a smoother, more solid nature. The dense crimson colour with black overtones gathers in an all-absorbing vortex at the back of the wisened, whitened head in the foreground. Note the dull green undertones in the crimson to the right of the subject, in sharp contrast to the jewel brilliance on the left. 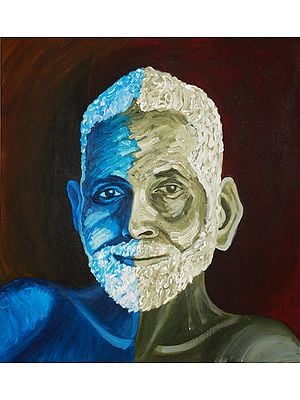