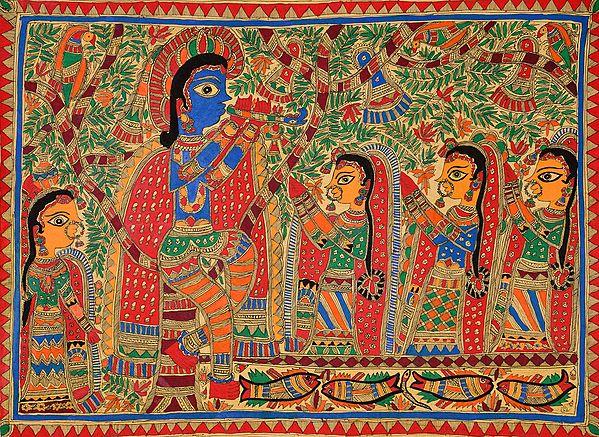 $195
Quantity
Notify me when this item is available

Fair trade
Keeping with the spirit of the Bhagavata Purana that perceives Krishna as the living spirit of the cosmos seeking in him all its moods, colours and reflections, this exceptionally brilliant folk painting by Bachchodevi, a Madhubani artist known for her bright multi-colour renditions, portrays the universe : trees, plants, humans, birds, fish and all, bursting with colours the moment the sweet melody emitting from the flute of Krishna blends with winds reaching them. Bachchodevi’s passion for colours outstands everything else in the painting : proportions, naturalness, feasibility …

Bachchodevi conceives the trunk of her tree like a tall seat draped in beautiful multi-coloured tapestry, and the tree’s alike conceived branches, as the seat’s two arms to hold Krishna in between, or support him on sides. She does not allow realism to question as to how a tree’s clumsy rough-tough trunk or branches could transform into the beauty as a gems-studded ornament. She packs all colours of her palette into the body of a single fish and does not hunt for water to inhabit them. Just a half column on the bottom with nothing denotative of water or anything defining a river or pond – nothing more than a narrow frame around these fish, comprises her vision of river Yamuna or a reservoir. Her passion for colours reflects in all forms : parrots, vipers, various insects, even in the body colour of her human figures, besides costumes, ornaments and the entire background.

Apparently the painting seems to portray the blue-bodied Krishna seated on the tree’s trunk blowing his flute, again a multi-colour pipe with its head designed like a mythical crocodile with its muzzle conceived like an elephant trunk, and a couple of cowherd maidens, one perhaps Radha, flanking him on his left, and a third, on his right. While those on his left stand with folded hands as paying homage or making a prayer the Gopi on his right is holding a pot on her head. However, seen in context to various ‘Krishna-lila’ episodes the painted forms, the figures’ posturing and the background, appear to illustrate three popular legends from Krishna’s life : one, ‘vastra-harana’, two, realising levy on milk-products exported to Mathura for the use of Kansa and his courtiers, and three, the Purnamasi episode leading to Rasa – cosmic dance, by Krishna with the Gopis.

As is the popular legend, cowherd maidens of Vrindavana used to bathe nude in public pond outside the village. Considering it against the norms of modesty Krishna decided to teach them a lesion. One day when forgetful of their garments laid on the pond’s bank Gopis dipped into water or swam away, Krishna came there, collected all their garments, hid them on the branches of the Kadamba tree on the pond’s bank and sat on its trunk. When after their bath Gopis found their garments missing and Krishna seated smilingly on the tree, they realised the mischief and implored him with folded hands to return them their clothes. As is the modus of folk arts, Madhubani in particular, a theme or legend is illustrated using a few, sometimes even a single, motifs. For illustrating the ‘vastra-harana’ – stealing away garments, the artist has used three motifs : the pond on the bottom with fish wading across, Gopis imploring Krishna with folded hands and a couple of costumes : blue and crimson, hung on the branches of the tree above them.

The figure of Krishna has been used for illustrating the ‘vastra-harana’ legend but with flute on his lips – not an element in the ‘vastra-harana’ episode, he seems to illustrate the legend related to ‘Rasa’ along the other. On one Sharada Purnamasi – the full moon night of the seventh month under Indian calendar, when after the monsoons’ clear sky the moon was the brightest, Krishna, inspired by the full moon-night’s magic, taking his flute, came to Yamuna’s bank and seating on his favourite Kadamba tree began blowing it. The entire surroundings burst with colours and Yamuna’s banks, with silvery hue. The melody reached Vrindavana, Gopis heard it and mad in passion they rushed to Yamuna’s bank where they danced whole night to its tunes.

Krishna’s position along with the cowherd maiden with the pot on her head on his right illustrates yet another legend known in the ‘lila’ tradition as ‘Dana-lila’, sometimes translated as realising toll-tax. Krishna did not approve that the entire milk-products that involved the labour of his friends was exported to Mathura to feed Kansa and his demons and wanted that they were given their due share. When not heard, one day he decided to post himself along his friends on Vrindavana’s outskirt on the passage leading to Mathura and demanded all couriers of milk-produce their share in it, and the pots of those who did not give such shares were broken as token of his disapproval and resentment.