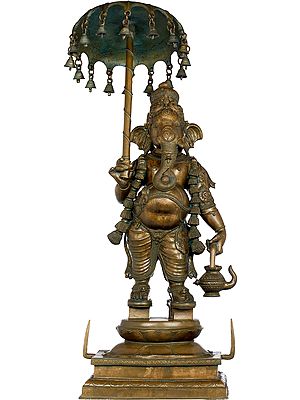 $1395.00FREE Delivery
This bronze sculpture is a unique study in Lord Ganesha iconography. It is the yogic roopa of the son of Hinduism's mahayogi, Lord Shiva. The giveaways are in the kamandalu that He carries in His left hand, a quintessential possession of the ascetic. All the bhiksha He receives is gathered in it, no matter the nature of the edible in question; because He consumes mitahar (measured proportions of food) for His bare survival, as opposed to consumption for pleasure. Another sign of the Lord's asceticism lies in the kind of slippers that grace His feet. It is called kharam, which serve to merely clothe the sole and are secured in place by being wedged in between the hallux and the index toe. An open garland graces His torso.

While yogis are not known to take shade under a parasol, the one in this composition serves the purpose of a temple canopy, evening out the weight suggested by the multi-tiered pedestal the deity is on. The bells that dangle from its edge produce a sweet, sonorous sound in the wind. The conventions pertaining to Lord Ganesha iconography are, however, intact - the naga (snake) that secures His chubby belly, the laddoo He cradles at the tip of His belled and striated trunk, and the tilak at His forehead indicating His parentage. The hallmarks of endemic South Indian workmanship include the delicately carved peacocks on His crown, the lifelike stance of the ears and the folds of His dhoti, and the grand pedestal that supports His frame.