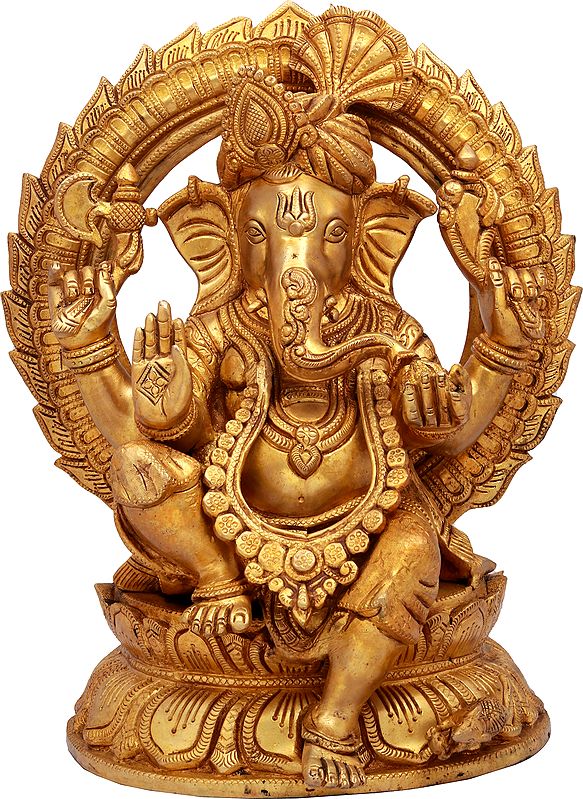 $765.00
This Ganesha murti would be a beauteous addition to your space. Its resplendent gold-like finish, and the gracious aureole covered in finely carved petals, make this sculpture a shrine in itself. His elephant head has been elaborately wrapped in a turban. It is flanked by the two flaps of His elephant ears, each of which are pierced and adorned. From between His mischievous brow emerges the adorable little trunk tattooed with curvaceous wave-like motifs. The thickly pronged trident on His temple reveals His parentage, that He is the son Shiva Himself.

A million stories abound of how Ganesha got His elephant head. One legend says that the handsome son Parvati had was gazed upon by Shani, which caused His head to disappear into Goloka. The Vishnu, borne by Garuda, went off in search of a head - any head - for the boy, and returned with an elephant's. In another a group of minor deities led by Indra sought succour from Shiva, whose Somanth temple outshone everybody else's. Shiva single-handedly created a child version of Himself, which enraged His wife Parvati. She cursed multiple deformities upon the boy. In an obscure tale from the Skanda Purana, it was Parvati Who gave the rakshasi Malini a potion. Upon drinking it she gave birth to a son with five elephant heads, willed by Shiva to fuse into one.

The murti, of course, has each aspect of His iconography intact. The single tusk (ekdanta); the implements in His hands as well as the ones raised in blessing and holding the object of His childlike love, a laddoo; the magnificent shringar, including the streams of chunky gold and jewels that reach down to His pot-belly; and the chubby little legs, clad in a dhoti till the mid-calf, that dangle over the flawlessly sculpted lotus pedestal. The composition is such that the deity gives off an aura of childlike innocence and lovingkindness, qualities that make Ganesha the most widely loved boy-deity in the subcontinent.