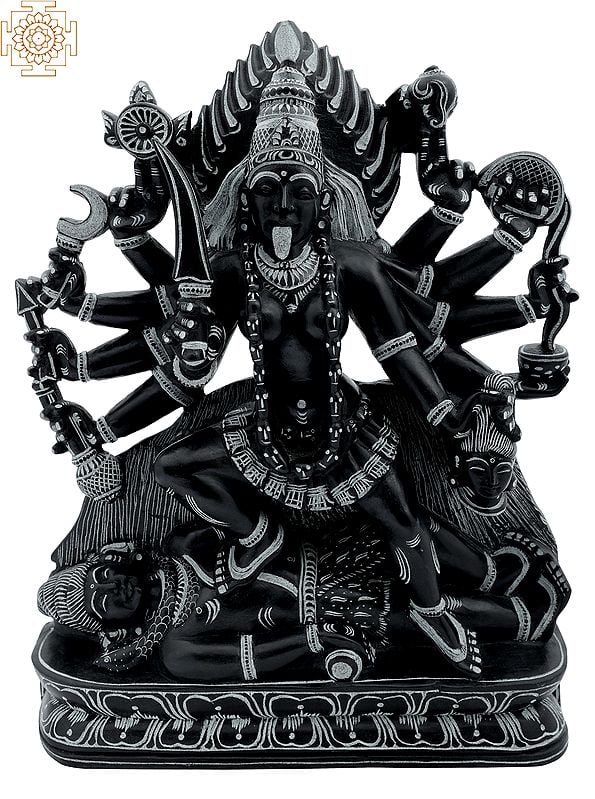 Mahakali, the great Hindu goddess who originated from the fiery anger of goddess Durga, during her battle with the forces of Mahishasur, is an extremely potent materialization of the female energy found in every particle of the universe. In Hindu-Tantric traditions, it is believed that Kali symbolizes Parvati- the Shakti (divine powers) and consort of Shiva. With her sudden and powerful movements, she brings him into action, consequently commencing the Kaal Chakra (cyclical movement of the time). As an incarnation of the all-powerful goddess who is key to bringing Mahakala (literally, ‘the great time’, an epithet for Shiva) out of his passive state, Kali is ‘Kaal-Kaamini’- the enchantress of Kaal (Shiva).

Exquisite, in every sense, this black marble statue of Maa Kali alludes to the beauty and allure of the divine goddess. Majestically standing over the body of Shiva, Kali appears to have just entered the scene, during her legendary walk after the battle with the demons. The maker of the idol has presented Devi Kali as the sovereign of the entire creation. All the gory details that accompany the imagery of Kali in general- her lolling tongue, the garland of skulls, her lower body garment made out of the severed hands of her enemies, have been toned down and beautified, in order to fit her visualization as a royal mother-goddess. Her beautifully long tresses are pointed upwards, creating a fiery aura for the goddess. In the place of her third eye is a bindi (a distinct dot worn by married women). Despite Maa Kali being in her Dasha-bhuja (ten armed), battle-ready form, there is discernible calmness in her demeanour. There is a softness and grace intrinsic in this rare sculpture of Kali, which is apparent in the way her fingers gently wrap around her Khadag (sickle) and other weapons. Devi’s physique is divine- she is the most beautiful woman in the three realms. Her legs placed apart, are made to look dynamic with the use of white lines that signify musculature. Shiva lying under her, adorned with his necklace of snake and hide of a tiger looks appealing. Both Kali and Shiva, magnificently presented in a fitting medium of Mahabalipuram stone, perfectly match each other’s form. The platform on which the mother-goddess is standing appears beautiful with its lotus petal-shaped decoration.

The eyes of Mahakali, which are equivalent to the celestial bodies- the Sun and the Moon, are closed. Present in her exquisite representation, Kaali awaits her moment of awakening!