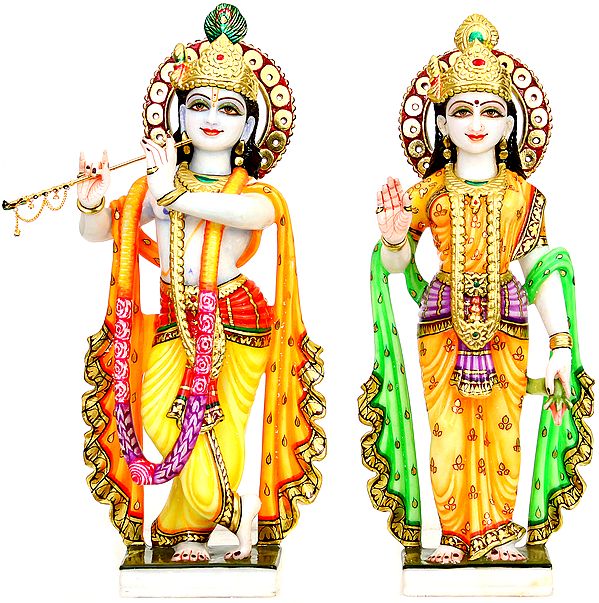 Free delivery
The timeless images of the timeless deities, chiseled independent but bound one to other with immortal ties – metaphysical and mythical, out of the finest quality of white marble not revealing a discolouring grain, or a knot or vein in the stone’s texture, represent the divine lovers Radha and Krishna. Metaphysically the Creation consists of ‘matter’ and the ‘enlivening self’ often defined as ‘prakriti’ and ‘purusha’ perceived in Vaishnava tradition manifesting as Radha and Krishna, and in Shaivite, as Shakti and Shiva. In the entire body of Vaishnava mythology Radha and Krishna are celebrated as the ultimate models of love – sensuous or spiritual but essentially divine, a large section of medieval texts – Puranic or literary, thriving with annals of their love. Almost in the entire medieval art : painting or sculptures, the joint representations of Radha and Krishna portray the divine couple in one of the amorous modes usually Krishna, as seated or standing, holding in his left arm Radha, enthralled in his love, seeking support in his bosom.

Far different from above, completely puritan these images of Radha and Krishna, conceived on votive lines, are essentially transcendental. Revealing a different kind of divine aura they are obviously meant for a shrine : domestic or public. Radha, conceived in Vaishnava tradition for representing the amorous aspect of primordial female energy, has been portrayed in this marble image standing in Lakshmi-like formal posture, revealing grace but not amour, sustaining by her benevolence the entire creation. Hence, like Lakshmi she is holding her right hand in ‘abhaya’, a posture of protection and thereby to sustain, and is carrying in the left, a lotus, Lakshmi’s essential attribute. Her towering crown with a large ruby in the centre, style of ensemble, especially the sash laid as in the iconography of Lakshmi and great queens, first over the arms and then flanking on either side trailing down to the ground, its saffron dye with borders defined in gold and a rich waist-band in lustrous purple, all are close to Lakshmi’s form.

The posture of the eyes as supervising the earth essentially links the represented image with Radha portraying her concern for the earth and its inhabitants. The tradition perceives Radha as the sojourning self striving to unite with the Supreme Self that is Krishna. Thus, not merely concerned, Radha represents the earth and every self sojourning on it. Contrarily, Krishna’s eyes are upwards raised underlining Krishna’s distinction as the unearthly entity : Supreme Self. The artist by so blending with his form of Radha the aspect of Lakshmi seems to have aimed at multiplying the image’s divine aura for in her form as Radha she is essentially the ultimate model of love, and in her Lakshmi-like aspect she is the benevolent sustainer. Krishna is in his usual 'tri-bhang’, a three curved body posture, which is interpreted as his form pervading all three cosmic regions, the earth, the sky and the netherworld. In his hands he is carrying his most loved flute by the melody of which he drags the minds away from worldly temptations and lead to the path of redemption but the rapture that reflects on the faces of his images emitting the divine melody from their flutes is missing in this statue. Here his form is rather stoical.

These images, exceptional in their meaning, contextual breadth and divine aura, are outstanding also in their finesse, plasticity, modeling, precision, figural balance, artistic merit and worth. An example of rare skill, not only the deity-figures have been laid and balanced on relatively small pedestals but as skillfully are annexed to them the end-parts, usually mere corners, of the sashes of the two figures flanking on sides. Not like reliefs with back-support, all parts, even the thinly conceived sashes, crown-rings – ‘prabha’, Krishna’s peacock-feather and Radha’s crest, are chiseled by themselves without a base to hold and support, something like a metal-cast. The peacock feather comprising the crest of Krishna’s crown has been not only beautifully chiseled but as beautifully painted. With large eyes, round faces, fine features, tall necks and broad foreheads the figures have a highly balanced iconography; however what imparts to the statues rare quality and accomplishment is their painting part which attributes to stone the transparence, lustre and a touch of delicacy that are the properties of the finest silks and the gold-like rich metals.