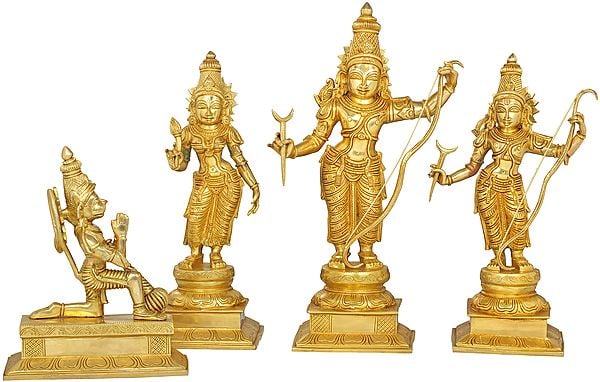 This sculpture represents the complete Rama Parivar- Lord Rama, Lakshman, Mata Sita and Lord Hanuman in their act of blessing the devotees of positivity by their presence. This divine darbar is symbolic of YOU and your own complete self, as we have several parts of ourselves- the mind, the body, the intelligence and soul.

Laxman represents the body, as he is strong and is ever ready to act as per Rama’s wishes; our intellect is the pure buddhi closest to the soul represented by Sita as she is completely surrendered to Rama; Hanuman, who is sitting in devotion at the feet of Lord Rama and Sita represents our mind, as our mind is the silent serviceman to intellect and soul, just as Hanuman to Rama and Sit; our soul which is the ruler of the mind, body and intellect is represented by Lord Rama himself, the king of infinite potential. Just as body, mind and intellect integrate in presence of soul, similarly Laxman, Sita and Hanuman are connected because of Rama.

Here all the deities reside on lavishly carved lotus pedestals in superbly folded ankle length dhotis. Their alluring ornaments and the beautiful crowns remind us of the long and expansive structures of mesmerizing South Indian temples; complexioned in a bright golden-yellow shade, Rama and Laxman hold a bow and arrow respectively in their hands, while Sita, being an avatar of Laxmi carries a lotus in her right hand and Lord Hanuman is shown paying obeisance to this divine couple and holds his sacred weapon gada in his hands.