An Introduction to Madhubani Paintings

Hindu women who live in villages near the market town of Madhubani in northern India maintain old traditions and teach them to their daughters. Painting is one of the traditional skills that is passed down from generation to generation in the families of some of the women. They paint figures from nature and myth on household and village walls to mark the seasonal festivals of the religious year, for special events of the life-cycle, and when marriages are being arranged they prepare intricately designed wedding proposals.

But even though women in the villages around Madhubani have been practicing their folk art, for centuries, the world at large has come to know about these women and to consider them to be "artists" only in the last thirty years. Even now, most of their work remains anonymous. The women, some of them illiterate, are in any case reluctant to consider themselves individual producers of "works of art" and only a few of them mark the paintings with their own name.

Among the first modern outsiders to document the tradition of Madhubani painting were William and Mildred Archer. He was a British civil servant assigned to the district during the colonial era. The Archers obtained some drawings on paper that the women painters were using as aids to memory. Works that the Archers collected went to the India Records Office in London (now part of the British Library) where a small number of specialists could study them as creative instances of India's folk art.

What led the women painters to share their work with the larger world was a major ecological and economic crisis that resulted from a prolonged drought in 1966-68 that struck Madhubani and the surrounding region of Mithila. In order to create a new source of non-agricultural income, the All-India Handicrafts Board encouraged the women artists to produce their traditional paintings on handmade paper for commercial sale. Since then, painting has become a primary source of income for scores of families.

Production and initial marketing have been regulated by regional craft guilds, the state government of Bihar, and the Government of India. But the continuing market in this art throughout the world is a tribute to the resourcefulness of the women of Mithila who have successfully transferred their techniques of bhitti chitra or wall-painting to the medium of paper, and have resisted the temptation to adapt their traditional designs too freely in pursuit of unpredictable public tastes.

The paper itself is handmade and treated with cowdung and the colours used are extracted from vegetables. People of Mithila have their own language and a sense of regional identity that goes back more than 2500 years. Among the most celebrated figures believed to have been born in the region are Mahavira (a great spiritual hero of the Jain religion), Siddhartha Gautama (better known to the world as the Buddha), and Sita (the legendary wife of Prince Rama and herself a central figure in the world's epic the Ramayana).

The Region of Mithila Near the India-Nepal Border Commercialization of the folk art has been a mixed blessing. It has been regulated by governmental bureaucracies, has generated a multi-levelled distribution system, and has put a premium on productivity per se - independent of any meaningful connection to the traditional cycles of village life and the rhythms of the religious year. But it also has allowed people around the world to discover a style of art with a long heritage linked to the lives of women, and that retains evident signs of its rootedness in a vital folk tradition. And, more to the point, it has created a new source of gainful employment in rural India for women and their families. The exhibited paintings include examples of several themes in the representational but stylized and symbolic Madhubani tradition - the great life-cycle rite of marriage; some of the major goddesses and gods of the Hindu pantheon; domesticated and wild animals. 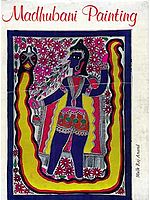 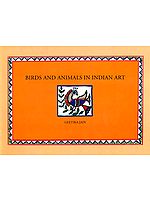 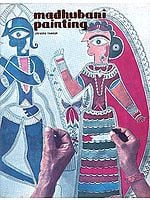 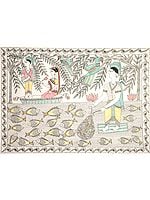 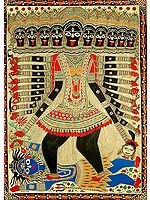 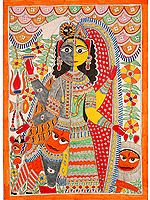 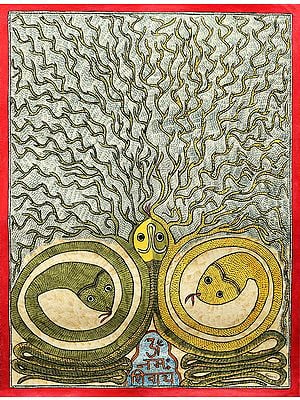