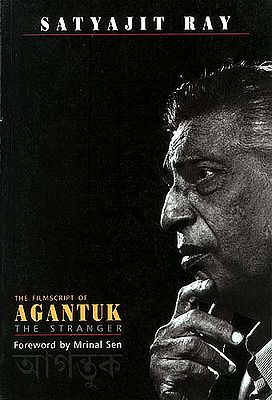 $13.50
Notify me when this item is available
Save to Wishlist Send as E-card Share by Email
Excerpts From Reviews:

Agantuk is a delicious story of a stranger appearing as a mystery guest in the home of a family of three - a man, his wife and their son. While the man and the woman are worried about the guest's identity and the boy becomes his gleeful companion, the friends of the family, for no discernible reason, are out to teach him the lesson of a lifetime. With no high drama, but with Ray's inimitable play of wit and humour, the visitor's identity is eventually revealed. In the process, some f the characters are outsmarted, and the globe-trotting stranger walks back into his world, perhaps to continue the journey which he had started thirty-five years ago - in the year that Ray made Pather Panchali...

This written script will be an essential guidebook for researchers and viewers... This is a literary text, and is hugely readable.

I Could not have made Agantuk thirty-five years ago, in the days of Pather Panchali, and in the years that followed.. Only in my last three or four films have I tried to project myself through my characters - my personal views, my private faith and a philosophy of my own. Like I have done this time in Agantuk. And, yes, I made this clear to Utpal and asked him not to forget that he would have to act as my spokesman.

Satyajit Ray Three Movie Pack: Agantuk (The Stranger), Ganasatru (An Enemy of the People), Ghare-Baire (The Home And the World) (Set of 3 DVDs with English Subtitles)
$30.00

Agantuk The Stranger by Satyajit Ray (DVD with English Subtitles)
$24.00