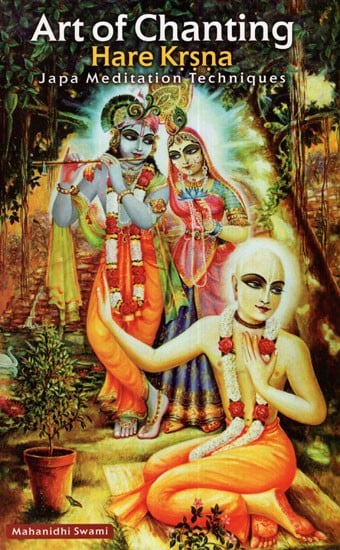 The Vedas proclaim that chanting the transcendental names of God is the maha-sadhana, the best and only yoga practice for this dark age of conflict, wherein terror and tension prevail. There can be no peace or harmony in the world unless the people of all nations garland their hearts with the holy names of God.

The Vedas proclaim that chanting the transcendental names of God is the maha-sadhana, the best and only yoga practice for this dark age of conflict, wherein terror and tension prevail. There can be no peace or harmony in the world unless the people of all nations garland their hearts with the holy names of God. Throughout the centuries, all divine masters have taught the same principle-praise the Lord by singing and chanting His holy names. Such praise will pacify the mind, cleanse the heart of lust, anger and greed, and surcharge the soul with joy.

In 1971, during a conversation in London, Srila Prabhupada said, “The whole world is suffering for want of God consciousness. So it is the duty of all religious sects to teach this simple art of chanting Hare Krsna.”

Srila Prabhupada practiced what he preached by performing nothing short of a miracle. In just eleven years, Srila Prabhupada personally introduced the Hare Krsna maha-mantra in every major country of the world. By taking up this “maha yoga sadhana” of chanting Hare Krsņa, millions of suffering souls have found relief, peace, fulfillment and inconceivable happiness.

Chanting the Hare Krsna maha-mantra is the quickest and easiest way to realize God and attain perfection in life. It is so simple that even a child can chant. Nevertheless, sadhakas (practitioners) often face obstacles while chanting Hare Krsna. Inattention, lack of taste or attraction for chanting, and wandering minds are the common complaints.

The Art of Chanting Hare Krsna addresses these problems by explaining the science of mantra yoga, and by giving practical suggestions for improving concentration and controlling the mind. Many interesting japa meditation techniques are described in Chapter Eleven and throughout the book. One will quickly attain a strong attraction and taste for chanting the Hare Krsna maha-mantra by adopting these helpful techniques.

Over the last twenty-five years, disciples of Srila Prabhupada have produced several wonderful books about the holy name. Each one is a direct manifestation of Lord Gauranga's mercy. The first wave of mercy appeared as Satsvarupa dasa Goswami's Japa Reform Notebook. Subhananda dasa then collected many waves of mercy from Srila Prabhupada's nectarean statements about the holy name in a book titled Sri Namamrta. Finally the mercy swelled in all directions to appear as The Nectarean Ocean of the Holy Name, recently released by Sacinandana Swami. The printed glories of the holy name began as a wave; turned into nectar; expanded to an ocean; and finally transformed into an art-The Art of Chanting Hare Krsna.

This book contains more than a 108,000 words praising the Hare Krsna maha-mantra. Upon reading this, someone might ask, “Why so many words to describe such a small mantra? After all, there are only sixteen words in the maha-mantra.” Lord Krsna's holy name is infinite and completely transcendental. Not even for one second does it ever appear the same. From moment to moment, the holy name continually expands in newer and newer forms, flavors, and features. A thousand books and a billion words could never portray the boundless glories of Krsna's holy name. If the Lord Himself as Ananta Sesa tries to recount the glories of the holy name with His thousand mouths, even He will fail to describe the matchless splendor of the Hare Krsna maha-mantra.

The author prays to Srila Prabhupada, to the merciful acaryas in the parampara, and to the most benevolent Lord Gauranga to bless this work, and accept it as another small wave rising from the ocean of their causeless mercy. May this book help the devoted readers increase their attachment to chanting the ever-sweet names of the Lord, and quickly attain the perfection of life, Radha-Krsna prema. 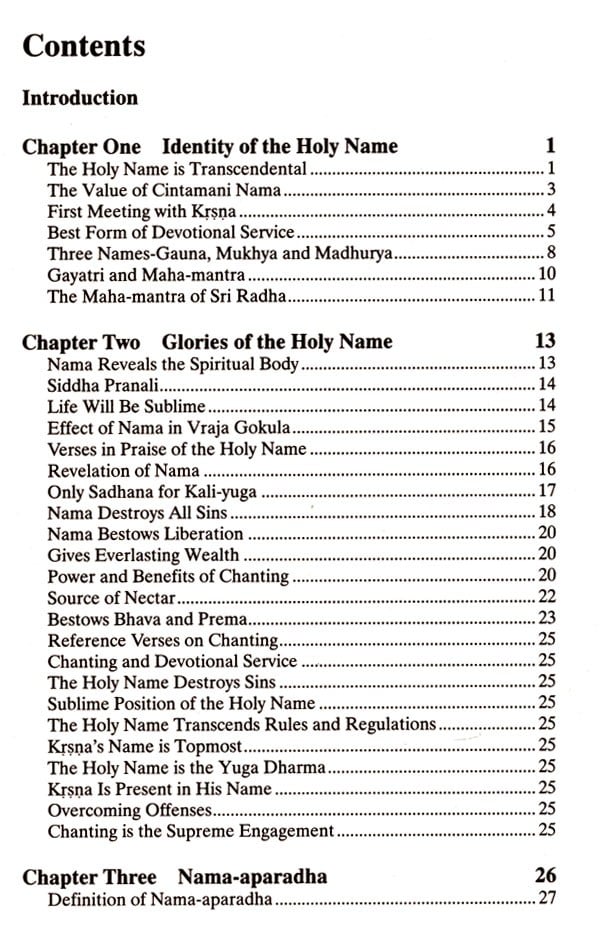 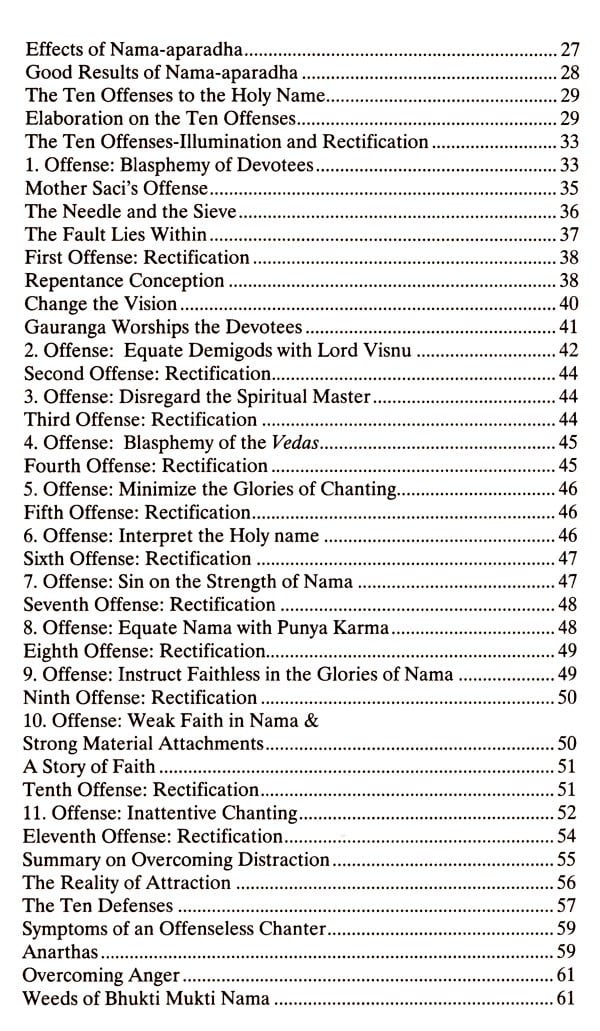 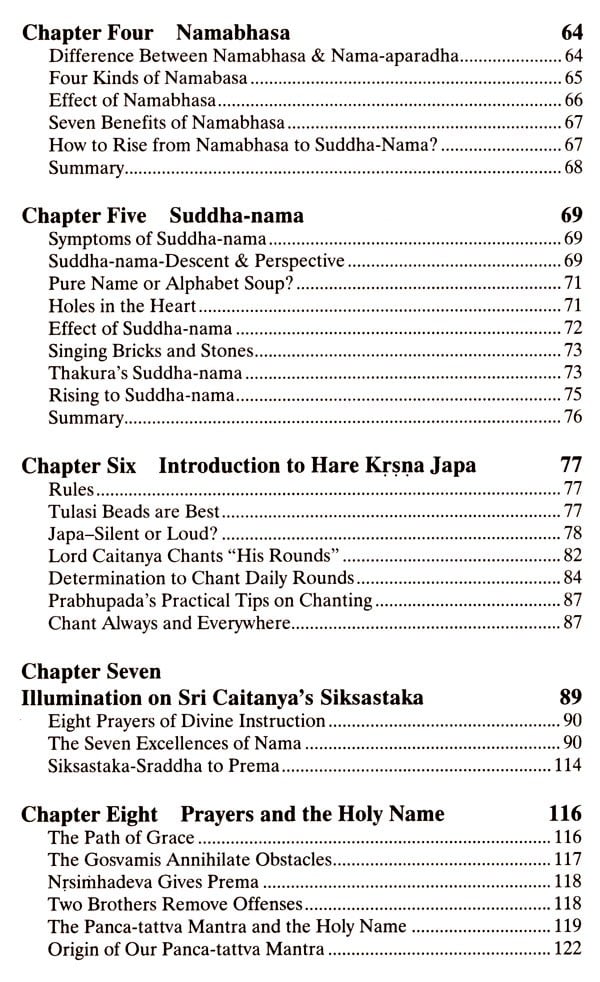 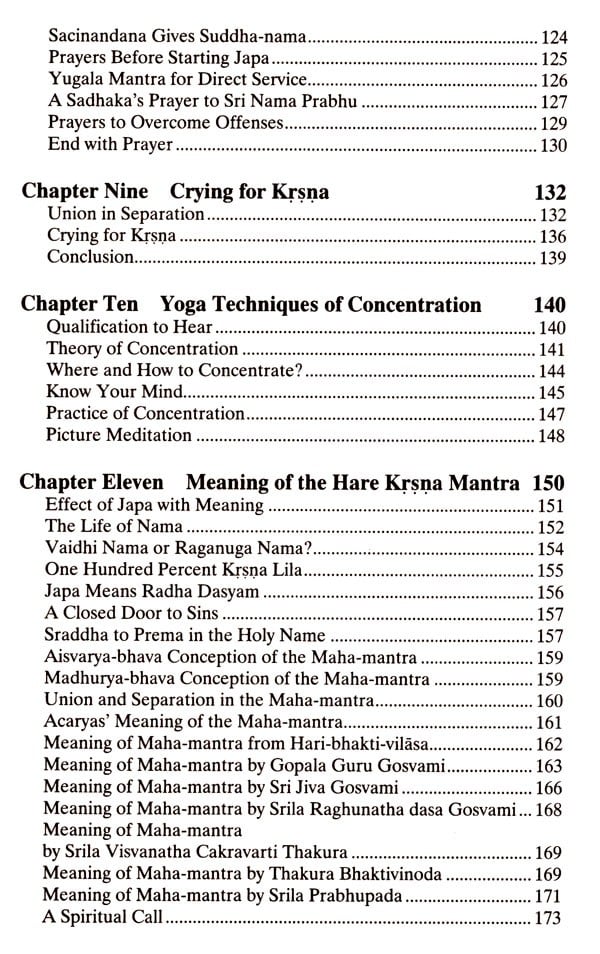 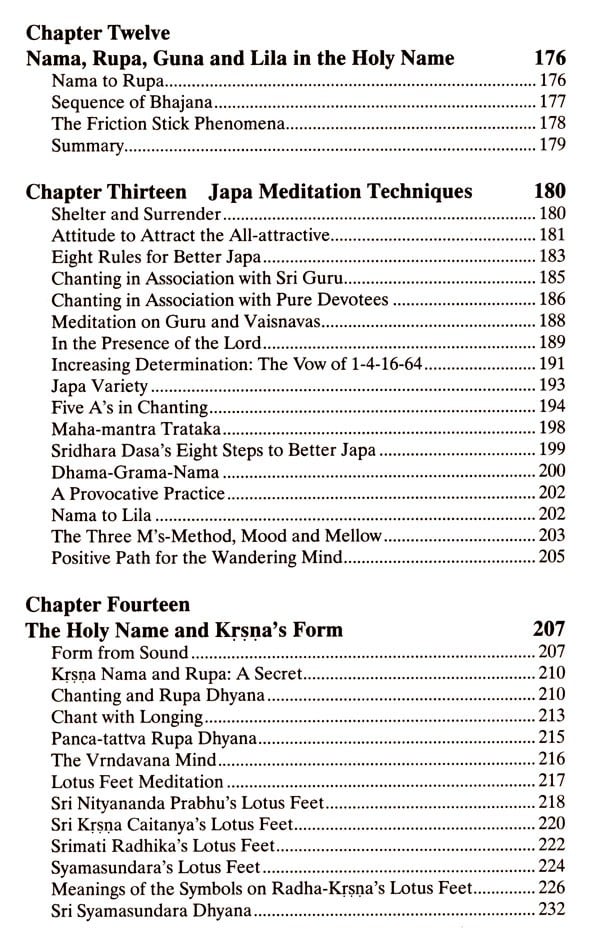 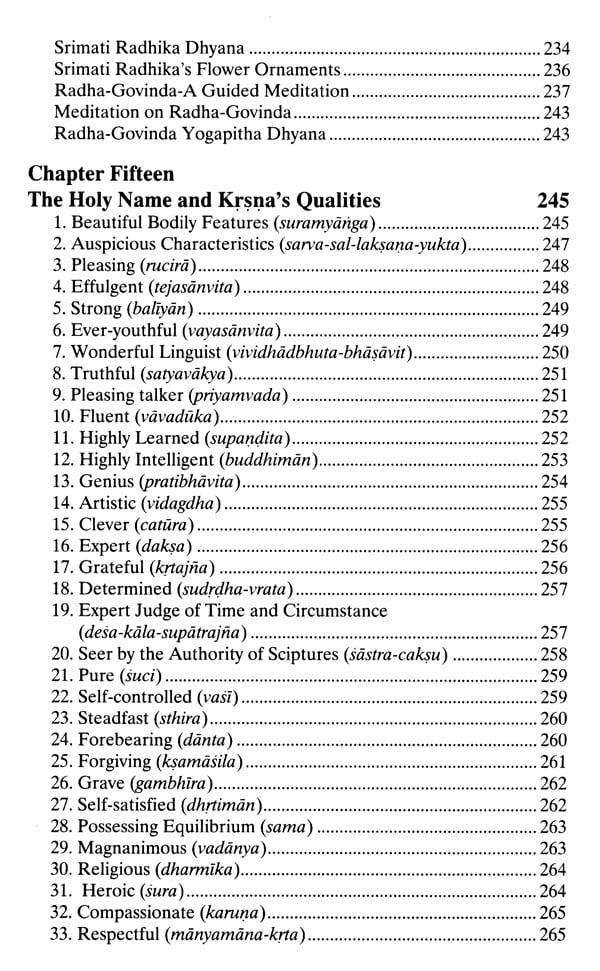 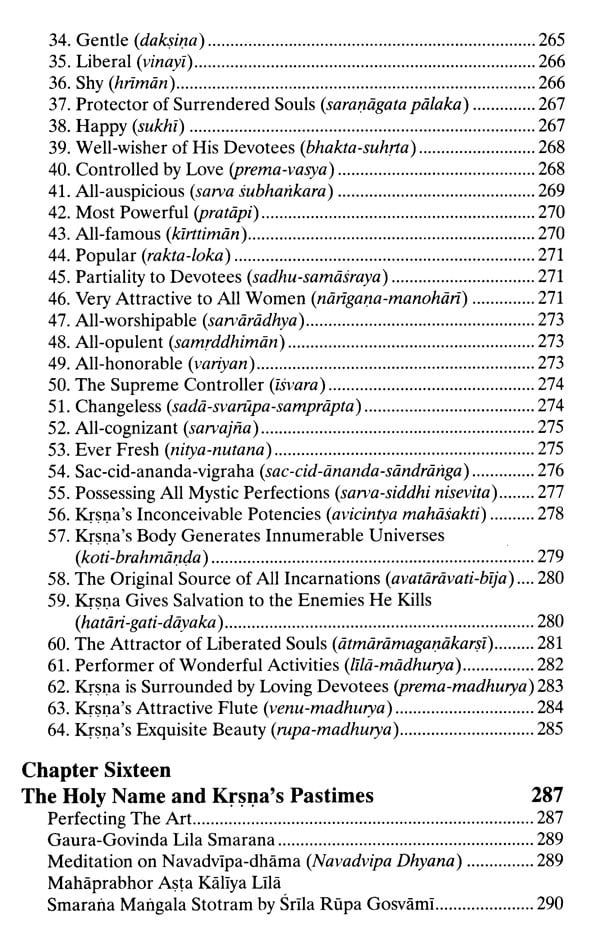 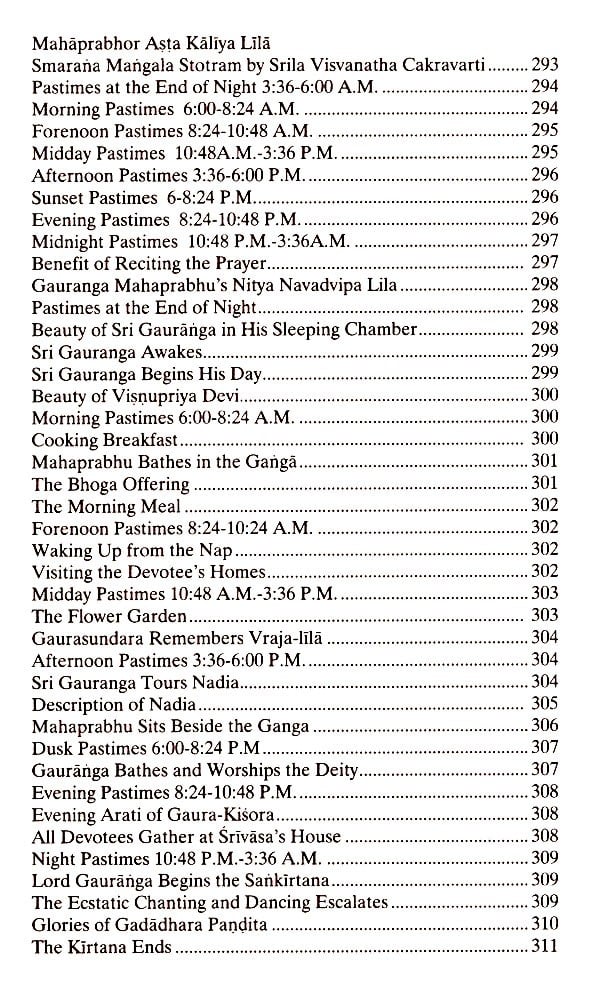 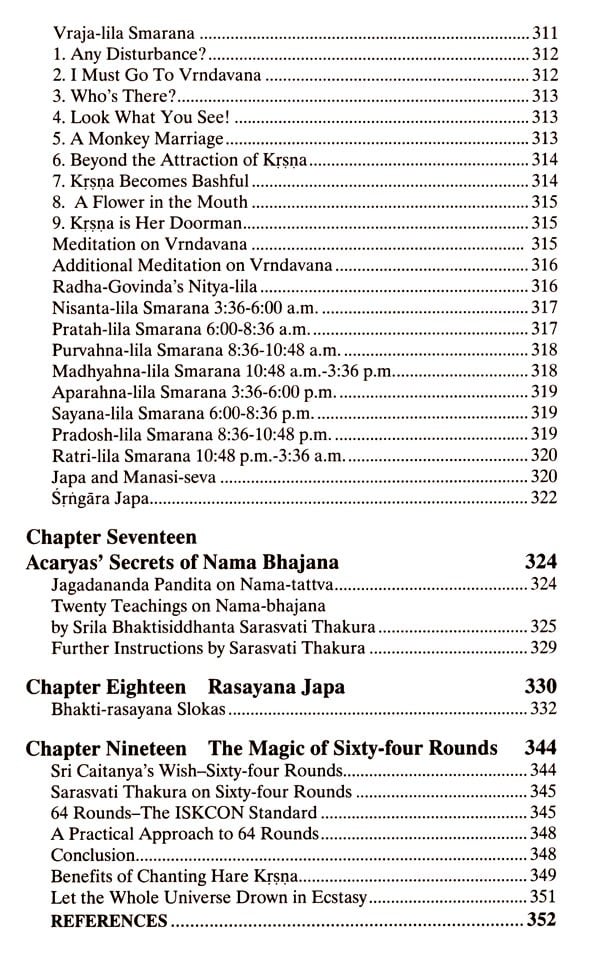 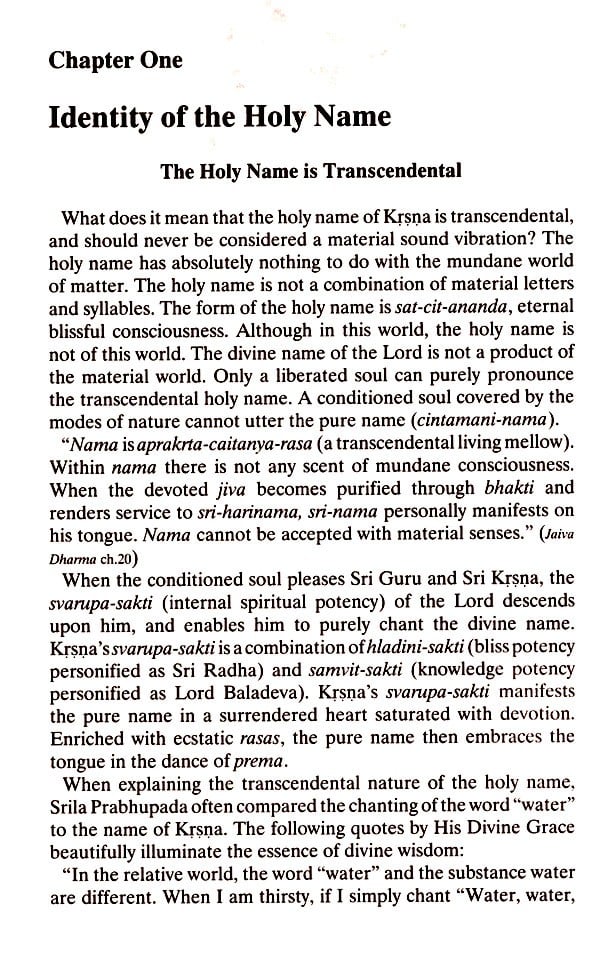 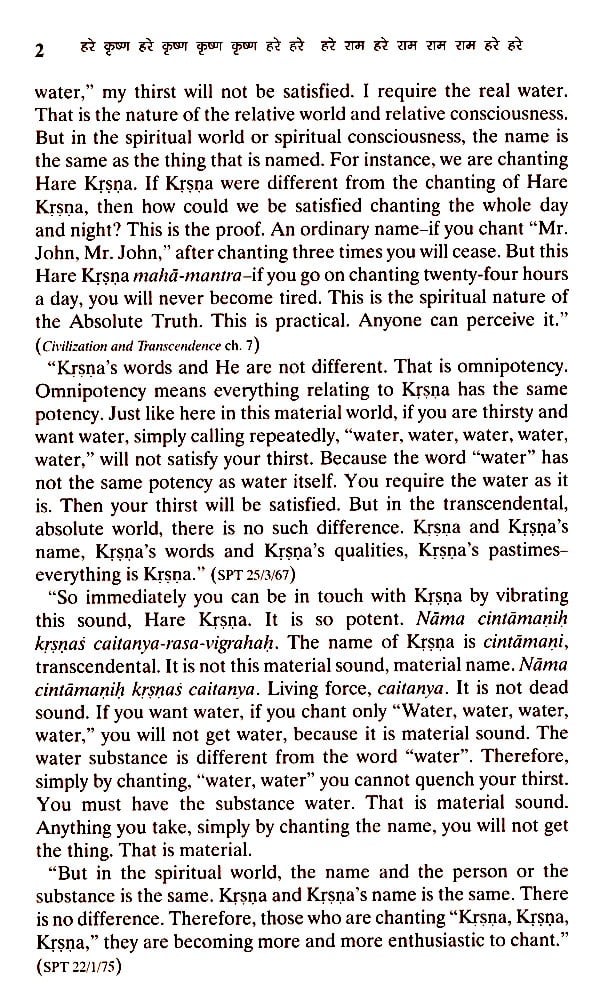 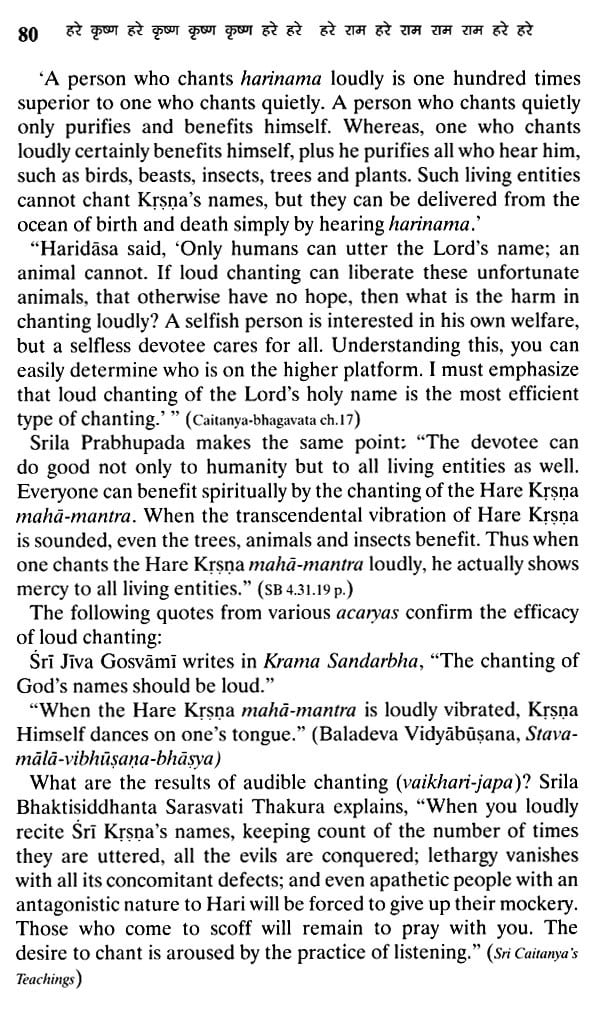 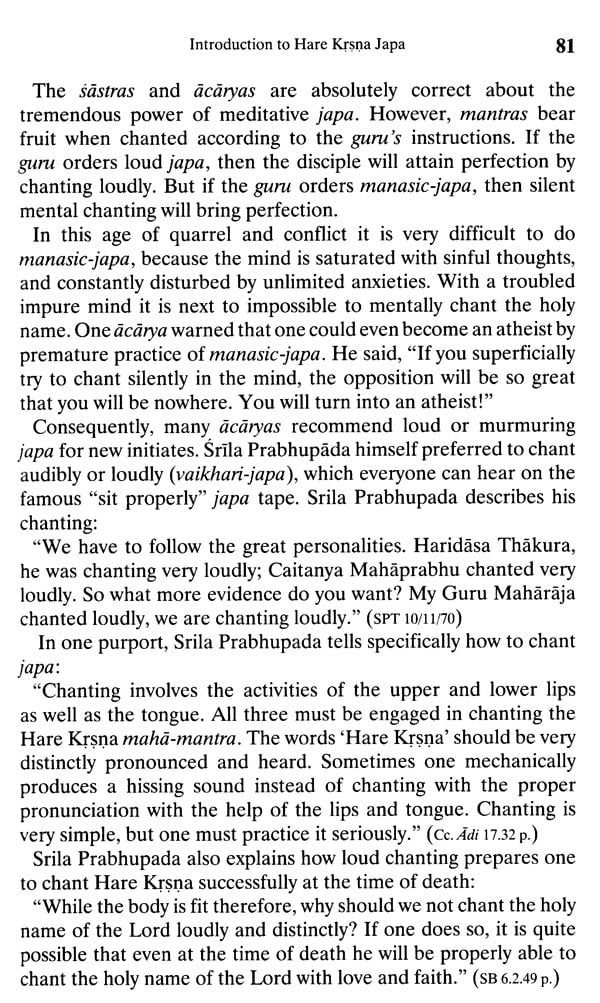 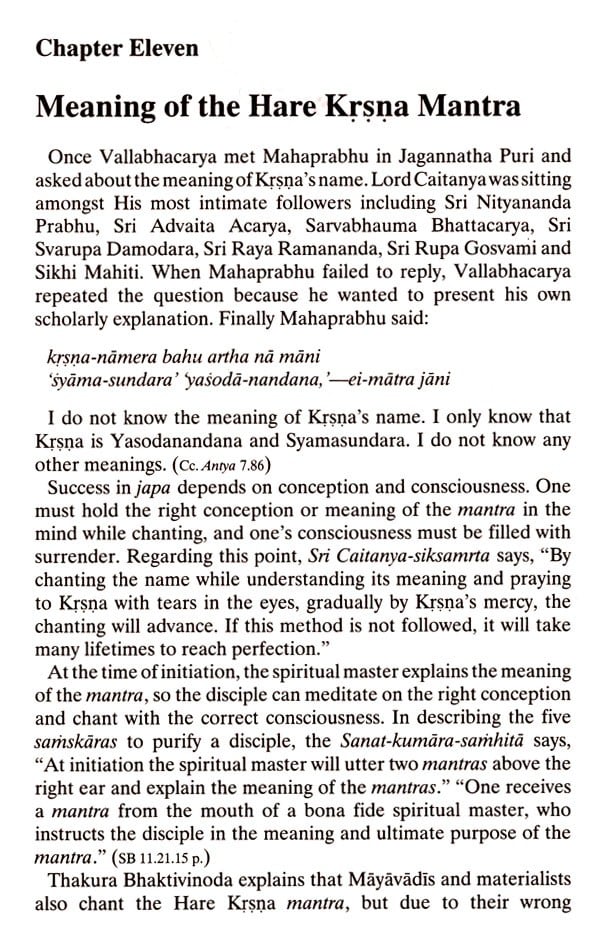 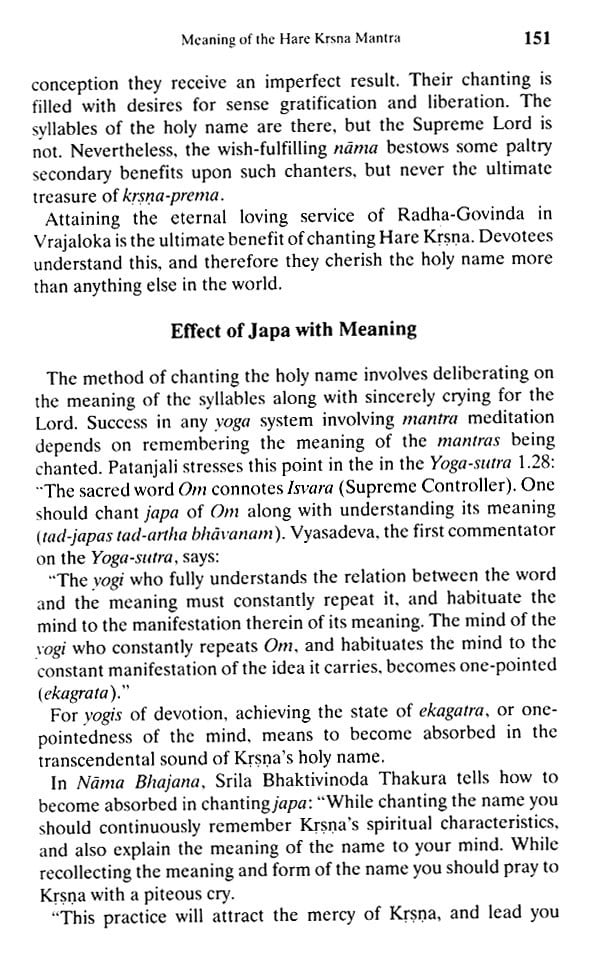 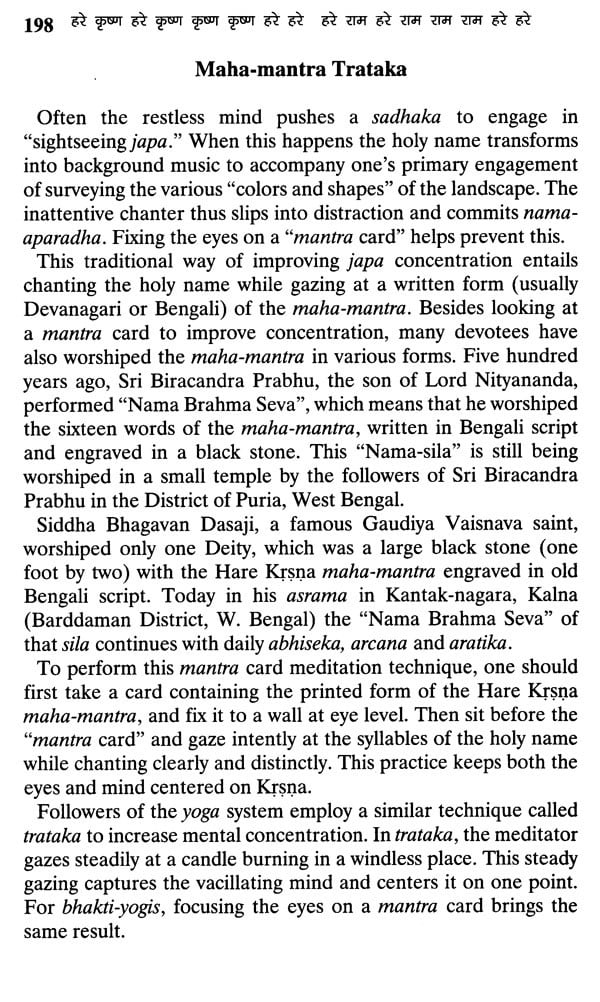 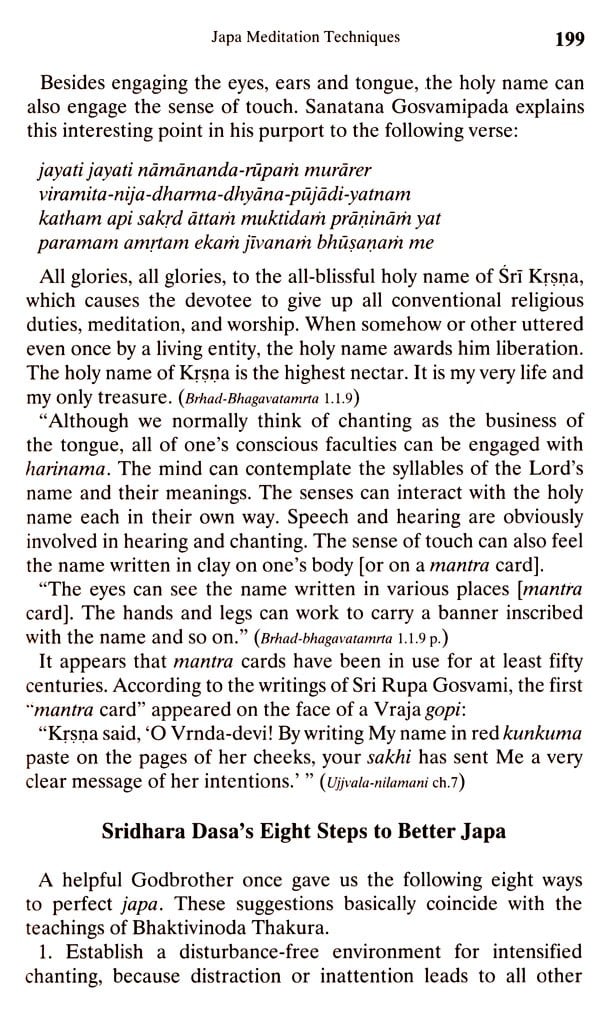 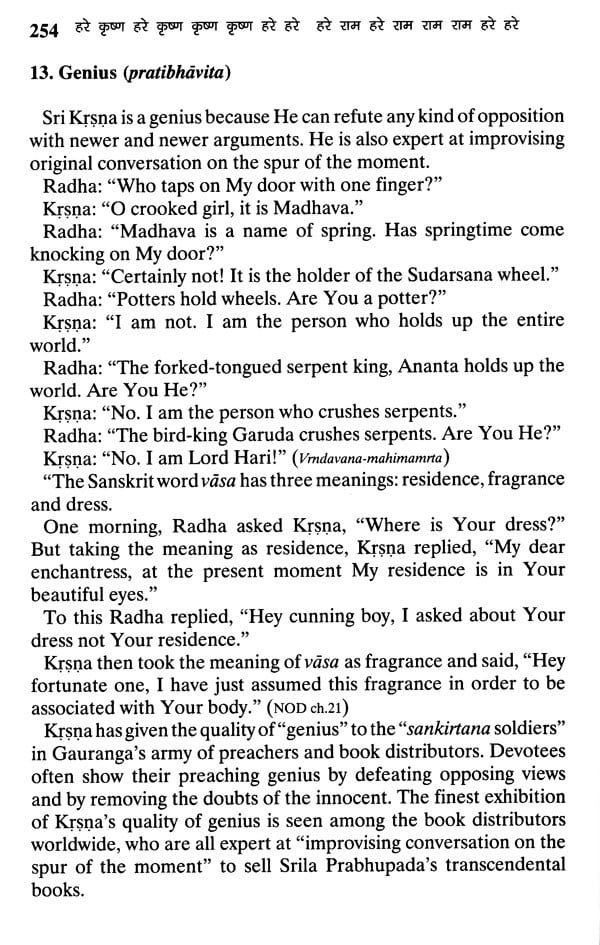 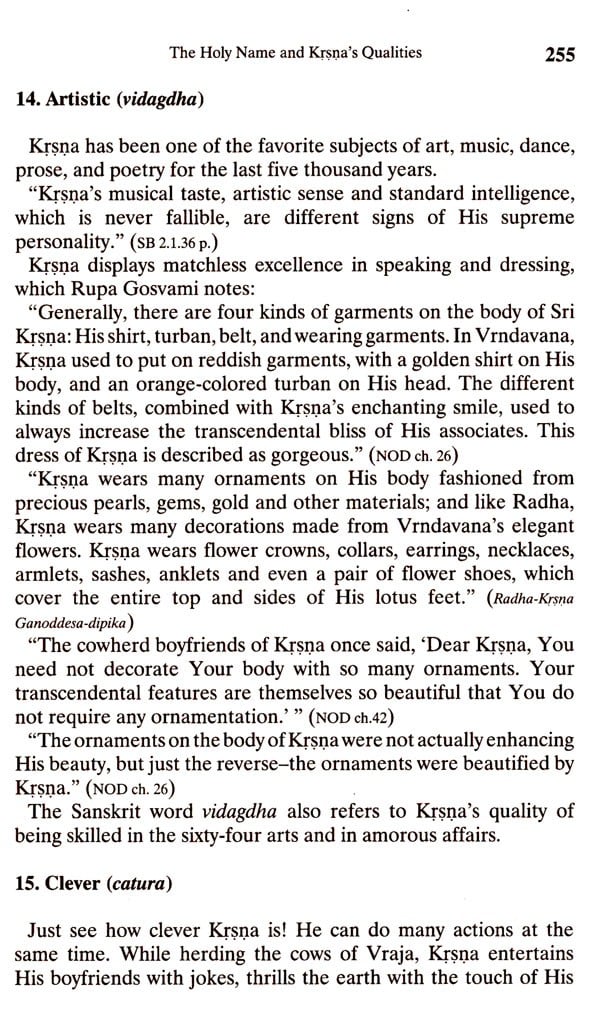