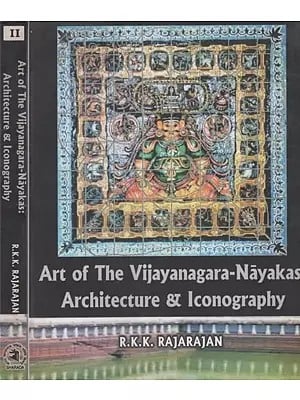 Art of The Vijayanagara-Nayakas: Architecture & Iconography (Set of 2 Volumes)

The doctoral thesis "Art of the Nayakas" (title altered in publication) by R.K. Kesava RAJARAJAN is a very serious effort to put some order in the great deal of monuments belonging to a period, which is too often underestimated by the scholars. The work contains both a survey of the temples and an analysis of iconographical themes. The painstaking examination of original sources is perhaps the most important contribution by RAJARAJAN, but also the chapter "Paradigms of Nayaka Art" is extremely useful as it takes into consideration and systematically discusses most of the features characterizing Nayaka temple architecture [...] The scholar is right in stressing the importance of the changing European taste in the evaluation of Indian art [...] the material collected is impressive, the references to the literary tradition are vast and exhaustive. the iconographical interpretations are well-grounded and rich in detail [...] It is my opinion that, once it is published, it will remain for a long time a fundamental reference book for Nayaka architecture and iconography.

Born in 1973 Dr. R.K.K. RAJARAJAN had his schooling and university education at Madurai and Thanjavur He did his M. Phil and Ph. D. under the inspiration of his father, Prof. Raju KALIDOS. Since a college student, his father trained him in Hindu iconography. The thesis was unanimously "Highly Commended by a board of experts, including Prof. Maurizio TADDEI. Taking the doctoral degree in 1989, he was conferred the prestigious Alexander von Humboldt post-doctoral fellowship and left for Germany in the same year. He worked for nearly three years in the Institute für Indische Philologie und Kunstgeschichte, at the Freie Universität Berlin, Berlin. He has attended several national seminars and an international conference at the University of Hong Kong. He has published a number of articles in international journals from Oxford, Rome. Naples and Berlin. Several more articles stand to his credit at home. Dr RAJARAJAN has visited Hong Kong, several places in Germany. England (London) and Italy (Rome). Presently he is teaching history at the Eritrean Institute of Technology, Asmara, Eritrea.

The present book on Art of the Vijayanagara Nayakas is a revised version of a doctoral thesis of the Tamil University of Thanjavur, submitted under the title, art of the Nayakas. The author, R.K Kesava RAJARAIAN, did his M Phil and Ph.D in the Department of Sculpture and Art History of the above University I am told the external expert, the Tate Prof Maurizio TADDEI (Dipartimento di Studi Asiatici, Istituto Universitario Orientale, Naples, formerly Editor, East and West, Rome) has highly commended the work.
Dr. RAJARAJAN has published several articles in international journals. His top ranking credit is the prestigious Alexander von Humboldt post-doctoral fellowship that he won and spent at the Institut für Indische Philologie und Kunstgeschichte, Freie Universität Berlin, Berlin (1999-2001) He worked under the tutorship of the eminent art historian Prof. Adalbert J. GAIL The German institute is noted for the outstanding association of eminent scholars (Herbert HARTEL, Claus BRUIN, Helmut NESPITEL, Joachim K. BAUTZE and Harry FALK), RAJARAIAN spent more than two years at the institute, working on the Ramayana Paintings of the Tirugdkarnam Temple, another book expected to be published shortly. He has been appointed Assistant Professor in History to work at Eritrean Institute of Technology (EIT), Asmara, Eritrea (near Egypt).
The author completed his doctoral work in two years during 1996-98. The topic is unwieldy for a doctoral thesis since the Nayakas reined from coastal Karnataka (Bhatkal and Keladi-Ikkeri) to the Bay of Bengal (Tancavür), others posted at Maturai and Cenci. Their temples are spread over in all those regions where Vijayanagara monuments could be found RAJARAIAN has listed not less than 200 Nayaka temples from a study of inscriptions and contemporary Sanskrit and Tamil literature. Of these he has selected 26 temples, evenly distributed over four provinces, viz., Maturai, Tancavür, Cenci and Kejadi-Ikkeri He has surveyed the tremendous collections in the Shimoga museum, mostly registering Nayaka specimens. Prof. TADDEI has rightly stated that the author has almost exhausted all the available sources to trace the history of the temples. He has visited the field with assistants to make scientific plans of the temples. Himself a good photographer, his collections on Nayaka art are immense.
The book is in five chapters with a separate volume for photographic illustrations Of the five, the fourth on iconographical themes takes the lion's share. There are annexes on max and iconographic programme in a tér (temple car). The bibliography is exhaustive as it included his collections in Germany I am told the author has xeroxed almost all available materials down to 2001. The photographic collections are in both csir (Pls 1 to 128) and black & white (Pls 129 to 340). We get a panoramic account of the art of the Nayakas in this important book by RAJARAIAN.
The Nayakas were successors of the Vijayanagara rulers and so they could by all means be called Vijayanagara Nayaka. When pressure mounted on the Empire. Krsnadevaraya with a historical foresight and far sight appointed the Nayakas at various gubernatorial circles to take care of administration and the patronage of temples. After the eclipse of the Aravidu dynasty, the Nayakas declared their independence. Therefore, actually speaking the art of the Nayakas is only a continuation of the Vijayanagara tradition DI RAJARAJAN has presented a capsule history of the fout Nayaka families in the first chapter Further, he defines the scope of his study, its delimitations (why select 26 temples only?), earlier works done and points out the steps for future projects on Nayaka art. To our knowledge. there is no separate work on Nayaka art. The artistic phase of the Nayakas is mostly a blank space, save a booklet by A SUNDARA on the Shimoga Museum George MicHILI, has recently come out with a book on the later phase of Vijayanagara under the New Cambridge History series His title is Successors of Vijayanagara and not Nayaka Another British scholar, Crispin BRANPOO1, has worked on the art of the Nayakas of Maturai The colleagues of RAJARAIAN (Jeyapriya and Gopalakrishnan) have contributed articles to international journals The major project on Nayaka art is by RAIARAIAN. It fulfills a long-felt need on Nayaka art.
The second chapter traces the history of the Nayaka art from a survey of epigraphical and literary sources It examines traditional registers such as the Köyiltiruppanimalai of Maturai and Koyiloluku of Srirangam These books attest the fact that though these temples claim hoary antiquity since time immemorial (atleast the 5th century AD or earlier) but most of the existing structures are of the Vijayanagara-Nayaka period Of the 75 patrons listed in the Köyiltiruppanimalai, excepting the mythical founders like Indra and few Pandya rulers, majority of them are of the Vijayanagara-Nayaka period.
The third chapter presents a kaleidoscopic explanation of the architectural framework of the selected temples What was once a cella and mandapa to make up a Hindu temple (e.g. Käsivisvanatha at Pattadakkal or Mukunda Nayagar at Mamallapuram) by about the time of the Nayakas had become a macro with so many präkäras, gopuras, mandapas (100 or 1000 pillared), subsidiary chapels, main vimanas, vahanas (ter), tirukkujams (tanks) and so on. Each temple of the Nayaka time is a treasure house of architecture and iconography Dr. RAIARAJAN within a short span of time has studied 26 temples, which is indeed commendable. He discusses all aspects of the architecture of the various units of the temples in a chapter.