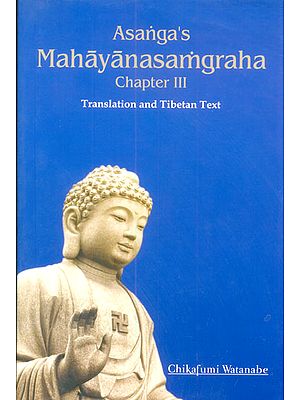 $31.00
FREE Delivery
Quantity
Ships in 1-3 days
Notify me when this item is available
Post a Query
About the Author

Chikafumi Watanabe received his MA form the University of British Columbia and Ph.D. from the University of Calgary. His primary research interest is Mahayana Buddhism. He teaches religion and related subject at Osaka University. He has edited Samskrta-Sadhuta, Goodness of Sanskrit: Studies in Honour or Professor Ashok Aklujkar (2012).

Mahayanasamgraha is one of the most important texts of the Yogacara School of Mahayana Buddhism. In this text, its author, Asanga, developed and system-atized the Yogacara philosophy and praxis.

This volume presents an English translation of Mahayanasamgraha’s third chapter which discusses the bodhisattva’s entrance onto the defining characteristics of what is to be known, i.e. the realization of vijnapti-matrata. The translation is based on the Tibetan text edition by utilizing and consulting all available Tibetan editions-sDe dge, Co ne, Peking, sNar, thang, Taipei, Lamotte, Yamaguchi and Nagao. This volume also contains English translation and Tibetan texts of the selected passages in the commentaries of the text, i.e. Mahayanasamgraha-bhasya by Vasubandhu and Mahayana-Samgrahopanibandhana by Asvabhava. The translation of the text in this volume aims to advance a scholarly under-standing of praxis, and the relation of the practical and philosophical theories described in the third chapter of Mahayanasamgraha and its commentaries.

I hope that the translation of the third chapter of the Mahayanasamgraha in the present book will be a significant contribution to the study of Yogacara philosophy in general and of Asanga’s philosophy in particular.

I would like to think the Professor Leslie S. Kawamura of the University of Calgary, who patiently went through the entire translation of the third chapter of the Mahayanasamgraha and its commentaries with me. claryfing countless difficult passages. Without his encouragement and help, translation of the text simply could not have been completed.

I am indebted to Professors Tom J.F. Tillemans of the University of Lausanne and Shoryu Katsura of Ryukoku University, who were the Numata Chair of Buddhist Studies visiting profess-sors at the University of Calgary in 1995 and 1996 respectively. I was influenced much by their lectures on Yogacara epistemology and Madhyamika philosophy, etc. Also, Professor Katsura kindly gave me valuable suggestions in reading and translating the third chapter of the Mahayanasamgraha and its commentaries.

My special thanks are also due to Professor Lambert Schimithausen of the University of Hamburg for his valuable suggestion in reading and understanding some portions of the Mahayanasamgraha and its commentaries, and to Professor Michael Hahn of the Philipps-University of Marburg for his help ful suggestion in reading and understanding a verse quoted in the third chapter of the Mahayanasamgrahonibandhana.

I am grateful to Professor Karin Preisendanz, now of University of Vienna, who was my supervisor when I was a first year in the master’s programme at the University of British Columbia. I was given much useful information and helpful advice in her classes and in private consultations.

I also would like to acknowledge the generous advice and helpful discussion with Professor Shrikant S. Bahulkar of the University of Pune, who was a visiting professor at the University of British Columbia in 1993, on the Madhyamakahrdayakarika and Tarkjviala.

It was my good fortune to spend a year (December 1997-December 1998) in Pune, India. Professor Mohan G. Dhadphale of the Department of Sanskrit and Pail at the Fergusson College read Sanskrit texts with me and gave me much valuable advice in reading and understanding Sanskrit texts. Professor Saroja Bhate of the Department of Sanskrit and Prakrit at the University of Pune kindly allowed me to attend her lactures on Sanskrit vyakarana.

Study and research in India were made possible through a grant from the Government of India (GOI) through the India Studies Programme of the Shastri Indo-Canadian Institute (SICI). Neither the GOI nor SICI necessarily endorses, however, the views herein expressed.

Thanks are due to Nagoya University Association of Indian and Buddhist Studies, the Zengaku Kenkyukai of Hanazono University, and Nagata Bunshodo for their permission to reproduce my previously published translations of the Mahayanasamgraha.

Finally, I would like to express my gratitude to my mother for her constant encouragement. I believe that my late father, De. Fumimaro Watanabe has been protecting me with blessing of the Triple Gem throughout these years. 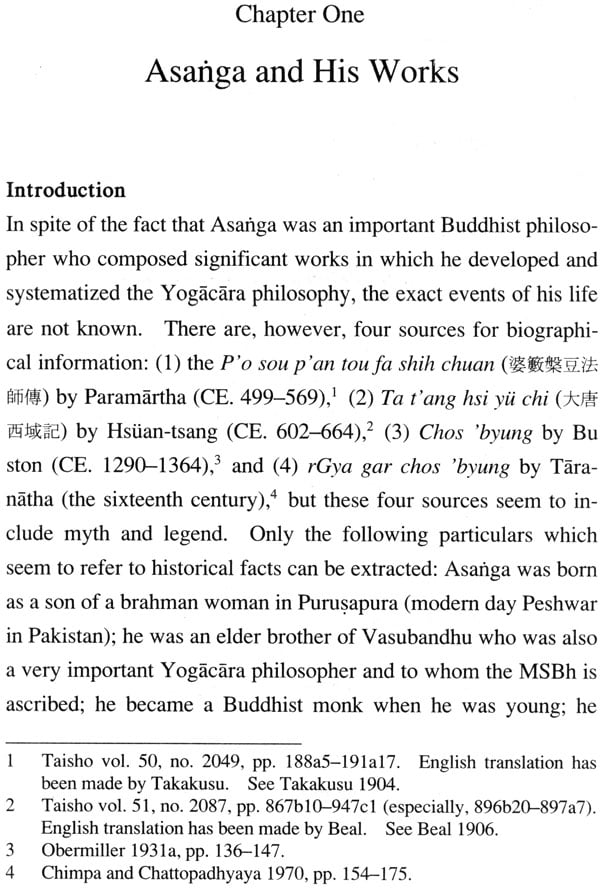 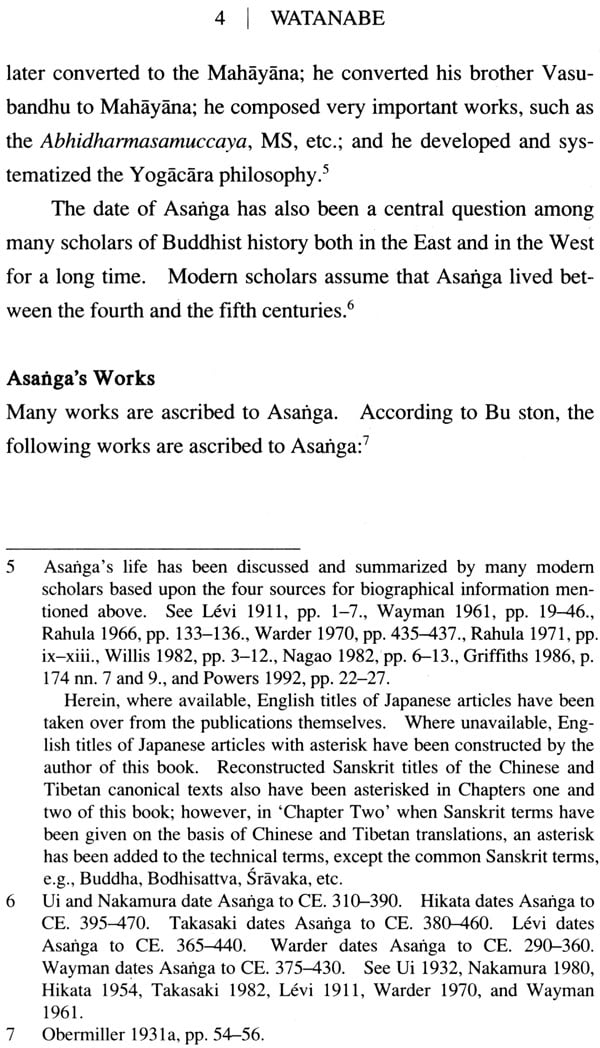 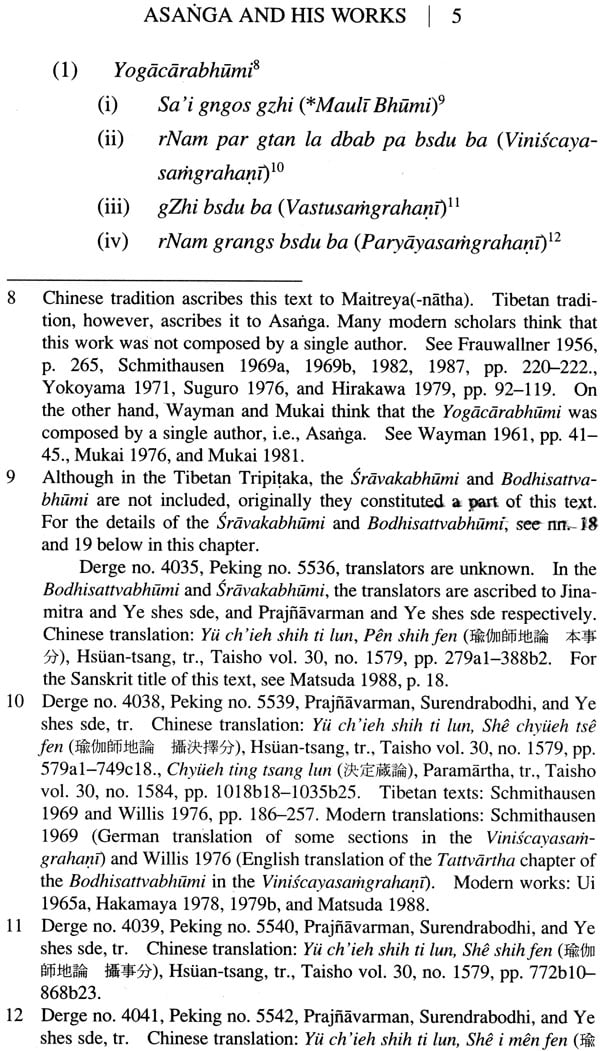 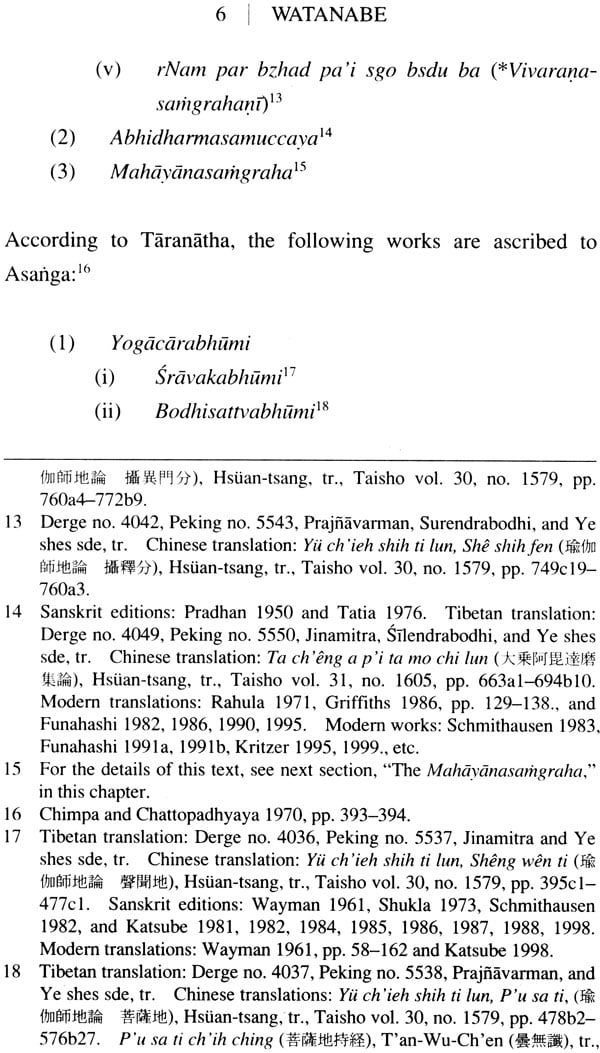 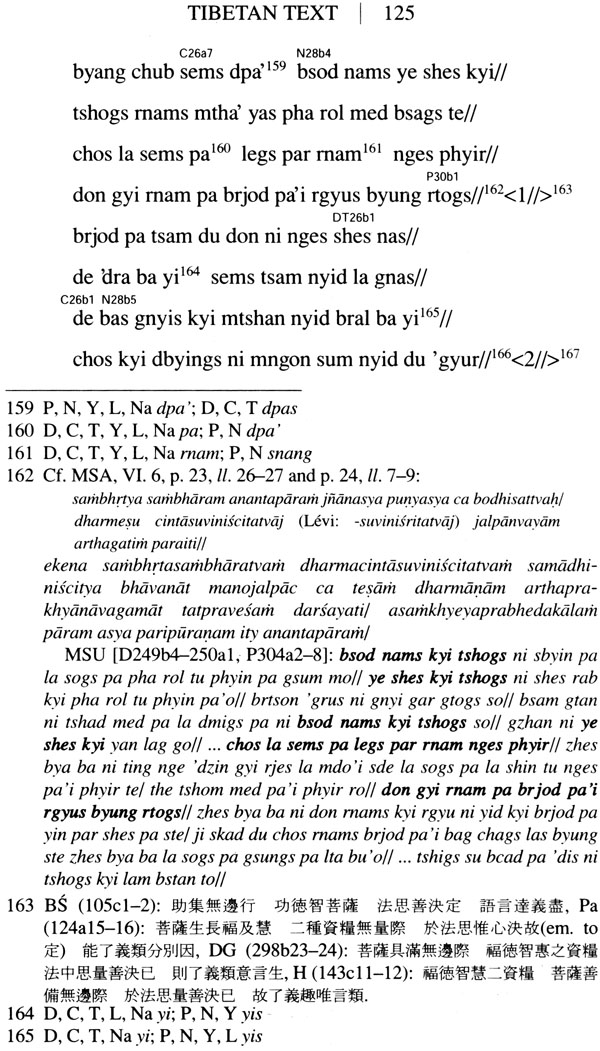 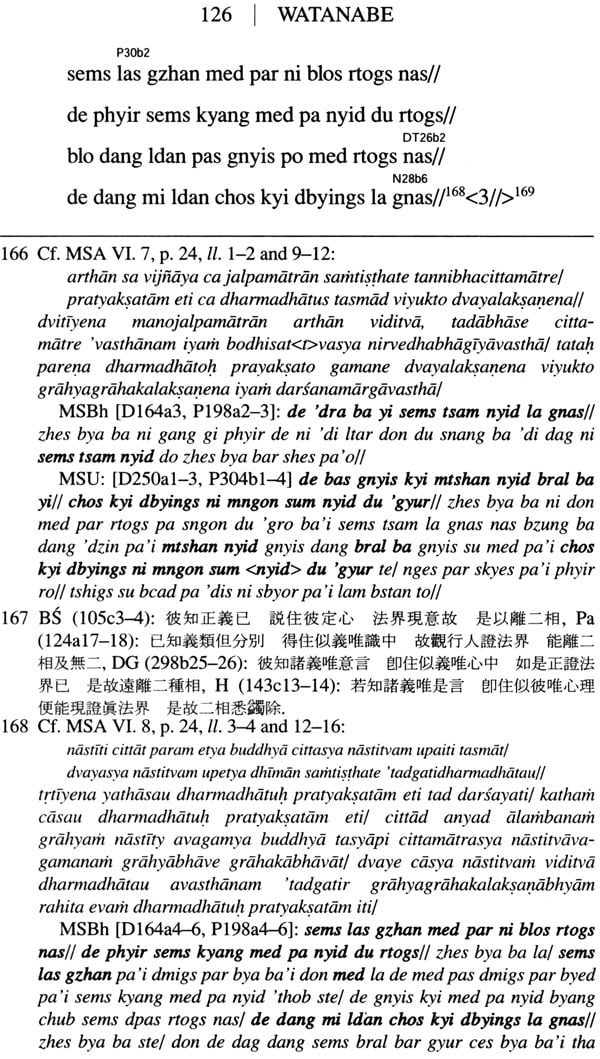 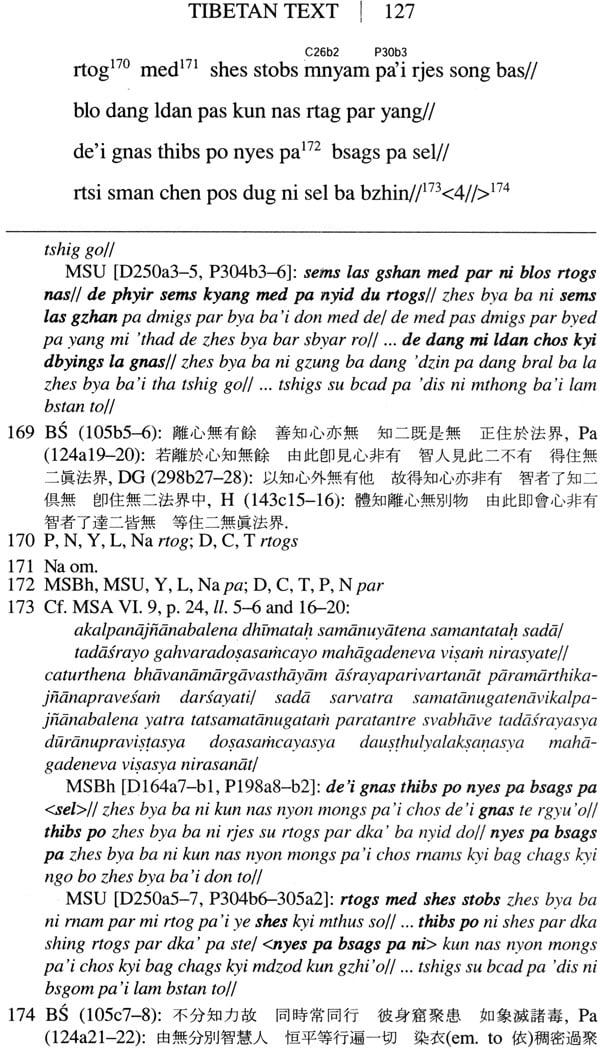 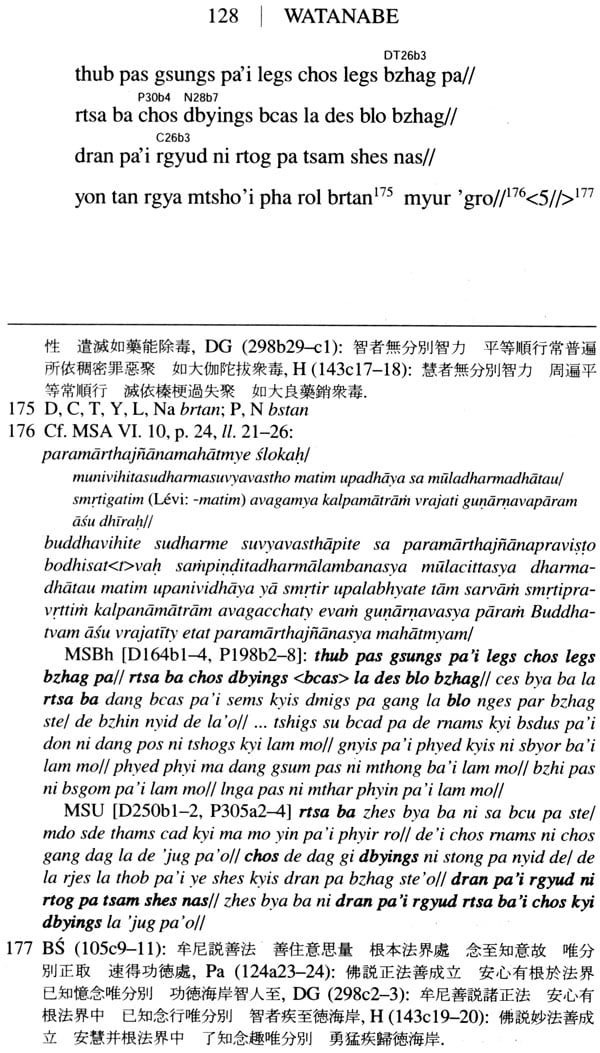 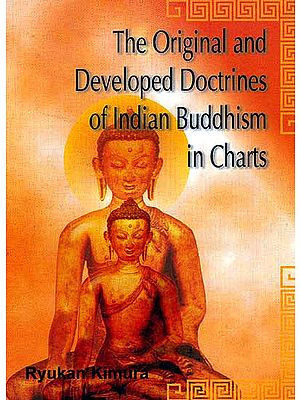 The Original and Developed Doctrines of Indian Buddhism In Charts
By Ryukan Kimura
$20.00
FREE Delivery

The Arts of Hinduism Buddhism and Zen (Its Religious Belief's and Philosophy)
By Nancy Wilson Ross
$57.00
FREE Delivery 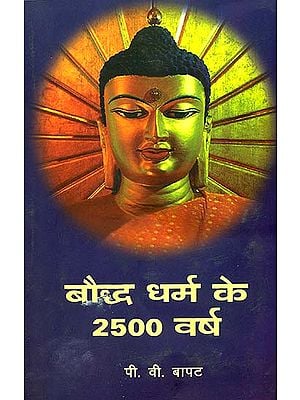 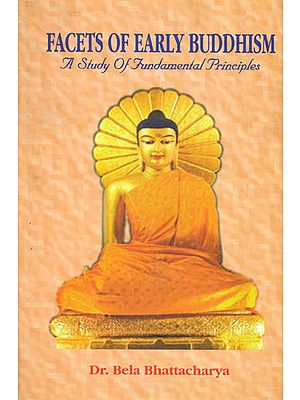 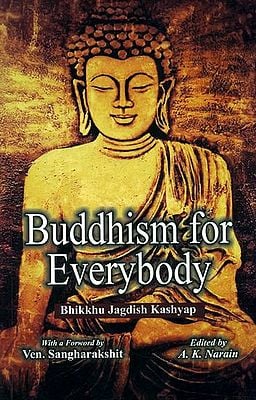 Buddhism for Everybody
By Bhikkhu Jagdish Kashyap
$16.00

Sahajayana (A Study of Tantric Buddhism) - (An Old and Rare Book)
By Ramprasad Mishra
$43.00
Out of Stock