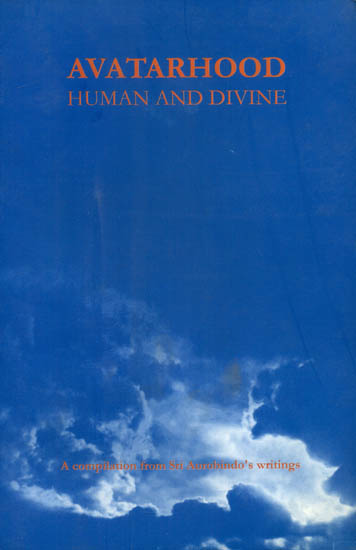 As for the Divine and the human, that also is a mind-made difficulty. The Divine is there in the human, and the human fulfilling and exceeding its highest aspirations and tendencies becomes the Divine. … When the Divine descends, he takes upon himself the burden of humanity in order to exceed it-he becomes human in order to show humanity how to become Divine. But that cannot be if there is only a weakling without any divine Presence within or divine Force behind him-he has to be strong in order to put his strength into all who are willing to receive it. There is therefore in him a double element-human in front, Divine behind-and it is that which gives the impression of unfathomableness of which you complained. If you look upon the human alone, looking with the external eye only and not willing or ready to see anything else, you will see a human being only-if you look for the Divine, you will find the Divine.

God is both the One Existence and the All-Existence. Not only is there a transcendent Being, but in the apparent finiteness of name and form lies concealed a veiled manifestation of the immanent Divine. There is a progressive gradation of being soul, shrouded in ignorance, ascends into self – Knowledge. But when there is a “full and conscious descent of the Godhead” taking the appearance of a human birth, in a direct incarnation of divine Consciousness and Power, then the Avatar manifests.

The upholding of the Dharma is only one aspect of the divine descent; for the re-establishment of justice and virtue the divine Omnipotence can use vibhutis, great personalities and great movements as well. For, Sri Aurobindo explains,” there are two aspects of the divine birth; one is a descent, the birth of God in humanity, the Godhead manifesting itself in the human form and nature, the eternal Avatar; the other is an ascent, the birth of man into the Godhead, man rising into the divine nature and consciousness, madbhavam agatah; it is the being born anew in a second birth of soul. It is that new birth which Avatarhood and the upholding of the Dharma are intended to serve.” But he adds, “Avatarhood for the sake of the Dharma would be an otiose phenomenon”; the “rising of man into the Godhead” is the Avatar’s mission.

The Bhagavad-Gita presents Avatarhood in the light of Vedanta, of which it is a major canon. The one Self in all, the Godhead seated in the heart of every creature is the key.

Each incarnation proclaims the oneness of his human nature with the divine being, holding his own example as the way and the gate to humanity’s progressive ascent to the divine Consciousness. By knowledge of the Avatar’s divine birth and action humans turn to the Divine and, “by becoming full of him and even as he taking refuge in him they arrive at his nature and status of being.”

The rationalist and the materialist regard Avatarhood as superstition and folly. The dualist argues, “the perfect cannot put on human imperfection”. But, Sri Aurobindo states.”In the Vedantic view of thing all these apparently formidable objection are null and void from the beginning.” Writing in the purest terms term of Advaita Vedanta he continues, “For all here is God, s the Spirit or Self-existence, is Brahman, ekamevadvitiyam, - there is nothing else, noting other and different from it and there can be nothing else, can be nothing other and different from it; Nature is and can be nothing else than a power of the divine consciousness; all beings are and can nothing else than inner and outer, subjective and objective soul-forms and bodily forms of the divine being which exist in or result from the power of its consciousness. Far from the Infinite being unable to taken on finiteness, the whole universe is nothing else but that; we can see, look as we may, nothing else at all in the whole wide world we inhabit. Far from the Spirit being incapable of from or disdaining to connect itself with form of matter or mind and to assume a limited nature or a body, all here is nothing but that, the world exists only by that connection, that assumption.”

And he add, “Far from the world being a mechanism of law with no soul or spirit intervening in the movement of its forces or the action of its minds bodies, - only some original indifferent Spirit passively existing somewhere outside or above it, - the whole world and every particle of it is on the contrary nothing but the divine force in action and that divine force determines and governes its every movement, inhabits its every from, possesses here every soul and mind; all is in God and in him moves and has its being, in all he is, acts and displays his being; every creature is the disguised Narayana.”

Sri Aurobindo goes on explaining , “all beings are even in their individuality unborn spirits, eternal without beginning or end, end in their essential existence ad their universality all are the one unborn Spirit of whom birth and there are only a phenomenon of the assumption and change of forms. The assumption of imperfection by the perfect is the whole mystic phenomenon of the universe; but the imperfection appears in the form and action of the mind or body assumed, subsists in the phenomenon, - in that which assumes it there is no imperfection, even as in the Sun which illumines all there is no defect of light or of vision, but only in the capacities of the individual organ of vision.”

And he concludes, “The Avatar therefore is a direct manifestation in humanity by Krishna the divine Soul of that divine condition of being to which Arjuna, the human soul, the type of a highest human being, a Vibhuti, is called upon by the Teacher to arise, and to which he can only arise by climbing out of the ignorance and limitation of his ordinary humanity. It is the manifestation from above of that which we have to develop from below; it s the descent of God into that divine birth of the human being into which we mortal creatures must climb; it is the attracting divine example given by God to man in the very type and from and perfected model of our human existence.”

This is the central teaching, as it emerges in Sri Aurobindo’s Essays on the Gita. Section I of the present compilation, “The Vedantic view”, is a gathering of excerpts from chapter XV, entitled The possibility and Purpose of Avatarhood.

In Section II, “Sri Aurobindo’s Replies to Nirodbaran”, I reproduce extracts from Nirodbaran’s Correspondence with Sri Aurobindo. The effervescent discussion between the Master and his ‘dualist’ disciple, resisting the human side of the Avatar with all that this entails, often reaches peaks of sublime humour.

In Section III, “The Purpose of Avatarhood”, there is a selection from Letters on Yoga. Presented here are quotes addressing the question of the Avatar from the ‘historical’ perspective, where incarnations are purported to take birth according to the specific are purported to taken birth according to the specific need of the Age. Typical misconceptions on morals, saintliness, grandeur – already debated with Nirod – are further clarified.

In Section IV, ”Leaders of Evolution”, I reproduce excerpts about the Avatar from On Himself, where it shows it shows how the Avatar is required to surmount all sorts of human difficulties in order to point the way to the disciples by the force of his own example.

The compilation concludes with the poem A God’s Labour vividly depicting the ordeals and trials that the Avatar, a descent of the Godhead into a human vessel, has to undertake in order to fulfil his mission. 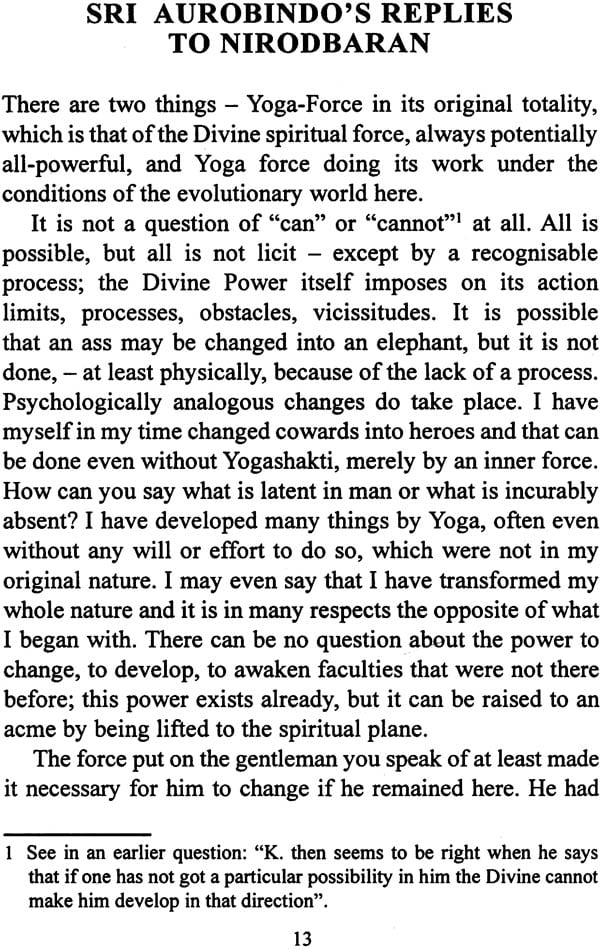 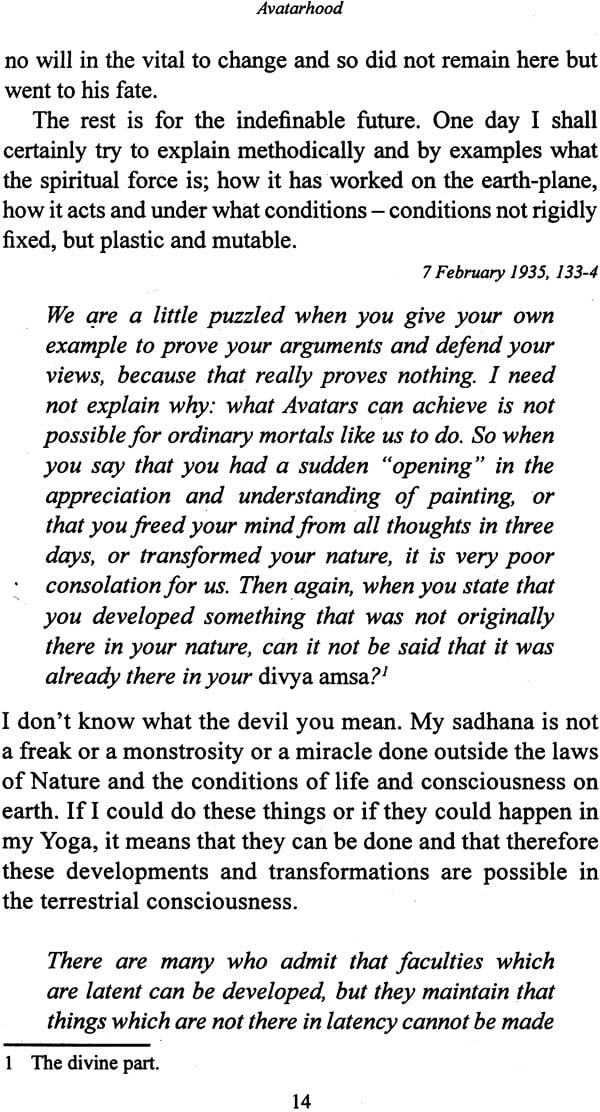 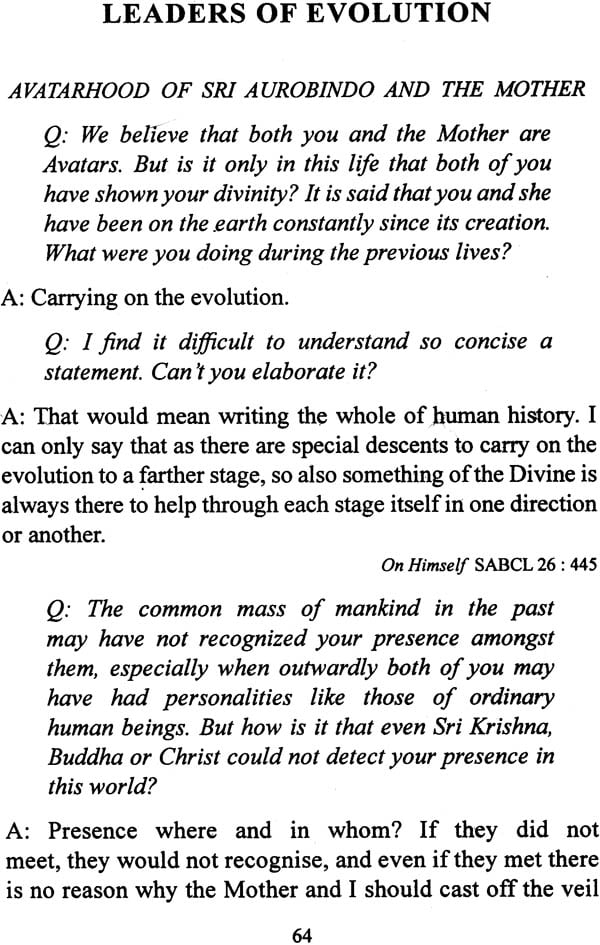 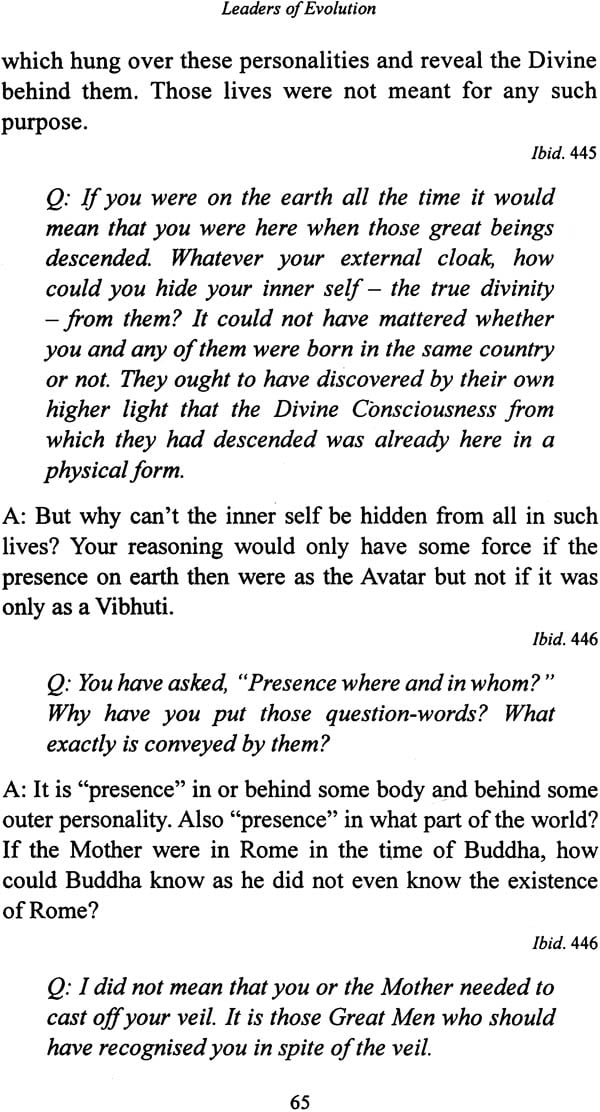 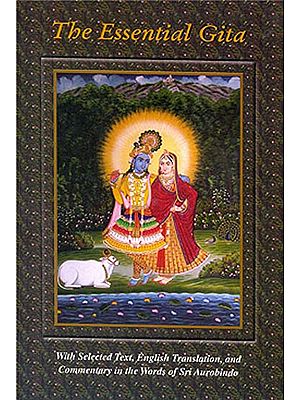 Thoughts on The Gita (A Study of Sri Aurobindo's Essays on The Gita)
By M.P. Pandit
$33
FREE Delivery 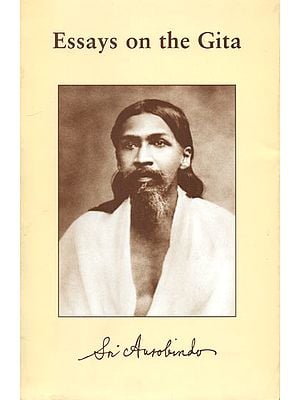 Essays on The Gita
By Sri Aurobindo
$33
FREE Delivery