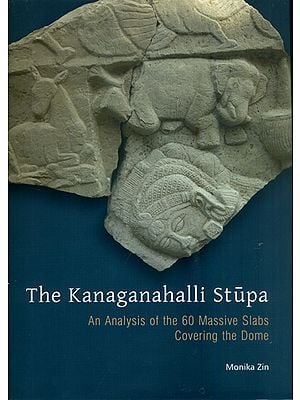 $77.00
Notify me when this item is available
Save to Wishlist Send as E-card Share by Email
About the Book

The book delivers a profound analysis of the 60 monumental slabs which covered the dome of the as yet relatively unknown stupa at Kanaganahalli (Karnataka ), one of the greatest discoveries of the Archaeological Survey of India in the zoth century. The study presents a stylistic examination of the reliefs and tentatively determines their original sequence. Using the Prakrit inscriptions on the slabs, as well as textual sources in Sanskrit, Pali, and Chinese, the book analyses the contents of the representations and provides comparative pictorial material from Andhra, Ajanta, Sanchi, and Bharhut (159 colour plates). The Kanaganahalli slabs are illustrated in clearly legible line drawings made by the author which have been arranged in the order that a visitor to the Adhalakamahucaitya would have seen them while circumambulating the monument. The book is intended for researchers and lay readers interested in Buddhism and ancient Indian art and culture.

Monika ZIN taught Indian art history at the Ludwig-Maximilans-Universitat in Munich and the Freie Universitat Berlin from 1994 to 2016). Among her research contributions are monographs such as Aumta: Handbook of the Paintings. Devotional and Ornamental Paintings, Harrassowitz 2003 (English edition currently pending publication at the IGNCA); Compassion and Miracles: D(!1/cult Conversions and Their Iconography in Indian Buddhism (in German. Harrassowitz 2006); Sumsaracakra: The Wheel of Rebirth in the Indian Tradition (together with Dieter SCHLINGLOFF in German, EKO House of Japanese Culture, 2017) and numerous articles on the identification of narrative art and Indian drama. Since 20I6. Prof: zin has led the research team of the Centre 'Buddhist Murals of Kucha on the Northern Silk Road' at the Saxon Academy of Sciences in Leipzig/Leipzig University.

Preliminary Remarks The discovery of the Buddhist site at Kanaganahalli (Karnataka, District Gulbarga) certainly numbers among the most important findings of the second half of the 20th century. Access to this site has yet to be granted to the public; what is known about Kanaganahalli comes from the extensive work Excavations at Kanaganahalli, an official excavation report, and the first all-embracing study published as Memoirs of the Archaeological Survey of India No. 106 by K.P. POONACHA 2011. Readings of approximately 300 inscriptions by Oskar VON HINUBER have also already been made available. Furthermore, images of large slabs from the stupa were published in a book by Noritoshi ARAMAKI, Duraiswamy DAYALAN, and Maiko NAKANISHI, and several short archaeological reports in the Indian Archaeology - A Review, and a few articles on separate reliefs or inscriptions have appeared.

The expansive historical area to which Kanaganahalli belongs is the discovery site of a slab inscribed on both sides with Asokan Rock Edicts XII and XIV and Separate Edicts I and II (FALK 2006, pp. 30-31, with references) as well as several inscriptions referring to the Satavahana kings (SARMA / VARAPRASADA RAO 1993, with references). This area encompasses the sites of Sannati, Hasargundgi, and Anegutti, as well as several others (cf. HOWELL 1995; DEVARAJ / TALWAR 1996; Excavations at Kanaganahalli, further: POONACHA 2011, pp. 1-30 and Appendix I). The region calls for further excavations and deeper research, which will certainly continue in the coming years and go on into the next several decades.

Several structures are located at the site of Kanaganahalli (POONACHA 2011, pp. 41-159), including a monastic complex, a tiny apsidal temple, several votive stupas, and various paved platforms. These are all grouped around a monumental stupa; labelled "Adhalaka mahacaitya" in inscriptions," As stated in POONACHA (2011, p. 65), the diameter of the stupa was approx. 26 meters. The circumference of its lower drum was 74.35 meters, while the upper drum measured 68.14 meters. The drum had four projecting platforms, called ayakas, which were approx. 3.60 meters wide in all cardinal directions. The eastern platform supported four columns. The drum was covered from above with horizontal slabs 75 centimetres in width, adorned with decorated cornices. These created a pseudo-pradak$i1Japatha, an upper path intended for circumambulation, which was, however, not actually used for this purpose here. The stupa was surrounded by a railing with a circumference of 94.30 meters with four entrances facing the ayaka projections; the width of the circumambulatory passage was 3.25 meters (PI. 1).

The iconographical programme of the stupa was manifold. Buddhapadas and four Buddha statues (two standing Buddhas and two sitting) were placed on the projecting ayakas, and eight sitting Buddhas were positioned in the circumambulatory passage - six Buddhas of the past, our Buddha, Sakyamuni, and the future Buddha, Ajita (Maitreya) - and were all named in inscriptions," Yak$as were placed on the side of the ayakas (POONACHA 2011, pp. 99-100). The stupa (cf. PI. 1) was panelled with two rows of light stone slabs decorated with reliefs of a mostly narrative character. The lower row served as panelling for the drum, with uniformly designed slabs reaching from the ground to a height of approx. 1.5 meters. 60 uniformly-designed slabs approximately 3 meters tall' and 1.20 meters wide were positioned above the drum (PIs. 2-31). They were recessed in the stones of the pseudo- pradaksinapatha, mounted on the dome by means of a semi-circular collar below, and weighted from above by a frieze decorated with a series of fantasy animals proceeding to the left.

The huge reliefs were indisputably the most important part of the religious experience at the site - and were surely also a crucial part of the aesthetic experience.

The present work is a study investigating those 60 slabs, their form and significance, the literary basis of the narratives they represent, the elements of material culture they depicted, and their importance for the development of Buddhist art. A second study which will deal with the other reliefs and sculptures from the site is to follow.

The Kanaganahalli stupa must be viewed in the context of other monuments of the time. This present study will demonstrate that most of the comparative representations come from older paintings in Ajanta, the reliefs in Sanchi, and from different centres of the Amaravati School- in other words, the representations display affiliations in imagery to different parts of the Satavahana Empire. The technique and placement of reliefs on the stupa, with slabs panelling the drum and the dome, is typical for Andhra. On several stupas - including the great stupa in Amaravati (cf. Figs. 33, 93, 114, 118 in this book) - the drum and the dome were panelled with slabs. In Jaggayyapeta, for example, some of the drum slabs are still in situ (Fig. 1 ).8 As in Kanaganahalli, several of these slabs were decorated with reliefs while others were left plain and were simply framed with decorative columns on the side where the slab overlaps the junction with the neighbouring slab. Such undecorated slabs were probably painted. In Chandavaram, it is still possible to see where the dome slabs were fixed above the drum slabs. Some of the slabs (cf. Fig. 36 in this book) consist of two panels while some are composed of three panels (cf. Fig. 148), positioned one above the other.

Indeed, later, smaller slabs from Nagarjunakonda (Fig. 2), where the entire relief stands at a total height of 1.80 meters, still repeat the same arrangement of narrative panels placed one above the other. The slabs have been framed on one side, with a pilaster casing the joint to the neighboring relief and an animal frieze on the top. Though Kanaganahalli stands firmly in the Andhra tradition, the site is absolutely unique. This uniqueness is due to its characteristic style, the uniformity of the slabs, the large number of the narrative representations, and, above all, to the fact that it has been almost entirely preserved, which allows us to develop an understanding of the site as a complete monument. The preservation of this site is of great importance as it makes it possible for us to understand other sites in the region which have - been drastically rebuilt or are less well-preserved. The most essential task that is faced is the reconstruction of the original state of the monument. The Archaeological Survey of India has already concluded an unbelievably difficult undertaking, the scope of which cannot be overstated. The fragments of 59 slabs have been painstakingly reassembled and are stored under the cover of a roof at the site. One of the main objectives of the present study is to establish the original locations of the slabs on the monument.

What is most striking about the 60 massive slabs is their uniformity. A close Scrutiny of their form and style presents us with a tool for establishing their original location on the stupa. Each slab contains two panels, placed one above the other and separated by a frieze composed of geese depicted either standing or flying (the only exception being slab No. 26 (PI. 7), which contains narrative representations in a single section which is not separated by a frieze). Along their sides, the slabs have beautifully worked pilasters overlapping the junction with the neighbouring slab. The stems of the pilasters are in the form of uprights of a railing which have been decorated with lotus rosettes. The bases take the form of round pots, and the capitals are crowned with a pair of animals sitting back to back. In several cases the capitals, bases, or shafts of the pillars have been replaced with elements of symbolic meaning, such as stupas, or "vases of plenty". 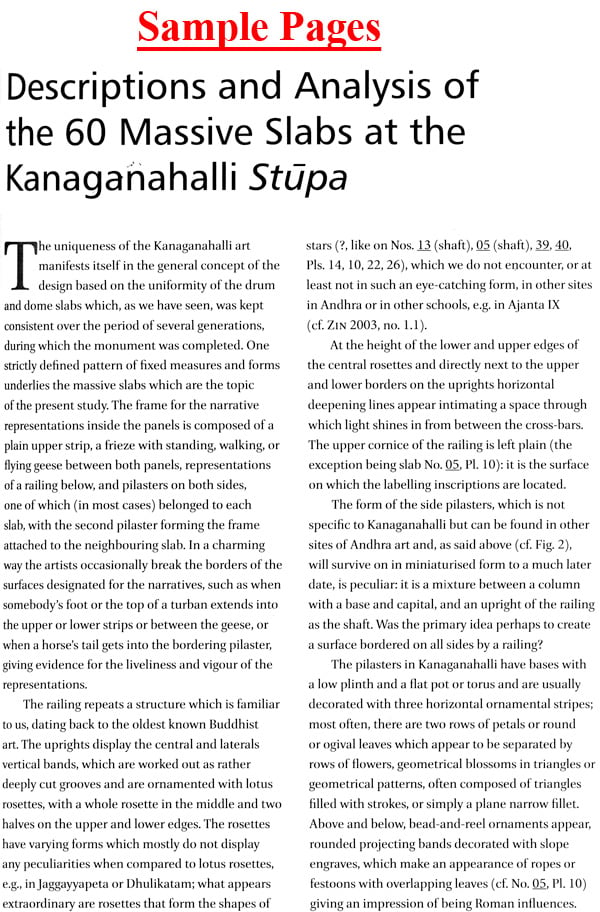 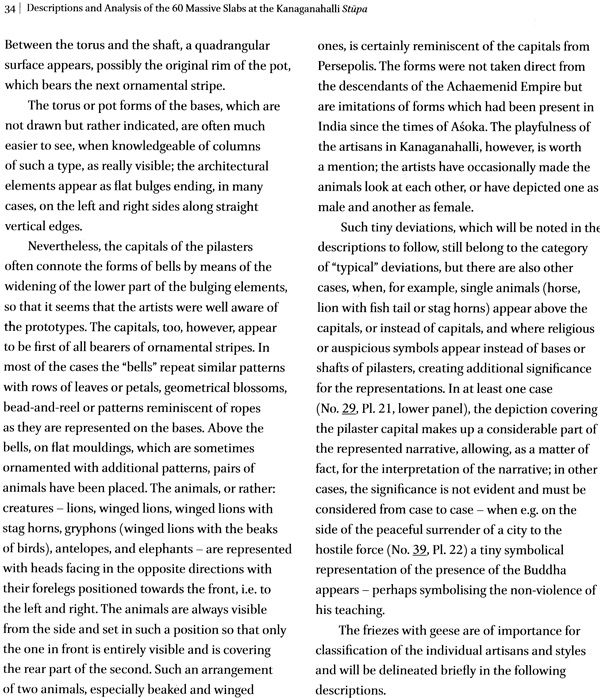 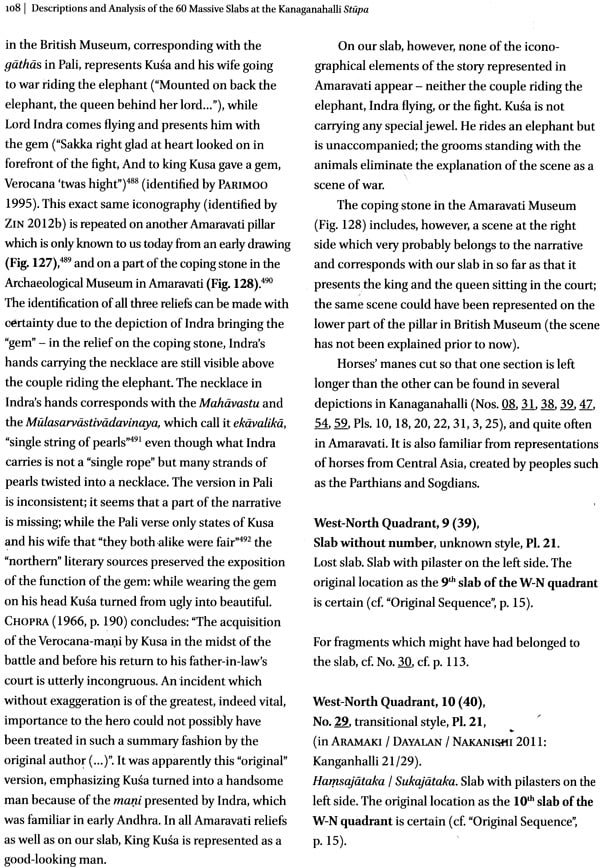 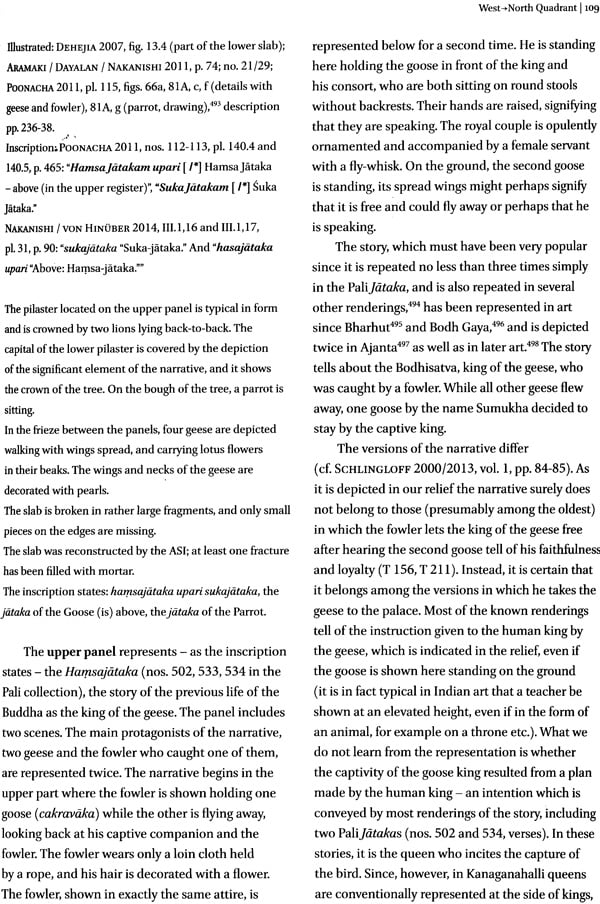 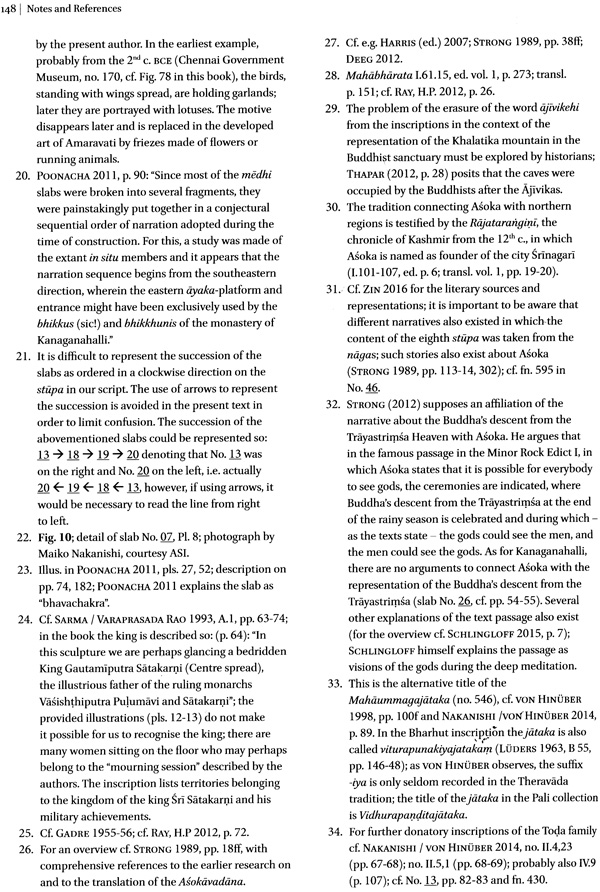 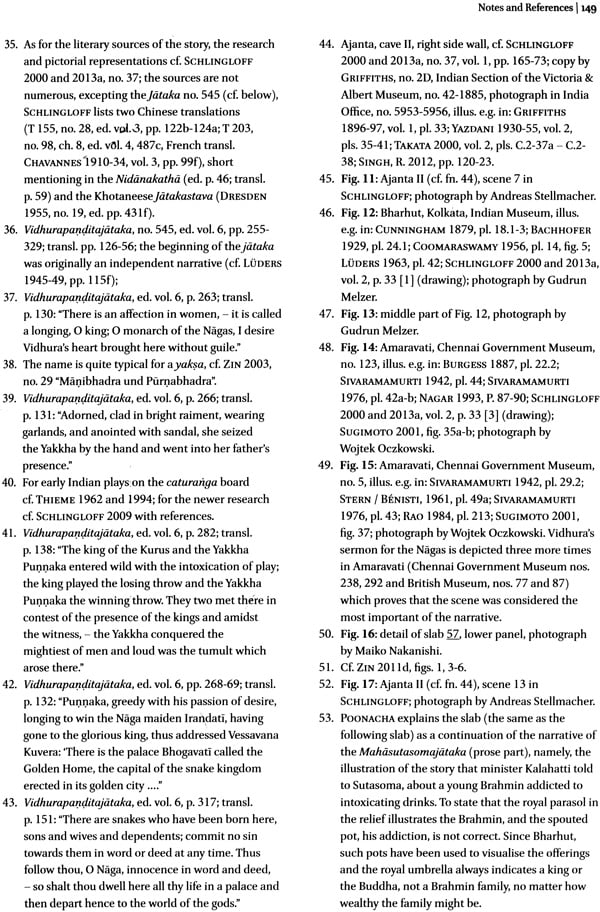 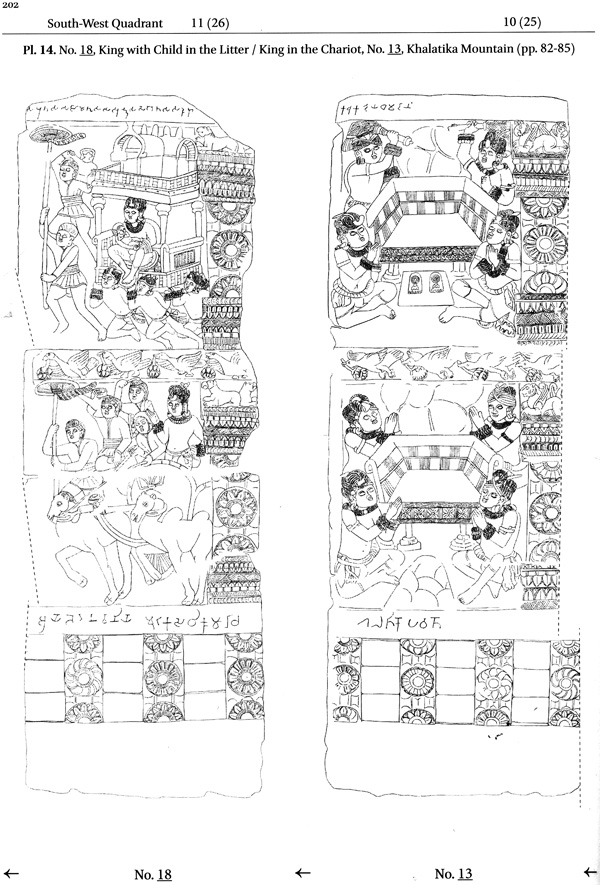 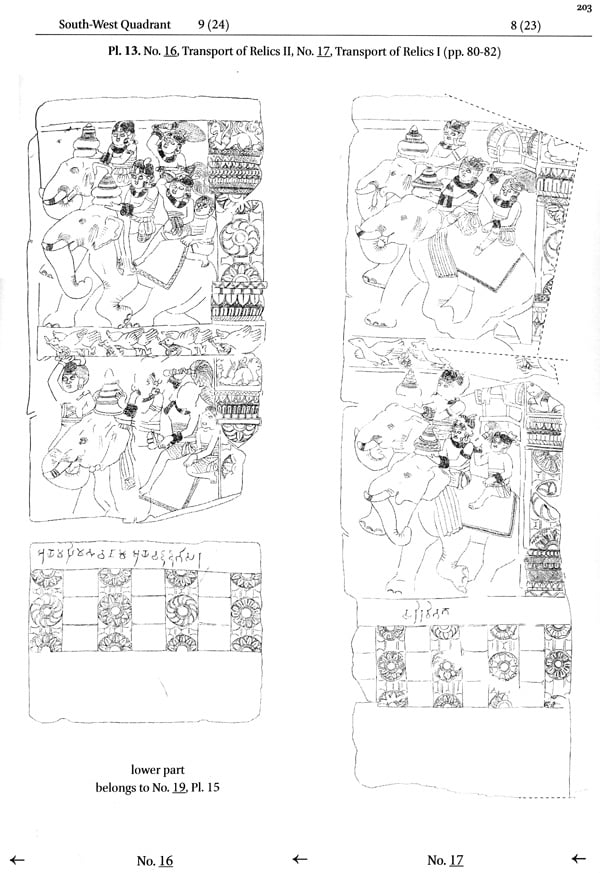 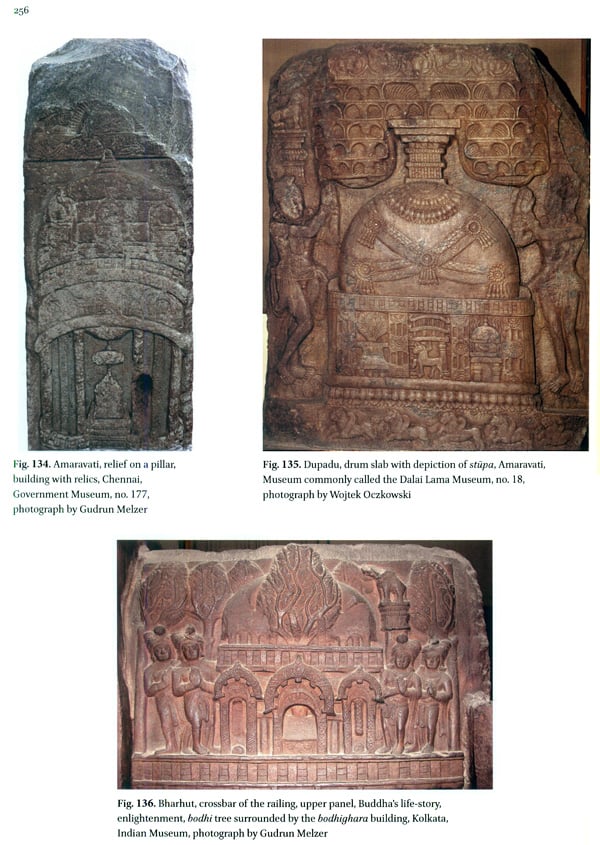 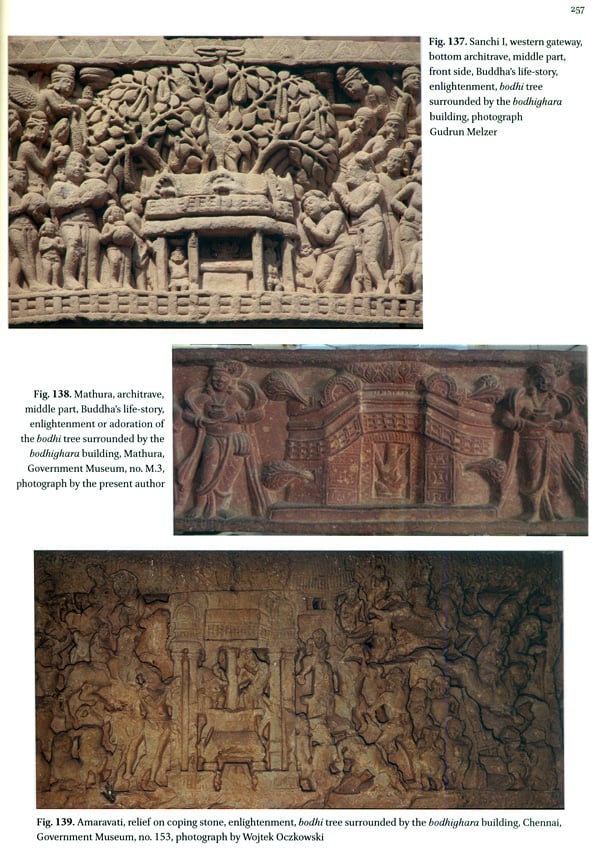