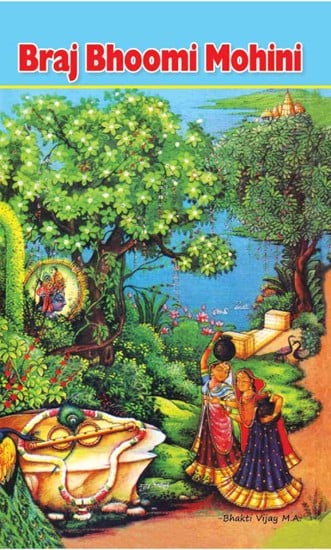 `Braj Bhoomi Mohini' composed by revered Vijay Baba is an unprecedented book this book is based on evidence. It is not only authentic but also authoritative and that is why this book has become a reference book three editions of this book have been published in Hindi. In the preface of the first edition Vijay Baba has talked about the history of the book and its form. English translation of that preface has been included in this book without which this foreword would have been incomplete.

Many revered saints and scholars gave their views and opinions regarding the Hindi edition. The English translation of these opinions that establish the superiority and uniqueness of the book have been included in this book The comments of extremely Revered Bhaktimati Usha Behenji and Radha Baba authenticate the greatness of the book and the greatness of Revered Vijay Baba.

The popularity of the book is another indicator of its greatness. If such books are translated in other languages, then the book becomes useful even for those who do not understand the original language. English is one language which is spoken and understood by a lot of people all over the world including India. Keeping this fact in mind, this translation has been done. In any translation due to cultural differences, there is a deficiency of words and expressions. And this is quite evident in this English translation. To overcome this deficiency to some extent, some Hindi words have been used as it is, and their meanings have been provided in a glossary that has been included in the appendix.

I always had an apprehension regarding the grammar and the composition which might constraint some readers at few places where the impression of Hindi has become evident.

For this I sincerely tried to get help from three persons. I pursued them for more than six months. Despite their good intentions literally nothing was done. This for me, in fact is a sign from the Providence that the readers should have the book as it is and try to pass on the Rasa and joy of Hindi book of Baba irrespective of the perfection of the language.

The distinguishing feature of "Braj Bhoomi Mohini" is its incidental authentication. It took Baba many years to gather the proofs. He collected these proofs from more than a hundred books and compositions and verified the facts. Apart from this, using the personal experiences of many Rasikas, he made the description not only truthful and enlightening but also delightful and savory. He himself had experiences by living at many sites for long periods. His perseverance speaks from each and every word of the book.

In the English translation, these proofs in the form of quotations have been included in Devanagari script as it is, as they are proofs.

The inspiration of this translation is Revered Susheela Behenji. Under her very own guidance and because of the efforts of Nisha behenji, Deepa didi and other sisters, the desired refinement in the book has been accomplished. Because of the grace of Revered Behenji and her direct involvement, the book has attained completeness.

In spite of this, any mistakes and shortcomings that have remained in this translation are only due to our ignorance and for that we ask for forgiveness. Despite these shortcomings, our ardent wish is that the readers get to read something new about Braj. Only then the fruit borne by the hard work of Baba will become even sweeter. 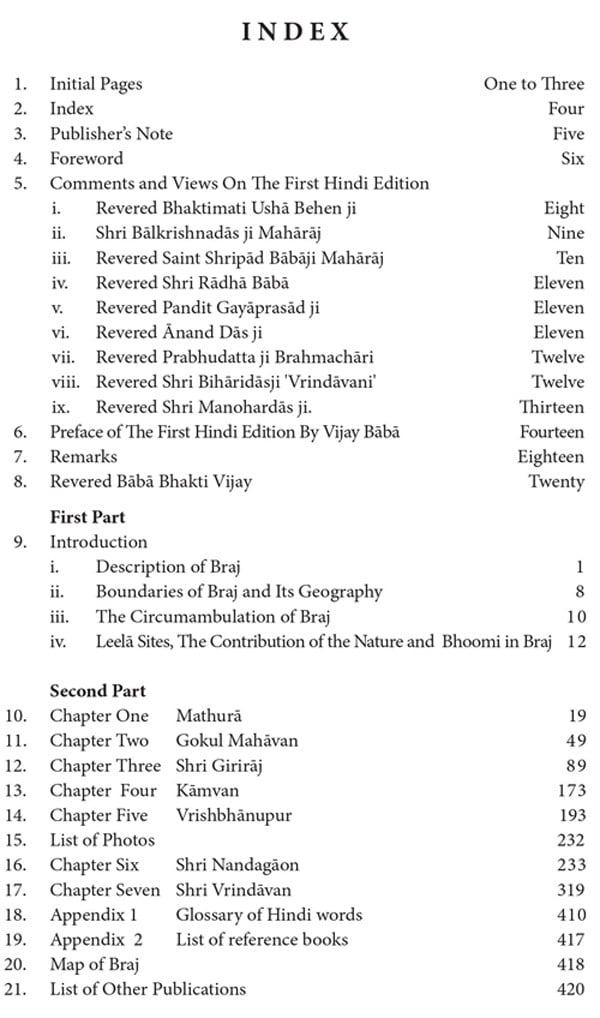 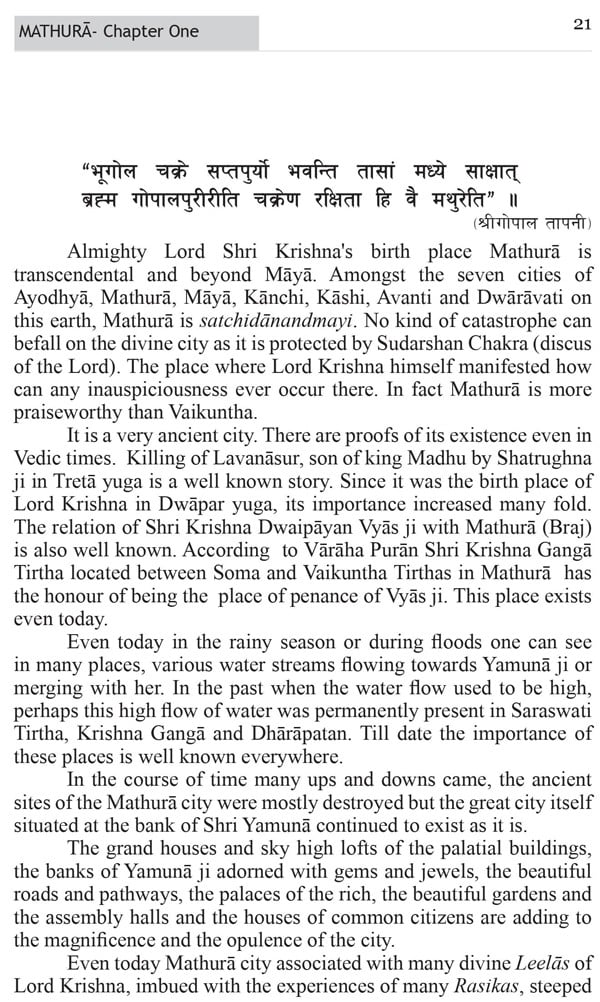 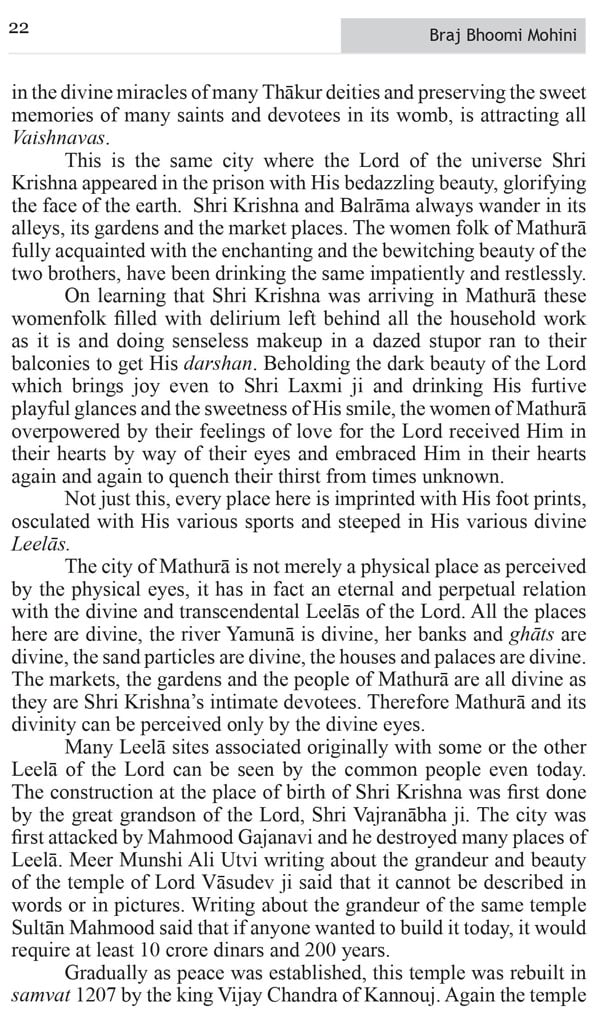 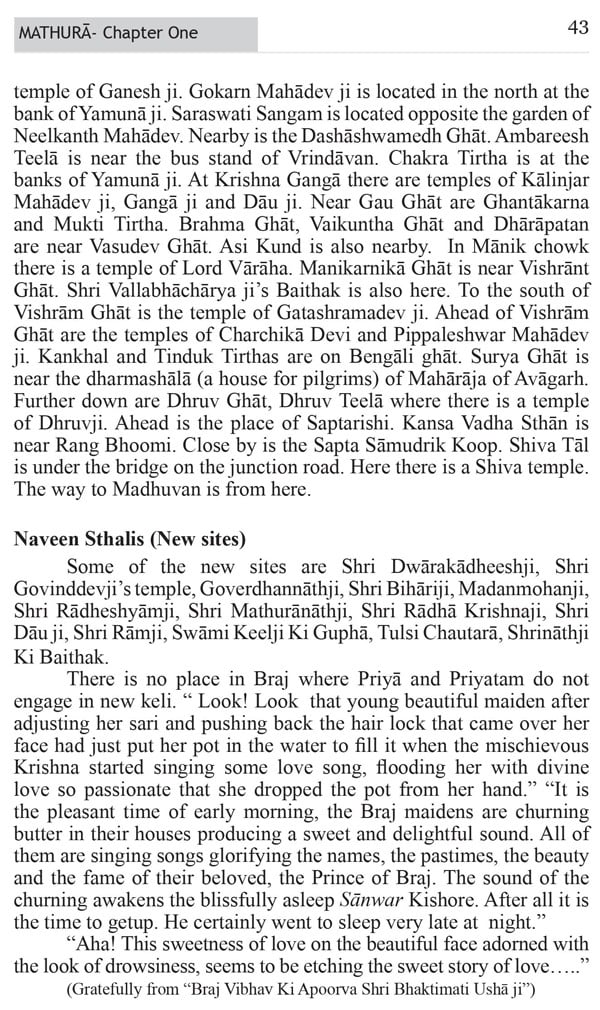 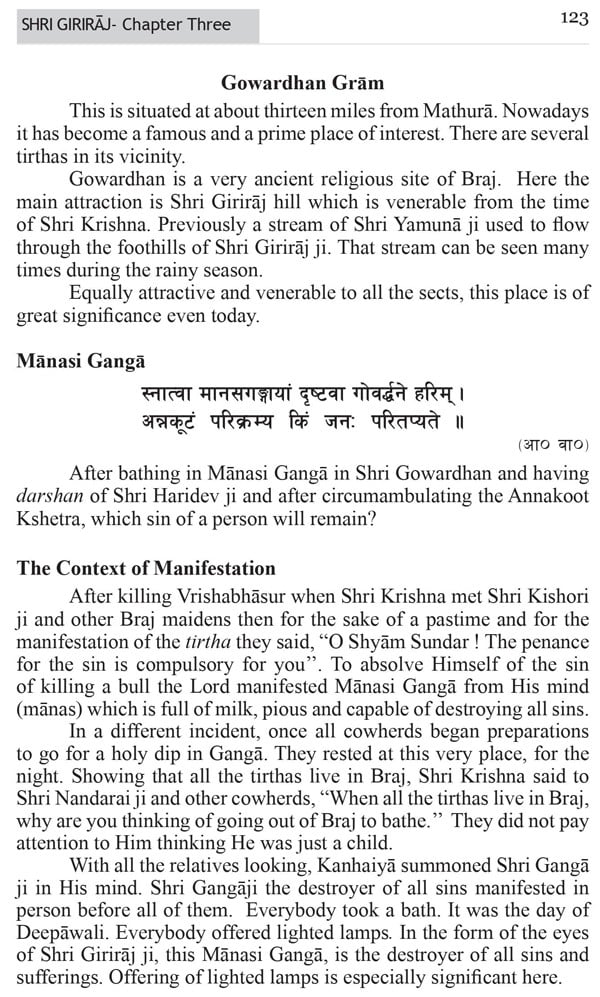 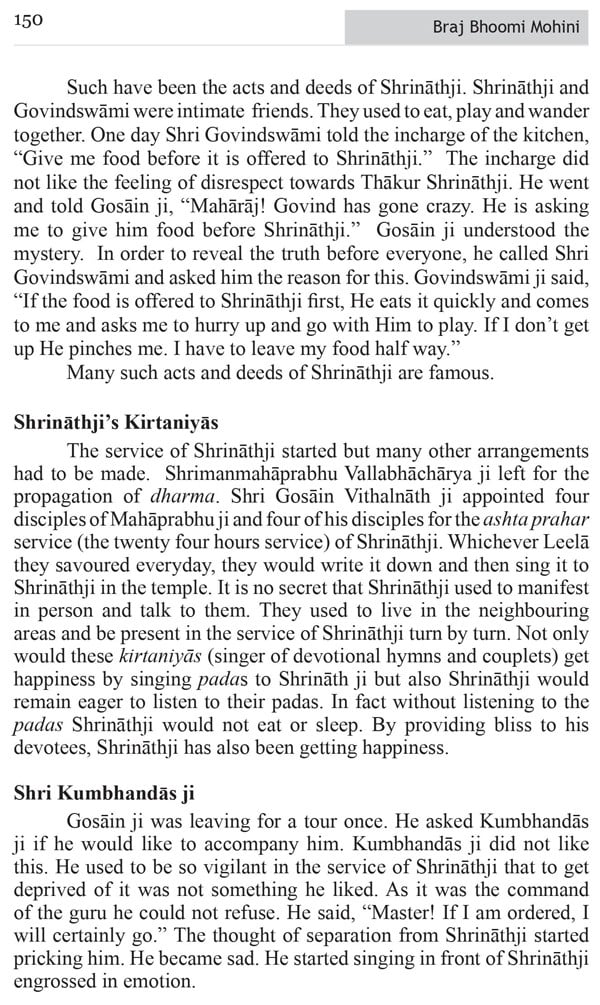 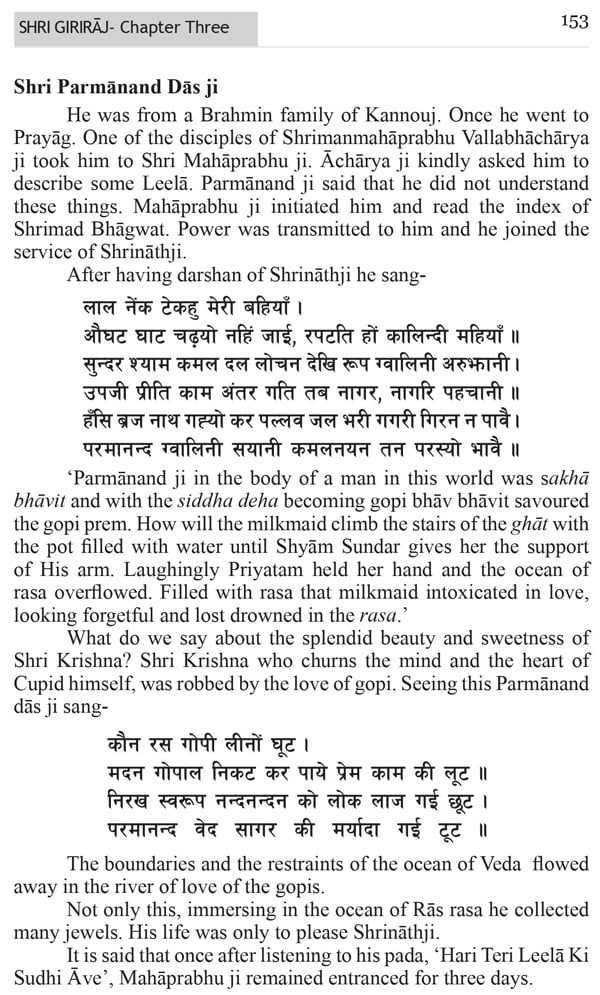 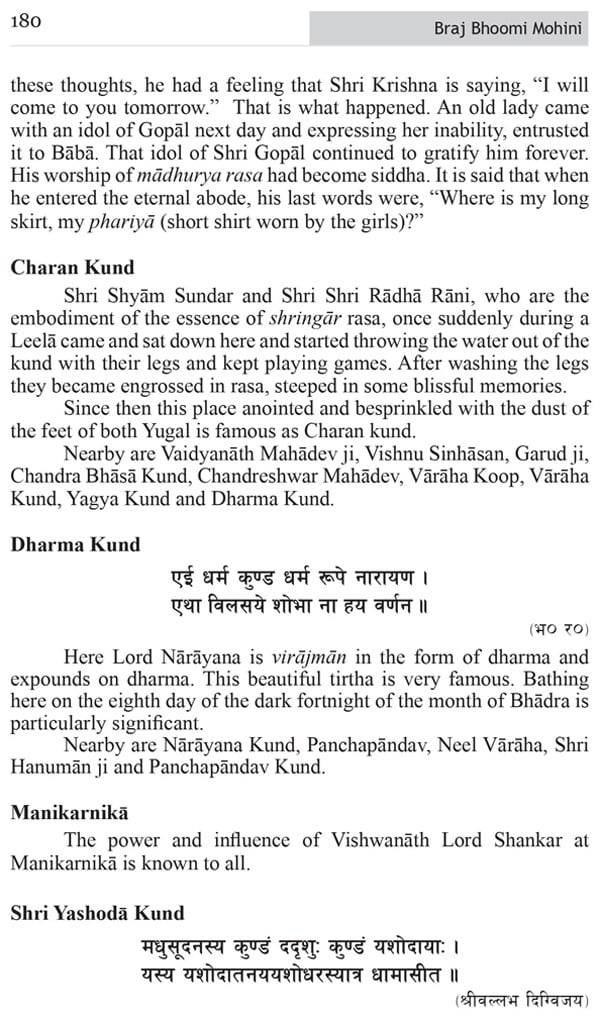 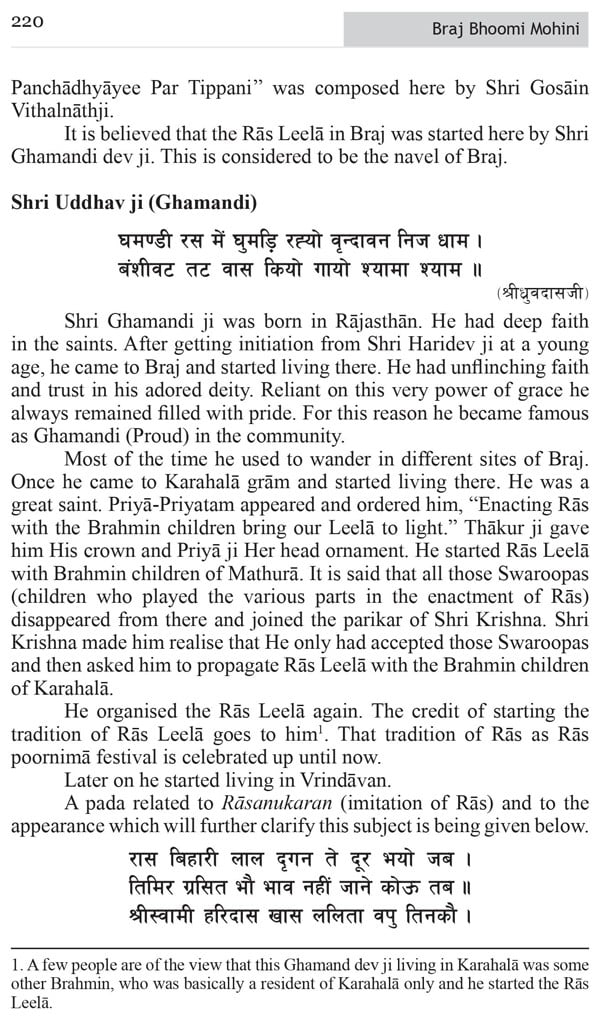 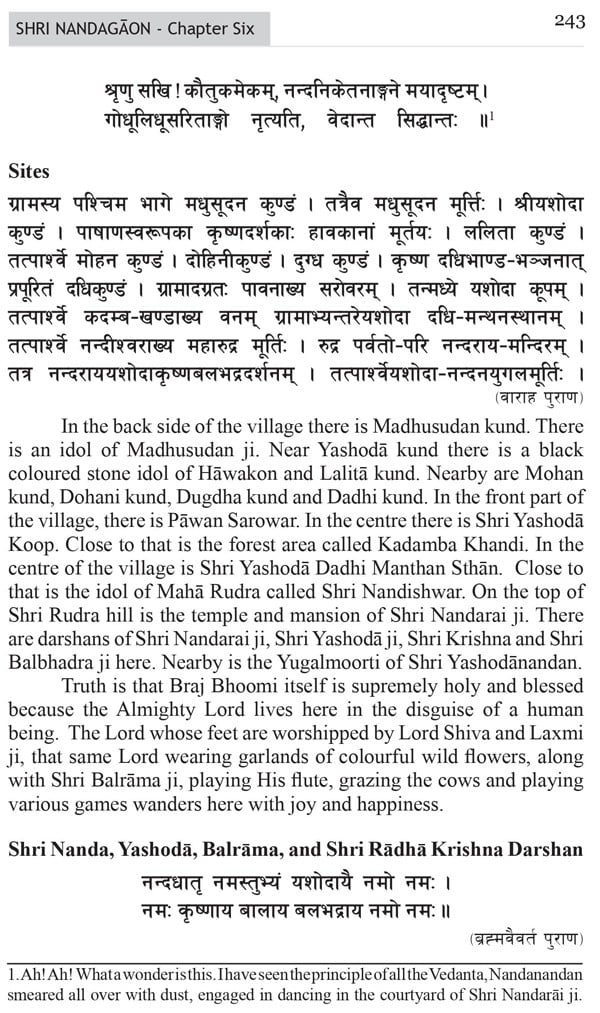 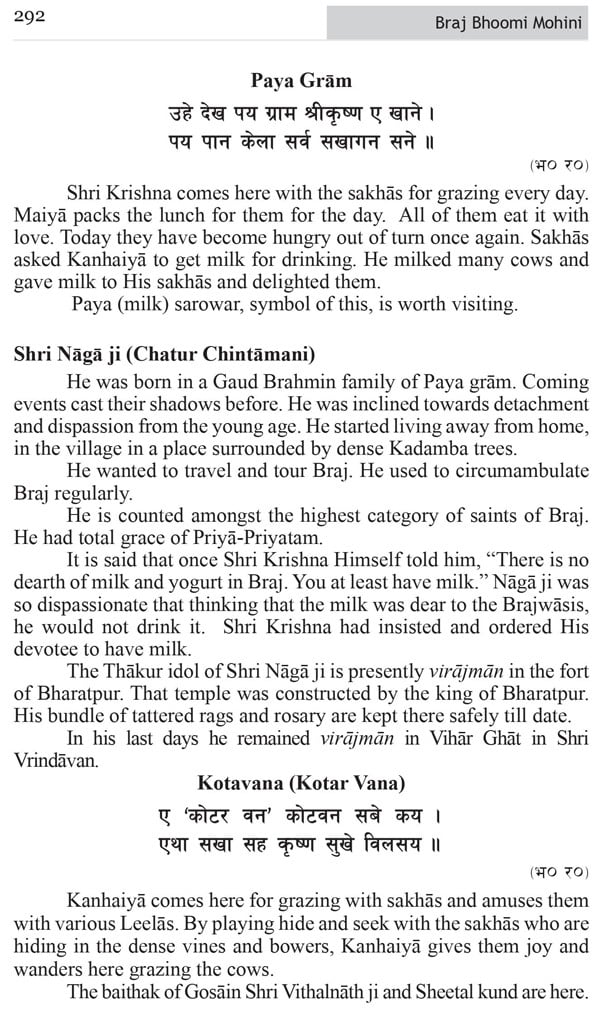 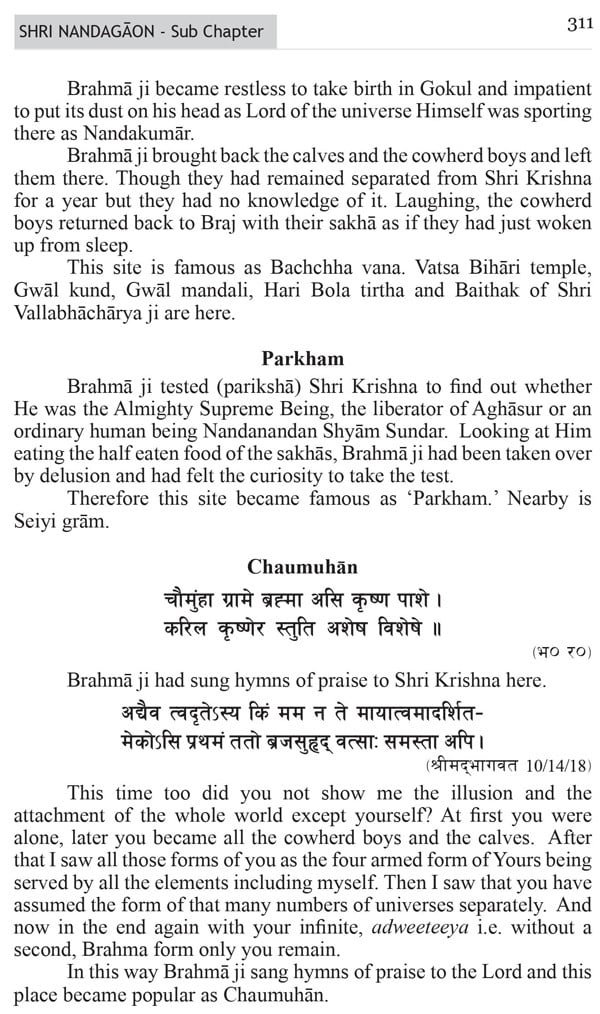 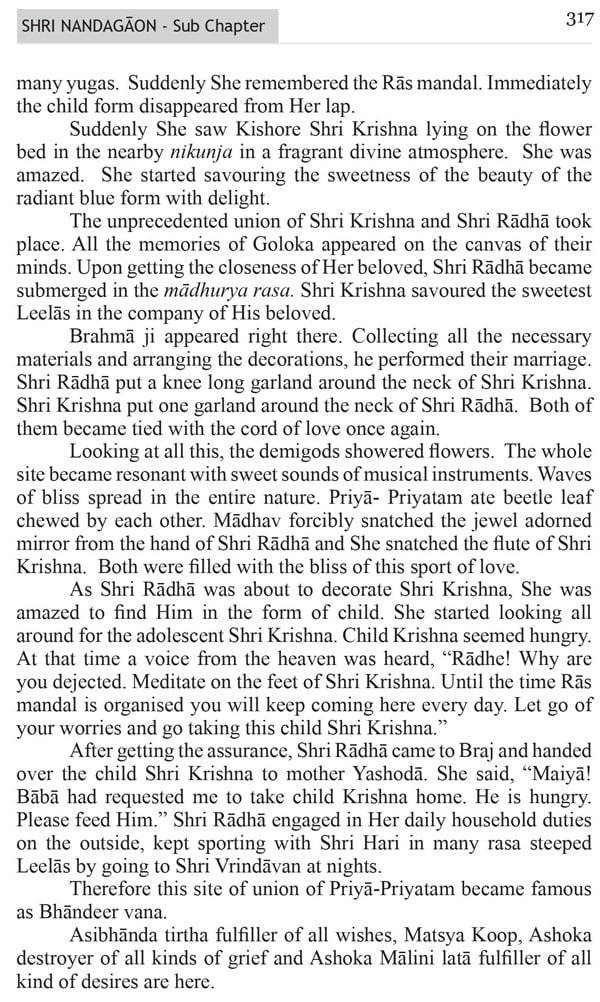 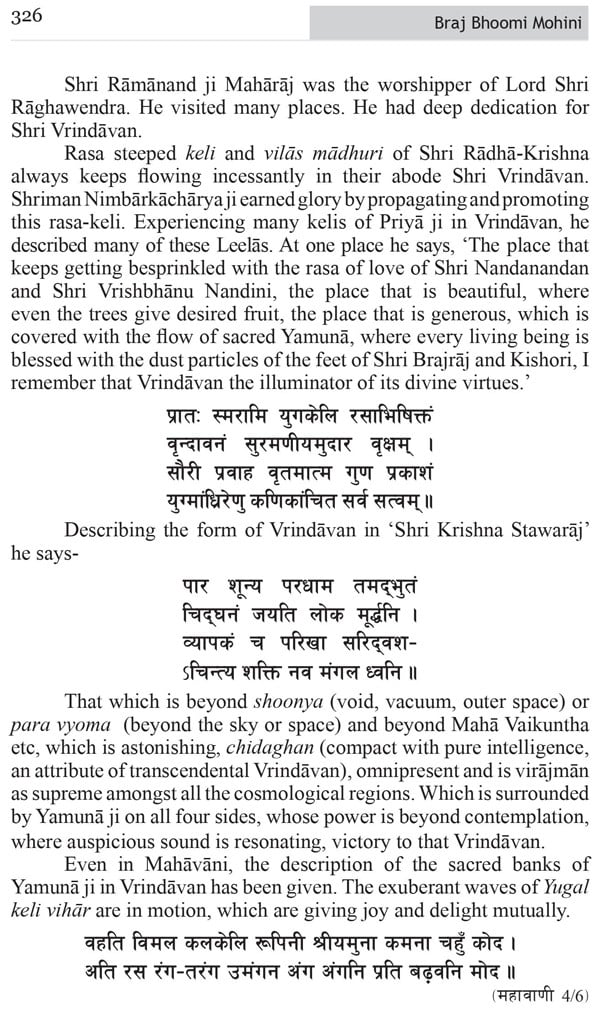