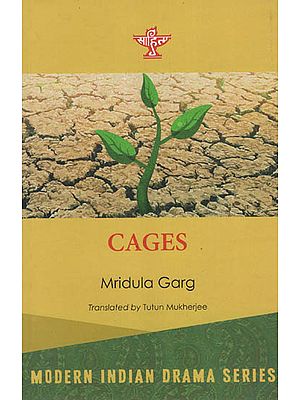 Cages: The themes of the three plays in this volume have a common thread running through them—the imprisonment of human mind in exploitative situations of different kinds—and at the same time present three totally different yet intense scenarios. While one play juxtaposes dreamlike, chimeric, fairytale elements with the harsh existential realities of poverty and exploitation, especially of children; another is a remarkably powerful presentation of a couple trapped within a claustrophobic life-threatening space that gradually reveals the equally stifling control and domination of patriarchy; yet another is a cynical scrutiny of the exploitative man-woman/human relationships. All the three plays, translated into English for the first time, are multilayered and of contemporary relevance, captivating and engrossing in their appeal.

Mridula Garg (b. 1938) stands apart among Hindi litterateurs for her audacious themes and searing honest style of writing. With eight novels, eleven short story collections, four plays and three volumes of essays and travelogues, Garg is one of the most critically acclaimed writers in India today. Her prominent novels include Kathgulab, Milju! Mann, Uske Hisse Ki Dhoop and Chitfcobra. Her articles in the fortnightly columnkKataksh (Satire) in India Today (Hindi) have been published in two anthologies, Kar Lenge Sab Hazam and Khed Nahin Hai. Her travel memoir is called Kuch Atke Kuch Bhatke. She is the recipient of the Sahitya Akademi Award, Vyas Sanman, Sahityakar Sanman from Hindi Academy, Sahitya Bhushan and Ram Manohar Lohia Samman from U.P. Hindi Sansthan, Maharaja Veer Singh Award and Seth Govind Das Award. She was honored with the 2001 Hellman-Hammett grant for courageous writing by the Human Rights Watch, New York.

Tutun Mukherjee (ob. 1951) retired as professor of Comparative Literature, University of Hyderabad, India. Her specialization in Literary Criticism and Theory fuelled her research interest in Translation, Women's Writing, Theatre and Film Studies. Her books on translation include Translation: From Periphery to Centrestage, Mindscapes: Short Stories of Premenadra Mitra and Staging Resistance: Plays by Women in Translation. She has also translated Nabaneeta Dev Sen's novella Defying Winter, SunilGangopadhyay's Aranyer Din Ratri, and many more. She is the General Editor of the forthcoming anthology of translation titled Dalit Writings from Eastern India.

Henry James once said, ‘Unfortunately my novels are like plays and my plays, like novels.’ I read it in my childhood and the words stayed with me. When I started writing, I felt that in a way, it applied to my work too. Eventually I realized that it was fortuitous, not unfortunate but it took me some time.

When I write a play I find it difficult to treat it as pure theatre. That is, as a narrative, heavily loaded in favor of craft rather than thematic exploration. While writing a novel, on the other hand, I feel compelled to craft a multi-layered dialogue to carry the theme forward. Dialogue becomes an integral part of the novel, in the same way as it is in a play. Since both my novels and plays move on a psychological plane, there is not as much action as is usual in the plays. There is an intriguing qualification to this overlapping of the two genres. I find that for me, a deeply felt theme takes the form of a play rather than a novel, because of the underlying passion; whether it is fury, nausea or irony. I allow my characters more emotively charged expression in a play than in a novel. A play has far more scope for drama than a novel or a story, when performed on the stage. The stage or theatre sometimes acts as a savior in situations; where a fully conceived theme is unable to emerge as a creative work, because the requisite craft is not at hand. In fact, the creative process is nothing more than a search for a suitable craft to express the reflections, emotions and passion, which lie seething in different realms of experience, memory and imagination. Once the craft is found, the three get synced and the writing of the work begins. The choice of the genre thus becomes a part of the process of discovering the craft.

We must not ignore, however, the minute difference between choosing and discovering. When I ask myself, did ! Aeliberately choose to write novels more often than plays and did I deliberately choose to write a play when I did, the answer is, no. When I look back over thirty years of creative writing, I find that the choice of the genre just happened. The theme came to me in the form of a play and I wrote it down as one. The proof lies in the fact that my first major -work apart from short stories; was not a novel but a play, Ek Aur Ajnabi (Strangers). It was published in 1973 in the monthly Natrang edited by Nemi Chand Jain. My first novel Uske Hisse ki Dhoop was published in 1975 and got the Maharaja Veer Singh Award from Madhya Pradesh Sahitya Academy. The novel got instant recognition. But the play Ek Aur Ajnabi took five years to get published as a book in 1978, three years after being staged in 1975 and getting the First Prize for plays by the All India Radio.

Thereby hangs a tale. A play once written has to be performed to gain acceptance. To be performed, it has to be in sync with its time, not ahead of it, as Ek Aur Ajnabi was then thought to be. Its performance on Doordarshan, the national television, was banned by the Director General in 1980, despite its already having been aired from various small towns in many Indian languages. I was told by him that the ban was on two counts. One, the play was against the institution of marriage and two, it made people think! The first is no longer considered of great importance but the second may last forever.

There were other ways in which 1980s prevented the performance of the play. I was told by various drama groups that despite active preparation, it could not be staged because the lead actresses could not stay late in the evening. I don’t how true it was. In any case my inability to socialize with the theater world played a part in disposing me towards writing novels rather than plays.

Between1975-1984, I published five novels and an equal number of short story collections. They attracted critical acclaim and controversy, as well as popularity with readers. But it took me eighteen years to write another full length play, The Magic Carpet (Jadoo ka Kaleen) in 1990. Again it was published as a book only in 1993, after being performed on the stage. It was the experience of going back to writing a play which made me realize that there was nothing unfortunate about my plays being like novels and my novels, like plays. The reason I went back to writing a play was because the choice of the genre was taken out of my hands. The gruesome reality of small children weaving carpets had been driving me up the wall for quite some time. The catalyst came when I chanced upon a poem, written by an anonymous street child of Brazil. I remember I wrote the play soon after through three days and nights without pause. At the risk of sounding corny, I have to say it just happened. I saw and heard it as a play in my mind and wrote it before I could make a judgment about the feasibility of staging it. The performance came much later.

I gave some of the lines from the catalytic poem to one of the characters Lakhan in the play. Interestingly I had to face flak from the critics, who insisted that children don’t/can’t say things like that. I was not bothered because the children, with whom | had conducted a workshop on the play, had shown me that they could. Not that it made the adults change their minds. I realized that this negation represented the same defense mechanism, which made them turn a blind eye to child labor. The argument went: they don’t feel any discomfort/ pain/ loneliness/ deprivation, as long as they are given two meals a day; ergo they cannot express anger/ discontent pain etc. This play has been performed by various groups in small towns and villages but people remain undecided whether to label it as a play for children or adults. Again it does not matter. But I feel that this attitude of what is fit for children and what is not, is a reflection of our national malaise of playing down children’s sensibilities. It is best that each reader makes that decision for himself or herself. 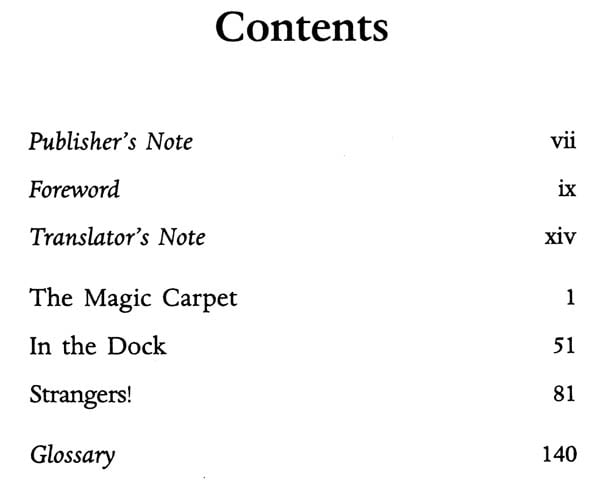 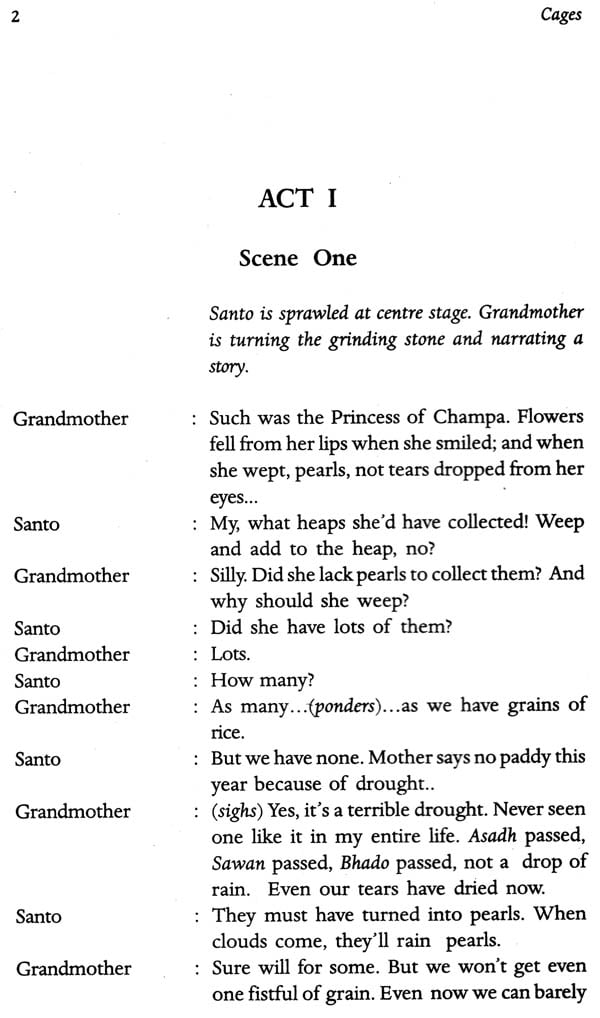 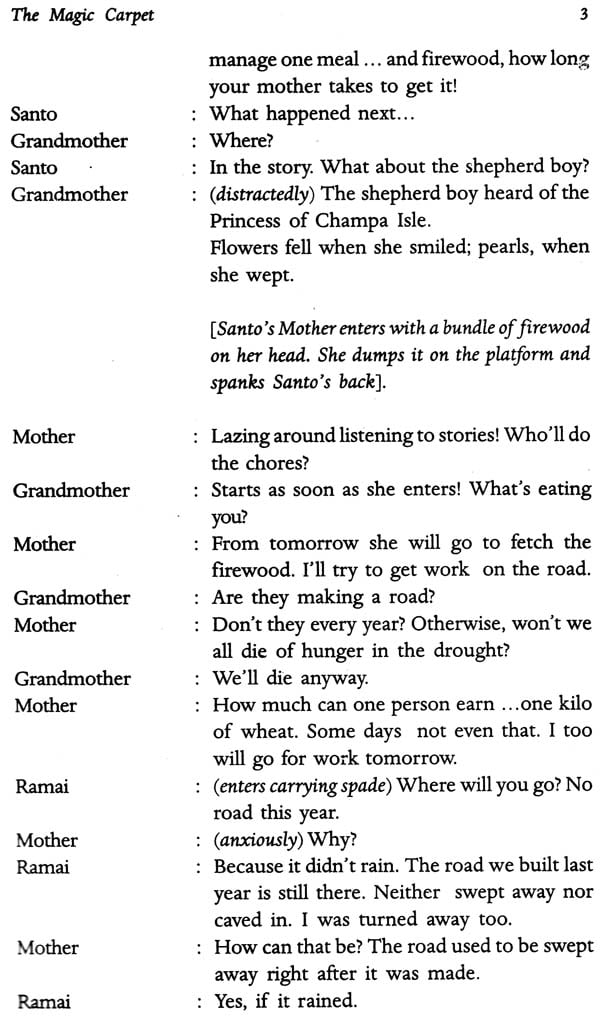 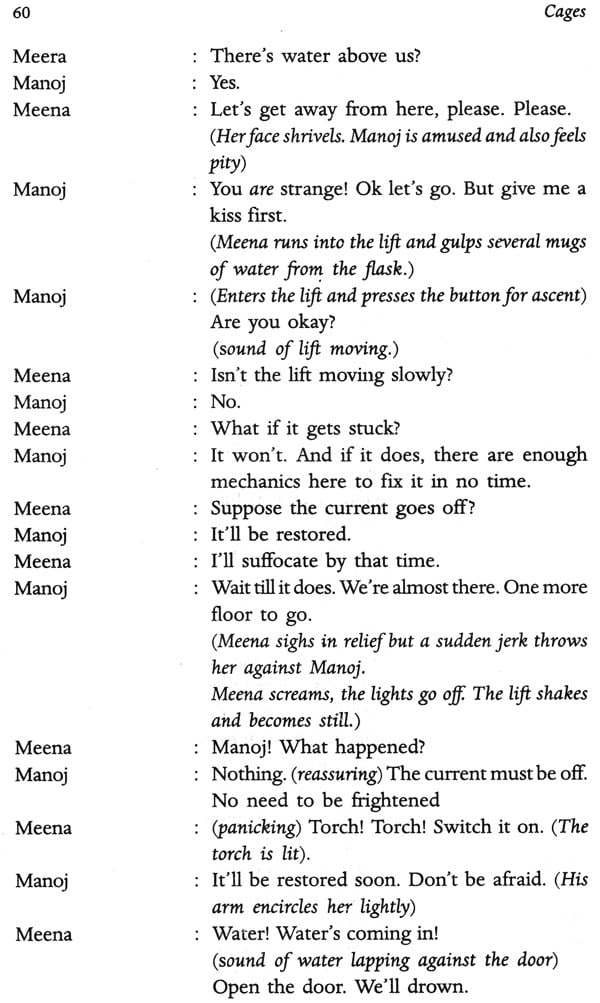 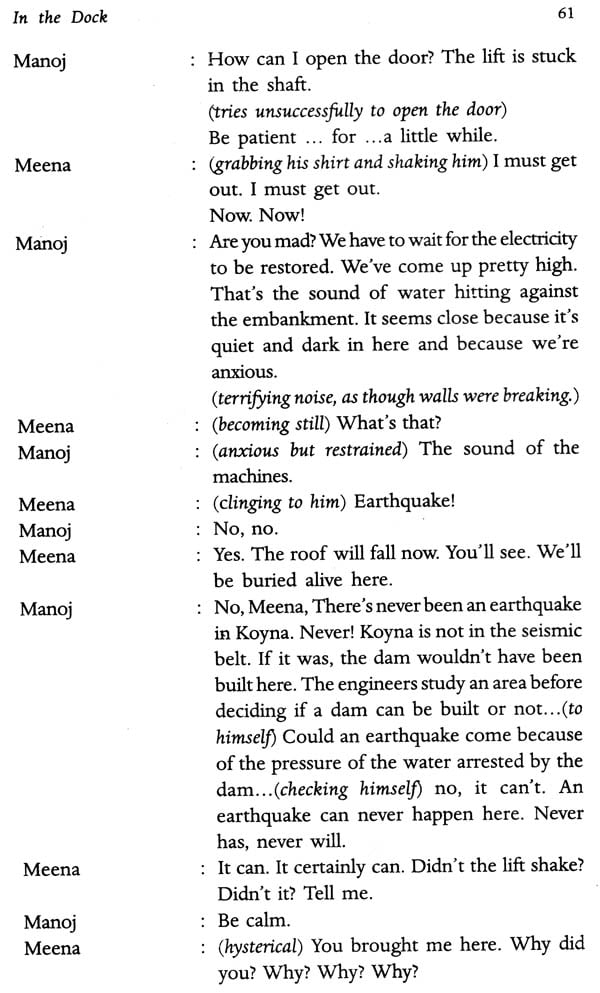 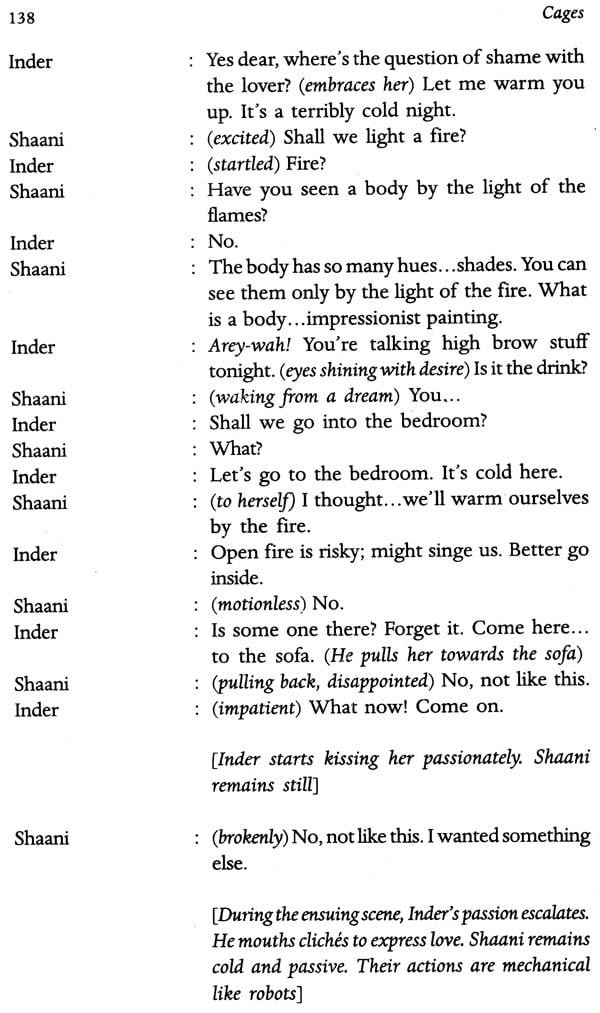 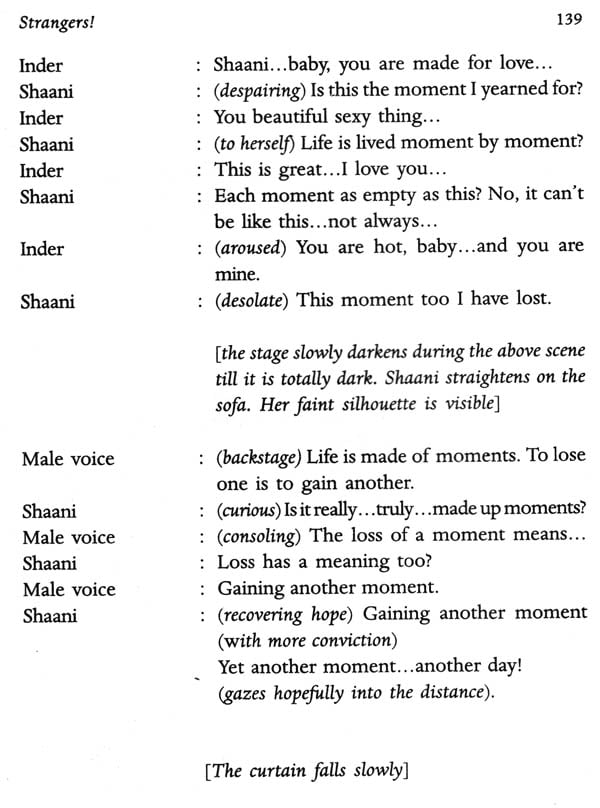 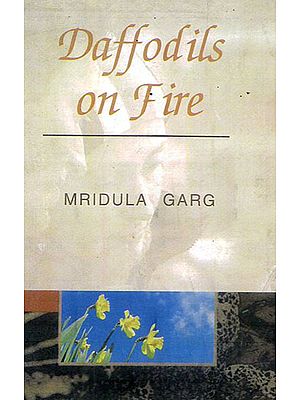 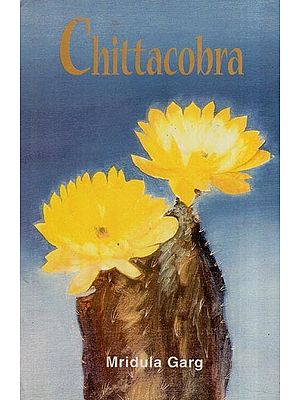 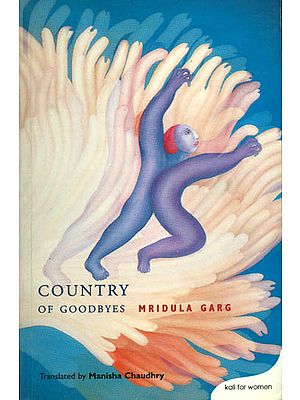